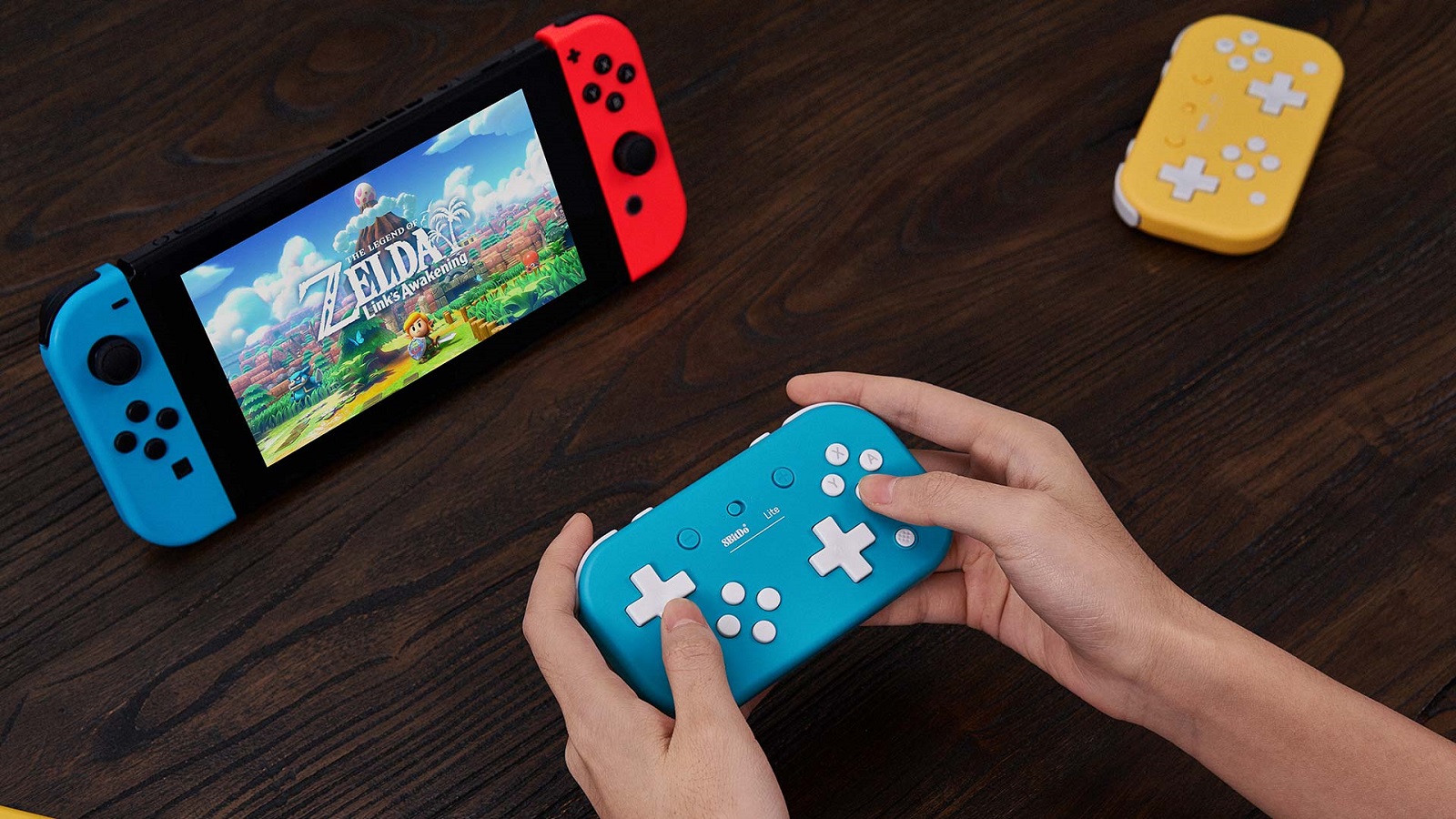 I don’t know why, but I fell in love the second I saw the 8BitDo Lite controller announced for the Switch. A tiny little controller (though bigger than the 8BitDo Zero controller) that could play Switch and PC games with Bluetooth connectivity? Sign me up! My favorite 8BitDo Peripheral has been the SN30 due to its dogbone design and light weight, but now I might just have a new favorite to bring with me on road trips.

Like its name implies, the 8BitDo Lite is modeled after the Nintendo Switch Lite family of products, mainly the yellow and turquoise colors. Matching the shades of these two models, the controller complements your design choice should you decide to pick one up. As I have a regular model Switch, I didn’t get to bask in the glory of a color match, but I did fall in love with the overall look of the controller. It’s a flat rectangular design that has a card-like structure to it and weighs a piddly 84 grams. While that sounds pretty light (and it is), the whole thing just melts into my hands every time I grab it.

I’m a 6 foot guy with huge hands, and as a result, prolonged play with a Joy-Con held sideways can get a little cramped at times. The 8BitDo Lite miraculously doesn’t have this problem, as its small size is still larger than the average single Joy-Con; this means that I can reach all the buttons without much trouble. As a nice little bonus, all of the buttons of a Pro Controller are here too, which means I can finally chuck out my SN30 in favor of this; a neat little touch is having the L and R buttons arranged so that I can easily reach the SL/SR buttons instantly. The face buttons have a nice click to them, and they feel right at home with fighting games. You can also switch from Switch games to PC inputs with the flip of the switch on the top of the controller, and you also have home and screenshot buttons too. 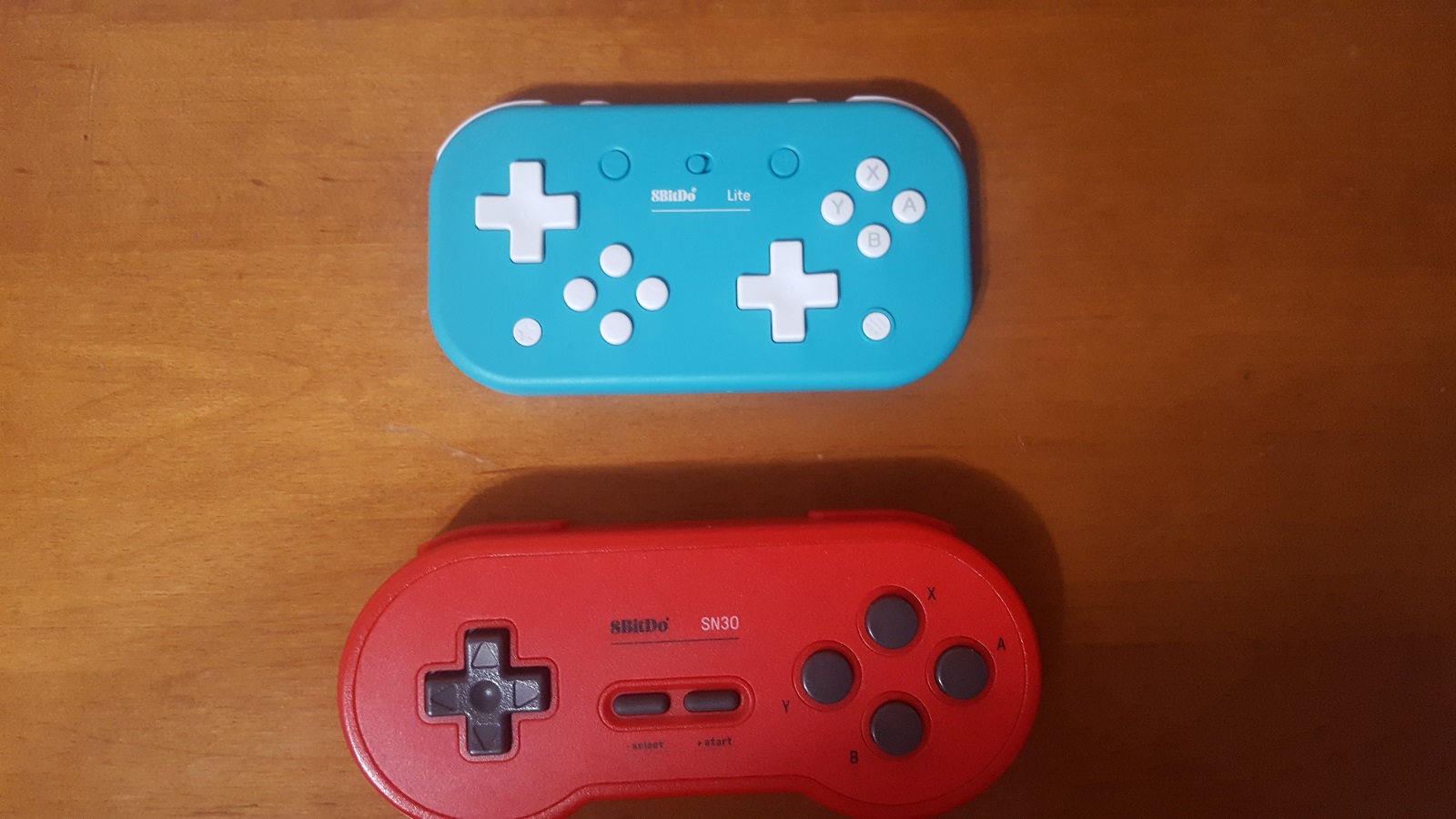 Comparison of the 8BitDo Lite (top) with the SN30 (bottom),

Connecting is relatively simple on the Switch, as you can either plug the controller into the console via USB-C or through wireless connection. It’s painless and works quicker than other 3rd party wireless controller alternatives I’ve tried in the past.  The battery life is superb too, lasting around 18 hours on a 1-2 hour charge. I haven’t charged my controller since I first bought it, which is a testament to its battery life. All in all, it’s a near perfect controller that I would universally recommend.

Then you get to the analog d-pads. 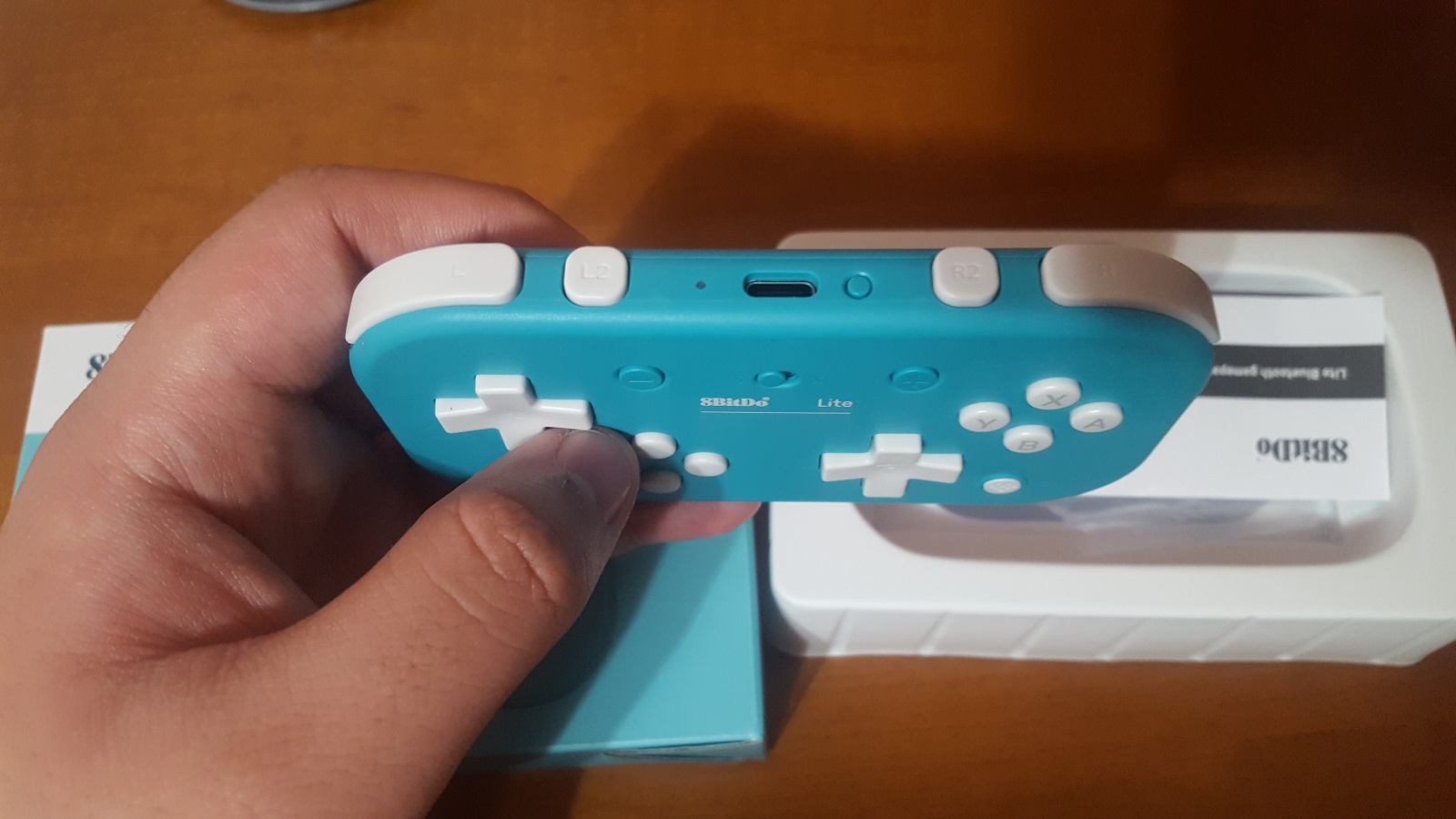 The biggest feature that the 8BitDo Lite offers is the fact that it has replaced the analog sticks of the Pro Controller with two d-pads. Sure, this looks pretty weird and will garner a few stares from the public eye, but in practice, it works wonderfully. The main draw was for games that would be better with d-pad motion but were restricted to analog stick movement (such as The Legend of Zelda: Link’s Awakening or even indies like Inversus Deluxe). It seems that 8BitDo has heard your prayers, as the d-pads work exactly like analog sticks, except now without the possibility of the dreaded Joy-Con drift. While I didn’t have a copy of Link’s Awakening handy, I did test the controller on Blazblue Cross Tag Battle and Tetris 99, and this baby worked like a charm. This controller is perfect for 2D fighting games, as you can input combos with ease thanks to the reliable feedback of the d-pad, while Tetris 99 makes targeting opponents more accurate thanks again to the d-pad. Basically, if there are games that need pixel perfect movement, the 8BitDo Lite is more than up to the challenge.

While this controller does technically work on all games, it underperforms on those that need more sweeping movement of the analog stick. It’s basically inoperable on something like Katamari Damacy Reroll, as the d-pads get in the way of each other and the Price of All Cosmos just scurries around left and right. Super Monkey Ball: Banana Blitz HD is a little better, as you can control your monkey in erratic movements, though I wouldn’t recommend playing the game with this for long periods of time. Super Smash Brothers Ultimate works decently, but I would be more comfortable with characters that utilize a more rigid set of directional moves, like R.O.B., Ryu, or Terry. 3D platformers don’t benefit too much from the layout of the 8BitDo Lite, but they are all playable. Just make sure to temper your expectations. 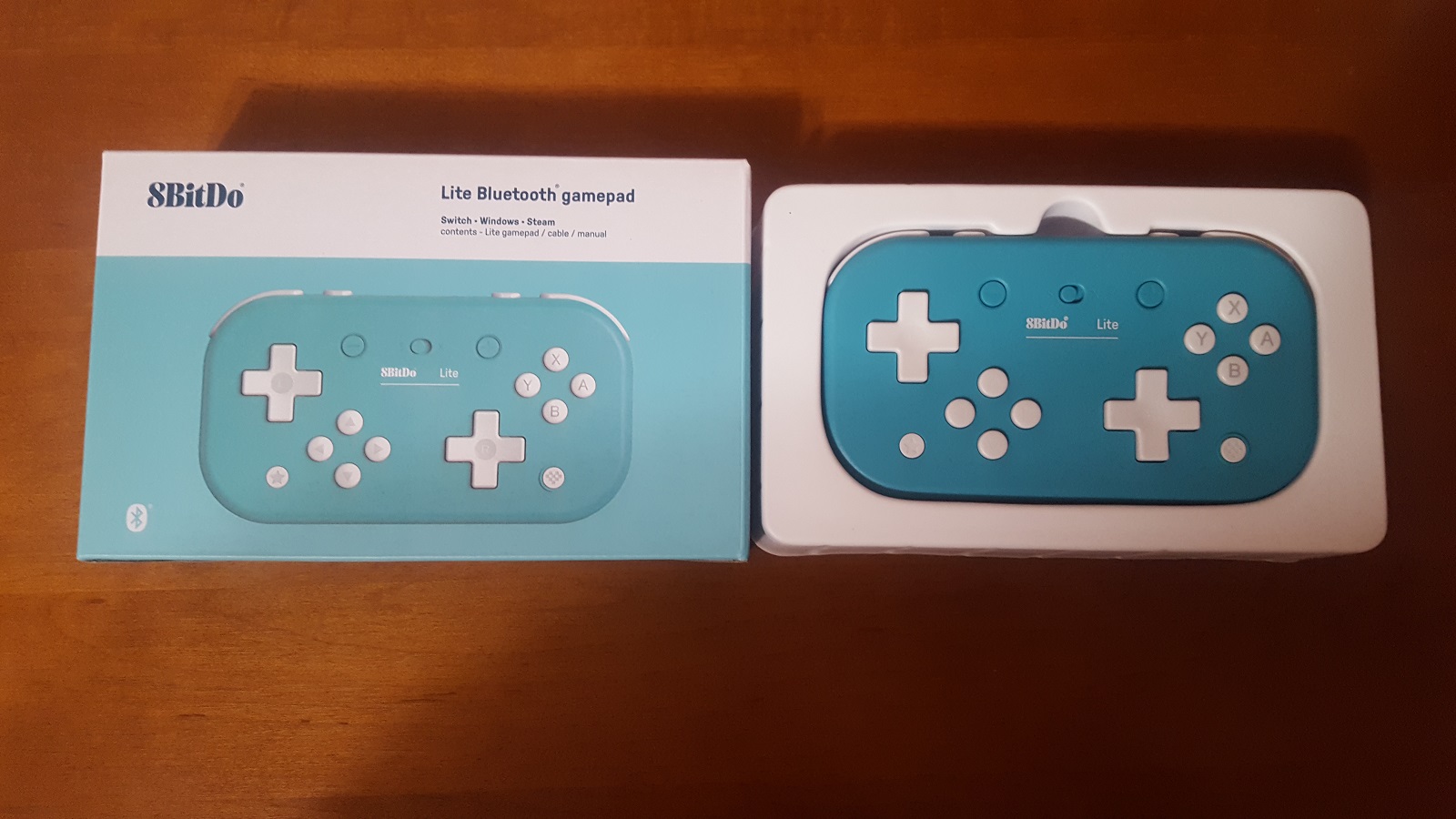 If there are qualms that I have about the controller, it’s the fact that the lack of extra bells and whistles like gyro controls or rumble can make it feel a bit hollow at times. The lack of rumble is especially noticeable in a game that uses it, though it’s a small price to pay for a super thin package. Also, there’s a weird thing that the controller can’t turn on the Switch console itself, so you have to physically turn on the console from the dock in order to use this controller (even if paired). It’s a problem that almost all third party controllers have, so I can’t fault the 8BitDo Lite for that, but it would have been cool for the ability to wake up the console using the controller’s home button function. The price is perfect for a stocking stuffer, as the $24.99 price point makes it totally irresistible as an impulse buy.

The 8BitDo Lite is the perfect gift to get your Nintendo fans this Christmas. From its excellent design and innovative dual d-pad scheme to its slim design and surprisingly affordable price point, this is a third party controller that everyone should get this holiday season.

Elisha Deogracias is an aspiring accountant by day, freelance writer by night. Before writing for Gaming Trend, he had a small gig on the now defunct Examiner. When not being a third wheel with his best friends on dates or yearning for some closure on Pushing Daisies, he's busy catching up on shonen manga and wacky rhythm games. Mains R.O.B. in Smash. Still doesn't know if he's a kid or a squid.
Related Articles: 8BitDo Lite, Hardware
Share
Tweet
Share
Submit