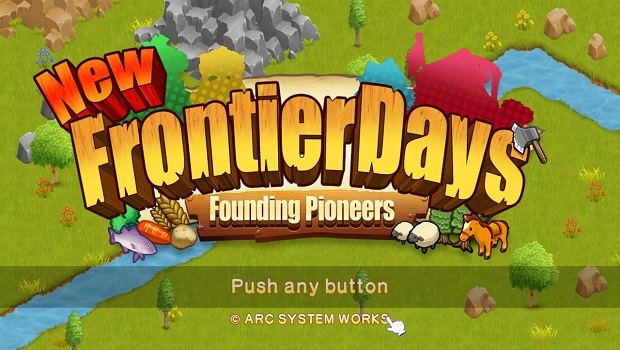 I’m not sure why, but I feel like there’s a firm niche in the  market for farming games. From Harvest Moon to Farmville to Farming Simulator, we just can’t get enough of them, can we? While the Nintendo Switch is still in its infancy, we’ve been treated to New Frontier Days: Founding Pioneers in the eShop to fill in the simulation void of the console. Is this a game that milks just the right amount of entertainment, or is it an udder chore?
Right off the bat, New Frontier Days drops you into one of three modes: story, survival, and free. The main story mode tasks you and your helper Jessica with creating a thriving town in a quaint little plot of land. To do this, you take control of a few pioneers whom you command to do your bidding. Slowly, you’ll make campfires to roast fish, fields to plant wheat, and sawmills to process wood. After a set amount of money is earned, you can advance to different ages, which will grant access to more buildings and obstacles. The main game is over if you end up losing too much money within two consecutive years, stall too much in advancing ages or if you lose all of your pioneers due to animal attacks, but those issues are, for the most part, negligible.

Grammatical error aside, thankfully this situation only occurs in the survival mode.

As this is a simulation title, you will control your pioneers to do your bidding as they collect materials and tidy up the land. By pointing at where you want to go, you can make them hunt for wild boars, mine stones, or perform other assorted actions. While you can control the game docked or in handheld mode, I preferred the latter due to how New Frontier Days handles character selection and actions. It feels suited for handheld play, and using the Joy-Cons with the grip controller felt a bit awkward and imprecise.
As you continue to build your land, you’ll be equipped with a checklist of development goals you can accomplish, such as adding a certain number of pioneers to your town or collecting a certain type of material. Completing these tasks will grant you development cards with effects such as giving you a pet horse or increasing the value of lumber when you sell it. In addition, there are in-game achievements such as clearing certain story missions or amassing a lot of garbage that will unlock panels in a picture. While completing a picture isn’t necessary to complete the game, it did provide something to replay the game, and the card system does help out in a pinch if you need to scrape up some materials quickly.

Once you get in the swing of things, however, you’ll find that there isn’t too much to do. A majority of the game requires you to wait around for your pioneer to finish their action before doing something else, and even if you do end up amassing a bunch of pioneers, they’ll be limited to a few actions.

The lack of customization kills the experience faster than a pig greased up and running around the farm. There are only a few types of materials you can collect at a time, and only two animals will burden you (a boar that only attacks you when provoked, and a bear that will attack you regardless). While you can level up buildings and facilities to provide other actions, this is basically the only thing you can change.  (You can also change the colors of the houses you build, so that’s something.)

The AI for the pioneers is nonexistent as well; if you command a pioneer to forage for materials, they will only focus on that prime directive, ignoring any bears that can and will kill them. It’s more egregious because they can fight, but you’ll have to separately select this action before they do so. I lost quite a few pioneers due to this, and it’s a bit frustrating to have a hard-working person be mauled in an attack because they couldn’t just whip out a gun and shoot the beast. You can select pioneers to repeat their actions in a building, but since I had to use them to do different tasks, I decided just to select their actions myself.
However, as much as I hated most of the limited mechanics, I did appreciate the presentation of the game. While it feels very Farmville inspired, the aesthetic does match the relaxed nature of the title. It’s nothing remarkable, but the brightly colored graphics and decent music does lighten the experience a bit. In addition to the story mode, you can choose a survival mode that will threaten you with periodic animal attacks depending on difficulty, and a free mode where you can farm without worry. The third mode is probably the one that fits the tone of the game, as you’re no longer pressured to hurry up, and there’s no penalty for doing poorly if you’re not great at making money.

The first simulation title for the Switch, New Frontier Days: Founding Pioneers is a mixed effort with a barnyard full of blusters. It’s a decently priced romp at $9.99, but its lack of customization and odd control scheme may turn off those who want a quality farming game.

Elisha Deogracias is an aspiring accountant by day, freelance writer by night. Before writing for Gaming Trend, he had a small gig on the now defunct Examiner. When not being a third wheel with his best friends on dates or yearning for some closure on Pushing Daisies, he's busy catching up on shonen manga and wacky rhythm games. Mains R.O.B. in Smash. Still doesn't know if he's a kid or a squid.
Related Articles: New Frontier Days: Founding Pioneers
Share
Tweet
Share
Submit