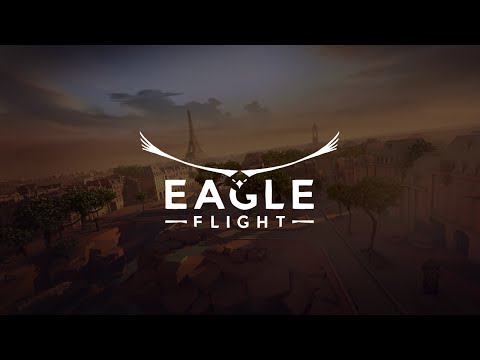 I remember handing my mother a NES controller and then laughing as she bobbed her head and dodged the 8-bit pixels on the screen. We’ve come a long way since then, but what I didn’t know was that my mom was onto something. Eagle Flight, the first VR title from Ubisoft, uses exactly that mechanic. Imagine my surprise…

Eagle Flight puts you in the talons of a hatchling eagle. Emerging alongside your brother, you crack the shell and join your parents in a world 50 years after all humans have vanished. Your nest is perched atop Notre Dame, surrounded by some of the most iconic landscapes in France. Taking your first steps from the roost, you leap from the edge and take flight.

VR is difficult to describe at times, but a game about flying makes words largely insufficient to capture the experience. The control scheme is simplicity itself. Turning your head allows your eagle to turn slowly, but tilting your head banks the majestic eagle in that direction. Looking up or down allows you to soar into the clouds or dive towards the ground. The triggers spread your wings to soar, slowing your speed, or fold them back for maximum speed. Beyond a single button that emits an eagle cry, that’s all of the controls. What this means is that Eagle Flight can intuitively be played by anyone. I tested this theory by having my wife play the game.

My wife, Laura, reviews some games, mostly music titles, but the controller is not her specialty. She still struggles a bit with controlling the camera with one thumbstick and movement with the other. With Eagle Flight’s brief tutorial under her belt, she proceeded to bust through the first 15 of the included 23 missions in a single continuous play session. Put simply, my wife never plays games for an extended period of time. I was shocked with what came next.

Soaring back to the home nest, she logged out of the single player mission and proceeded directly into multiplayer. Teaming up with other eagles (you can play up to 3v3) and even soaring out on her own, she proceeded to dominate the sky. The intuitive controls made her lethal.

Eagle Flight has a few tricks up its sleeve to help combat motion sickness. I was able to play for extended periods without nausea, and I think a lot of it has to do with the vision system and frame. The whole play area is framed with feathers, and a beak protrudes from the bottom of the screen. This simple static object allows your eyes to have a constant object of reference. When you tilt your head, the game narrows your vision a little bit in the direction you are turning, again, providing a stationary black frame around the action. It works remarkably well, and I experienced no nausea despite the speed at which this game moves.

The storyline, told across 23 missions, is simple. As a hatchling you learn to test your wings. As you grow, you learn to hunt for yourself, swooping in to catch fish as they leap from the Seine river and surrounding waterways. Able to hunt and feed yourself, your next mission is to impress a mate. Picking up feathers in the environment, you’ll build a nest and defend it against predators as you look to grow your own family. Through exploration you’ll catch food in the various byways of the abandoned city, with your ultimate goal being to build a nest atop the Eiffel Tower, a master of your domain.

Running the rings is more fun than it sounds.

Each mission is set up as a time trial. It reminds me of games like Pilotwings, which is high praise indeed. Some missions you’ll hunt fish or prey, other times you’ll engage in aerial dogfights with avian foes. Exploration reminds me of (yes, I’m old) Sewer Shark on the Sega CD, as we dodged obstacles in the environment, uncover hidden passages, and use the wind currents to reach blistering speeds. Success in a timely fashion can earn you up to three stars. These stars unlock Expert versions of those same missions, providing additional challenge once you’ve mastered the basics.

Ubisoft has looked to create a highly-accessible VR title, and to that end, the next mission in the story sequence (other than Expert versions) are unlocked by simply completing its predecessor, even if it’s with a single star rating. Leaderboards are displayed every time you complete a mission, so there’s always a competitive carrot, but anything beyond that first star is entirely optional.

Missions are classified from Easy to Hard, with higher rungs on the mission ladder requiring a bit of skill or memorization. Navigating the catacombs and abandoned subways requires a bit of trial and error, and perhaps some memorization. As there are no checkpoints, you’ll occasionally have to be perfect for minutes at a time. As Paris has been abandoned for 50 years there are holes, cracks, and pass through spaces everywhere, begging for you to dart through. It’s a rush made only better when you succeed.

I only have a few complaints with Eagle Flight’s roughly six hour runtime. All of the catacomb runs are trial and error, the graphics occasionally feel a little jagged, and the intro voice explanation can’t be skipped. None of those create enough of an issue to dissuade me from recommending this as a fantastic example of what’s possible in Virtual Reality.

Multiplayer, as I mentioned before, is a PvP affair. With up to six players, three to a side, you square off to obtain the only thing that matters in the animal kingdom — food. With a little rabbit or deer carcass identified in the environment, both teams scream towards their target. Eagles are by no means defenseless, but the game gives them an Eagle Screech skill that “pops” the enemy, turning them into a puff of feathers if you can hit them with the emitted orb. You can also hit a button to create a short-acting temporary shield, allowing a player to deflect a single hit from the enemy. This can be used offensively, blasting through an unsuspecting foe, but that same enemy can also press and hold the free look button to look behind them, screeching at their pursuer.

The single-player game occurs in an open world. Progressing through the story unlocks five locations in Paris, allowing you to place a nest there. There’s little point to the nests, sadly, but it does create a perch to look around. The two collectables (fish and feathers), can be spotted from above, usually, indicated by a telltale ripple in the water or a giant white feather. Each borough has 20 of both to find, and like Crackdown, they make a distinct sound when you are near. Collecting them happens fairly naturally as you gain skill zipping through the tight street corridors and overgrown vegetation branches.

Eagle Flight transcends its simple concepts, bringing the world of flight to life in a way I could not have expected. With incredibly intuitive controls it is accessible by any audience, and all without nausea. If you own a PSVR, Eagle Flight is a must-have.

Ron Burke is the Editor in Chief for Gaming Trend. Currently living in Fort Worth, Texas, Ron is an old-school gamer who enjoys CRPGs, action/adventure, platformers, music games, and has recently gotten into tabletop gaming. Ron is also a fourth degree black belt, with a Master's rank in Matsumura Seito Shōrin-ryū, Moo Duk Kwan Tang Soo Do, Universal Tang Soo Do Alliance, and International Tang Soo Do Federation. He also holds ranks in several other styles in his search to be a well-rounded fighter. Ron has been married to Gaming Trend Editor, Laura Burke, for 21 years. They have three dogs - Pazuzu (Irish Terrier), Atë, and Calliope (both Australian Kelpie/Pit Bull mixes).
Related Articles: Eagle Flight
Share
Tweet
Share
Submit