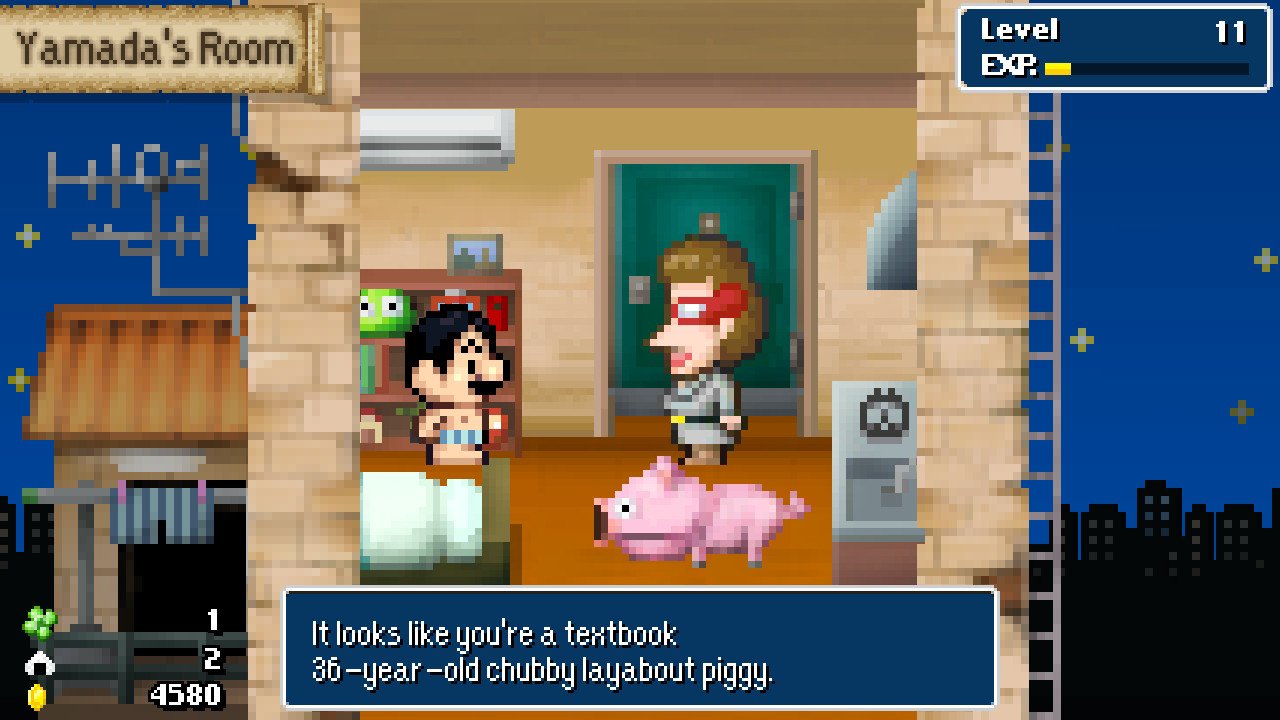 As much as the practice is controversial, I really enjoy a lot of mobile games that have migrated to the Switch. From Implosion to Timberman, there’s something about the console that makes developers release definitive versions of their portable games to the hybrid. Recently discontinued mobile game Dandy Dungeon: Legend of Brave Yamada is one such title, and it brings the quirky slice of life/fantasy story with its simplistic yet addictive gameplay to the Switch, with some amazing results. 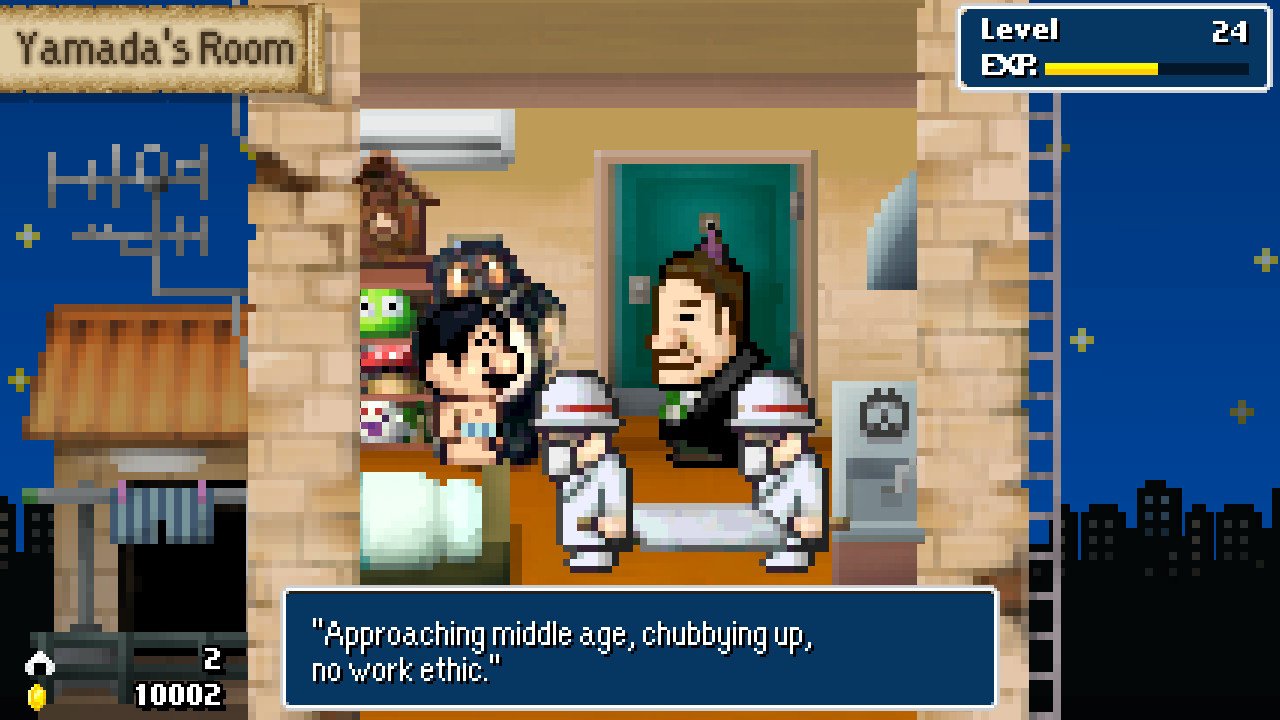 Dandy Dungeon stars Yamada-kun, a 36-year-old aspiring game developer that has no drive to continue working at his soulless corporate job. After stumbling across a girl named Maria, he gets inspired to code his life events into the game he’s working on. Unfortunately, while working on his game, he gets fired from his regular job and has to deal with the Chairman of the company as well as his children, all the while making the perfect dungeon crawler. To be completely honest, the story is bonkers and a pretty nice complement to the core gameplay loop; it doesn’t take itself seriously at all, and the characters all have their quirks.

The reason for this is the game itself: Dandy Dungeon has two main sections, the real life overworld and the game world. In the former, we get to see Yamada-kun, wearing boxers and nothing else, coding on his computer. It’s here where the narrative of the game takes place, with a variety of people barging into his apartment and talking with him. Depending on the context, he will be inspired to code what is happening in the real world into his game, thus creating things like NPCs, dungeons, and items that can be obtained. I did enjoy how the game’s story is fed piecemeal like this, as it grants a sense of progression (and it’s a nod to how the original mobile game would give you parts of the story at a time). 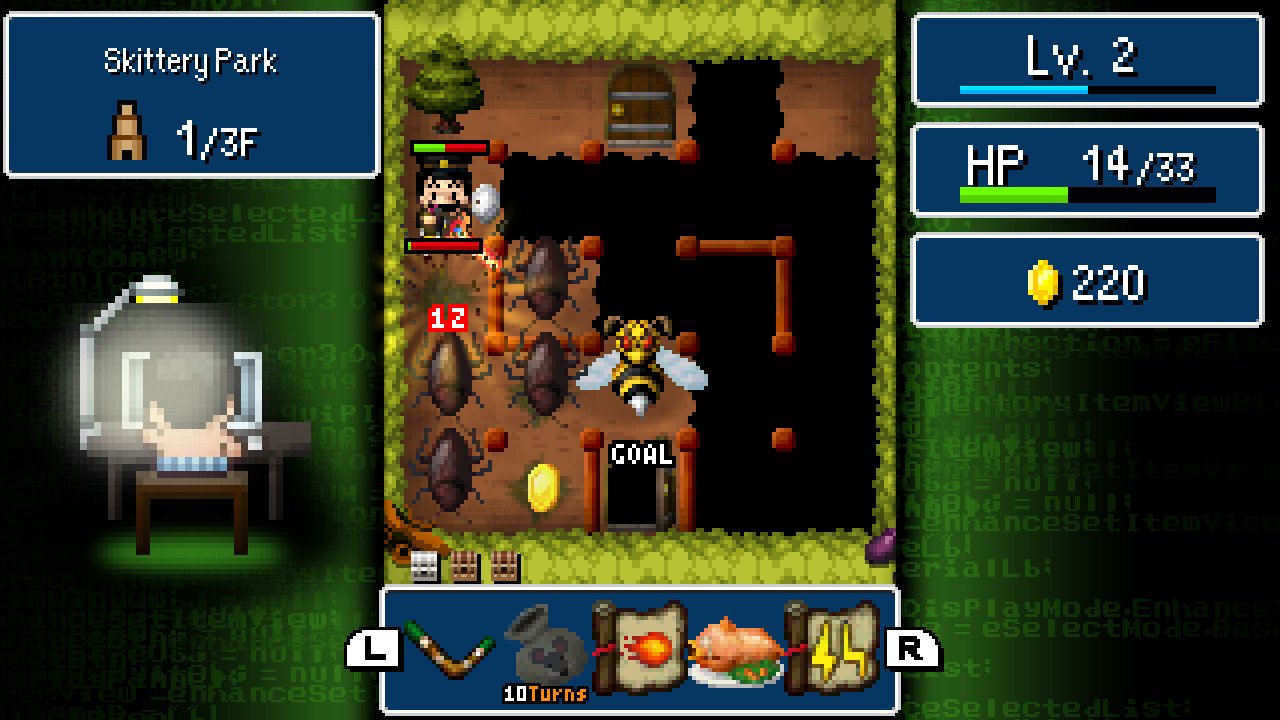 The characters are pretty funny, with Yamada-kun being your typical loser type character who’s smitten about a girl he just met. The supporting cast of baddies is eccentric and memorable, from an otaku moocher that you pay in-game currency to get some loot to a dominatrix-themed villainess that has an army of pigs she whips to attack you. (Yeah, that sentence was weird, but so is this game!) Each character is quirky and contributes to the tongue-in-cheek nature of the game, which has a sparse but hilarious script.

The game portion frames itself as you beta testing Yamada-kun’s creation, as you face monsters and other enemies as a knight-looking avatar of himself. The gameplay translates well to the Switch, as it has been tweaked to accommodate the console. There are dungeons that you must traverse, with each of them having a set number of floors in a 5×5 layout. Your goal on each floor is to get to the exit, which also means plowing down enemies and furnishings along the way. You have one stroke to get him to the exit, and while the game rewards you for exploring (and breaking) all the tiles, there are still times when you might want to head straight to the exit, say there’s an unwanted enemy you don’t want to face or there are traps that will impede your progress. That being said, you do want to try and explore as much as possible because at the end of each floor, any unused panels that don’t have an enemy or furnishing will turn into a flame and hurt Yamada-kun (and yes, you can die if you summon enough of these flames). 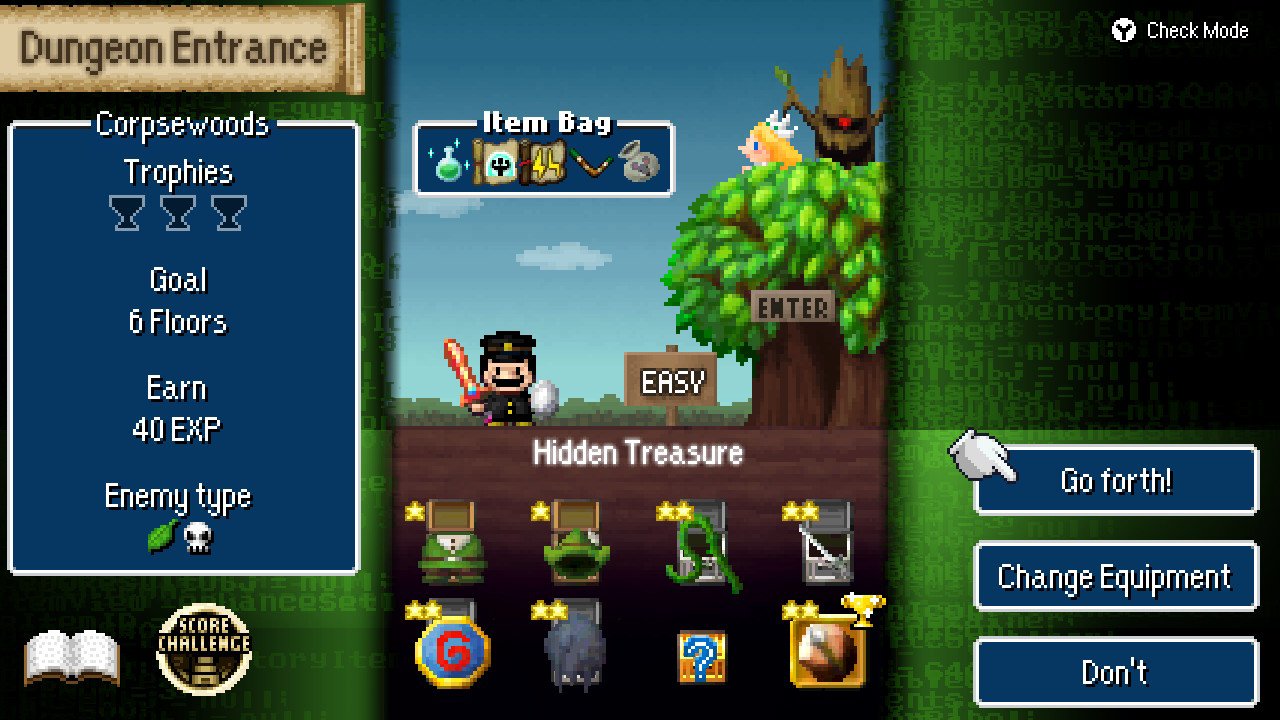 After your plan is set, Yamada-kun will automatically run, and will fight anything that gets in his way through auto-attacking. You can also activate items that will trigger effects like magic or healing, but every item in this game has a finite amount of uses before breaking into useless material. In addition to this limit, each item has a cooldown timer which prevents you from using the same item consecutively for a set amount of turns. Turns here are defined as one attack or one tile movement, so you won’t have to wait a long time to select an item again.

Should you perish in battle, you’ll have the option of using a (very rare) rice ball to revive yourself, lest you get kicked out and have to try again. The downside of the latter approach is that you don’t get any loot or gold earned, and your item usage is tracked, meaning your items are exhausted quicker. The perishable items mean that there’s a ton of strategy in picking your slate of five items to bring with you (and you can also pick up items on the ground of dungeon floors), and you’ll need to use most items to attack tricky enemy types. At the beginning of each dungeon, you’ll have the option to change equipment and look at what treasure will be included in the dungeon, as well as enemy types (which will designate what their weaknesses are, if any). 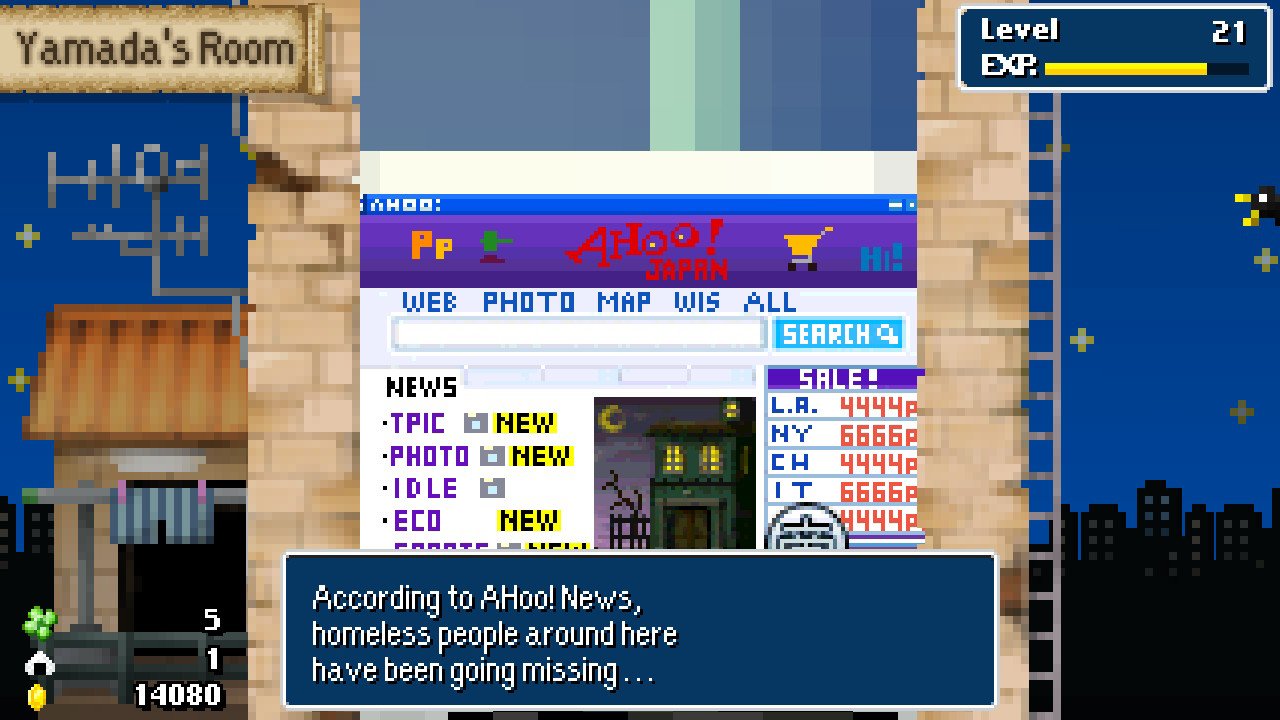 Personally, I adored the main gameplay loop of Dandy Dungeon. It has enough strategy to keep me engaged but also has that mobile addictiveness that makes me want to run another dungeon instance again and again to get better loot. The way movement works reminds me of the puzzle game flow, and each floor essentially acts as a puzzle. Do I try and go for a perfect clear by exploring all the tiles, or should I just make a mad dash to the exit because my health is low and a cockroach will pummel me into the ground? While you do have unlimited time to think about a move and also analyze your enemies, the second you start plotting your movement, a timer starts and you have to quickly draw your stroke. Should you let this timer fall to zero, flames will appear and hit Yamada-kun until he is dead. It’s this pressure that creates a sense of urgency in exploring the dungeons.

Aside from executing which dungeon you’ll explore in the overworld, you can also equip different items and upgrade equipment. You’ll also have the opportunity to spend gold earned on enhancing weapons and armor, or you can even spend gold and obtainable lucky clovers on common and rare items, respectively. While you will obtain a lot of materials in the dungeons, you can also craft and upgrade rare weapons (some of which are exclusive to the crafting menu). It’s a basic system, where you have to obtain the required materials to forge the next item in the chain.

You can also level up certain equipment by discarding unwanted materials for experience, which means you’ll want to stock up on some big-ticket items. I enjoyed how most materials could be found in multiple dungeons, so I could reliably hit up a dungeon that had enemies weak to my current build and playstyle rather than get stuck on an uncomfortable one with enemies that were a pain. Protip: Dungeons with rats are probably the most annoying, as they can steal items or gold and run away quickly. Did it steal your blockbuster scroll (which goes for a pretty penny)? Too bad! 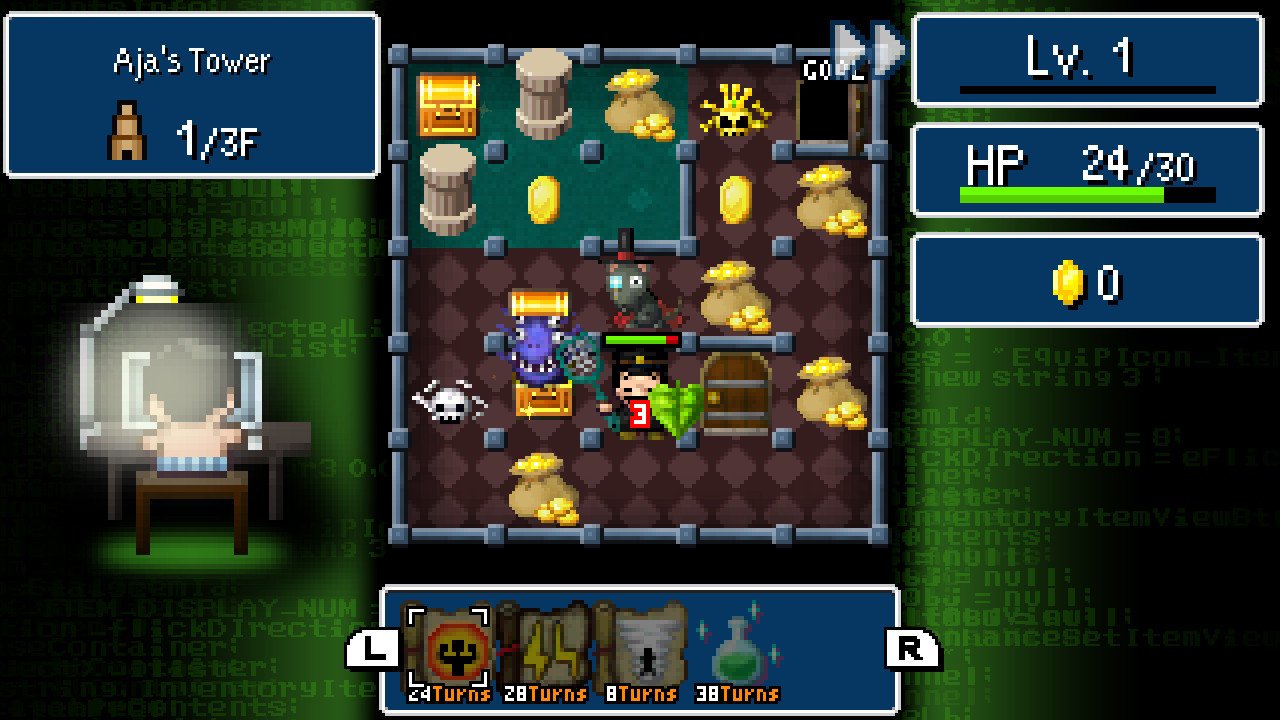 What I didn’t enjoy, however, was the slightly grindy nature near the middle of the game. There comes a point when the enemies become a bit too strong for your current equipment, so you’ll have to take a break and grind on previous dungeons to obtain special material you can only obtain in some places. Due to the random nature of the game, you might spend half a dozen times in a single dungeon just to get a single material for your crafting, only to find out you’ll need to get even more gold to upgrade your item. The grind is a bit alleviated once you reach the Gold Slime dungeon (which grants thousands of gold during each run), but at that point the game’s difficulty ramps up.

This difficulty spike late in the game also exacerbates an issue I have with it: There isn’t much room for error once you set your path. If by the time you realize a mistake or understand that one enemy is a bit too much for your current build, you’re going to end up dying with no chance to recover unless you restart. One instance was with the third boss (the second of the Chairman’s children), where I was stupid and ended up using both of my stored up rice balls on the boss only to get murdered because I neglected to take in consideration that he had a second phase after using all my best items. It took a good 30 minutes to recuperate and get my items back since I had exhausted them all (thankfully, I did reach the aforementioned Gold Slime dungeon so I had no trouble purchasing the items). 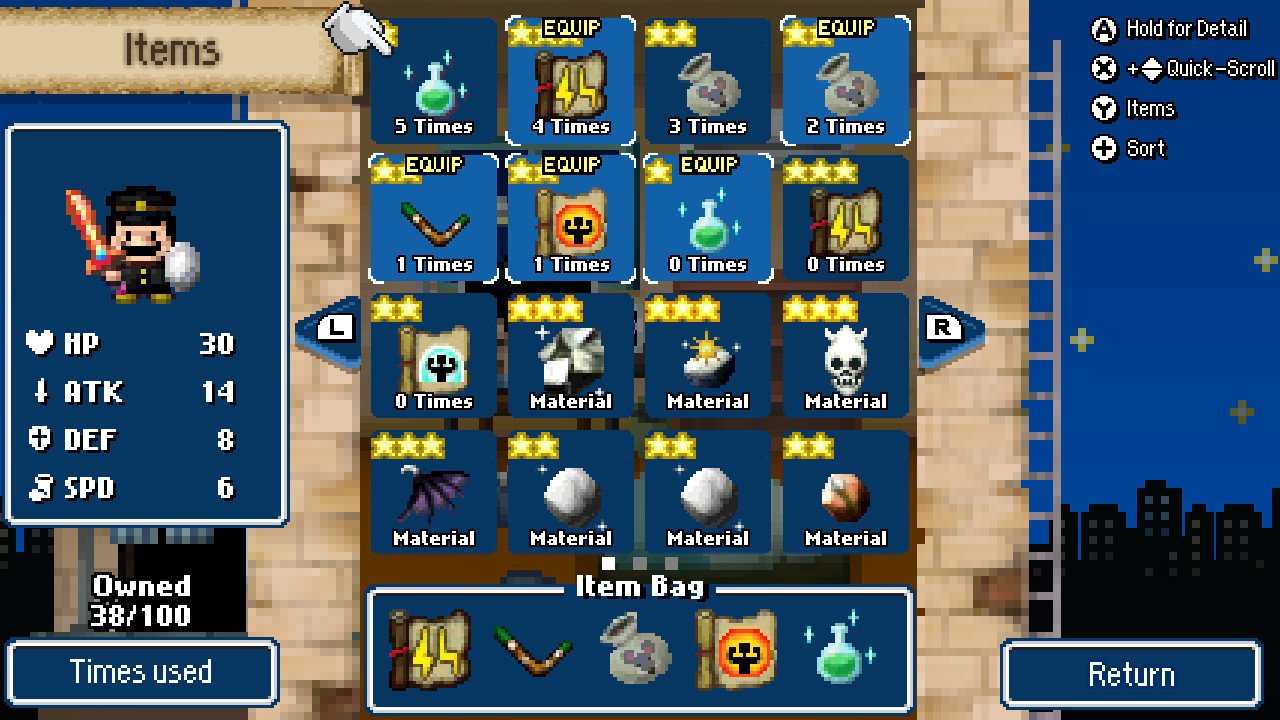 That being said, I do appreciate how complete a port like this is in terms of content. There are no in-app purchases at all, and everything can be unlocked with a little practice rather than being locked behind a paywall. There are artifacts that remind me of Dandy Dungeon’s mobile roots, but they thankfully don’t affect the game as a whole, with only the late-game grinding being an issue. The presentation is a pretty nice one, as it harkens back to the NES and SNES JRPGs of old.

While a little reliant on grinding near the end, Dandy Dungeon: Legend of Brave Yamada is a delightful little tongue-in-cheek RPG with a little heart and a lot of laughs. Its simple yet engrossing gameplay system mixed with fun puzzle mechanics and cute presentation make this a wonderful Switch title to play on the go.

Elisha Deogracias is an aspiring accountant by day, freelance writer by night. Before writing for Gaming Trend, he had a small gig on the now defunct Examiner. When not being a third wheel with his best friends on dates or yearning for some closure on Pushing Daisies, he's busy catching up on shonen manga and wacky rhythm games. Mains R.O.B. in Smash. Still doesn't know if he's a kid or a squid.
Related Articles: Dandy Dungeon: Legend of Brave Yamada, Indies
Share
Tweet
Share
Submit