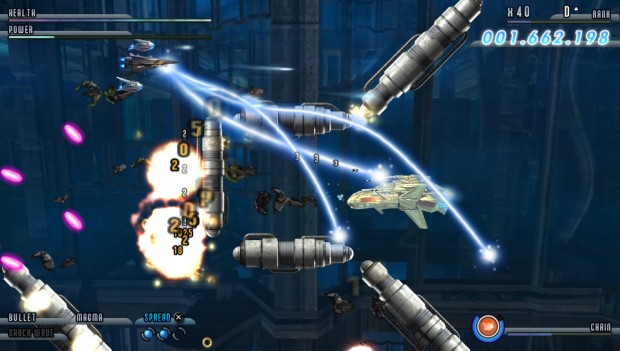 The shoot-em-up genre has become an underappreciated genre these days, but it is one I enjoy going back to. I remember going to an arcade and putting several quarters in the Raiden II machine. I keep the Gradius Collection with my PSP because of the variety each Gradius game provides. Whenever I hook up my Dreamcast to a different TV, I pop in Mars Matrix to make sure it is up and running smoothly. Ikaruga became a classic on the Gamecube and Xbox Live Arcade with the black and white mechanic. Making a good shooter definitely fills a void in a niche genre these days, but it is still a challenge. When I heard Soldner-X 2 became available on the Vita I wanted to try it out, because I really wanted to see if it could bring me back to the old days.

Soldner-X 2 is a horizontal shooter set in a universe where you are flying through space to save the world from an upcoming enemy invasion. Two ships are available with slightly different stats. One flies a bit slower but can take more damage, while the other flies faster. Three weapons are available, with one being unique to each ship at the start.

Each level starts in some part of the galaxy, shooting through obstacles, moving from left to right. Here’s where some of the game’s issues start to show up. The foregrounds are fine, and you can definitely tell which enemies need to be shot. However, the backgrounds are dark and bland. If you don’t look for them, you won’t really see what each one looks like and what the differences between each level is.

The colors of the foreground are bright, lighting up the screen. Shooting the weapons light up the screen, and the different weapons give much different lighting effects. However, you need to pick up a few power-ups before you feel like you are effective against any of the ships. Until then, the weapons feel like glorified pea-shooters that explode like a firework.

After shooting certain ships, power-ups float around to be picked up. The power-ups don’t look all that different from some of the bullets that you need to avoid. Not only that, but trying to figure out what the power-up does and if you do want to pick it up at that time is difficult because of their in descript shape. They could have used more differentiation.

The boss battles are hit and miss. Fighting against a boss that looks like a knight is a unique experience. Other bosses felt like the machinations that if faced in other shooters, but lacked the personality to make them interesting. The developers created a boss with a giant head and a hand that barely pokes past the bottom of the screen that they could have done so much with. Instead, the battle turns out to be a bore because it doesn’t do much or make any real use of the hand.

One level included an area where the screen scrolled towards the top instead of towards the left. When I saw this I felt that I was in store for some great innovations throughout the game. Instead, I waited to find more, and while a few flashes of innovation glanced across the screen I was mostly left wanting.

At first, four levels are available. To unlock other levels several keys need to be found throughout the levels. Unfortunately, those keys also look like those power-ups, and you’ll need to fly through the entire level to get any missing keys. It feels like a cheap ploy to extend the life of the game.

Speaking of the life of the game, it isn’t a long game by any means. Granted, expecting an eight-hour epic for a shooter would be unrealistic, but the levels need to be more interesting to make me want to fly through them again.

Maybe I am being too critical of a game that costs $10, or $13 with additional DLC. I appreciate that Soldner X-2 was released for the Vita and fills a niche for the system. However, it’s still hard to recommend this game except to the most hardcore of shmup fans with a Vita. If you are in desperate need of a new game for your Vita, there are worse choices out there. However, you need to go in with the expectation of a low-frills shooter with glimpses of innovation before making that purchase.

While not working as a Database Administrator, Keith Schleicher has been associated with Gaming Trend since 2003. While his love of video games started with the Telestar Alpha (a pong console with four different games), he trule started playing video games when he received the ill-fated TI-99/4A. While the Speech Synthesizer seemed to be the height of gaming, eventually a 286 AT computer running at 8/12 Hz and a CGA monitor would be his outlet for a while. Eventually he’d graduate to 386, 486, Pentium, and Athlon systems, building some of those systems while doing some hardware reviews and attending Comdex. With the release of the Dreamcast that started his conversion to the console world. Since then he has acquired an NES, SNES, PS2, PS3, PSP, GBA-SP, DS, Xbox, Xbox 360, Xbox One S, Gamecube, Wii, Switch, and Oculus Quest 2. While not playing video games he enjoys bowling, reading, playing board games, listening to music, and watching movies and TV. He originally hails from Wisconsin but is now living in Michigan with his wife and sons.
Related Articles: Soldner-X 2: Final Prototype
Share
Tweet
Share
Submit