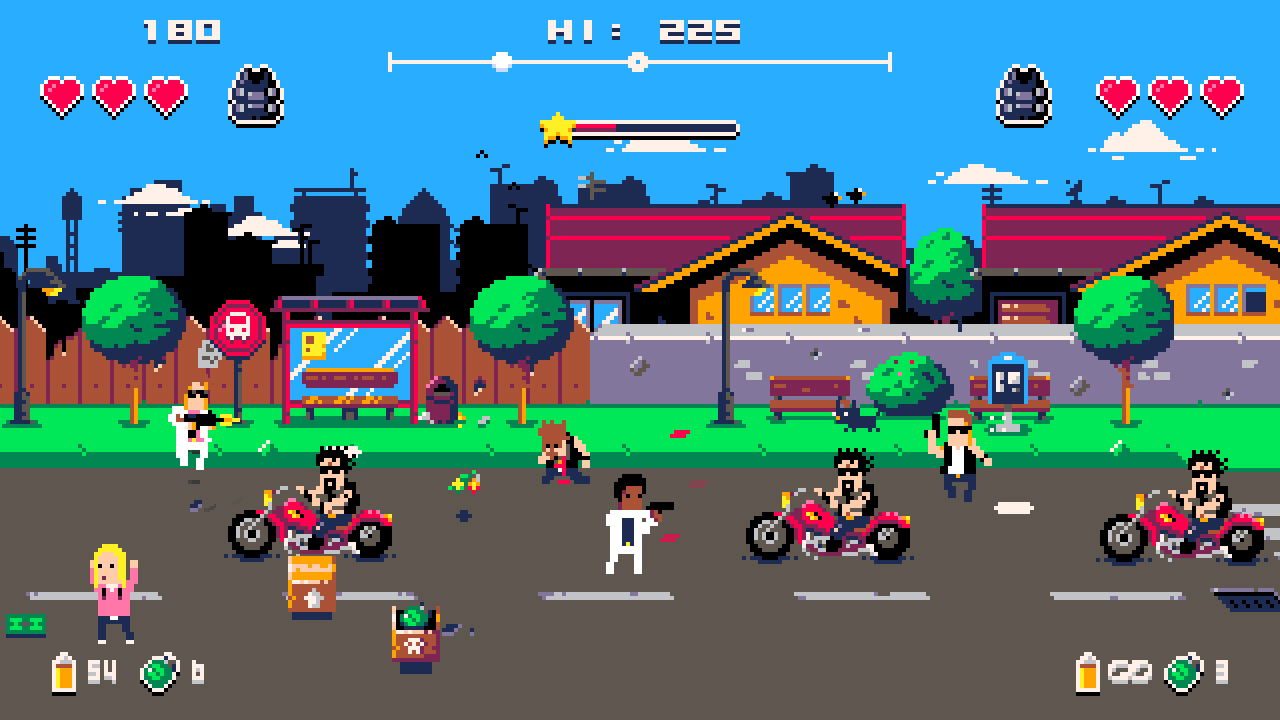 Like retro inspired shoot ‘em ups where you indiscriminately fire increasingly powerful weapons at everything within your vicinity with no regard to the safety of others? Well then you’re in luck as Donuts ‘N Justice allows you to do just that in a wildly over the top shooter that unfortunately ends almost as soon as it begins.

You take on the role of either Mike Riggs or Nick Gordon (or both, if you choose to play couch co-op with a friend) on a mission to rid the world of a wide variety of bikers, ninjas, shirtless men wielding katanas, men in black, punks, Terminator lookalikes with powerful lasers, and donuts – yes, donuts.

Donuts ‘N Justice never takes itself seriously for even a moment and is all the better for it. The game begins with all out chaos and continues ramping up in difficulty for the entire 15 or 20 minutes it takes to blow through the campaign. 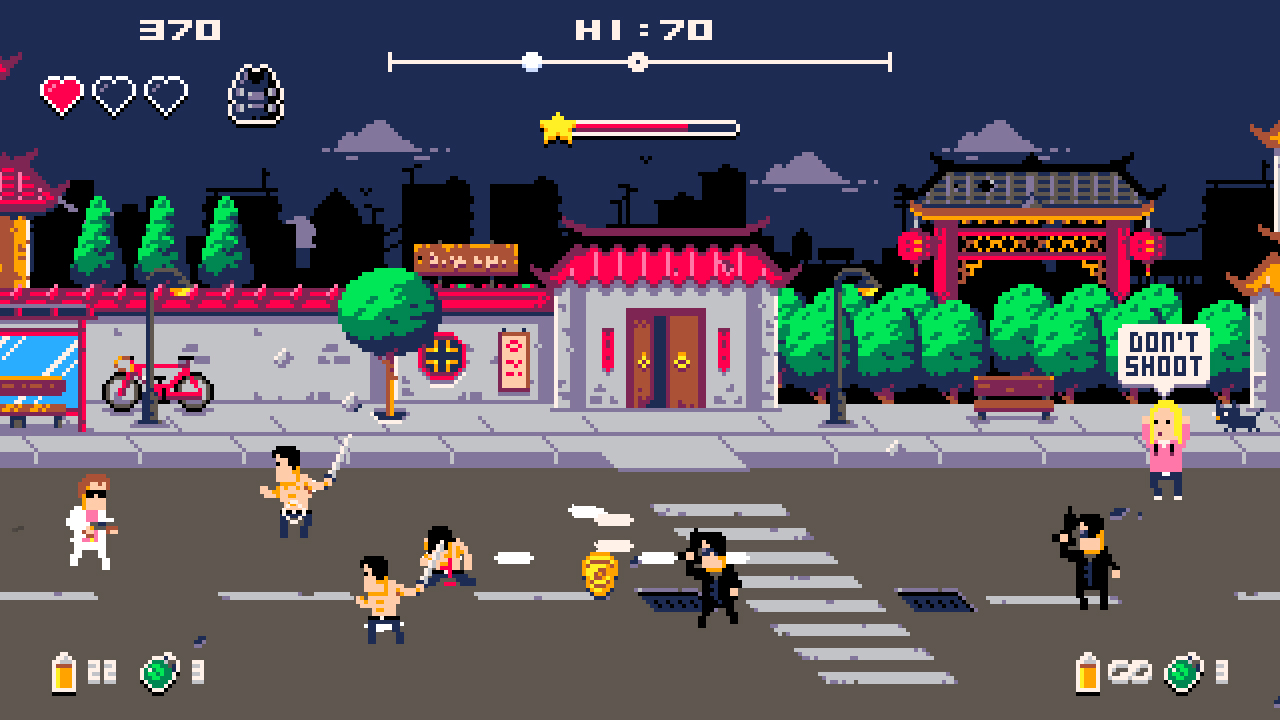 The gameplay is simple – you press one button to shoot left, another to shoot right, and another to toss a grenade. That’s it. Sure, you can move up and down, left and right, but you can only shoot either right or left at any given moment so you must position your character exactly where you’d like them to shoot. This isn’t as frustrating as it sounds as it is required to constantly move around the screen just to survive, so you’ll most likely be wildly pressing the shooting buttons nonstop anyway.

You begin with a set of armor and three hearts, armor and hearts are drained by taking shots – how quickly they drain is based solely on the difficulty level you choose. Normal is the default difficulty and sees you losing one heart per hit, while Thumbsucker is easy mode and only takes half a heart per hit. Finally there’s Nuck Chorris mode and well – good luck with that one. If you can beat the game on that difficulty, then you’re a better player than I am. 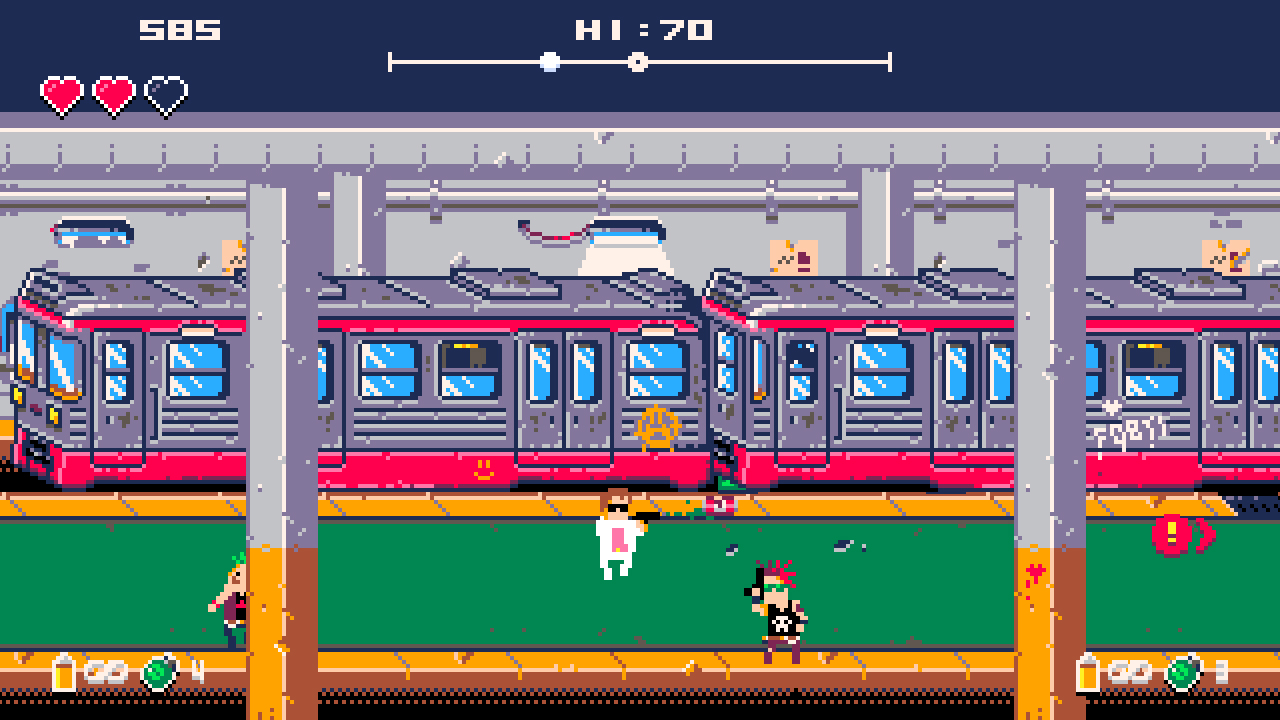 Players begin with a basic pistol and a few grenades, but will quickly upgrade their arsenal. Upon death enemies will drop either a pink donut which refills one of your hearts, a green donut which slows down the chaos on screen, a badge which is required to unlock new items, a power up which improves the strength of your currently held weapon, money, or a box which will contain a random weapon drop drawn from the weapons you have unlocked.

Collecting badges is essential to unlocking new and more powerful weapons like the 44 magnum, flamethrower, and shotgun. While each badge collected doesn’t unlock an item on its own, collect enough and you’ll unlock the next tier of weapons, which will then make subsequent playthroughs easier as you’ll now have the possibility of an enemy randomly dropping the magnum or shotgun early on, letting you blast through large groups of enemies while remaining relatively unharmed or giving you an advantage during boss fights.

While you are welcome to press the fire buttons and never worry about what you’re hitting, there are a few bonuses at the end of levels for sparing civilians caught in the line of fire. Unfortunately, civilians have a knack for running right into the line of fire, especially during moments when you’re being attacked from both sides by swarms of enemies. Still, they can take a few hits and still survive, so it is relatively easy to keep them alive. 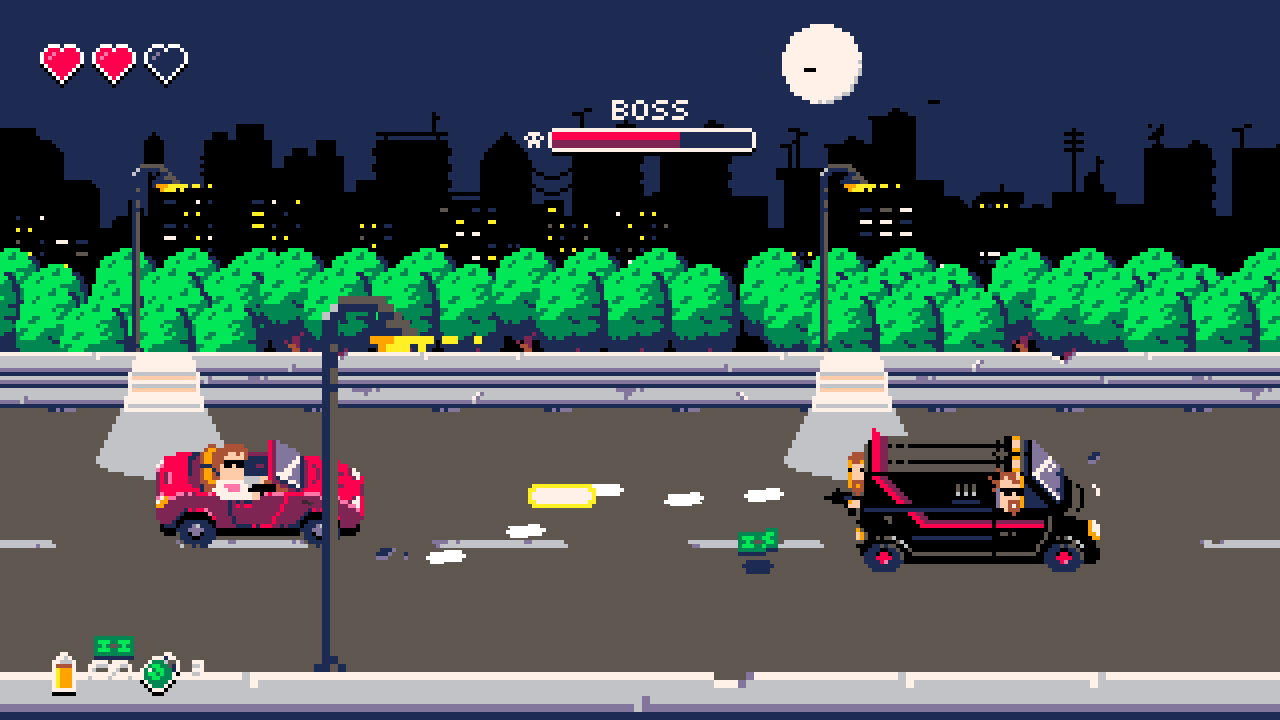 After completing each level you’ll enter a boss fight which, while fun, wasn’t up to par with the levels themselves. The game works best when it throws more enemies at you then you can easily take down and bosses aren’t typically aggressive enough to give you much of a fight – aside from one boss that did feature two enemies attacking at once which may prove difficult for solo players.

The game can be tackled solo, but I found it to be much more engaging with a friend. Couch co-op is available, although oddly the 2nd player can’t hop in until you’ve begun the first level, which led to me spending quite a bit of time confused as to why my wife couldn’t join my game before giving up and starting a level only to then see “press any button to join” appear in the top right. Also, there is one car based boss fight where, interestingly enough, the 2nd player disappears and cannot participate, but will show up immediately once you progress.

Aside from the base game there is a Boss Rush mode which unlocks after completing the main campaign and an item shop where you can buy various hats for your characters using money dropped by enemies. The hats are cosmetic only, but I always enjoy throwing on a top hat and mowing down hordes of enemies, so I had fun switching it up from time to time.

Donuts ‘N Justice is almost painfully short, but thankfully is loaded with tons of replayability. After completing my first playthrough I had only unlocked four out of the nine weapons and was only able to purchase five of the twenty or so available hats, so multiple playthroughs are required to unlock everything that the game has to offer. I’d assume that most people will have so much fun during their first play through that they will at least play through the campaign a few more times to see what the next weapon to unlock will be or what goofy hat they can purchase next from the shop.

I thoroughly enjoyed my time with Donuts ‘N Justice and highly recommend it to anybody looking for a short but exciting shoot ‘em up. The game is brimming with fun shooting, a goofy premise, and a good variety of unlockables that are sure to keep players coming back for a few more rounds after completion.

Richard Allen is a freelance writer and contributing editor for various publications. When not writing for Gaming Trend you can find him covering theatre for Broadway World, movies and TV for Fandomize, or working on original stories. An avid retro gamer, he is overly obsessed with Dragon's Lair. Chat with him via @thricetheartist on Twitter and @richardallenwrites on Facebook and Instagram.
Related Articles: Donuts 'N Justice, Indies
Share
Tweet
Share
Submit