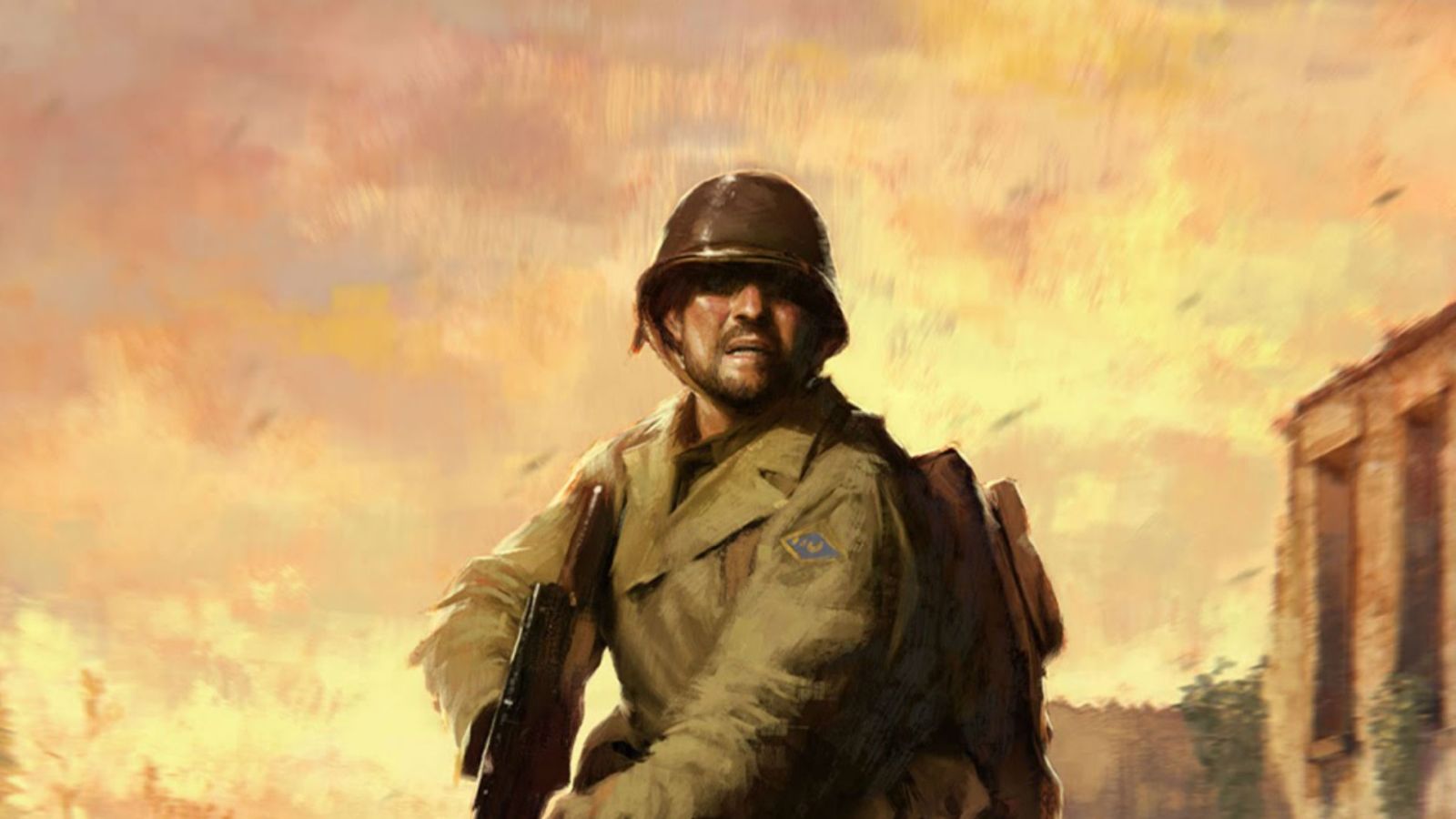 Band of Brothers, The Pacific, Saving Private Ryan — there are absolutely magnificent examples of the very human stories that bring the battles of World War II to life. The Medal of Honor series has also delivered on this personal connection multiple times, both in the World War eras, as well as in modern engagements. When EA announced that fan-favorite developer Respawn Entertainment would helm the series, bringing it to life as a virtual reality shooter for modern platforms. As an FPS and VR junkie, I was excited to see it all come together.

In the run-up to release, Respawn released the heady system requirements, and boy are they stiff. A 2080 equivalent and an i7-9700K will shut the door on a lot of folks, but I didn’t imagine I’d struggle with a 3070 or a 3080, even though my VR rig had an 8700K. I fired up the game and fpsVR reported frame times in the high 20s to low 30 milliseconds (it should be below 11ms for a smooth experience), so clearly it was time to kick things up a notch. Ripping apart my system I slotted in a brand new motherboard, power supply, 32GB of 3600Mhz RAM, an Intel i9 10850K, a Gen3 NVMe drive, and an RTX 3070 paired with my HTC Vive Cosmos Elite, I should be able to knock this one out of the park…right? The fact that I’m telling you about all this should give you the answer. 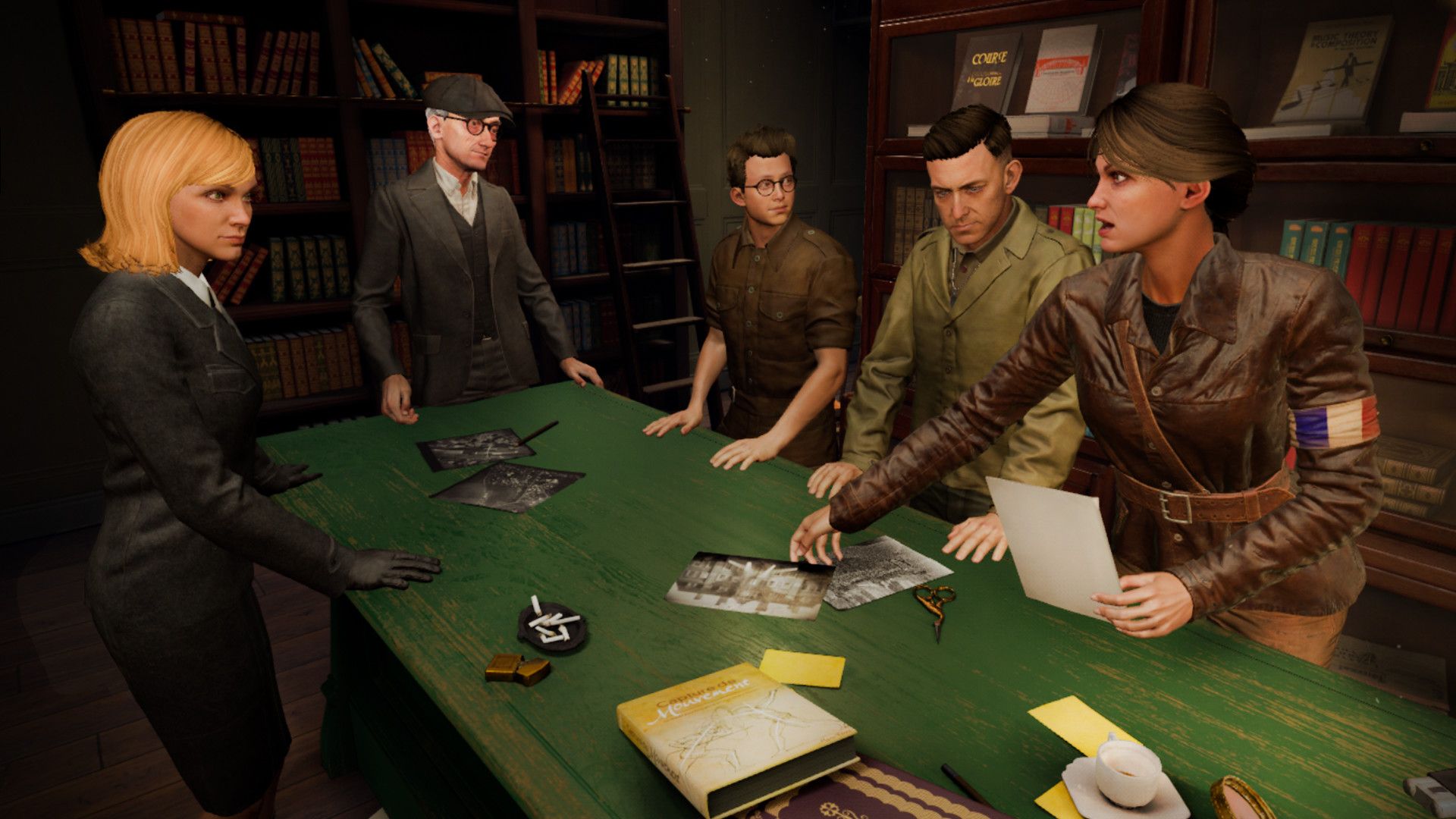 Firing up the game I was greeted with smooth and clean graphics with 90fps locked in — precisely what you need for a nausea-free experience. You can see this first 55 minutes of the game running below, but what you’ll also see is what ultimately awaits you — even with the most powerful gear you can buy. Medal of Honor: Above and Beyond runs beautifully as expected… until it doesn’t. While the game developers have introduced more granular adjustments to the visuals, it seems like your options are essentially clean and readable, or with a consistent framerate. Turning the supersampling down to as low as 20% makes it very difficult to see enemies clearly, but it’ll hold at 90fps for longer. I say longer as there seems to be some issue that happens over time, causing it to eventually tumble back down to 45fps. During some particularly mundane sequences (e.g. walking around a book store interior with zero enemies in sight) I saw the framerate hit as low as single digits. I have adjusted literally every VR and game setting in every conceivable way and no matter what I do I cannot seem to get Medal of Honor: Above and Beyond to run smoothly for any extended period of time. I grabbed my RTX 3080 and tested it again and found almost exactly the same result — this has to be a bug or poor optimization as I’m just not seeing the same behavior elsewhere. I just know that powering through these low-framerate sections is nauseating. 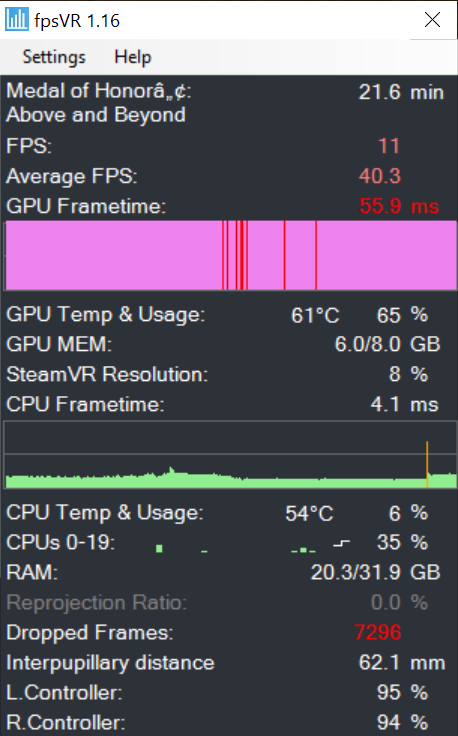 The way Medal of Honor is broken up is in small vignettes that last somewhere between five and ten minutes. These little mini-levels can be exposition or primarily combat, and on some occasions a bit of both. All in it’ll take you about 9 hours to push through all 54 of them, though if you are nausea prone you might need even smaller play chunks. I’m not sure why the Respawn team chose to split it up this way, but it seems like it could be better for folks who suffer when smooth movement is used. Unfortunately, there are no teleport options if you are particularly sensitive, so you’ll want to bear that in mind.

Medal of Honor: Above and Beyond’s storyline begins in medias res, with the preamble being essentially that you are a soldier in the Army, wounded during the Battle of Tunisia in 1943. Your wounds prevent you from talking, so your character will be mute throughout the proceeding levels. After saving two characters in the Tunisian campaign you are offered a position in the Office of Strategic Services — or OSS. This real-world group was responsible for many specialized weapons and tactics and served as a predecessor to over a dozen agencies that would ultimately turn the tide of the war. It’s a great setting if you are a history junkie like me. Where the game wobbles again is the amount of time standing around.

I play a lot of VR games. In fact, a quick check as I write this shows that I’m about to pass 1000 hours in the virtual world. That’s almost twenty-five 8-hour workdays living in a headset. I can safely say that standing around waiting for things to happen is easily 25% of that, and Medal of Honor: Above and Beyond is adding to that number quickly. There are expositional moments where you literally sit and do absolutely nothing but listening. Each conflict is typically split into three engagements, and one of these is likely going to be of the standing around variety.

The concept of ludonarrative dissonance (where a game’s narrative doesn’t exactly match the character or situation) is on full display here. Every character is a bit dead-eyed, but the main character you tag up with for your team can be, frankly, insane. Seeing Ollie mow down enemies with his cherub-like face in full smile, or watching the Vino bros joke after gunning down Nazis by the score makes me think they have, as the Brits would say, “lost the plot”. It does break the immersion a bit, and frankly, I’m surprised to see it. World War II is a fairly grim subject, but it feels like the pendulum swung too far in the wrong direction. 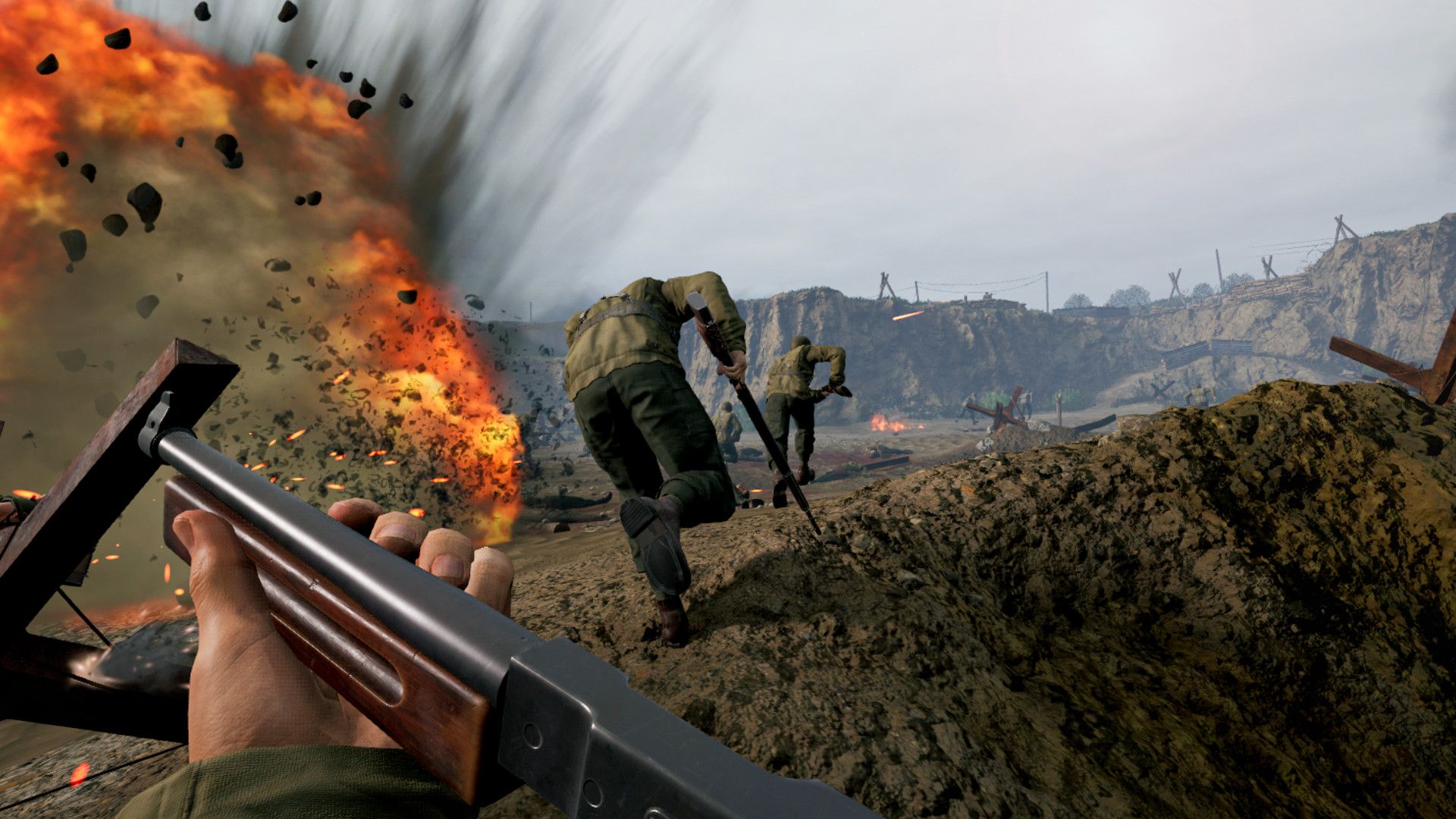 In the aforementioned Band of Brothers series, each story was told by the soldiers that lived it. Taking a page from that book, there is a documentary (thankfully unlocked from the start, thanks to a recent patch) that does the same thing. These create an amazing connection to the real-world situation and consequences of war, and they are absolutely worth a watch.

If I had one real highlight, and wow does it shine bright, it’s the weapons in this game. Respawn put a ton of work into ensuring that each of them feels meaningful, tactile to use, and downright satisfying. A double-barrel shotgun pops two shells, letting you snap it open with a quick jerk of the wrist. Sliding in two more shells and jerking it upwards snaps the chamber closed, and the gun is ready to use. Similarly, bolt action rifles require you slide the bolt back to chamber another round, then slide it forward and lock it before taking your next shot. Every weapon (minus the Springfield which doesn’t require charging once a new zip-clip is dropped in) has a way to pull in the next round. It makes the game’s combat feel satisfying. 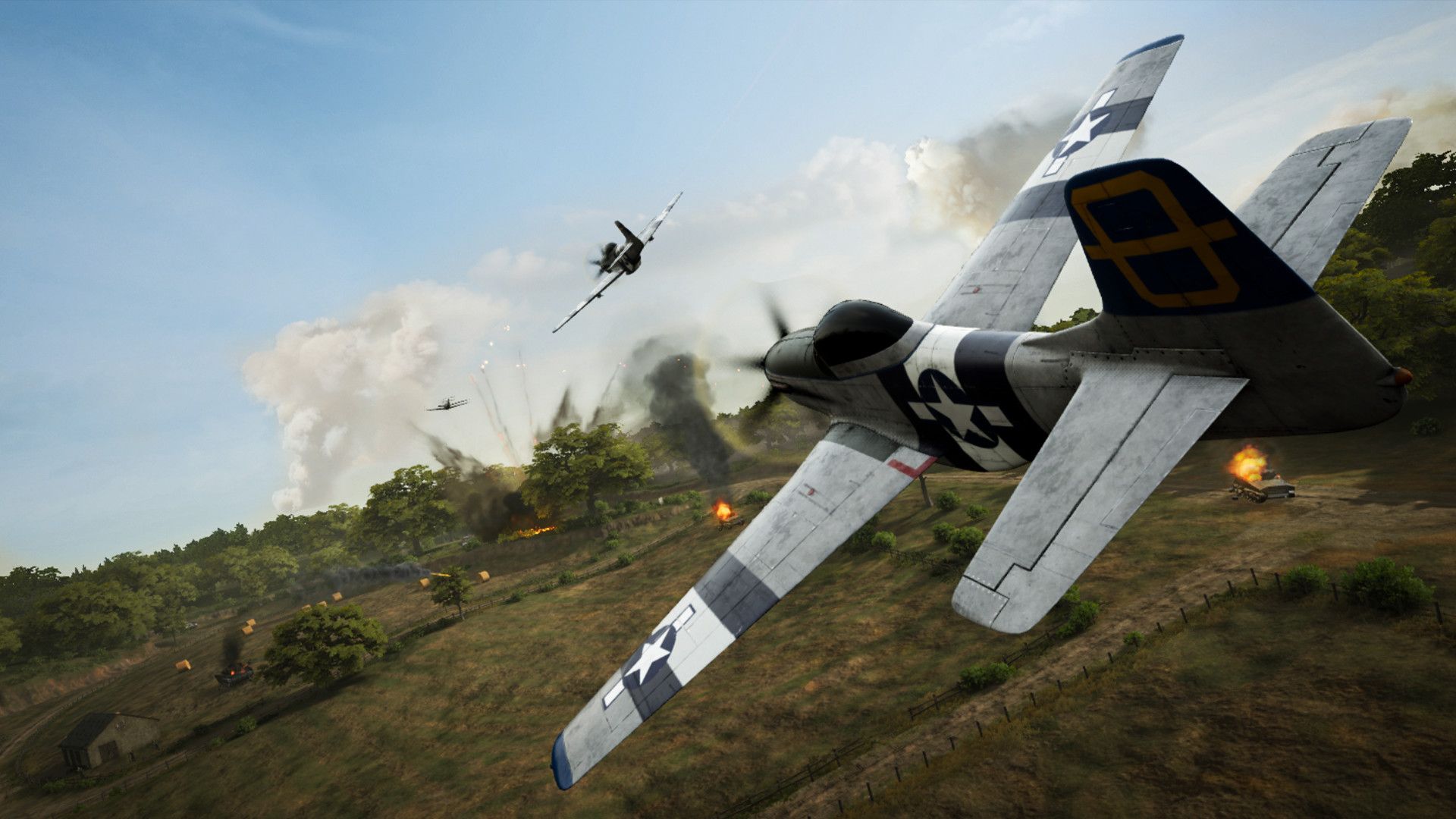 I was surprised to see that Medal of Honor: Above and Beyond supports multiplayer. Not only does it support it, multiplayer actually sports many of the features we see on larger titles like Battlefield V. Team Deathmatch, Domination, Free-For-All, King of the Hill, and Blast Radius (think bomb disposal from Counterstrike) are all present and accounted for, and they work extraordinarily well. This comes not from the modes, which are essentially what you’d find on a flat-screened game, but because of the awesome nature of VR gunplay. Rushing into a building and physically leaning out of the window to take shots at nearby enemies. All that said, the AI that can fill in your team if you don’t have enough human players won’t be winning any awards. They are happy to stand in place and accept high-speed lead poisoning. Still, I’m surprised to see bots just as I am to see multiplayer at all. It’s a real highlight.

The thing that surprised me most about multiplayer is that it runs perfectly. While the campaign is a framerate/frame pacing rollercoaster, multiplayer is as smooth as glass at the highest settings. Perhaps the team spent more time banging on this portion of the game than the campaign, but that just makes it worse. It’s possible for the entire game to be this smooth, clearly, but we’ll need another few patches — the two (which are both nearly 500MB each) we’ve gotten are inching us closer, but there’s still a pretty wide field to cross.

Medal of Honor: Above and Beyond

At the end of the day, I want to play more Medal of Honor: Above and Beyond, but the technical issues rear their head even on the most powerful hardware available. The campaign often falls on the wrong side of humor, but the gunplay is like nothing else. Multiplayer is an awesome added treat, though the bots are pretty dumb. It’s the very definition of a mixed bag.

Ron Burke is the Editor in Chief for Gaming Trend. Currently living in Fort Worth, Texas, Ron is an old-school gamer who enjoys CRPGs, action/adventure, platformers, music games, and has recently gotten into tabletop gaming. Ron is also a fourth degree black belt, with a Master's rank in Matsumura Seito Shōrin-ryū, Moo Duk Kwan Tang Soo Do, Universal Tang Soo Do Alliance, and International Tang Soo Do Federation. He also holds ranks in several other styles in his search to be a well-rounded fighter. Ron has been married to Gaming Trend Editor, Laura Burke, for 21 years. They have three dogs - Pazuzu (Irish Terrier), Atë, and Calliope (both Australian Kelpie/Pit Bull mixes).
Related Articles: Let's Play, Medal of Honor: Above and Beyond
Share
Tweet
Share
Submit