So you’ve never been on a date before. Whether it’s from lack of interest, social skills, or anxieties, your cuz is here to help. You’ve been invited to stay in his currently unoccupied apartment in Verona Beach for the summer before his lease runs out. He’s got some dates lined up for you to overcome your fears, like meeting up with someone in a cafe or delving into dangerous dungeons. You see, some people have the ability to turn into weapons, and when you’re not out smooching them you’ll be slashing monsters with them. This is Boyfriend Dungeon, a rogue-like where your weapons are also your love interests.

After creating your character (gender is chosen through he, she, or they pronouns which is nice) you’re quickly thrown into the Mall Dunj where you meet your first potential date: Issac the Estoc. Every weapon has light (Y) and heavy (X) attacks you can mix in a three hit combo to battle the monsters the dungeon forms from your subconscious fears. You also can dodge with B, use a Zine for a special ability like a fireball or grenade with R, and heal with L by drinking your beverage of choice. Combat is pretty simple and can feel very stiff, but its simple nature along with the variety of weapons makes it fun throughout. 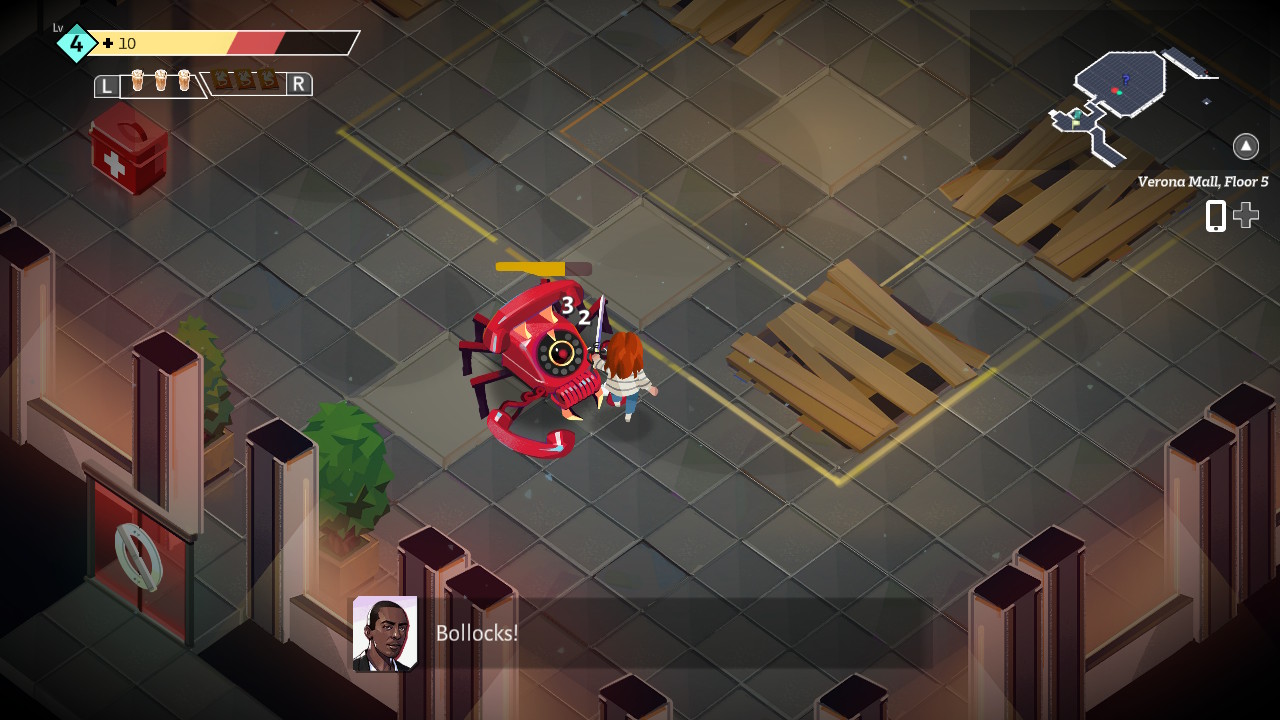 As you make your way through the randomly generated dungeons, you’ll discover new friends/weapons who have been kidnapped and trapped on the various floors, their weapons mysteriously chipped. Using a weapon will level up your relationship with them, with each level resulting in a date and subsequently a new skill or buff when using that partner like the ability to attack while rolling or having finishers inflict bleed on enemies. The dates themselves are cute and the characters are fun to get to know. You can date as many or as few weapons as you like, and you can even choose to simply be friends with them if you want using certain dialogue options. It’s a neat gameplay loop that brings out the best in both the rogue-like and visual novel genres.

The game does have its shortcomings though, with short being the operative word: there are only two dungeons. Just when it feels like the game is settling into a groove, the main plot is suddenly introduced, the summer is almost over, and the final boss fight opens up. While the game is less than 10 hours long, it really could have used at least one more dungeon and a few more ranks for each character, say 10 instead of 6. Seeing as I was nowhere near rank 6 with anyone by the time the final boss was available, which is required to enter, it felt like the game stumbled towards an ending rather than earning one. There is more content coming, like updated content warnings and two new romanceable characters, so hopefully more dungeons are part of that plan. 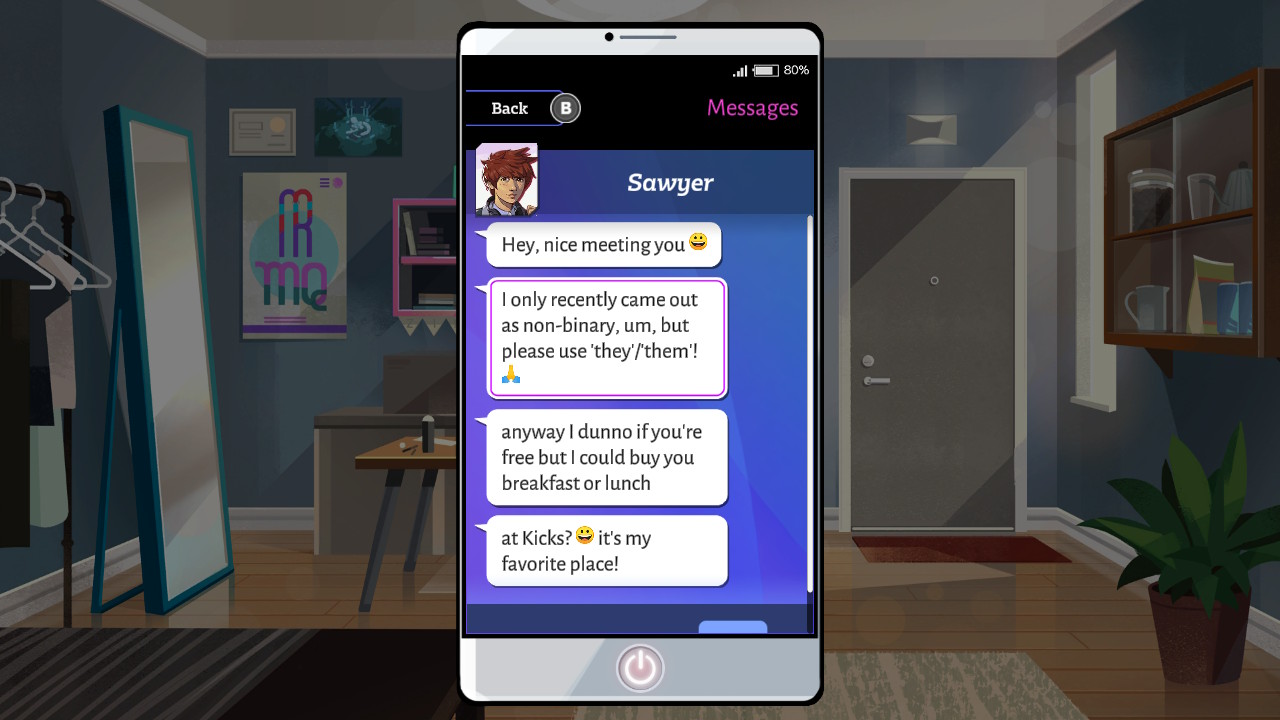 Despite being too short to really flesh out all of its ideas, Boyfriend Dungeon is still very much worth playing, especially if you’re starved for queer representation like I am. You can date anyone regardless of gender and there are even two nonbinary characters you can date who aren’t robots, aliens, or other non-humans! (I joke, but that is surprisingly rare.) While I am a little tired of mostly seeing LGBTQ+ representation in visual novels, the dungeon crawling aspect makes it stand out.

Your character can also completely change everything about them using the mirror in the apartment along with changing clothes. You can purchase clothes with money you make in the dungeon, or make certain items with the crafting bench provided you have a recipe and the required materials. Along with apparel, which sometimes comes with buffs, you can make new Zines or gifts. The customization is nice, but the buffs on particular items made me feel pressured to wear those instead of what I actually wanted. Once I had leveled up enough though, the game became so easy I didn’t need the buffs anymore, so I suppose the system has its pros and cons. Eventually I settled on the headphones for style and the fact that they change up certain music pieces in the game. 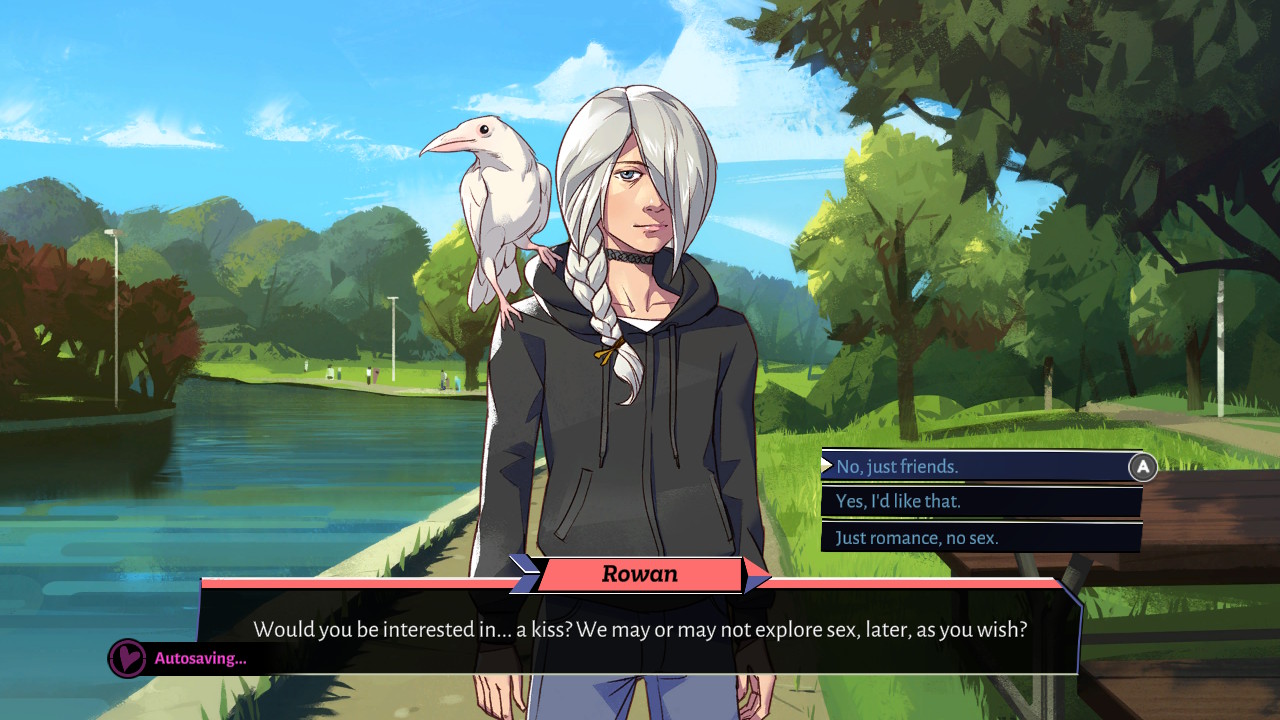 Speaking of, the music is absolutely spectacular, with the main theme being a highlight. I’ve already added the soundtrack to my regular listening rotation, so be sure to check it out if nothing else. The visuals are pleasant as well, the isometric, chibi style of the world map and Dunj look nice and communicate information well. The visual novel portions look especially great, with detailed portraits and excellent animated intros for each character. Finally, the voice acting, while sparse, is uniformly great. It’s clear a lot of love went into getting everything right in terms of audio and visuals, and the writing feels very warm and kind.

While it’s a bit too short to realize its full potential, Boyfriend Dungeon is still a well written and fun visual novel/dungeon crawler. The characters are lovely, and combat is simple but functional. It’s certainly worth playing, but could use more content.

David is the kind of person to wear his heart on his sleeve. He can find positives in anything, like this is a person who loved Star Fox Zero to death. You’ll see him playing all kinds of games: AAAs, Indies, game jam games, games of all genres, and writing about them! Here. On this website. When not writing or playing games, you can find David making music, games, or enjoying a good book. David’s favorite games include NieR: Automata, Mother 3, and Gravity Rush.
Related Articles: Boyfriend Dungeon, Indies
Share
Tweet
Share
Submit