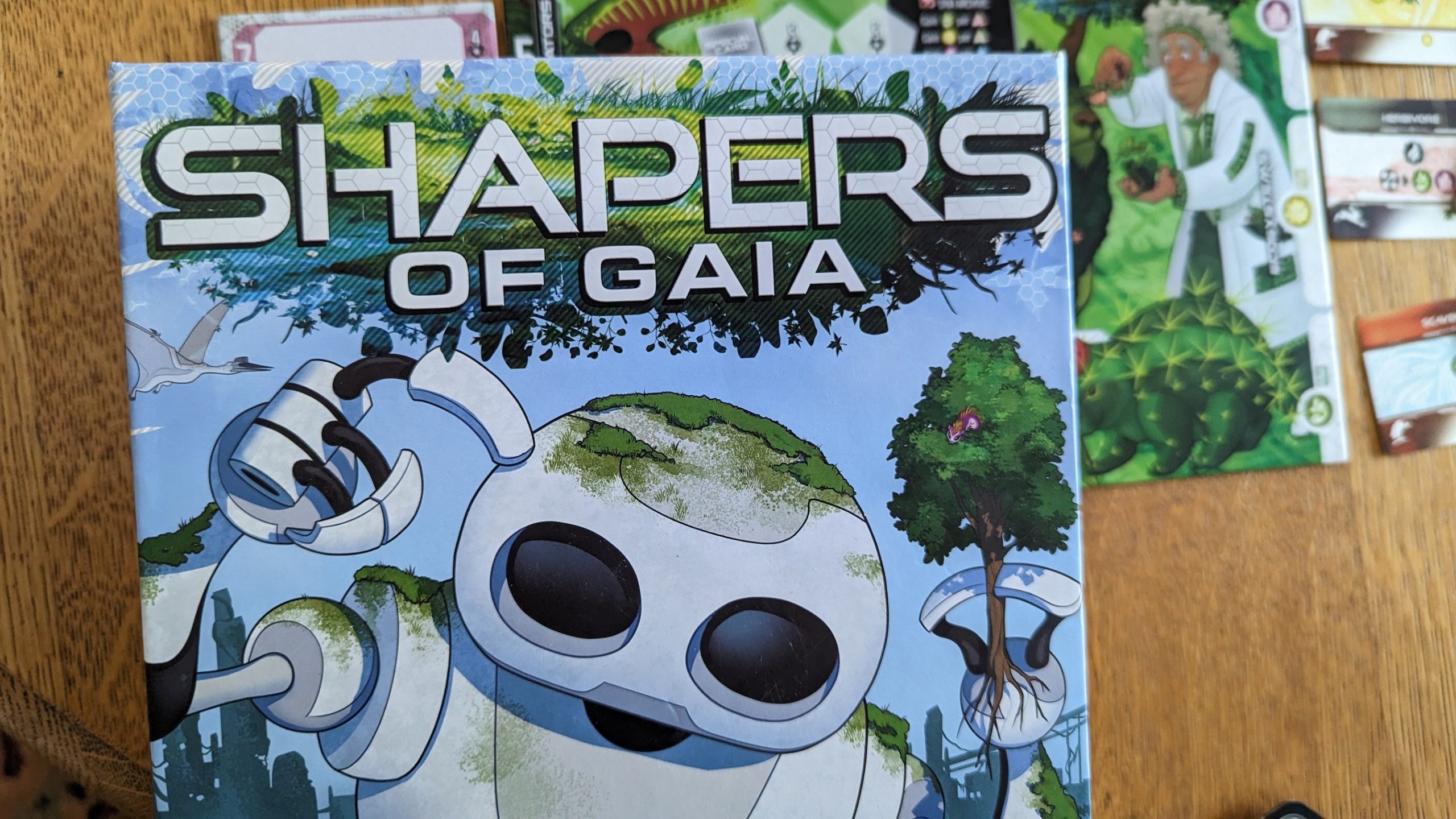 I love games with a good arc, so a well-done engine builder that takes you from barely having enough to do anything in the beginning to swimming in a bounty of resources by the end is going to usually be up my alley. Add in quality production and interesting tactical decisions, and you’re looking at a game I’ll drool over. Shapers is that game. 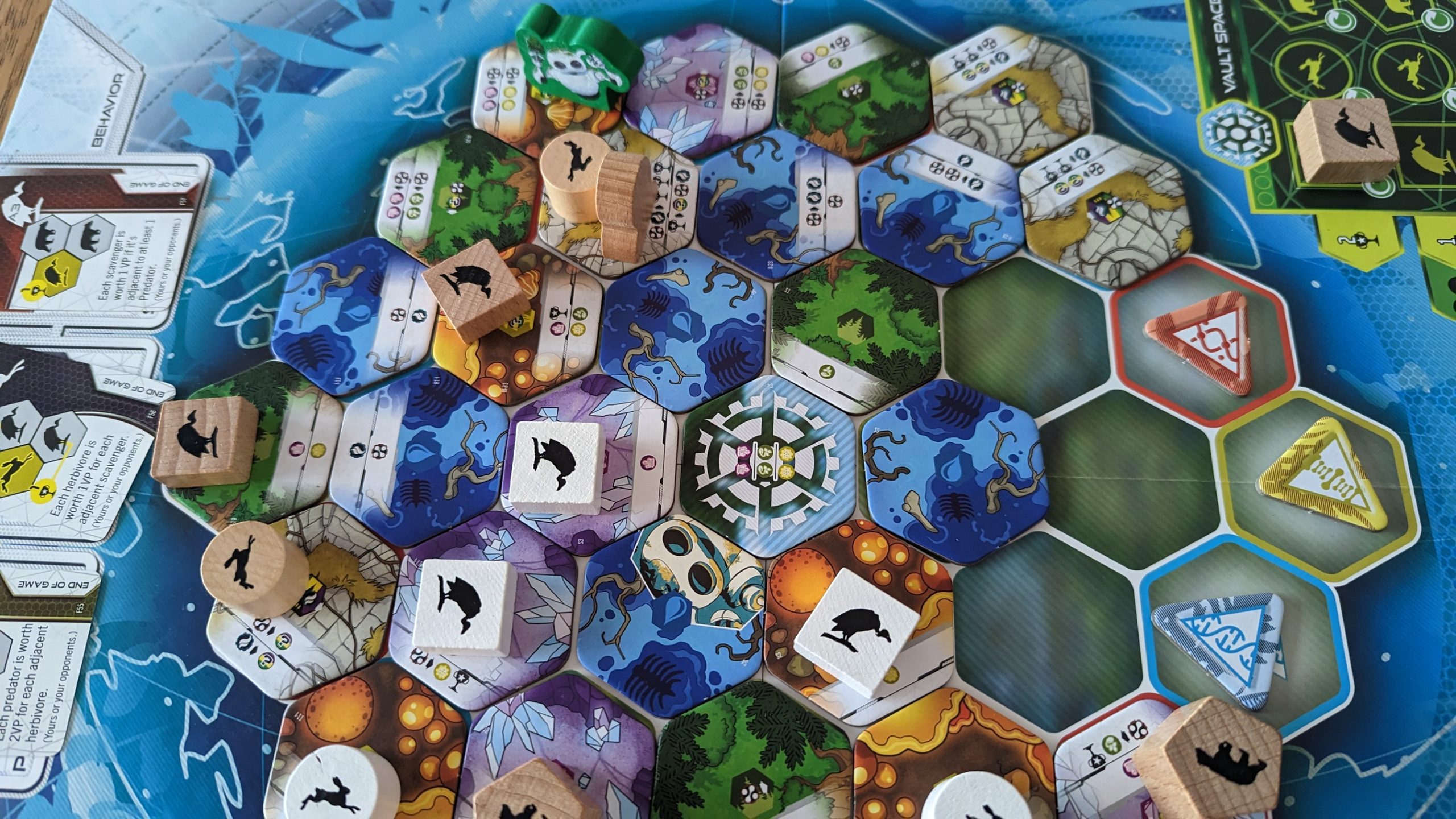 Right out the gates, Shapers impresses with its straightforward rules that don’t constrain the game’s strategic depth. On a player’s turn, they have the choice of two actions: either playing biome tiles from their hand to the main board or introducing an animal onto an empty biome. Restoring biomes uses an iterative process- each tile must be placed adjacent to both the caretaker’s current tile and one other tile, followed by the active player choosing one of the tiles’ two resource management options, other players having the opportunity to carry out the other, and then moving the caretaker onto the newly placed tile. Introducing animals is simultaneously how players convert their resources into points, build their engines, and activate them. After moving up their shaper up to three spaces to an empty tile, a player spends resources indicated by said tile and their player board to move one of the animal tokens from their player board onto that space on the map. They’ll also grab one of the double-sided cards of that animal type from the market, place it into their matching biome row on the side of their choice, and activate all the cards in that row. Removing animal tokens from your player board also unlocks or upgrades shaper powers, which make your future actions more efficient or allow you to break rules in neat asymmetric ways.

In case you couldn’t tell by now, I’m going to be spending the rest of the review singing the praises of Shapers of Gaia, so let’s go on ahead and get my criticism out of the way. First off, the art, while by no means the worst I’ve seen, does feel lifted from an educational children’s cartoon. We’re already into nitpicking territory, but players’ resource tracks could have been an extra inch or two wider, as there simply isn’t enough room when multiple tokens are at the same count. Finally, and this isn’t so much a fault as it is a hindrance, the 2-3 player count makes it a bit of a hard sell, especially when combined with the art. There are also multiple instances of equal signs that only work one way, which makes my inner math major kinda sad and confused. With that done, let’s move on to the multitude of things that Shapers does well. 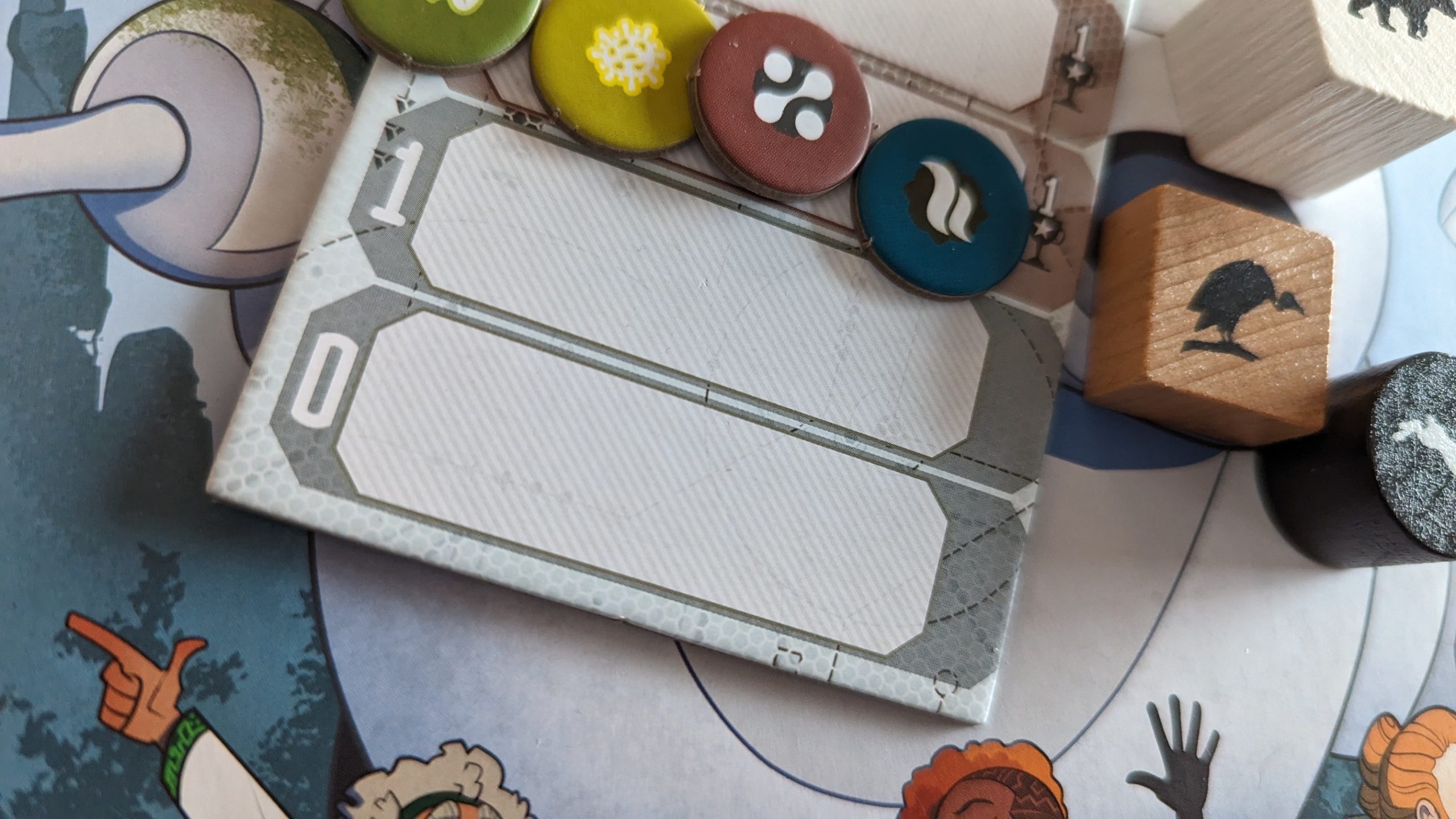 You’d think if introducing animals not only unlocks powers but also builds and runs your engine, it would stand to reason that it would be your primary pursuit, only playing tiles when you’re totally out of resources. On the contrary, some excellently designed sub-mechanics maintain a balance between the two actions throughout the course of the game. The most obvious early game incentive is to have the resources to pay for an animal that unlocks a stronger ability than the one-cost scavenger, but most shapers have powers that benefit from the map being laid out in a specific way, so dictating the map layout in the early and mid game is beneficial to them. As the game goes on and players’ engines become stronger, tiles become more powerful, from both the conversions offered and the opportunity to scoop up the DNA tokens seeded on the edge of the map during setup. At the end of the game, players will place their DNA tokens on animals that can take the appropriate color, with like color tokens in the same biome scoring exponentially, but leftovers cover over the points depicted on player boards for introducing animals.
These tokens are another brilliant design decision in a game chock-full of them, as they provide more decision space in so many ways. Accounting for the massive amount of points they potentially represent, otherwise suboptimal plays suddenly become thoroughly viable. At all stages of the game, players are encouraged to undermine themselves by placing animals in places that they won’t score as well, adding cards that don’t work with their engine, and even playing tiles when introducing animals and running engines actually provides more resources than It would cost, all in the name of those sweet exponents. 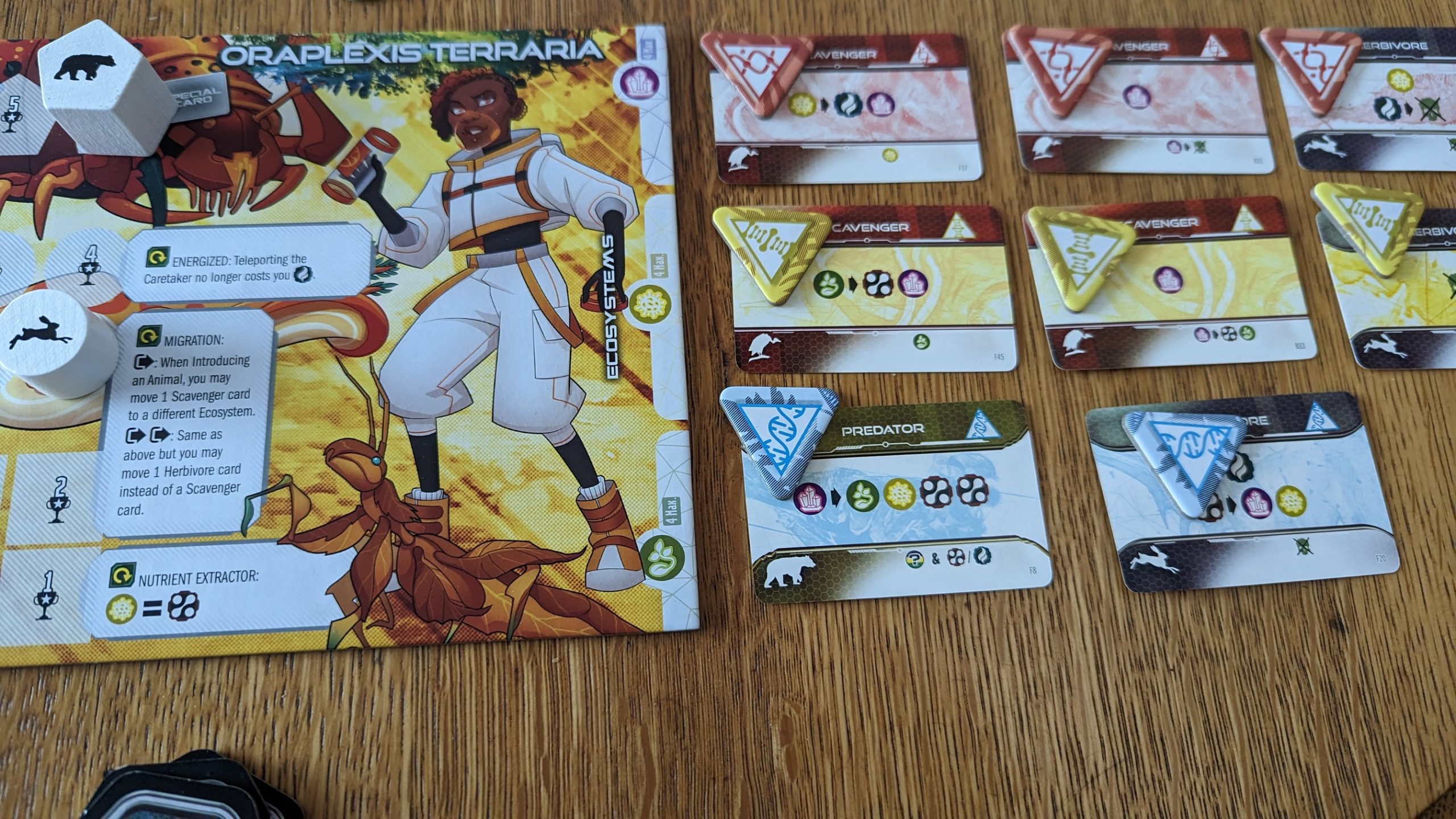 It’s worth mentioning how well Shapers handles implementing its mechanics. Shapers has my favorite form of asymmetry, where everyone is still playing the same fundamental game, and player powers are more incentives and opportunities to be maximized than direct buffs to a strategy or two that pigeonhole players into a certain playstyle. While other engine builders can easily become excessive to the point of overwhelming by the endgame, Shapers wisely divides your engine into 3 separate biomes, each with a limit of 4 cards, so running your engines feels good without ever being too much. Also, similar games will often flood players with resources, making the game more of a conversion efficiency puzzle, but Shapers keeps you starving until the end, making properly managing your resources in tandem with your engines the focus of your attention. I also need to recognize the ingenious use of resource tracks, especially in an engine builder where players will routinely be exchanging resources at a rate that would make grabbing and turning in tokens a chore. Finally, while I have mentioned that the art is meh at best, the choice to use big chunky pieces of wood is an excellent production choice that gives every action satisfying heft.
People that want their games to laser-focus on one mechanic and reward them for doing the same may very well be turned off by Shapers, but if you’re like me and like games that pull you in three different directions at once, you’ll find yourself right at home.

Shapers of Gaia keeps its players poor enough throughout its playtime that affording to keep your engines fed while accomplishing anything that actually scores more than the basic points given for taking animals off your board requires the balance and finesse of a high-wire act, making every accomplishment feel rewarding, but its masterful mechanical implementation means you always have the means of picking yourself up if you falter.

Nick grew up reading fantasy novels and board game rules for fun, so he accepted he was a dork at an early age. When he's not busy researching the intricacies of a hobby he'll never pick up, Nick can be caught attempting to either cook an edible meal or befriend local crows.
Related Articles: Shapers of Gaia, Tabletop
Share
Tweet
Share
Submit