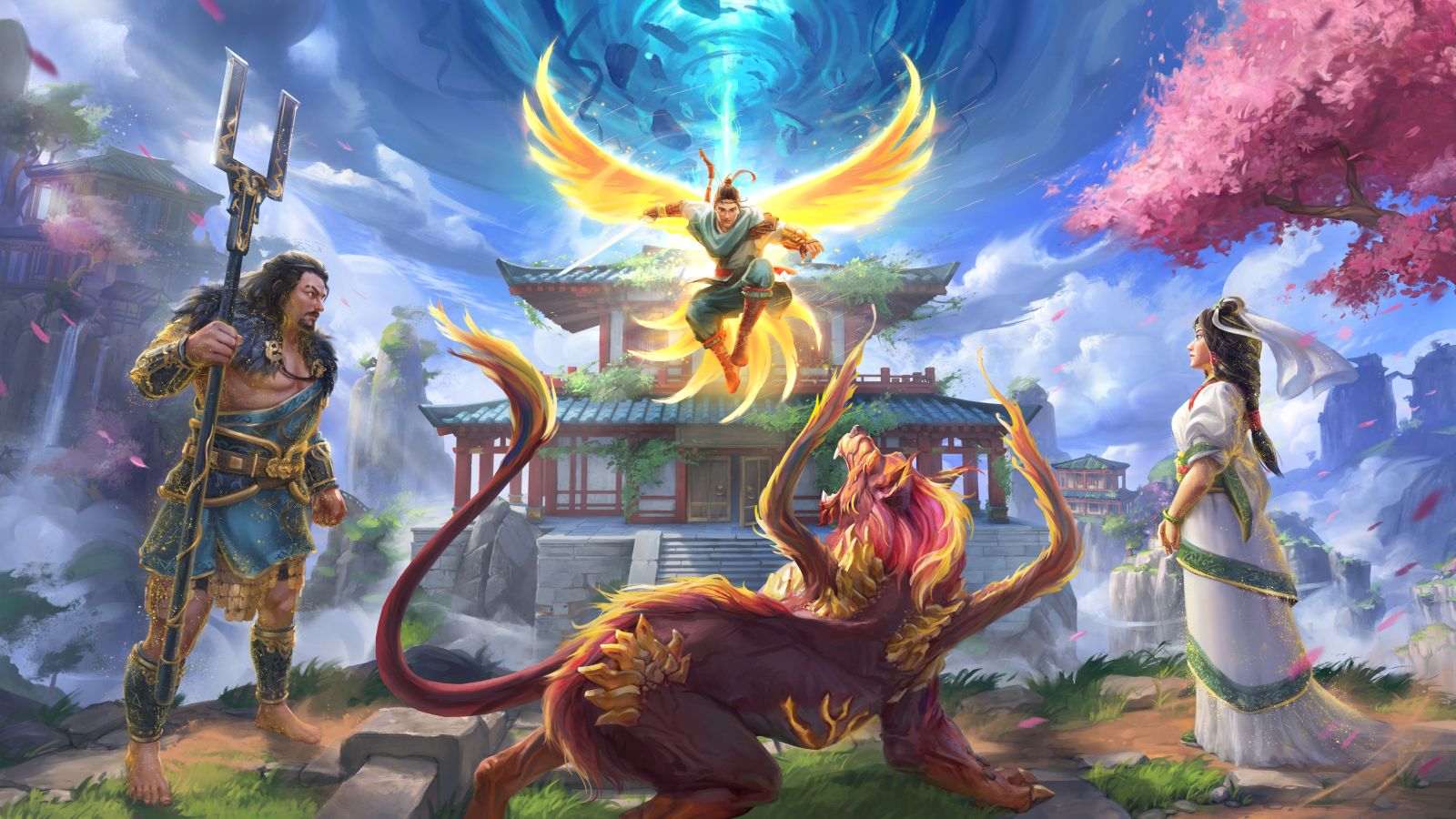 And now for something completely different! You’ve likely read our review for the magnificent surprise that is Immortals: Fenyx Rising, or the first DLC (our review) which expanded on the story of Fenyx and the events that unfolded after her conflict with the god Typhon. Well, Ubisoft threw us a curveball courtesy of their Ubisoft Chengdu studio in the second of three planned DLC, with this one taking us on a standalone adventure to the Far East. Welcome to Immortals: Fenyx Rising – Myths of the Eastern Realm. 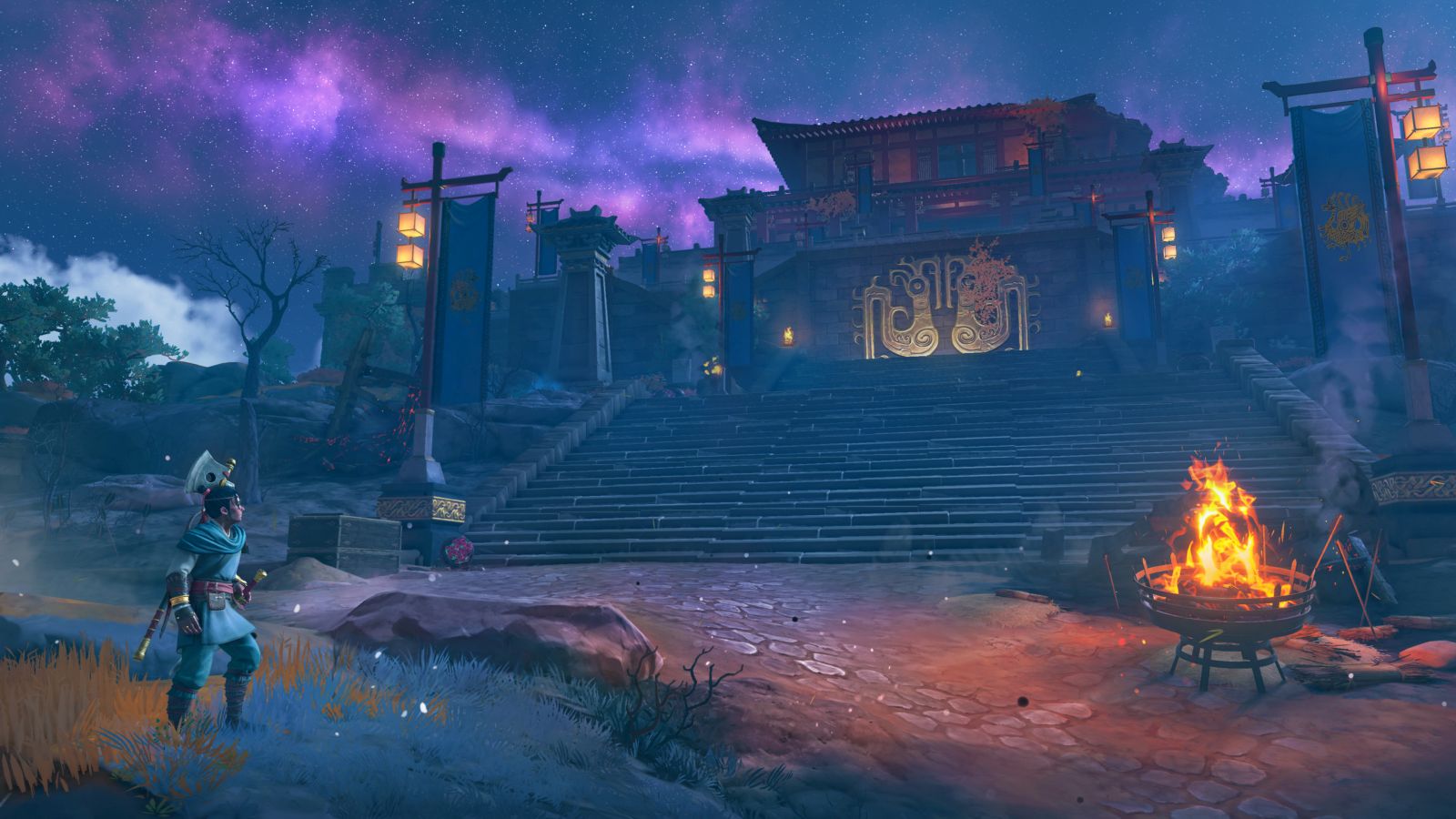 Myths of the Eastern Realm (hereafter MothER, because I say so) puts us in the soft boots of a brand new protagonist named Ku. Awakening to similar situations to that of Fenyx (not sure where he is, friends are turned to stone), Ku sets off to figure it all out. As chaos emerges from the land once again, a “Dark Presence” is released from Bu Zhou Mountain. The balance must be restored to seal a massive “scar” in the land. Ku is tasked with restoring that balance by the Goddess Nüwa (localized as Nuwa in the game — I’m gonna write it correctly, thanks), starting his grand adventure.

Much like Fenyx Rising and the first DLC, the game focuses on a little bit of history with a humorous hint. For example, in Chinese mythology, it was Goddess Nüwa who cut the legs off of the World Turtle Ao to support the sky after the Chinese water God Gonggong damaged Buzhou Mountain (referred to as Bu Zhou Mountain in the game) by smacking his head into it, knocking the world off-axis. Rather than explaining all that, she quickly makes a joke and ejects from the conversation when a discussion about turtles with Ku takes a bit of a turn. It’s very tongue in cheek, and even without a deep knowledge of Chinese mythology comes across, albeit not quite as successfully as its predecessor. To catch up Western audiences there are World Logs scattered around the two halves of the yin and yang shaped world, offering up all of the lore and backstory you might need to fully understand and enjoy this world. 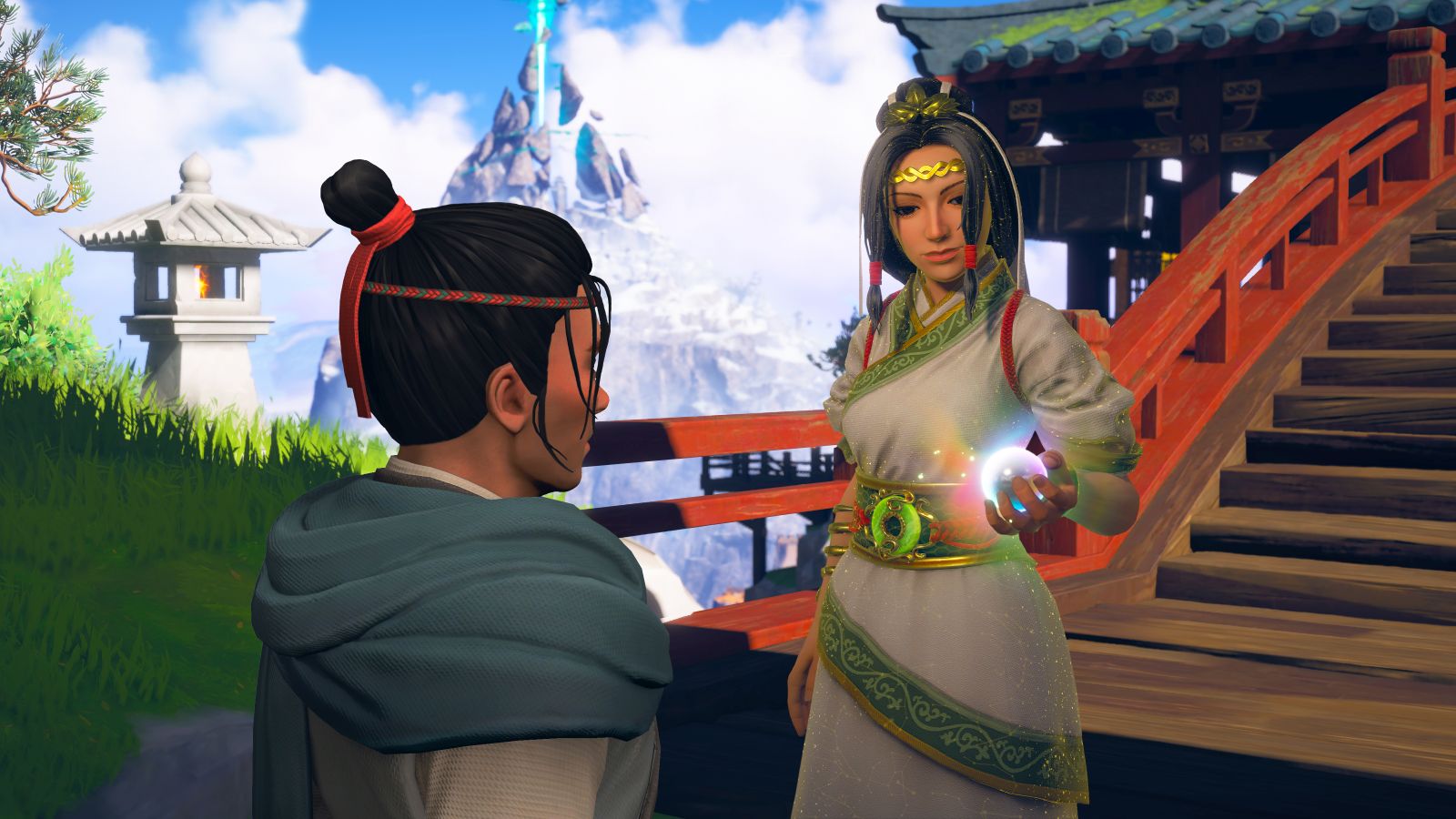 The story beats of Myths of the Eastern Realm carry a lot of the same structure as Fenyx Rising, but don’t let that deter you. They are deeply rooted in Chinese culture and mythology, and bring their own twist to things. Even Ku has 37 powers (gliding, leaping, etc.) that are unlocked automatically and maxed out, just like A New God, and his 15 godly powers (axe power attack, upward spears, etc.) follow closely behind in the first hour and a half of the game. What remains are six powers connected to your melee attacks called “God Seals”. These three ability upgrades grant additional damage, stun, and a chance to drop stamina orbs, unlocked with Jade Coins. The Jade Coins are like Charon’s coins, and are found the same way — completing challenges.

In Fenyx Rising you’d frequently find block sliding puzzles, asking the player to slide tiles to make a picture. Here those are replaced with tile flipping puzzles where flipping one tile also flips all of the tiles adjacent. Getting them flipped in the right order to show the image using your bow is more my speed, so I enjoyed this change quite a bit. Wind is a big part of Chinese mythology, so naturally it’s a big part of puzzles here. Redirecting the wind to raise pillars and move blocks is featured heavily. There’s also a new block that can be shrunk by striking it with a weapon or arrow. Where Fenyx may have been the team’s first real foray into this style of logic puzzle, the Chengdu team seems to have hit their stride with them — they are a real highlight. 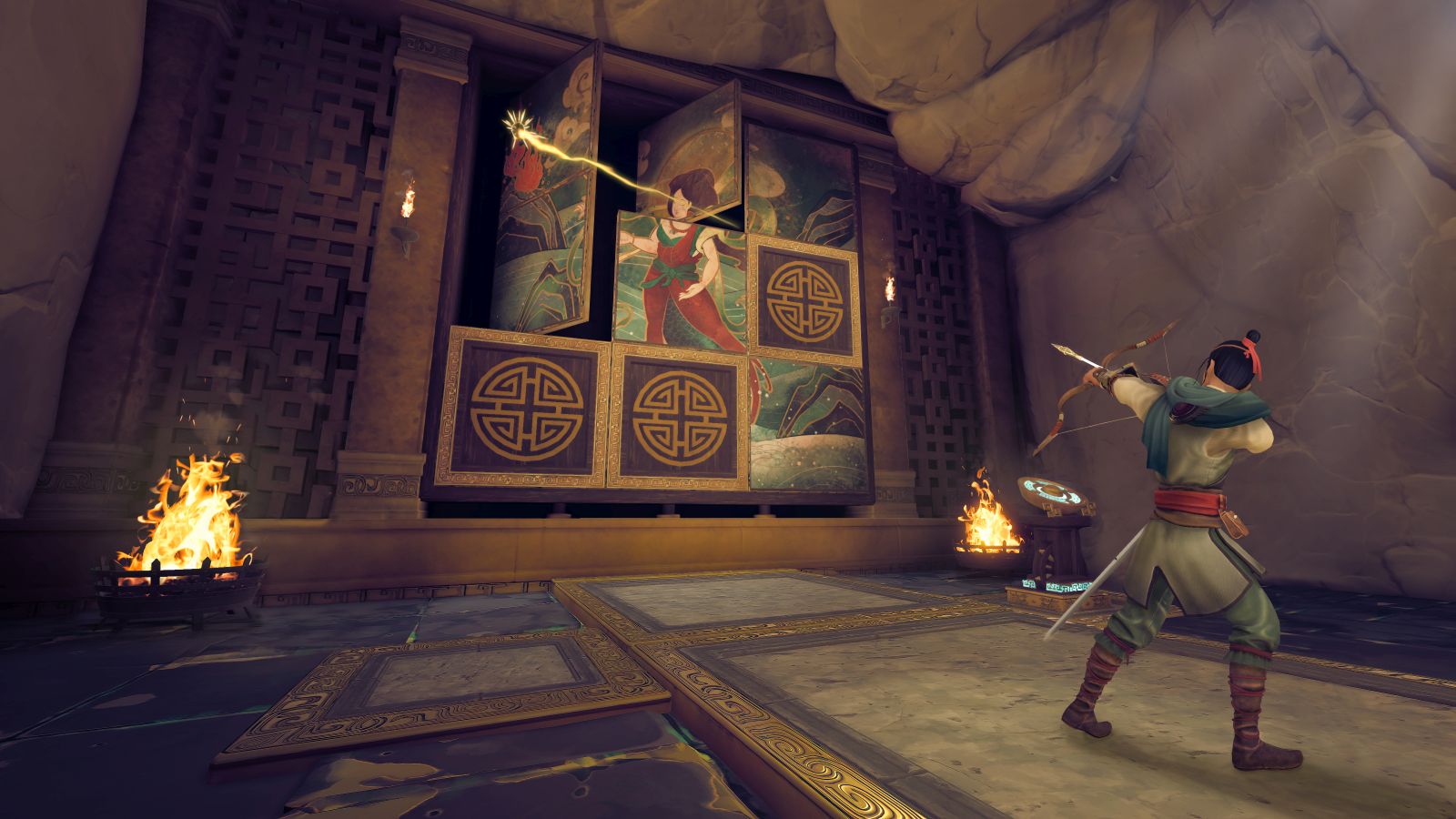 In another similarity to Fenyx Rising, Ku will frequently visit the Peace Forge to upgrade his health, stamina, brew potions, and the like, replacing the Hall of the Gods. He’ll collect the same four gems for upgrades to his sword, axe, bow, armor, and headgear, and health pomegranates are replaced by peaches, Lingzhi mushrooms replace the generic blue mushrooms, etc. If it’s not broke, don’t fix it, right?

I am surprised the Chengu team didn’t replace the axe from Fenyx with a traditional guandao, but I’ll take Dragonhead axes in a pinch. That said, it’s nice to see Ku employing a jian sword, thrusting it properly instead of defaulting to Fenyx’s more hacky sword swings.

Other similarities exist in this DLC including Jing Wei, a phoenix that replaces Phospor from our Grecian adventures and operates much the same, but there are a few new mechanics to break things up. Jing Wei can make a stone clone of Ku which can be used to activate pressure plates, allowing you to be in two places at once for puzzle solving. 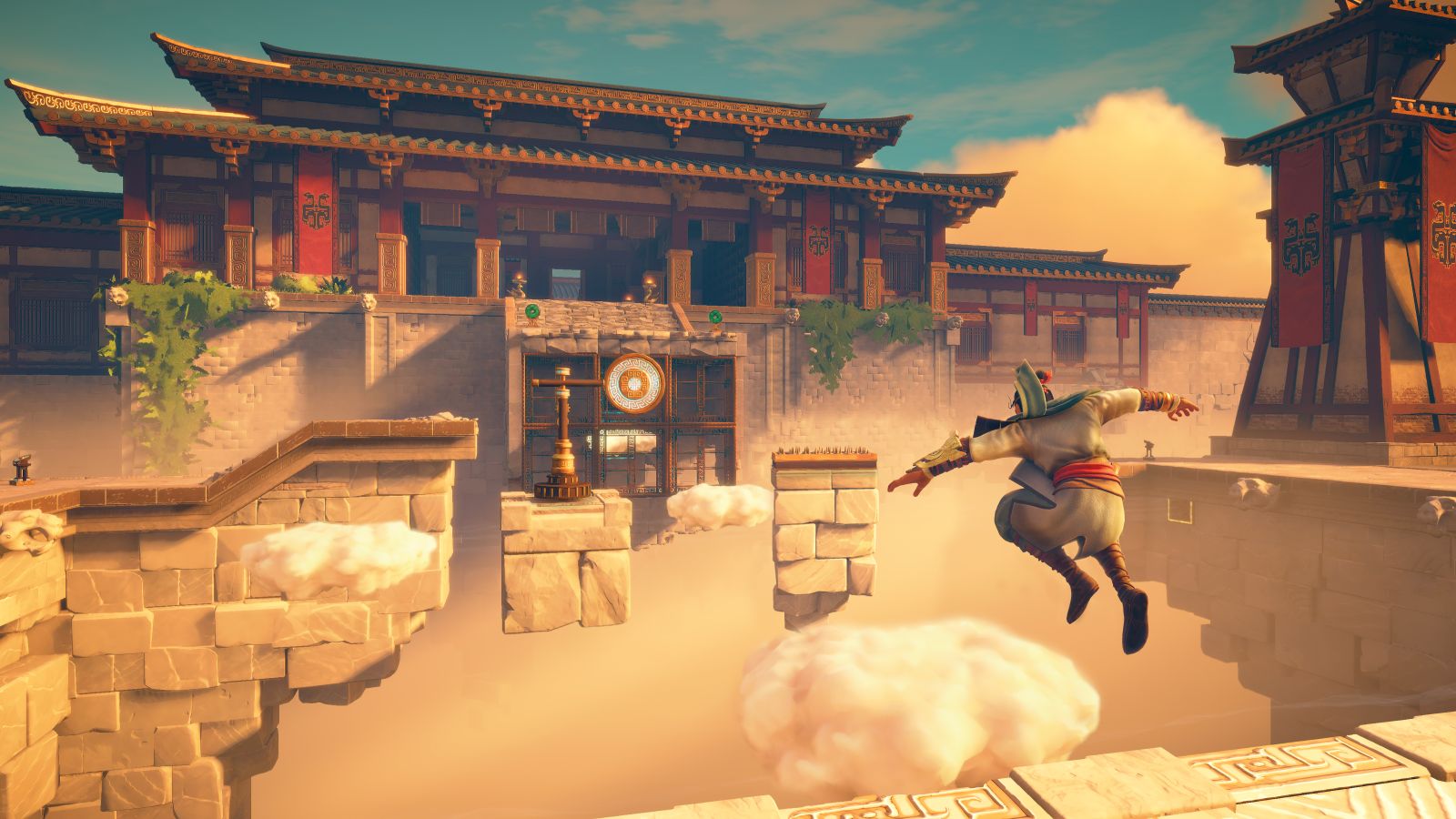 I did run into a few moments where my mid-dungeon save points didn’t quite register, making failure frustrating as I had to repeat the entire sequence. I also ran into two instances where the framerate plummeted from over 100 to less than 20 for a few moments and then rocketed back up. Given that it only happened twice, I’m certain this rough edge will be buffed out with drivers or the launch day patch.

Depending on how much of a completionist you are, this expansion can easily push your play time by another dozen hours or two (I’m at 144 hours so far with this game and the first expansion, so maybe I’m not the best barometer?). You will get far more than your money’s worth out of this season pass.

Immortals Fenyx Rising: Myths of the Eastern Realm gives us a fresh protagonist, a completely new setting, familiar mechanics and a few new tricks. With fantastic logic puzzles and the same tight combat as the base game, Myths of the Eastern Realm represents a great new way to experience everything we loved from the original. Let’s hope Ubisoft continues to take risks like this as they seem to pay off in a big way.

Ron Burke is the Editor in Chief for Gaming Trend. Currently living in Fort Worth, Texas, Ron is an old-school gamer who enjoys CRPGs, action/adventure, platformers, music games, and has recently gotten into tabletop gaming. Ron is also a fourth degree black belt, with a Master's rank in Matsumura Seito Shōrin-ryū, Moo Duk Kwan Tang Soo Do, Universal Tang Soo Do Alliance, and International Tang Soo Do Federation. He also holds ranks in several other styles in his search to be a well-rounded fighter. Ron has been married to Gaming Trend Editor, Laura Burke, for 21 years. They have three dogs - Pazuzu (Irish Terrier), Atë, and Calliope (both Australian Kelpie/Pit Bull mixes).
Related Articles: Immortals: Fenyx Rising - Myths of the Eastern Realm
Share
Tweet
Share
Submit