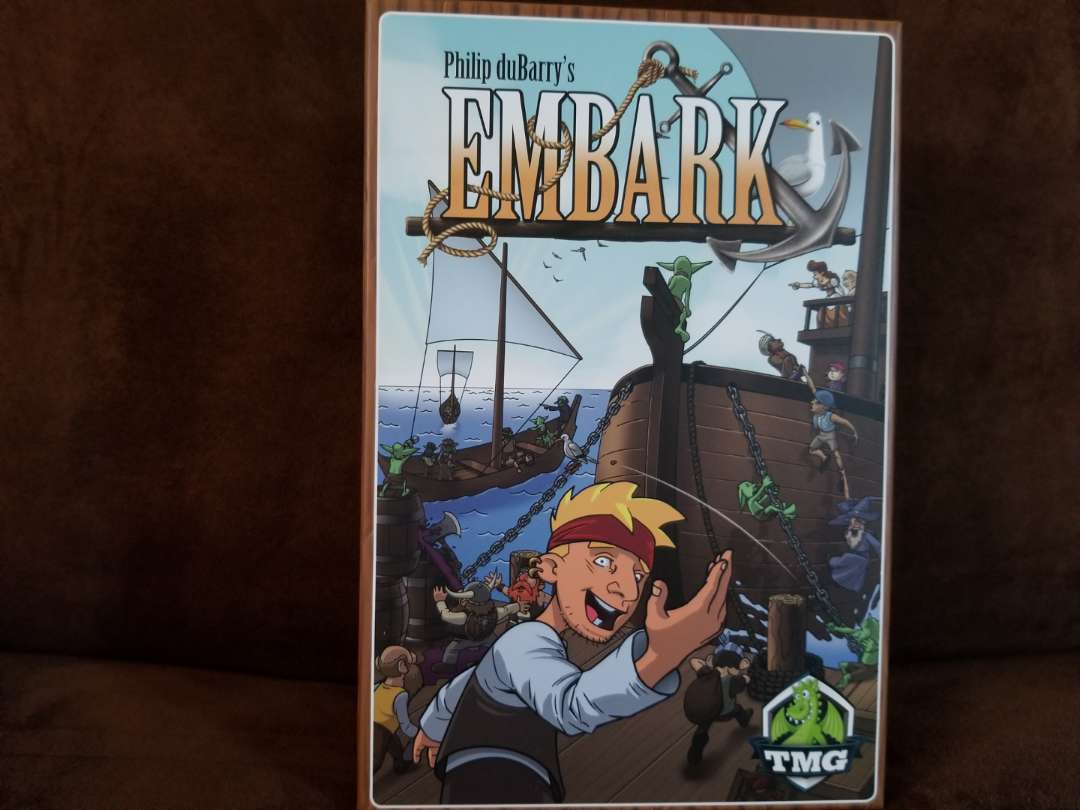 Mankind has desired to explore the unknown for arguably as long as we have been mankind. An early example of this was ships sailing to new landmasses in the hopes of discovering new resources and land to be used. Voyages like these have had lasting impacts, including the formation of the United States as we know it. What was it like to sail to somewhere new and make do with what you found? Embark is a tabletop game that lets you simulate this experience, albeit in a simplified manner. There aren’t many intricate details, but the journey is still plenty of fun.

Embark is a tabletop game where you send voyagers to a series of islands to perform several tasks. The goal of these tasks is to earn points; some tasks translate directly to points while others obtain resources that turn into points later. As with many games, whoever has the most points at the end of the game wins.

You set up the game by grabbing several island cards equal to the number of players. These cards are placed side by side, and you must place all lock, key, and ore tokens in their designated spots on the islands. These tokens correlate to special effects that each island can trigger. If the keys are collected by exploring, the locks are opened and the special effects are activated. These can add additional points, resources, or any number of things. Each island has two docks, and you randomly grab boat cards from the deck until you have enough for each dock. Lastly, there are ability cards and each player gets two of them, but more on that later. 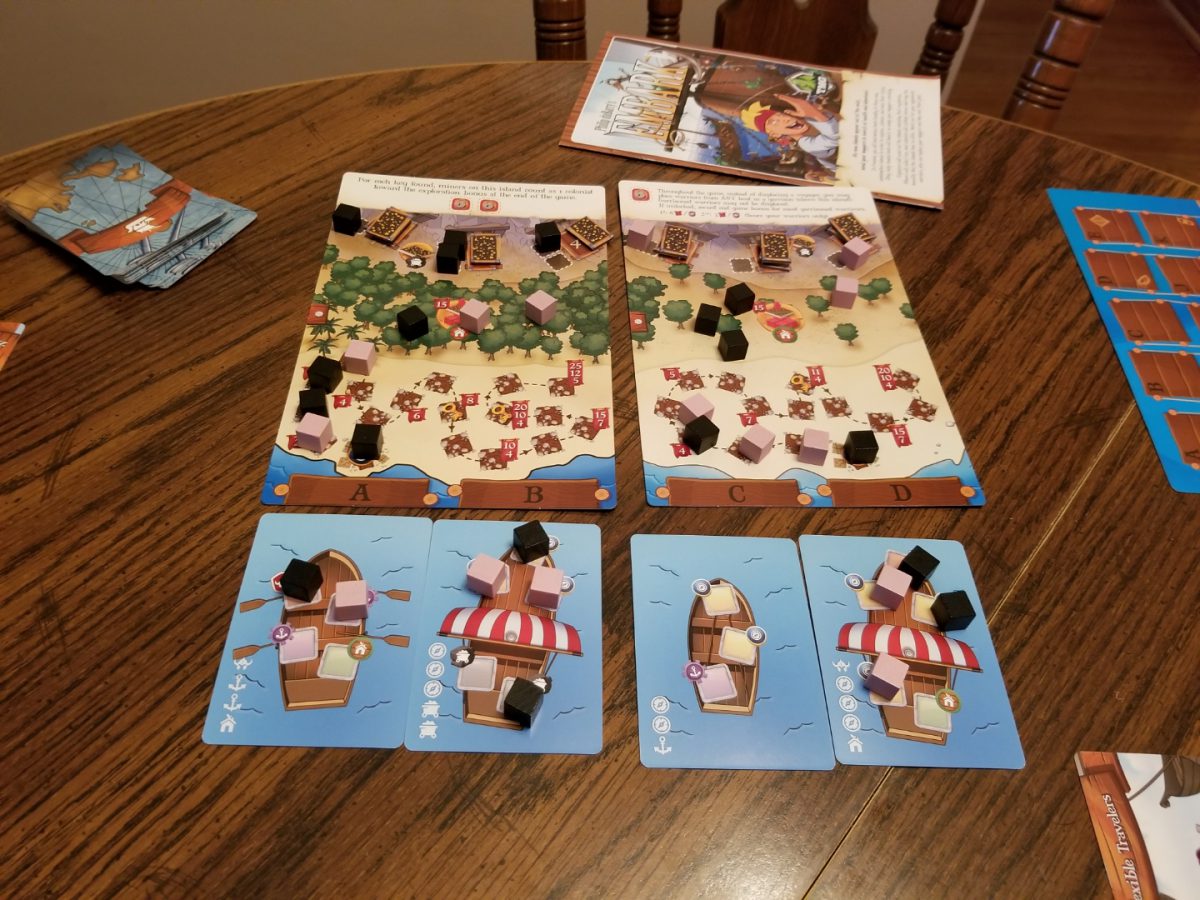 Each player has a cardboard screen that they set up in order to hide their moves from other players. Behind these screens you’ll have cards that show each of the possible docks that could be in your game, along with thirty cubes that represent your voyagers. Each round starts with every player grabbing five cubes and deciding what docks they want to send their voyagers to. After everyone has finished secretly planning out their moves, the screens are pushed aside. From here, you take turns moving cubes from your base to boats that correspond to the dock space you placed them on. Whoever you chose to go first starts it off and this continues clockwise. The other rule is that the boats must be loaded up in alphabetical order; this means that you start with dock A, then B, then C, and so on. If the starting player didn’t place any voyagers on an earlier dock, the clockwise pattern takes effect. You choose spaces to fill on the boats one by one until everyone has finished. This allows everyone to have a fair shot at boarding the boats.

The boats can have between three and five spaces, with each space containing a different job. Whatever job is stated in the spot the cube is in is the job that they must perform when they land on the island. Jobs include explorers, miners, colonists, captains, and soldiers. Boats won’t sail to the islands until they are completely filled up, so it’s in your best interest to load them up as quickly as possible. If a boat doesn’t leave, the voyagers stay put in that boat until it fills up. If voyagers wanted to board a boat that gets filled up, they are placed in that player’s pub to be used next round. This is nice because it guarantees that every voyager will be used at some point. Voyagers from the pub are the only exception to the five cubes per turn rule. When boats land on the islands, they are unloaded in alphabetical order, and from front to back. This makes sense in terms of organization and in a realistic sense. It’s understandable that people in the front of the boats would get off the boats first.

As mentioned earlier, voyagers have specific jobs and therefore must be sent to the correlating locations. Explorers stay on the shore and occupy brown blocks in a path linked by arrows. Explorers set up shop in the closest available space, which means as more explorers land on the island, further blocks will get occupied. This is useful because the farther down the exploration path you fill up, the more points that become available for the end of game bonus. You can also find keys down the line that unlock island effects. Miners are placed in the mines and collect one ore each at the end of each round. Each mine has a limited amount of ore and spaces that can be occupied. Colonists head to the forest area and once four of them have gathered on one island, they form a farm and earn fifteen points. This can be done multiple times. Captains can perform the jobs of any of the previous three, which is incredibly helpful. This allows you to be flexible with your decisions and adapt to the situation, The soldiers can displace any other voyager on an island, forcing them back to that player’s pub. This is a harsh move that can really screw you up if used against you. Thankfully, once a farm has been created, none of the colonists that created it can be displaced. 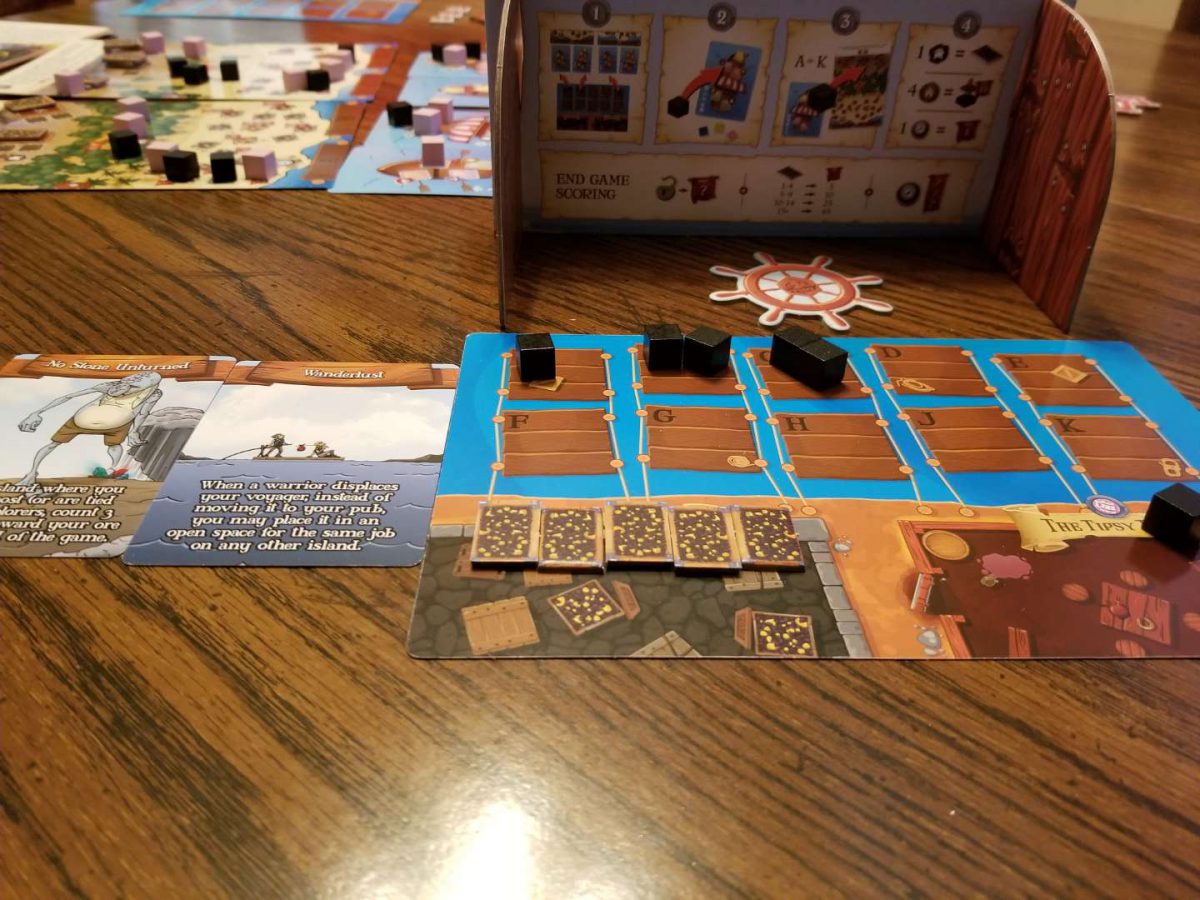 Going back to the ability cards, these can impact the gameplay immensely.These cards can do anything from letting you send a boat that isn’t full once per round, sending a voyager to a different boat than planned once per round, adding bonus points for meeting certain criteria, and much more. These cards add some interesting twists and make you consider your moves more carefully. My friend and I had a blast using the abilities that we obtained.

After all players have made their moves for the round, resources are collected and points are tallied up. Any miners in the mines obtain one ore each, which goes into that player’s warehouse. You then get one point for every explorer that you have on the islands. Embark provides points tokens that come in ones, fives, fifteens, and fifties to help you keep track. Once the points tokens are collected, any departed boats get replaced by new boats from the deck. The aforementioned steps are repeated for five more rounds, and after the sixth round, the game is over. This time, in addition to the usual steps that you complete at the end of a round, you have other points to tally up. First, there’s a chart that shows you how to translate your collected ore into points; different amounts of ore represent different amounts of points. Next, look at the flag point symbols in the exploration areas. Whatever the farthest one someone has made it to on an island is the one you use. Whoever has the most explorers on an island earns the top point value on that flag, the second highest player gets the second number, and the third gets the third number. This is done for every island, and it may drastically vary for each island. Once all of these point values are gathered, everyone needs to do their final count, and the highest point value wins. 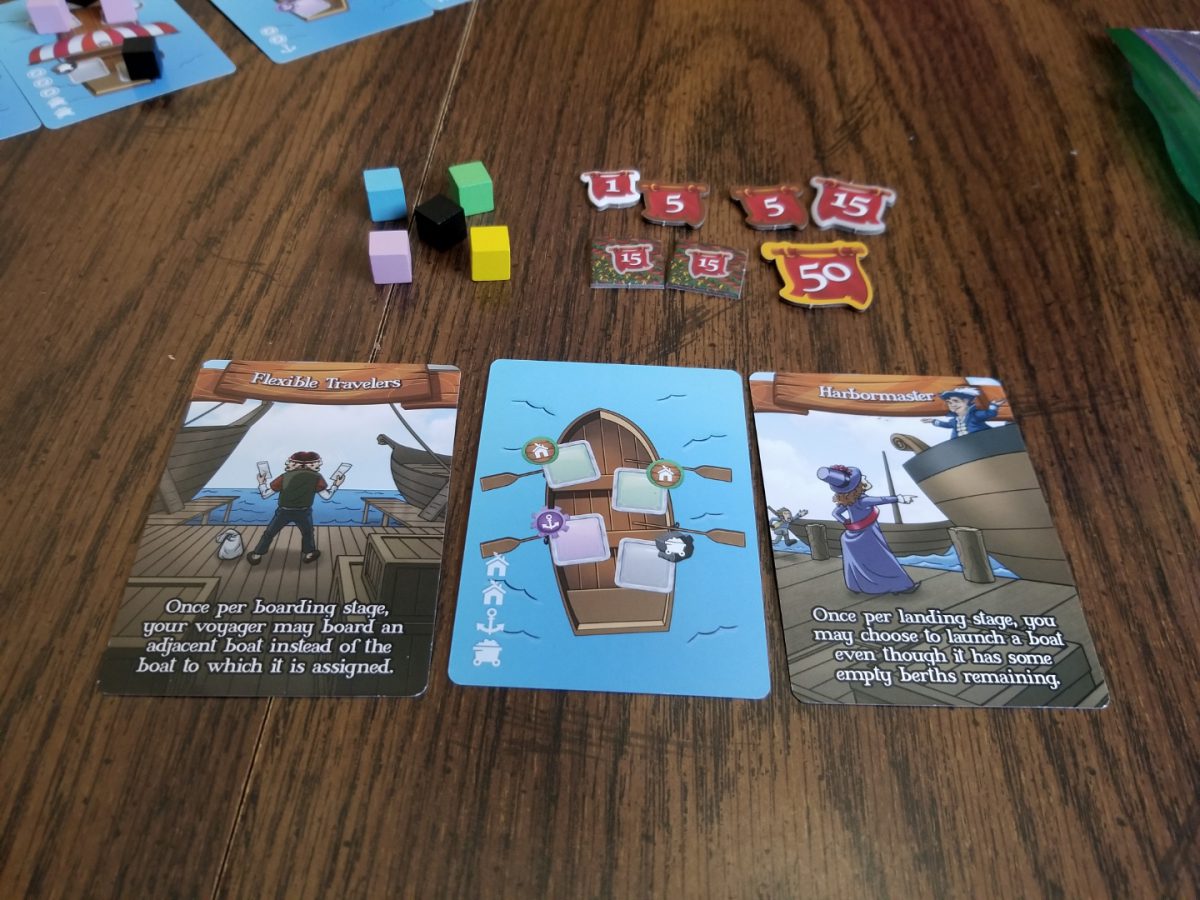 The game is well-designed, although the number of tokens required me to get ziploc bags to hold them for storage. It might’ve been better to have points sliders for each player rather than piles of tokens or at least have special bags provided to store the tokens in, but the intention was nice. The screens are effective and easy to put together, and setting up the game itself is quick as well. The island aesthetic is charming and entertaining, especially when the name of the game is setting sail. The art style of the cards is cartoonish but it puts a smile on your face. The rules take a few minutes to learn but after that the game is easy to play. Strategizing and adapting are crucial to succeeding and it feels very rewarding. That being said, I had a blast sending out voyagers to multiple islands. Embark offers an entertaining take on island exploration and it does a fantastic job for its efforts.

Embark is a tabletop game based on sending voyagers to explore islands. Various jobs provide multiple ways to earn points and achieve victory. Tokens could have been replaced with points sliders for each player, but it doesn't hurt the gameplay.

Codi loves to play video games and watch movies. He will watch almost any kind of movie just to experience them. His ideas take inspiration from the shows and movies he watches, and games he plays. He also loves a good pun.
Related Articles: Embark
Share
Tweet
Share
Submit