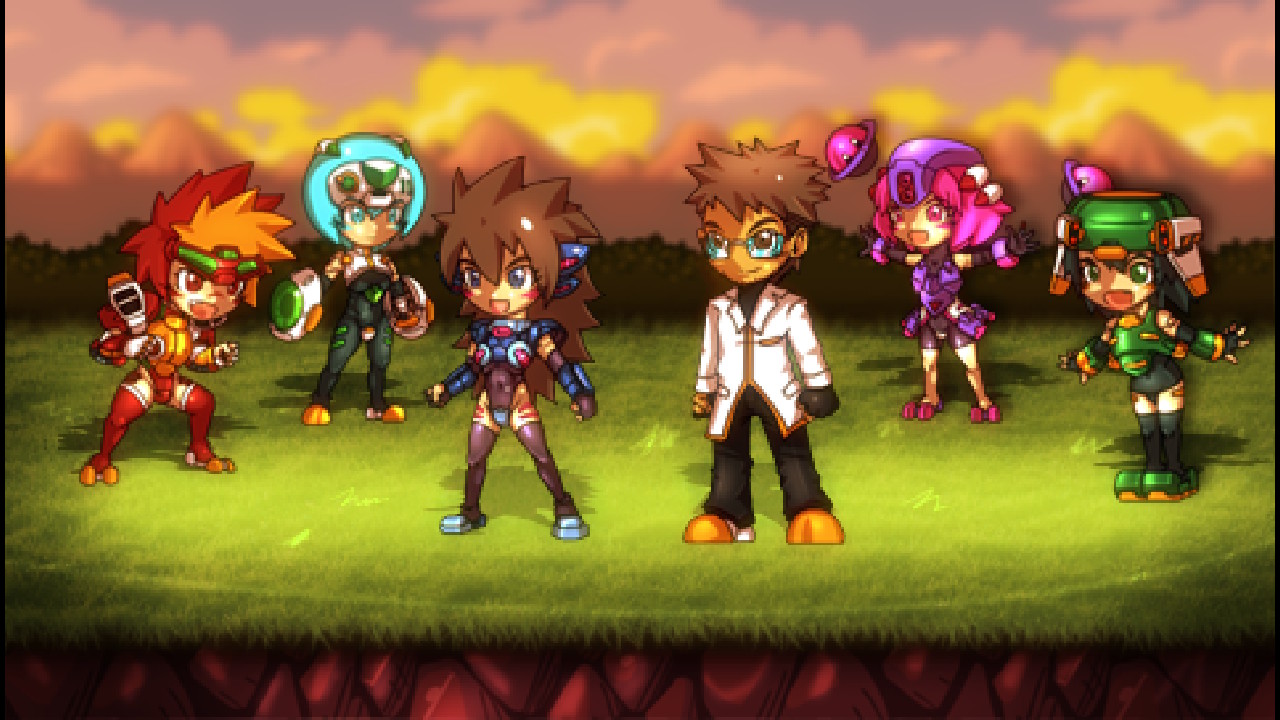 There’s a fine line between a clone and an homage in gaming, and that line has never been explored more than Mega Man. Shovel Knight was a brilliant homage, as its own mechanics were transformative enough with the influence present in the background. 20XX was an homage of the X series while giving it its own roguelike spin much to the game’s advantage. Metagal, however, is a clone, as while the mechanics differ from it and Mega Man, its similarities are a little uncanny, and that itself is more of a detriment than an advantage. 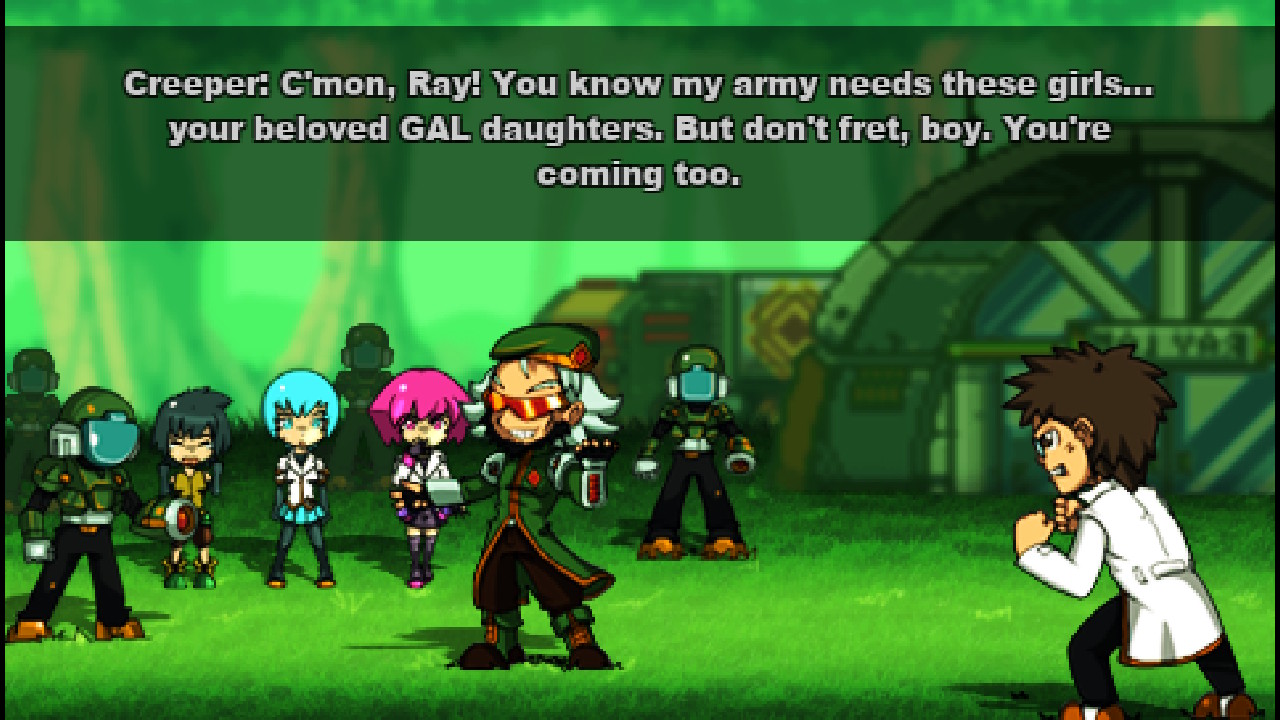 Even down to its logo, Metagal wants you to know that’s it’s a Mega Man clone but with female protagonists instead. The plot is simple: Dr. Ray has been captured by antagonists GAL.0X and Creeper in order to create weapons to take over the world. He’s also captured GAL.01, GAL.02, GAL.03, and GAL.04 to use against GAL.00, the main protagonist. Upon beginning the game, there is a brief tutorial section. When playing as GAL. 00, you are able to shoot normal shots with Y, jump, dash, and use a special attack with A. At the start, the special weapons available are a fully charged shot (that isn’t incorporated into the normal shots for some reason) and the ability to heal using Rebirth Rings. 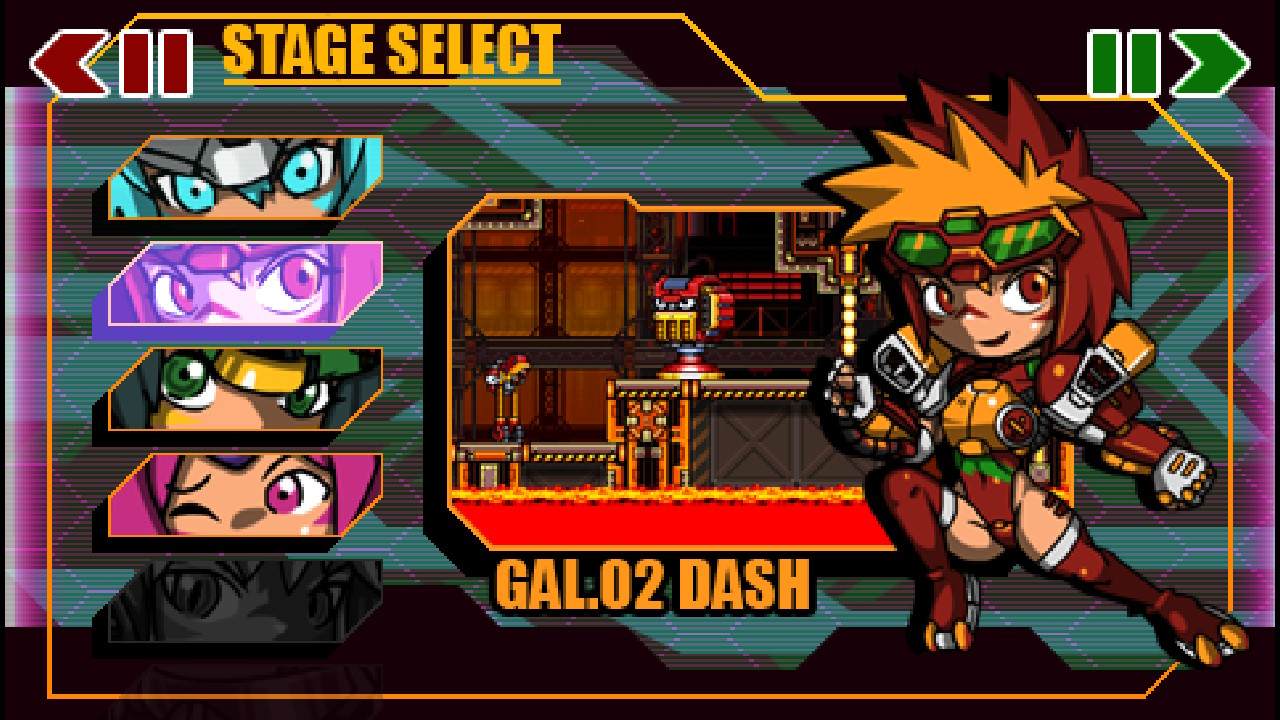 Upon completion of the tutorial, you get to one of the other Mega Man staples, the level select screen. Instead of there being 8 robot masters, you have 4 other GALs you need to beat that were once your allies. There aren’t any surprises either, as you can see the final four levels, the fortress levels, greyed out below the other levels. I completed these levels from top to bottom with minimal difficulty, so I assume it’s fairly easy to beat them in any order. 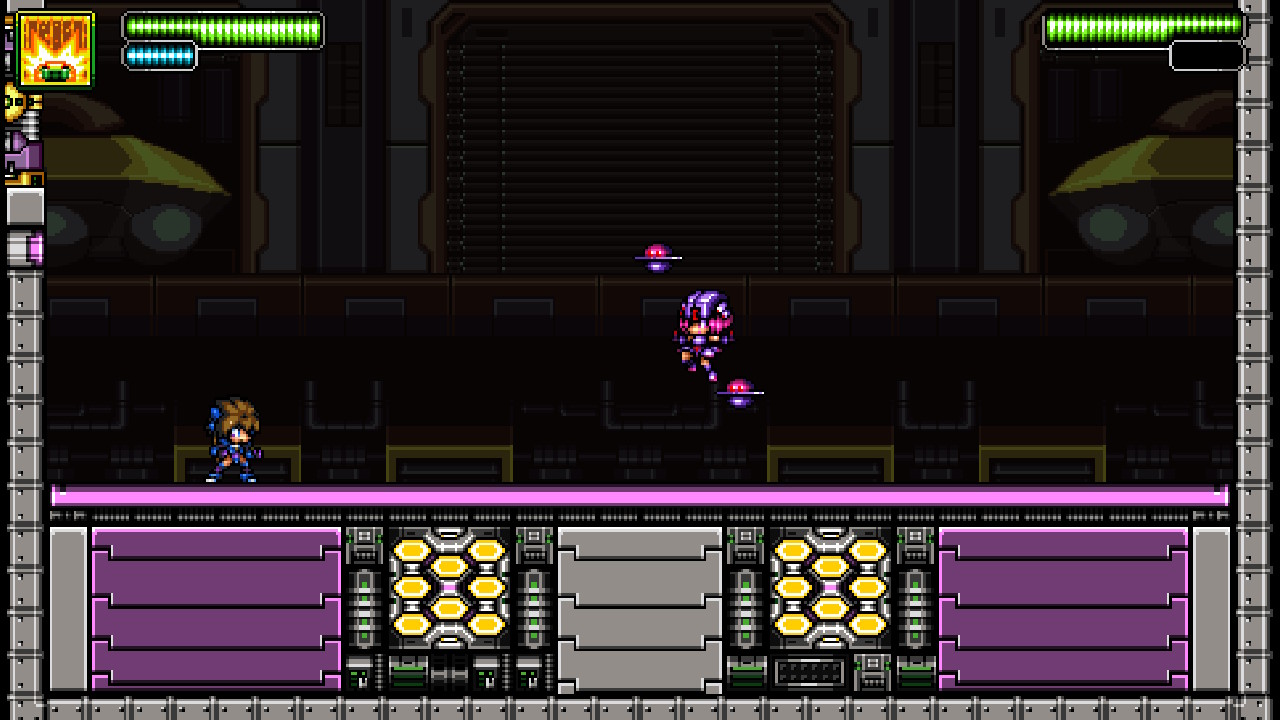 Beating each GAL gives you a new special weapon. These are taken straight from the bosses, like traditional Mega Man games, but they try to be more useful when navigating stages. One gives you a shield and the ability to shoot homing shots, another will give you a fiery dash that doesn’t seem to go through every enemy and will instead injure you if you so much as dare to experiment too close to the sun, the next will shoot two mines that will send you upward if you jump on them, and the last one will send out a bomb that either creates a black hole when it detonates or has you switch places with the enemy it makes contact with. Some of these are useful for navigating stages or finding the single secret found in the initial four stages, but their use is inconsistent at best.

The first four stages only share one secret each. Upon finding it, you will receive an upgrade in a sequential order starting with a faster recharge on your special weapon meter. This meter can be refilled instantly if you come across the pellets that do so, but by the time you run into them you’ll most likely be at full energy anyway. There are also health pellets, but the amount they heal is laughable. Lastly, we have Rebirth Rings, semi-rare items that give you a chance to restart after death on screen or heal a miniscule amount of health. 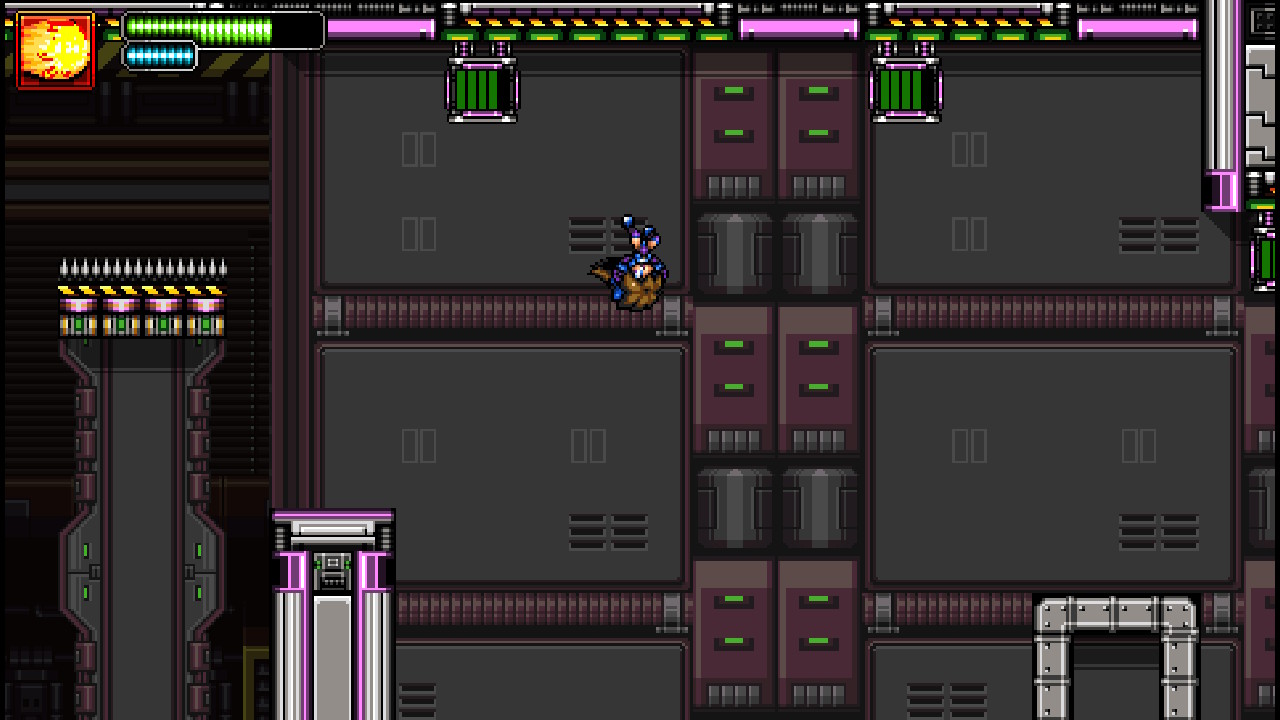 The problem with Rebirth Rings is that they bring you to the start of the room rather than the point you died. With rooms becoming increasingly longer as you play, it’s almost worth it to continue from a checkpoint (which is free) instead and save your Rebirth Rings for healing. But even healing is frustrating, as it only recovers a small amount of health and even that requires a recharge on the special weapon meter. If I were using a finite resource, I shouldn’t be punished with a cooldown especially when it heals only a few hits worth of damage. 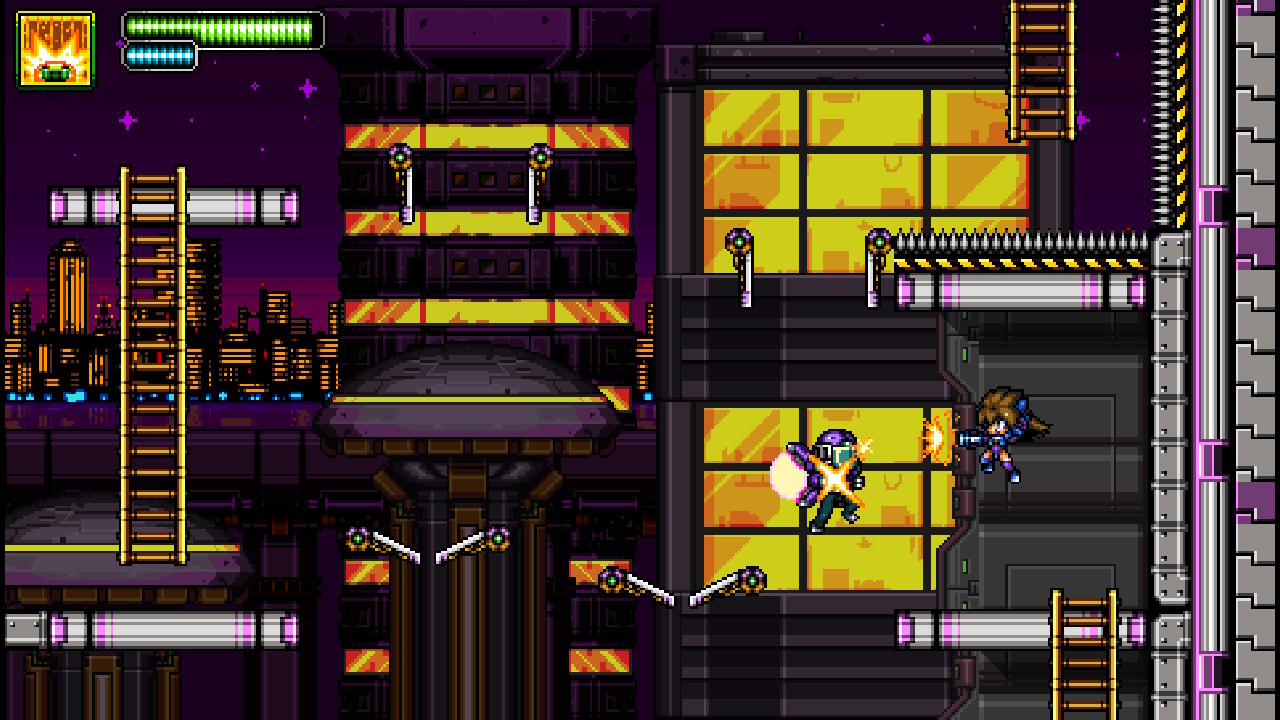 Metagal has a distinct lack of polish in the sound department. Several enemies don’t have any sound effects, actions lose their emphasis when paired with sounds from the void, and the music becomes repetitive. Obtaining items feels like I’m walking into a quickly dissipating cobweb with how little fanfare there seems to be from even the smallest ding. To make things feel even more flat, levels just begin without any introduction. If Metagal wanted to truly be a Mega Man clone but with female protagonists, they would have followed one of the most important tropes: a level intro. 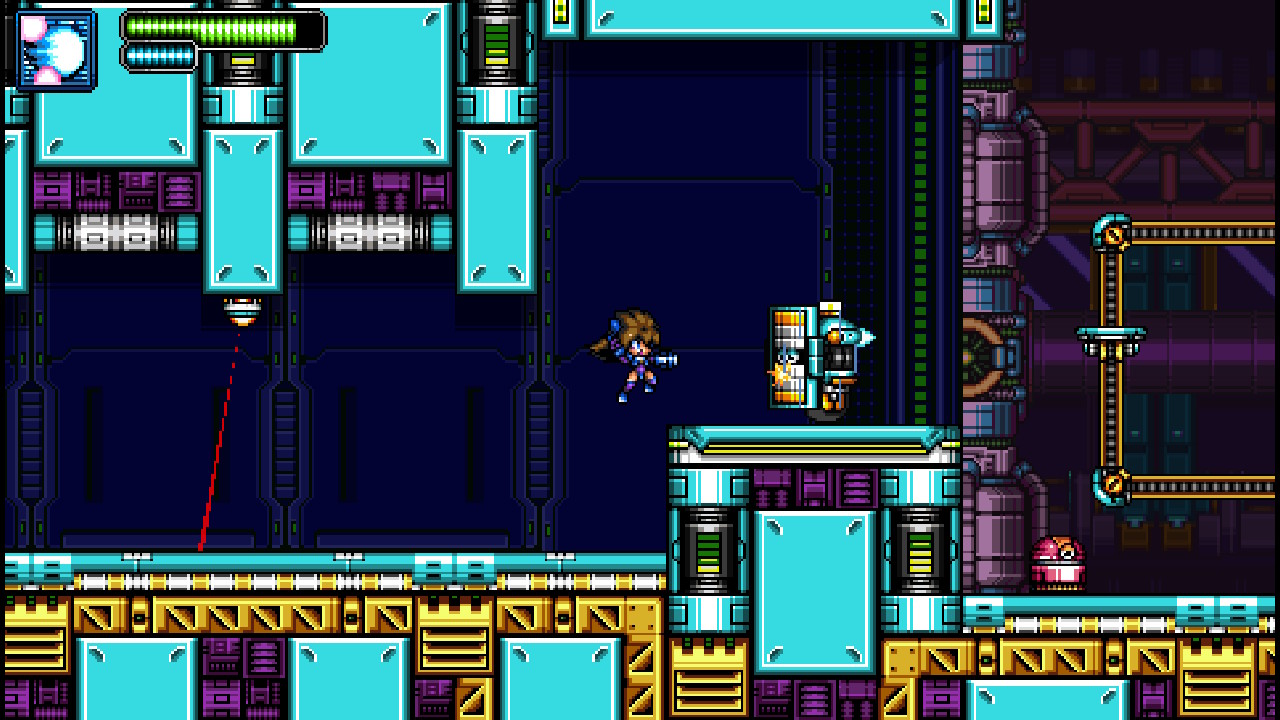 But there are times where the game feels too on-the-nose while being a Mega Man clone. The spritework is solid, especially the backgrounds, but several of the enemies feel like they were lifted from Mega Man titles and given a paint job. One of these enemies is one with a shield in front that can only be hit from behind. It jets back and forth with a horizontal eyehole, just like Mega Man’s. 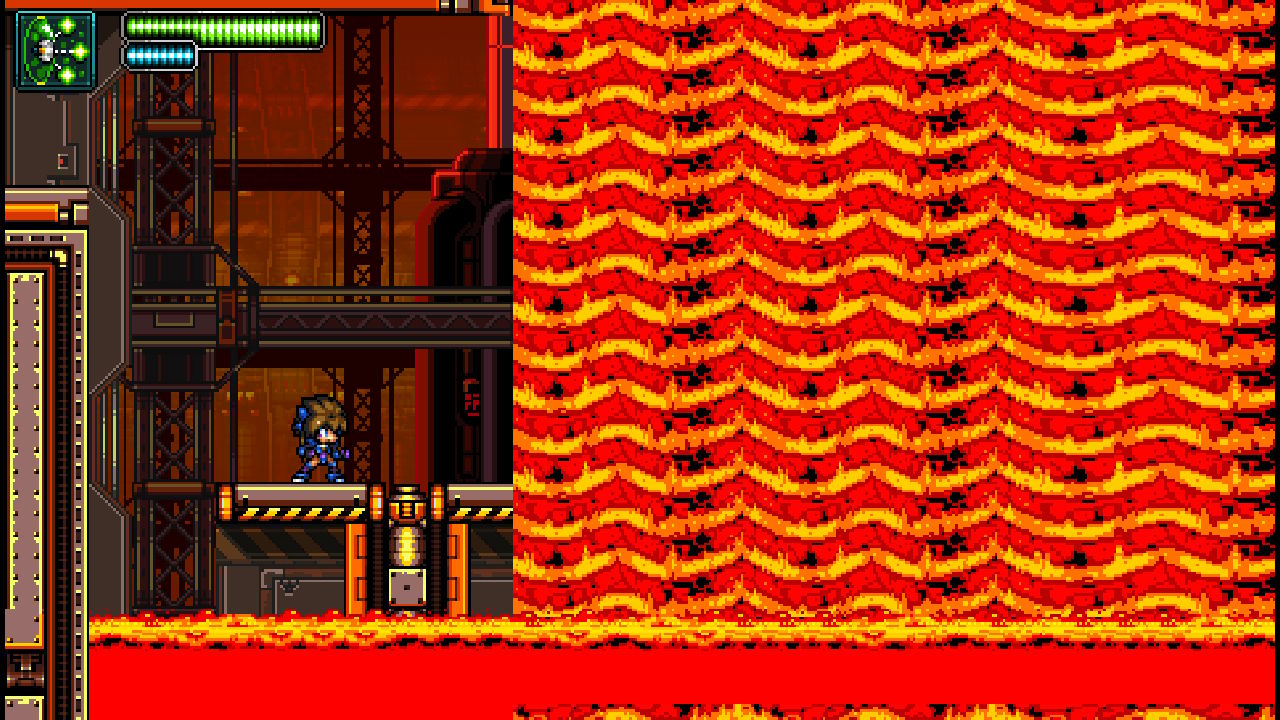 While I mentioned earlier that the game is overall on the easy side, there are moments where the difficulty spikes, and sadly, these moments are usually where the most unfair deaths come into play. One of these moments is in the lava stage where a wall of lava rains down. There is no indication that this is going to happen before it happens the first time, ensuring at least one death. In the gravity-themed levels, there are parts where the level’s gravity is inverted, but only temporarily. If you don’t reach the next spot fast enough or you jump too much, you will most likely die. Worst of all, there is a cool down before the gravity inversion comes back, and that’s often just as long as the duration it’s on, leaving you to check your watch like you’re waiting at a bus stop wondering if you’re going to make it to work on time or be fired for yet another tardy. But none of the perils comes close to the massive pain that is the final boss which relies on a single gimmick that is incredibly frustrating to pull off with a second form that doesn’t utilize the Rebirth Rings if you die. 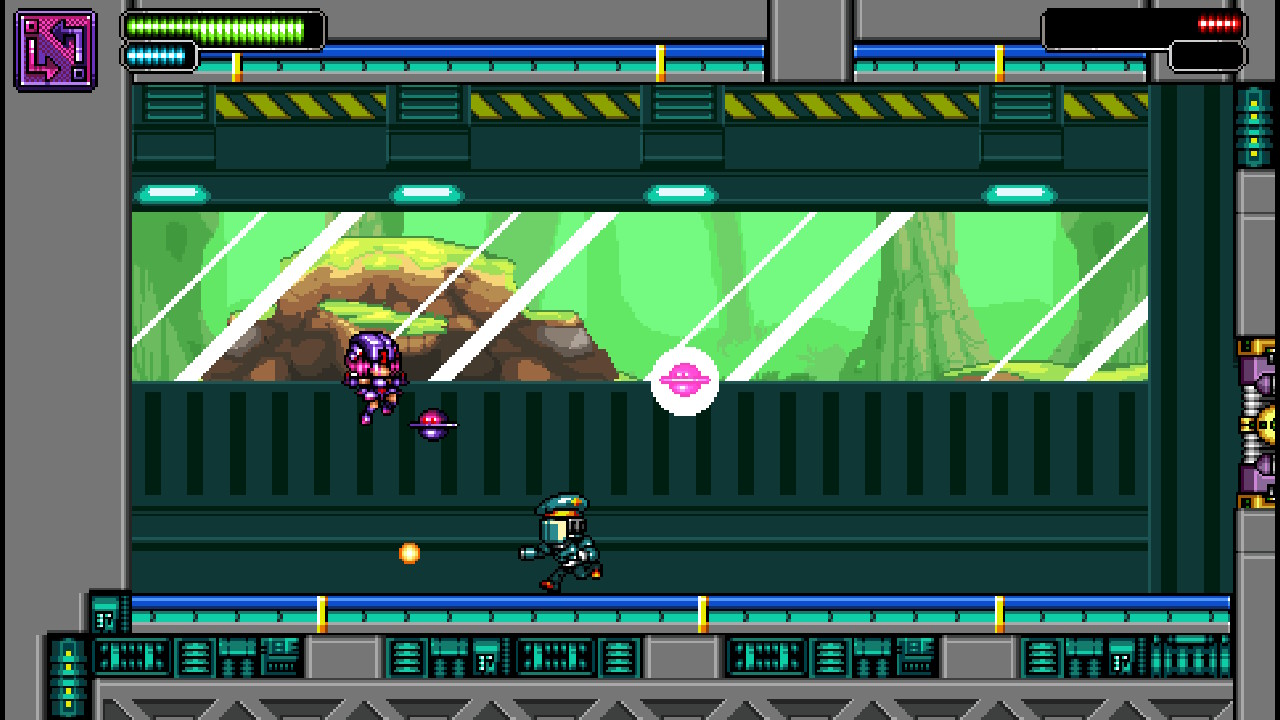 Metagal does do one thing that I absolutely adore, and that’s give access to new characters upon beating the game once. You’re able to choose from the four initial GALs, each with their own moveset such as GAL.04 having the ability to float and have orbitals around her. Their boss fight is also replaced with GAL.00, making that boss fight only possible if you had already beaten the game. Besides the intro level, the rest of the levels are the same, but the new moveset makes navigating them feel like a different experience.

In the end, the introduction of new playable characters makes it stand out from a traditional Mega Man game, but Metagal feels more like a “rip-off” at times rather than an homage or even a completely competent clone. I’m yearning for something more and something a little different, but what is there isn’t bad per-se. If anything, Metagal is worth the asking price of $5, as there is enough enjoyment in there for a few hours past the muck.

Metagal tries to be a Mega Man homage, but instead comes off as a semi-decent clone with very few original elements. The ability to play as different characters later on is a neat twist, but it doesn’t make up for the lack of sound design polish, inconsistent difficulty spikes, and the lackluster choice in specials weapons. For the asking price of $5, however, Metagal may be looking into for scratching a micro-sized Mega-itch.

Sean Anthony likes to combine two of his passions: gaming and writing. Gaming has been a huge part of his life ever since he played his first game as a child, Kirby's Adventure. He aspires to have his name attached to an article that makes the whole world go, "Huh, that's neat, I guess."
Related Articles: METAGAL
Share
Tweet
Share
Submit