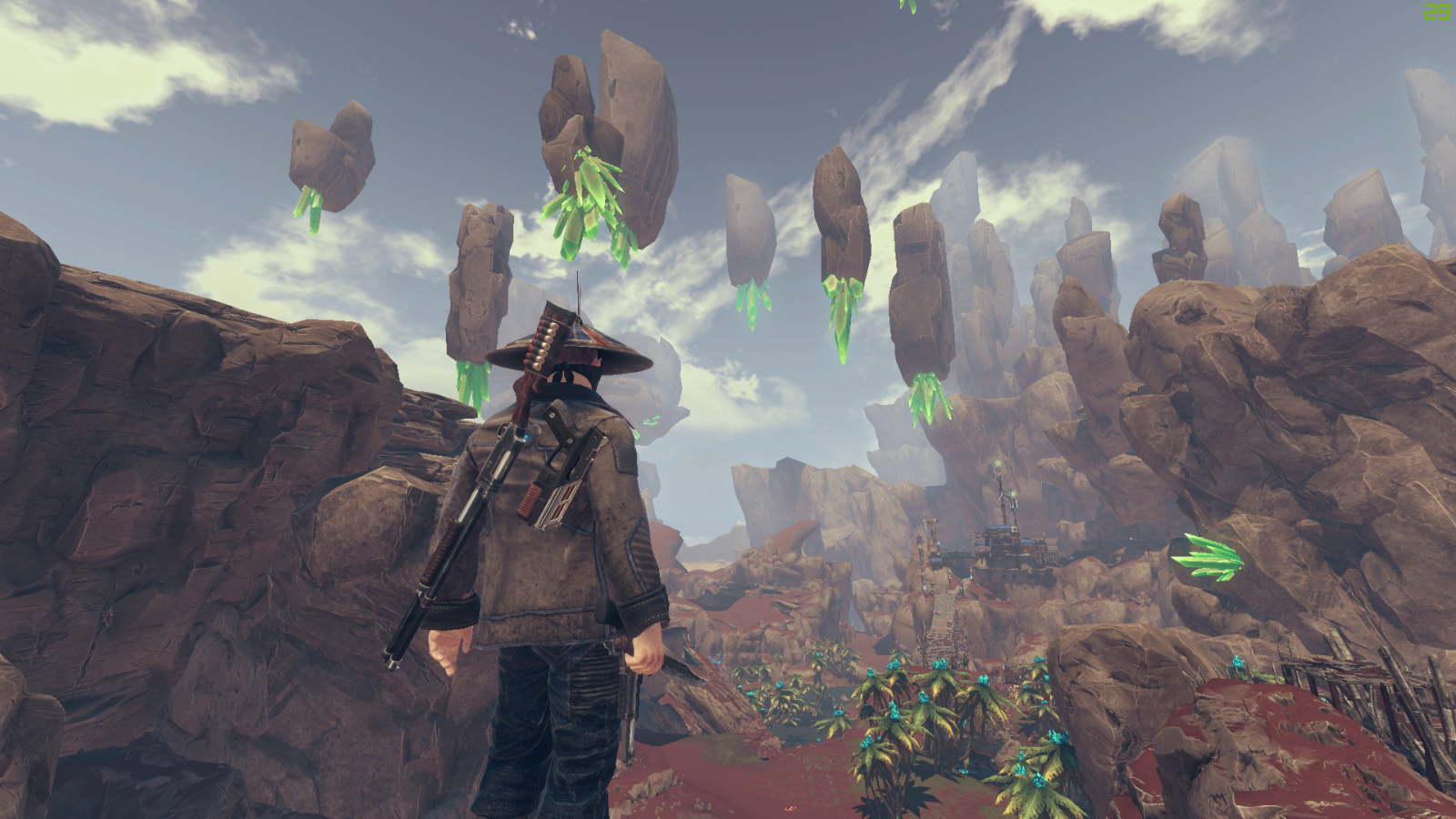 Stranded on an unknown planet with nothing but his wits and his underpants, Jack Sharp, space cowboy, sets off on a dangerous adventure to track down the thugs who hijacked his ship and left him for dead. K’Tharsis, a hostile, lawless wasteland polluted by greed and violence, serves as the setting for your tale of revenge.

Exoplanet is an early access game by indie studio Alersteam that has received a steady slew of updates since hitting Steam in December of 2016. Though I cannot dismiss the progress, Alersteam’s ambition continues to be hindered by the technical side of development. What the game wants to be is far beyond what a team of Alerstream’s size can realistically accomplish—at least any time soon.

While the story is far from complete, there’s enough available to get a solid grasp on it. After waking up in your birthday suit, you begin your journey towards civilization. Along the way, you’ll encounter a wealth of characters and enemies that will either exchange favors or fire. One thing worth pointing out is that there’s a surprising amount of dialogue, albeit little voice acting. Immediately, you can tell that this studio finds great pride and joy in writing these long, lush, often awkward, detailed lines of dialogue.

World-building is one thing that this game has in spades, and the dialogue reflects its commitment to it. The text is loaded with all manner of idioms, fancy wordplay, quirky, sarcastic comments, and tidbits about K’Tharsis and the unique individuals that inhabit it. Unsurprisingly, the studio drew heavy inspiration from the scripts of Quentin Tarantino. My only complaint is that, in their attempt to fill the writing up to the brim with wit, many lines sound awkward and unbefitting. Yet, even then it’s fairy quirky and awfully charming in its own way.

Visually, the game is incredibly dull at times, with the odd burst of vibrancy. Though it’s clear that the visuals have been polished since the game first appeared on Steam, there’s still plenty of room for improvement. While a game like Fallout pulls off the aesthetic flawlessly, the dirty, post-apocalyptic, Borderlands/Fallout-esque environments and interface of Exoplanet occasionally come off as plain unappealing, rather than unappealing by design.

The audio here is a mixed bag. The string-heavy soundtrack does wonders for my ears, but the sound effects are rather lacking. Or at least I thought they were. While they aren’t of a particularly high quality, the main issue that I discovered in my time with the game, is that any audio emitted by the player character is far too quiet. The same can be said about the enemies. Even with the music at 40% and the sound effects maxed out, the music is still overpowering the much quieter sound effects. In fact, the player’s character is so quiet that during the moments when he’d make one of his elusive remarks, it’s quite a scare since it’s so much louder than any other sound you’d hear from him.

To put it bluntly, I had serious trouble getting into this game. The first hour of gameplay was the most arduous, boring, and clunky by a country mile. You have your fists and a few flare gun rounds that you’ll quickly expend trying to down a single enemy, and later a stick, which behaves much like your fists—one attack and nothing else. The enemies get progressively harder, forcing you to wait around for your health to refill between encounters while consuming the ineffective early-game health items. Then I learned that I could circle around melee enemies to dodge their attacks and land my own, rendering them useless against me. This trick continued to work throughout the game, regardless of the size or strength of the melee-oriented foes. With no block feature or any alternate moves on any weapon (melee or ranged), and a shoddily implemented dodge, this was by far the best method of engagement.

Later on in the game, you find more ranged weapons to equip to your hip slot or your two back slots, making combat much faster and tolerable. The shotgun is by far the strongest weapon at your disposal with unparalleled damage. Even if combat options haven’t expanded beyond one melee or one ranged attack, the gunplay means that you no longer have to struggle with odd melee bugs and animation issues. New enemies also add some much needed variety, although most behave exactly like enemies that you’ve already encountered.

Yet, why do I continue to deal with such a problematic, overly-simplistic combat system? The answer: To explore K’Tharsis. Beneath its dull exterior, lies in waiting an intricate, detailed world with hidden areas, secret loot to collect, and vast optional sections. This is when the game is at its best. Again, world-building, this world that the studio has created, that’s where I believe that Alersteam has the most fun. The first time it really hit me was during a mission where the player has to control a bug to retrieve an item. The small tunnels eventually opened up into this unnecessarily huge area where the item was hiding. The studio by no means had to put in the effort to create this, but they did. While many would argue that their efforts should directed elsewhere, I for one, greatly appreciate this addition and many others throughout the game world.

The core experience is very reminiscent of older RPGs. The game is tough, doesn’t hold your hand, and forces you to explore on your own in order to solve the majority of quests. Resource gathering, cooking, crafting, sleep, food, water levels all need to be managed if you want to survive. How else are you to obtain what you need if not by veering off the beaten path? The survival elements are also never aggressive enough to force you into having one foot in an outpost at all times. The game features a pleasantly colorful quest palette, fit with unique characters, new places to visit, occasional branching paths, and self-contained, but lore-centric stories. All the systems present work together to put you into that adventurer’s mindset.

However, it’s not all golden. Plenty of resources that you’ll come across quickly become, or are immediately worthless. Quests are few, and questlines end abruptly as the follow-up content does not yet exist. Crafting is currently very barebones, with little available that would actually have significant impacts on playstyle. Cooking is equally as basic.

That’s before getting into the technical troubles. The game suffers from relatively poor optimization for an early access title, bugs on top of bugs, and glitches on top of glitches. In outposts and towns, the frame rate effectively halves and bugs take over. Small issues, such as objects disappearing and reappearing, the entire map vanishing thanks to some camera issues, and animation fumbles, are easy to brush off. Larger issues, like NPCs not balancing out trades or confirming trades, NPCs not allowing interaction, being locked onto a single interaction and therefore, unable to do anything else, and the most heinous of them all, the infinite loop of Jack getting into and leaving his bed indefinitely, require restarts to resolve.

This game oozes potential, but unfortunately, the game’s scope is far too large. The game spends too much time chasing after those lofty goals that it has set for itself, leaving the game’s most severe problems unchecked and unsolved. After a successful Kickstarter campaign and a year and a half in Early Access, most players will expect more than what’s provided, especially after the studio’s hefty promises.

Exoplanet: First Contact has the potential to tell a great story and showcase a detailed world, but as it is now, it’s only able to show you the odd glimpse of what could be, before pulling you back into a cruel reality of buggy, simplistic combat, underdeveloped mechanics impeding enjoyment, and a swarm of bugs rendering the game unplayable at times.

A self-deprecating, overly sarcastic pair of glasses that occasionally possesses a human host in order to partake in the delightful process of playing video games, then immediately complaining about them. When he is not playing games (a rare occurrence), he can be found either writing about things that no one cares about, or haunting the quiet streets of his Canadian suburb.
Related Articles: Exoplanet: First Contact, Indies
Share
Tweet
Share
Submit