Fans have waited a very, very long time for Final Fantasy VII Remake, an expansive and ambitious new look at Final Fantasy VII, which was one of the most ambitious games of its time. Featuring expansive lore, unforgettable characters, and a mostly open-world plot and a huge world which spanned four PlayStation discs, it became a legend in and of itself, and defined JRPGs for the decade. But can a twenty year old game really overcome the obstacles of fan hype, nostalgia, and dated gameplay, mechanics, and storytelling to become a success in a new century?

Final Fantasy VII Remake is much more than just a remake. It does more than simply uplift painfully dated graphics, though it also does that quite well. Remake looks at the world of Final Fantasy VII as a whole, expanding the story, shining the spotlight on classic characters, better integrates the plot points highlighted in the subsequent games and movie, and expands on the lore. It gives this world more depth and its main actors more reason to do what they do. It also does a brilliant job of telling the story while anticipating the player’s knowledge of events. 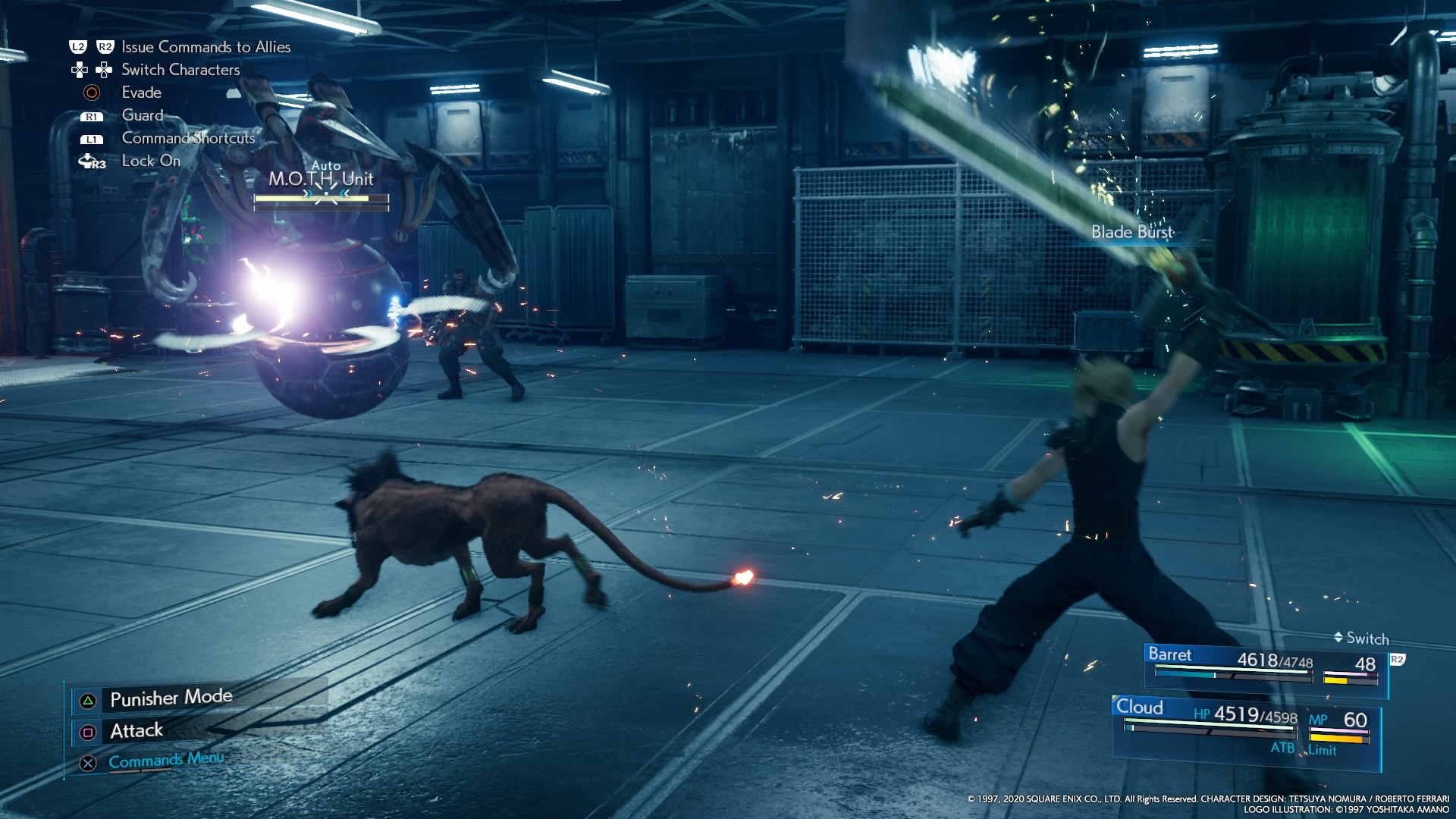 I’m a huge fan of FFVII and its world, and I’ve consumed all of the supplementary material around it, from the spinoff games to the licenced novellas, so I went in with a pretty solid understanding of what fate awaited Cloud and his friends. I know other long-time fans found frustration with the divergences, detours, and other liberties which Remake took with the plot, but I quite enjoyed them. Much like watching the Game of Thrones TV show having read the books (at least until those last few seasons), I found joy in finding my favorite characters off-script, was excited to see them in new situations, and curious as to how they would find their way back to the beaten path.

I really appreciated how each character was given their chance to shine, from the major characters who join your party all the way through to the NPCs we know and love from the original. I especially appreciated the balance struck with the Turks, who were given a much more light-hearted, comic-relief role in Advent Children. While Reno and Rude still made nods to the tropes established in the movie, they maintained the air of danger, mystery, and the more serious edge they had in the original game. The English dub, tragically, failed to emulate Reno’s infamous speech patterns from the Japanese release. 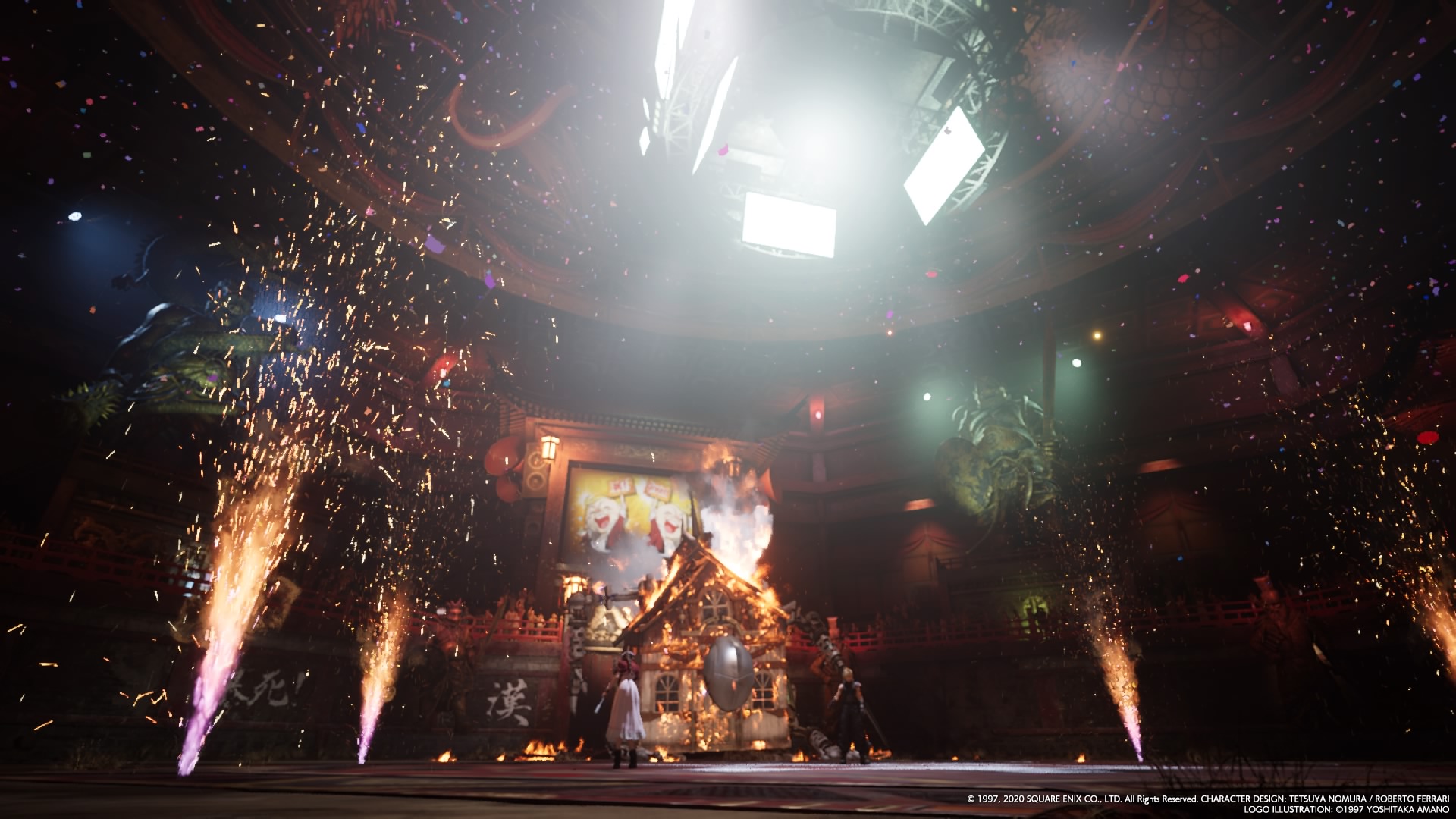 That said, not every moment of Remake hit with me. At times, it felt like it was heading a little too close to Kingdom Hearts territory in all the worst ways, but I found myself pulled back and invested, again and again, by the power of its storytelling. Much like the original, Remake is loaded with sidequests, mini games, and all kinds of different locations, scenery, and obstacles to traverse. Midgar is not, as many hoped, a truly open world for you to traverse; you’re limited to a few sectors of the slums, but by the early late game, those are yours to explore as you will. Despite their limits, slums are still sprawling and expansive, and the game even provides you with a limited mode of fast travel to help you collect every music disk and materia orb, complete every side quest, and experience every moment of Johnny. (You’ll understand the importance of the Johnny experience when you meet him.)

The bane of my childhood, the infamous bike game, has seen so many improvements that I actually enjoyed my time on two wheels. That said, not every remade part of Midgar is quite as fast-paced and fun. There are a number of side quests which can drag on, leave you double-backing, and sometimes even lost as to how to progress. Even these, I would argue, feel appropriate, given the pace of the original game, especially given that they are optional. 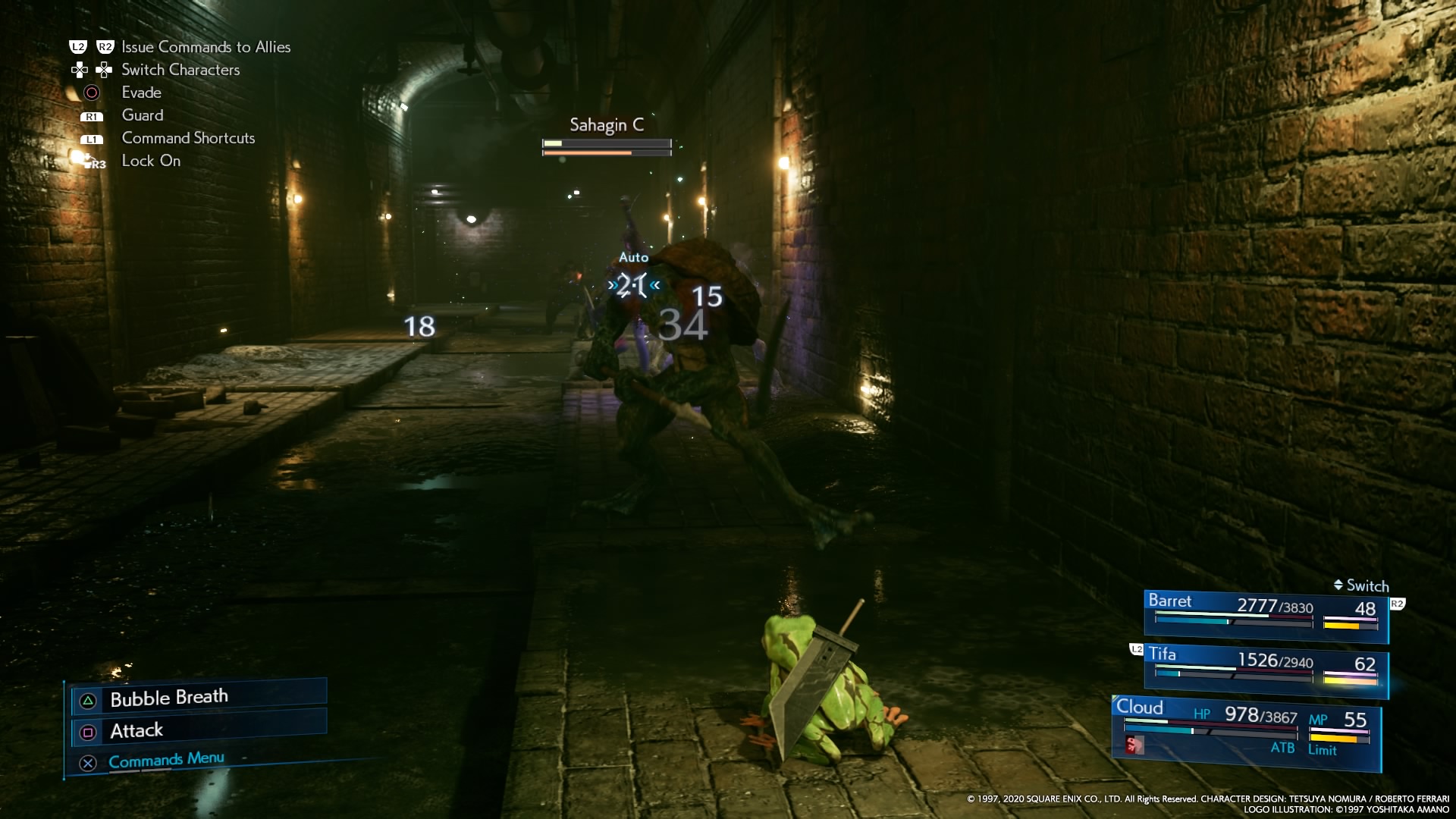 Combat is slick, quick, and requires you to be tactical in order to win. Remake gives you the freedom to play the kind of game you want to, allowing for intense action-packed fights where skills and spells are executed through button combinations, to action-based combat where time slows to a crawl while you enter commands via a menu, all the way to Classic Mode, where the game’s AI takes control of your active combatant, handling attacks, blocks, and positioning, allowing the player to focus on using spells, abilities, items, etc. This combat system is an impressive feature all on its own, accommodating FFVII’s turn-based fans while also opening the game to fans of more modern, fast-paced combat.

In a nod to the old, the classic blue menu of the original game is back, but it has been upgraded with a sleek new style and a modern flare. Pro tip: when the menu is open, you can hit triangle to save without having to scroll all the way to the bottom. You’re welcome. I would also be remiss if I did not mention my love of the new Weapons Upgrade system, and the fact that it makes every single weapon in the game both useful and viable. There really was no feeling quite like taking on the final chapter of Remake with the Buster Sword in Cloud’s hands, and knowing that I was not sacrificing attack or materia slots when doing so. 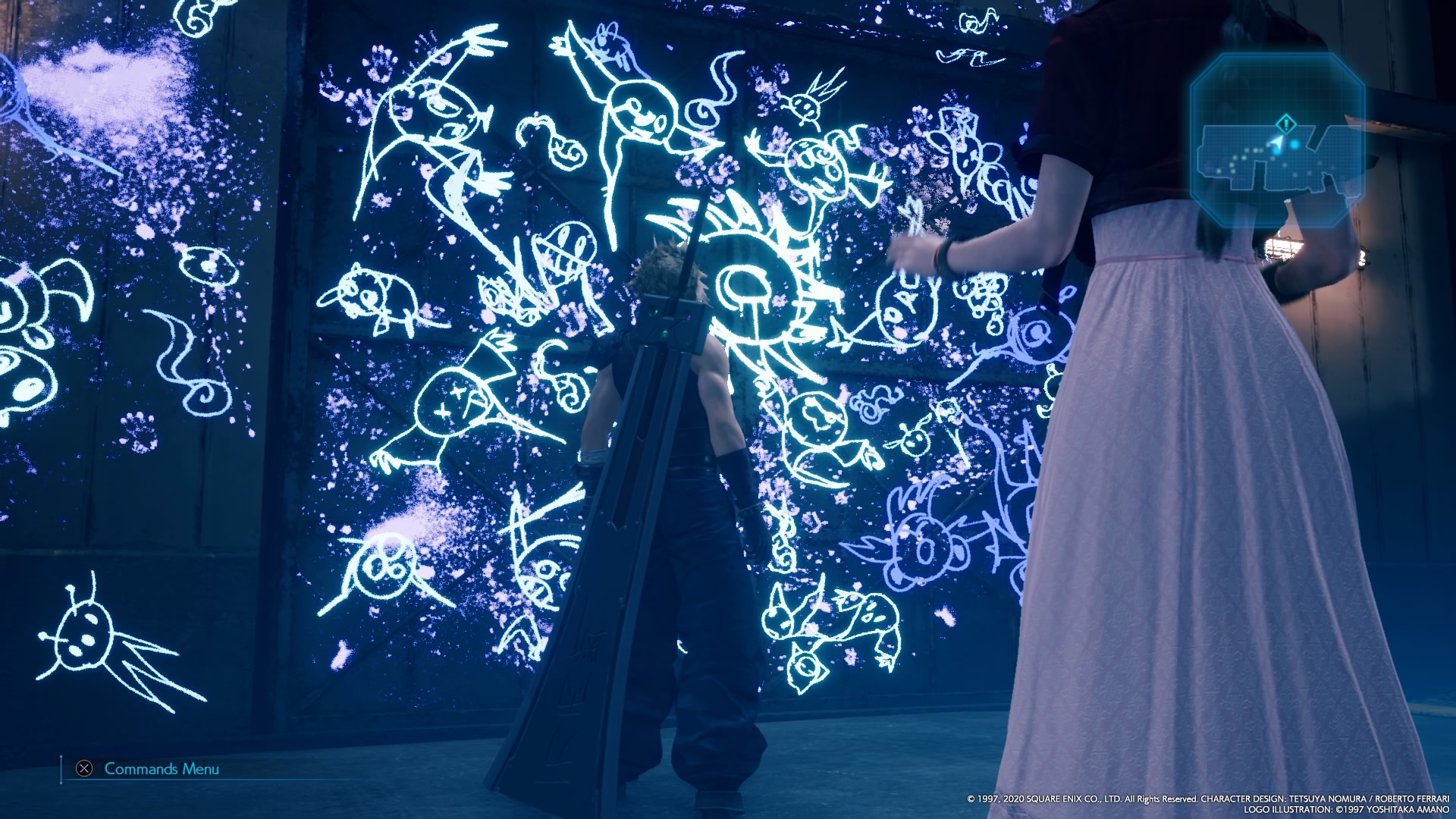 Graphically, Final Fantasy VII Remake is dazzling. It’s beautiful, it’s ugly; it’s beautiful even when it’s ugly. Most impressively, it remains beautiful and smooth even when played on a base PlayStation 4. I experienced exactly one hitch in framerate the entire playthrough. The voice acting is stellar across the board, as is the music. The melodies of some tracks have been faithfully recreated with a full orchestra, while others have received edgy or modern remixes, breathing new life into one of my favorite playlists. The theme song by Survive Said the Prophet took on new meaning, and became a must-have track as the credits rolled.

It took me just over 35 hours to complete my playthrough of Final Fantasy VII Remake, and I was left feeling excited and energized; much like when the credits rolled after a good Avengers or Star Wars movie. I know the story is not complete, but it felt like a good place to pause, and left me eager to see how the next chapter will unfold, and gives me time to savor a few of the surprises it left me with. While the playtime comes up short compared to the original, the quality oozing from every minute of Remake certainly makes up for it. While I wasn’t a fan of everyone of the games addition and alterations, I could still see the value in them. Besides, I still have a lot more to do: getting all three dresses for all three characters at Wall Market, hunting down a few stray weapons and orbs of materia, and chilling out next to a jukebox while I soak in all the tracks from those sweet, sweet music disks. Now we just have to hope that we won’t have to wait five years for the next installment.

Final Fantasy VII Remake is more than just a remake. It stays true to the core elements of the original game, while also exploring, expanding, and breathing new life, depth, imagination, and personality into an already outstanding world and cast of characters. While it is a little light on playtime, settling in at around 30-35 hours for a playthrough, it is bursting with quality and feels like a complete game, a full experience that is just waiting to be continued. It weaves together the familiar with the new, and adds entirely new elements, personalities, and modern storytelling flare to a beloved classic. Remake is a beautiful game, and a must-play for those who lived the original, who have always wanted to experience the world of FFVII, and just about any JRPG fan out there.