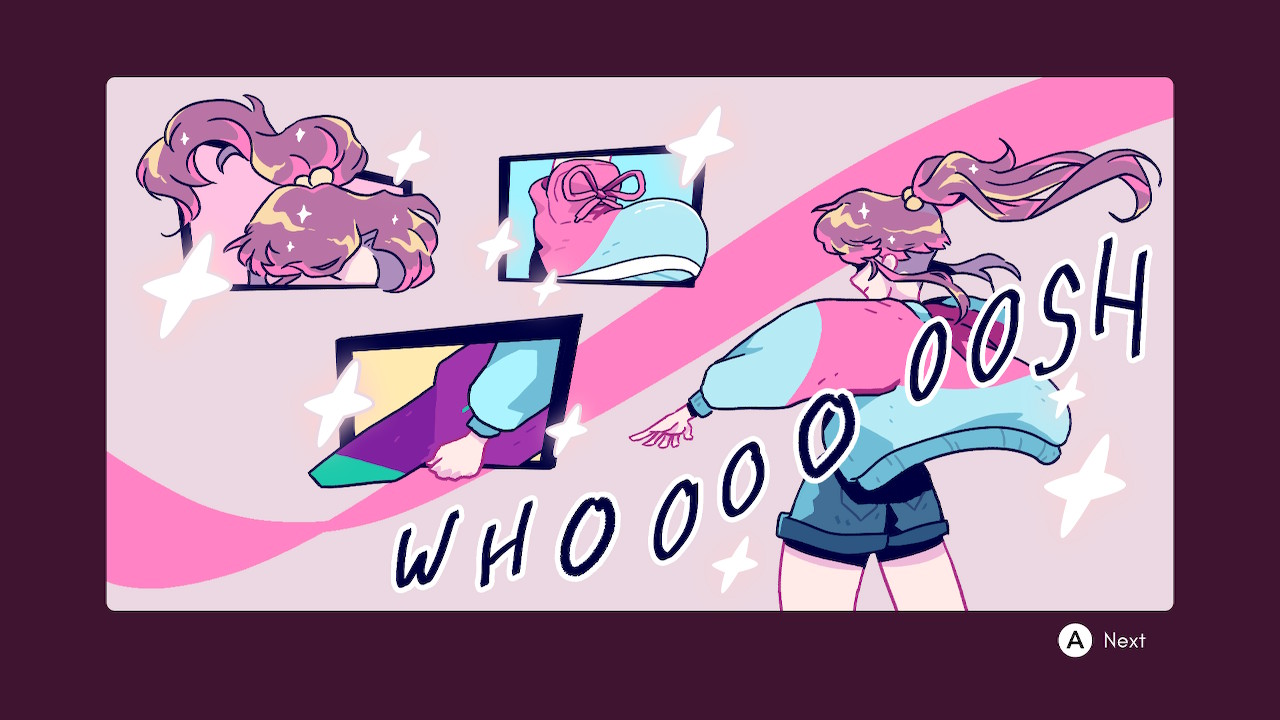 You’re lying on your bed browsing social media on your phone, your cat lying peacefully nearby, when suddenly a green alien demon lady blows open the wall of your apartment and kidnaps your cat. You’ll have to stylishly beat up the robot army standing between you and the mysterious kidnaper to get Chubbz… Oh, and save the world from an alien invasion I guess, but that’s less important.

I’ve talked before about my love of the Character Action genre before, see our Astral Chain review, it offers a kind of style and flow you can’t get anywhere else. In that review, I talked about how Astral Chain would be a good entry point into the oftentimes complicated genre, now we have an even better entry point: Super Crush KO. The game is a side scrolling platformer with combat mechanically similar to Devil May Cry or Bayonetta, you’ve got your launchers, invincible dodges, gap-closing dashes, it’s all here and it all looks cool. 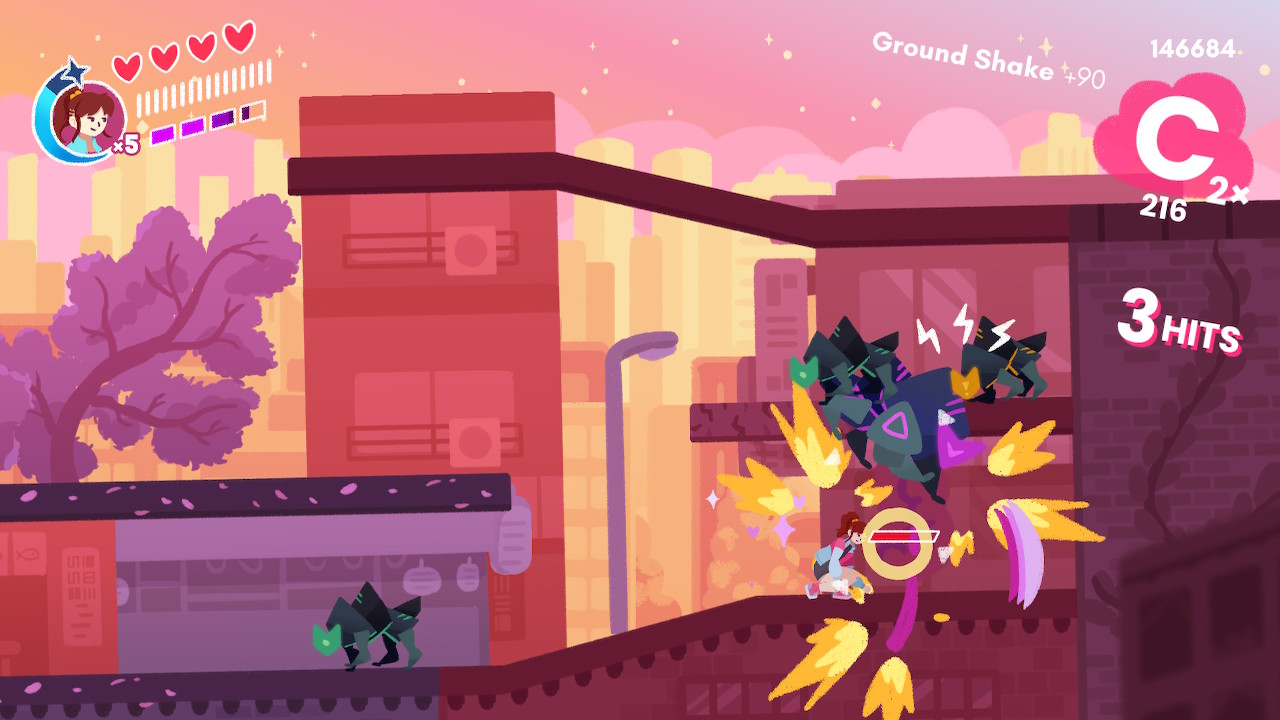 First off, you’ve got a standard four hit combo using the Y button on Switch, this is your bread and butter as it doesn’t use any resources and you can hold up to change the combo into launcher. Next, you’re equipped with the laser gun the alien lady dropped while catnapping. You can use this to continue your combo while moving closer to enemies or keep them held in the air, but it’ll overheat if you use it too long. Finally, you’ve got four special moves, a ground dash, an air dash, an armor breaking ground slam, and a giant laser super move. The first three each use a chunk of a purple meter which refills with purple gems dropped by defeated enemies or regenerated over time, and the last uses a meter filled with blue gems also dropped by enemies.

Karen’s (that’s you) moveset might not have the breadth of her contemporaries, but it’s certainly not lacking in depth. Combat feels fluid, you can go from almost any attack straight into another one or a dodge, and it’s easy enough to understand that you’ll be kicking robo-booty very quickly. This brings us to Super Crush KO’s biggest asset as well as its biggest problem: its length. It’s only a few hours long, which is short enough to encourage replayability for that coveted S rank on each stage, but it feels like it’s over a bit too soon. There are four worlds, each consisting of four stages and a boss. The game is constantly adding new enemies or stage gimmicks, but nothing really takes the combat or platforming to the heights this combat system feels like it could reach. There’s also no difficulty options, so it’s fairly easy all the way through, though there is a well thought out difficulty curve and I did die around 5 times in my playthrough. Finally, despite the clear and gorgeous 90’s anime inspired art style, it’s difficult to tell when your dodge comes off of its short cooldown. Karen will flash white when it does, but you move around so much that she just becomes a blur of pink and blue that it’s hard to see. 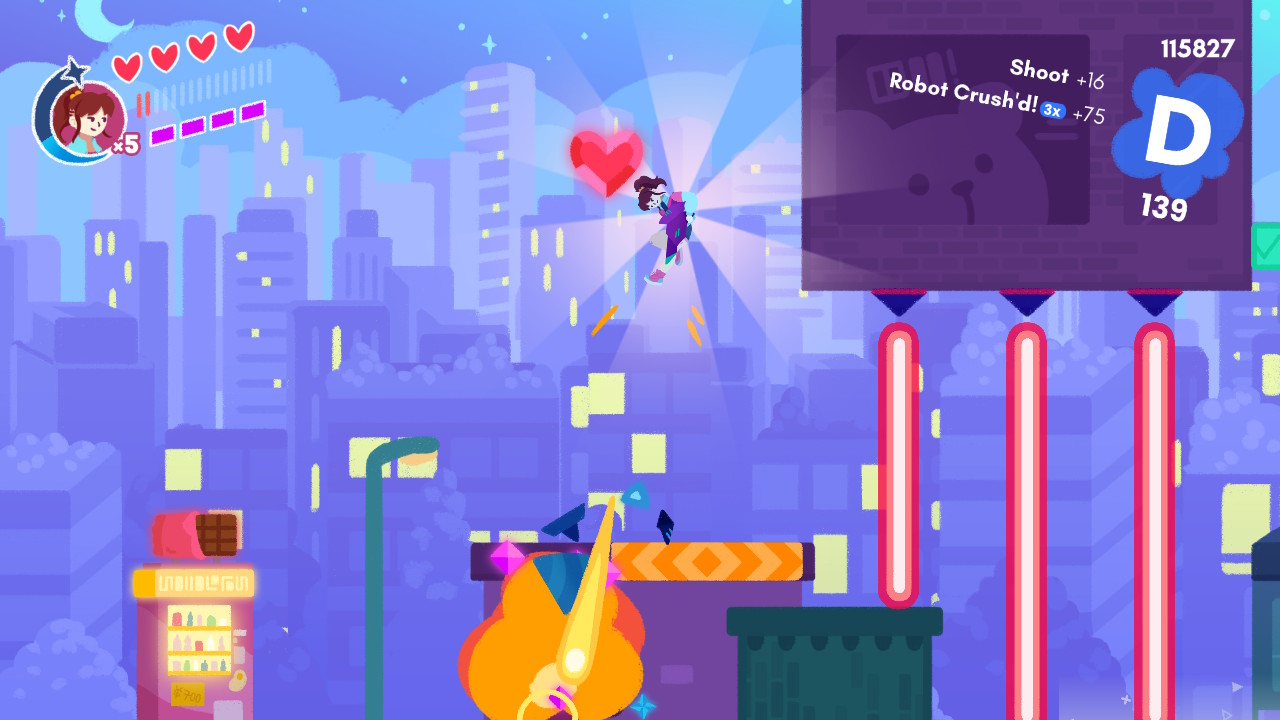 Speaking of the 90’s inspired art style, I’ve been rewatching Sailor Moon lately and the game matches that show’s color scheme perfectly. The art used in cutscenes does look way better than actual gameplay, but it’s all still nice to look at with its myriad of pastels. The music isn’t as great unfortunately, it’s forgettable and sounds like some generic synth. Sound effects also don’t feel quite punchy enough and fade into the background. It’s also very light on plot, which is to be expected given the ridiculous premise, but it’s cute and ends in a satisfying way.

Super Crush KO is an incredibly fun, if short and easy, character action game. It’s as ridiculous and over the top as its contemporaries. Combat has a lot of depth, while remaining simple enough for beginners to pick up or veterans to enjoy.

David is the kind of person to wear his heart on his sleeve. He can find positives in anything, like this is a person who loved Star Fox Zero to death. You’ll see him playing all kinds of games: AAAs, Indies, game jam games, games of all genres, and writing about them! Here. On this website. When not writing or playing games, you can find David making music, games, or enjoying a good book. David’s favorite games include NieR: Automata, Mother 3, and Gravity Rush.
Related Articles: Super Crush KO
Share
Tweet
Share
Submit