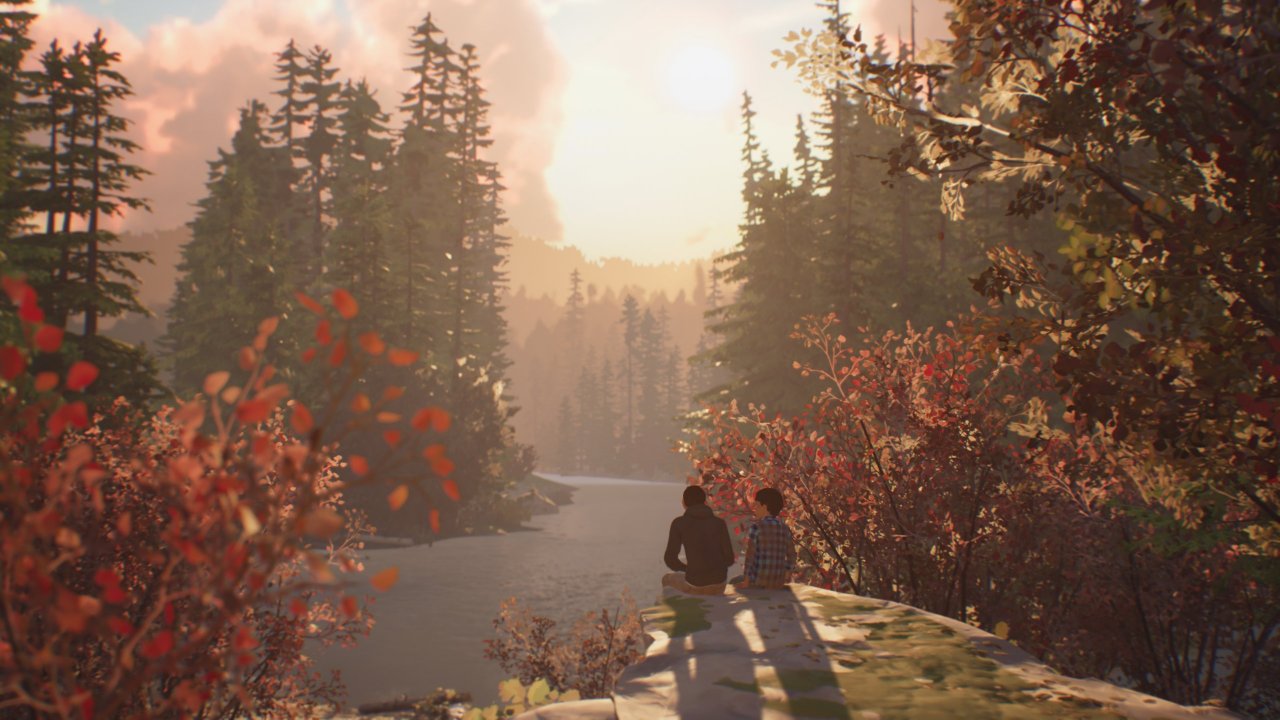 Life is Strange 2: Episode one gets off to a rocky start. The banter between protagonist Sean and his best friend Lyla is awkward. Lyla isn’t a bad character, I find her much more manageable after the beginning segment, but hearing her call Sean a “thirsty bitch” and hearing how she gets so “emo” sometimes while Sean is rocking a Squad hoodie, is a clear indication that this segment was written through the lens of an adult speaking as a teenager, not representative of actual teenage banter. Thankfully, the dialogue gets dramatically better after this first segment.

The scene that really kicks off the game and sends Sean and Daniel on the run is bad. It is caused because everyone is stupid which just makes it feel forced. It’s almost Halloween so Daniel made some fake blood out of corn syrup which he ends up spilling on the neighbor, which leads up to him being mad, which catches Sean’s attention, and you can either choose to question Daniel or confront the bully. If you choose confront, it pretty much just turns into a pushing match and Sean shoves him so he accidently trips, lands on a rock, and has a seizure. That’s random and stupid. Then a cop shows up and he is also stupid. He sees some kid having a seizure on the ground so what does he do? What any good cop would do of course! Pulls his gun and threatens the two unarmed kids instead of helping the kid having a seizure. This is what kicks off Daniel and Sean being on the run. When an entire scene can only happen because of dumb luck and everyone being stupid then it isn’t a very good scene.

Leading Daniel through the woods is an excellent bonding experience.

Once you power through this opening, however, the game gets good— really good. Sean and Daniel alone in the woods opens up some great interactions rife for characterization. I really felt Sean’s plight and I wanted Daniel to be safe at all costs. They banter back and forth, and as an older brother myself, this felt very relatable. I also enjoyed all the bonding opportunities this scenario created. Since I’m not an emotionless robot, yet, I chose to be as nice to Daniel as I could. This lead to moments of teaching; from how to skip rocks, to building a base together. and allowing him to name a dog Mushroom. Okay, I was vehemently against that last one. These happy moments during the chaos are fantastic and keep the tone from becoming too depressing.

Another good way to take a break is to just let Sean think for a bit is to sit down and draw, or just enjoy the view. Life is Strange 2 isn’t impressive graphically from a technical standpoint, but the unique art style makes leaning back, looking at the trees a relaxing and enjoyable experience. Of course, nature isn’t the only thing Sean and Daniel have to worry about. It turns out, some people can be pricks.

It’s nice to take a break to observe and draw the beautiful scenery.

Of course, being on the run is difficult. Sean has to worry about money for buying food so they don’t starve to death. I like the idea of this mechanic as it can lead to tense situations in the future between stealing, begging, and buying necessities. Right now, however, I can’t judge how well it has been executed. It only really comes up in once scene, but I do like the idea. Another aspect that is too soon to judge is just how your choices shape Daniel. This is only episode one, so my choices aren’t really apparent just yet. They definitely weren’t black and white however. The choices felt meaningful and I can tell that they are all going to culminate into something; I’m just not sure what yet

Life is Strange 2: Episode one is a good start to an interesting adventure. The beginning is terrible and the political statements feel forced, but the dynamic relationship between Sean and Daniel is relatable and enjoyable. Episode one has flaws, but I’m excited to see what happens next.

Life is Strange 2: Episode one is a good start to an interesting adventure. The beginning is terrible and the political statements feel forced, but the dynamic relationship between Sean and Daniel is relatable and enjoyable. Episode one has flaws, but I’m excited to see what happens next.

Austin Fern has been playing video games his entire life. The first console he truly fell in love with is the PlayStation 2 with Sly Cooper, God of War, and many others really leaving an impression. He enjoys all genres of games from FarCry 5 to Danganronpa and everything in between.
Related Articles: Life is Strange 2
Share
Tweet
Share
Submit