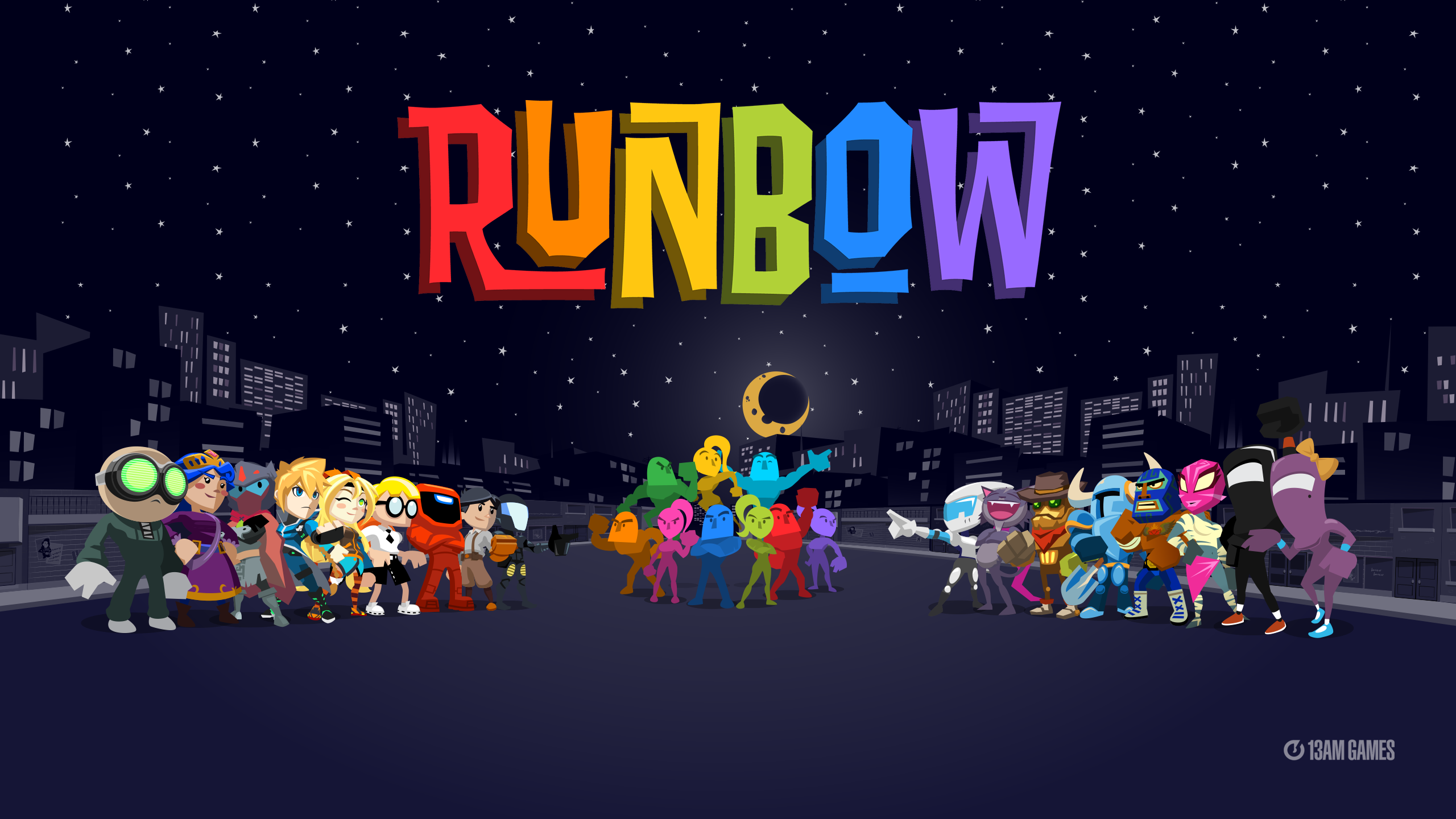 In concept, Runbow seems like a fun idea for a video game. Nine-player local multiplayer always looks great when you’re watching a group of game journalists play on a livestream. But in the real world, getting together nine friends–even three or four–is a difficult task. So that leaves you largely with the single-player experience and online multiplayer, neither of which are worth sinking a ton of time into.

Runbow is a 2D platformer where you run, jump, and punch your way through an ever-changing series of levels. You play as either Hue or Val, or any number of unlockable characters like Juan from Guacamelee and Shovel Knight from, well, Shovel Knight. The characters and costumes are pretty vivid, but are offset by the pastel color scheme for the rest of the world, which made it feel less vibrant and more drab. The music is an eclectic mix of big band-style swing, elevator jazz, and salsa. But there aren’t that many songs overall, so you will hear the same short tune over and over again.

Playing Runbow also feels like a bit of a messy painter’s palette—with some bright spots among a mostly muddled experience. There are several modes to play in Runbow. The single-player mode is your run-of-the-mill series of levels that get progressively more difficult as you advance. The main mechanic is that the background changes colors from red to yellow to green and so forth by sliding vertically or horizontally across the screen. When this happens, walls and platforms of the coinciding color will disappear and then reappear when the color advances. From level to level, the order and variation of colors seemed to change and made it difficult to determine what color was coming next, and subsequently, what platforms and walls were going to disappear. For the most part it felt like a crap shoot. I would just double jump and uppercut boost my way across various gaps and obstacles and hope for the best. You can cover a lot of ground (or air) with the double jump/boost combo, so many of the changing platforms didn’t even come into play.

The Bowhemoth challenge mode was a surprisingly fun distraction. Your character is swallowed whole by a massive T-rex/blue whale-looking monster, and you must escape through the bowels of the beast. There is no saved progress, so the challenge must be completed in one sitting. Luckily there are checkpoints and you don’t have to start over from the beginning after each death. Personally, I made it to the fourth section and 79 deaths before I had seen enough of the Bowhemoth challenge. The gameplay feels different because they knock the color palette down to just red and white, and change the speed and variety in which the colors move across the screen. In one instance, bold stripes of red and white moved across the screen like a candy-cane train. The red and white platforms in the level disappeared and reappeared as their corresponding colors passed. This made it so you have to change up the speed at which you play. Sometimes you had to keep pace with one color to jump from platform to platform, while other times you had to move faster and jump to where there was nothing anticipating the platform that would materialize under your feet.

The online multiplayer suffers thanks to the Wii U’s subpar infrastructure and player base. There are some definite framerate hiccups, and even some games where myself or other players would be locked into an animation and it looked like the character was just sliding across the screen. There are three modes available in online multiplayer: Run, Arena, and King of the Hill. Run is by far the most popular mode. The other two (despite several tries) couldn’t garner enough players to begin even a single match. Run, on the other hand, had little problem filling a room of nine players. During these races there are a lot of chances to see the death screen, which are snippets of text that degrade you. Some of them are charming and funny like, “Don’t do drugs” or “Is this real life?” While others are more cliche such as, “Do you even lift?” So…there’s that.

Run is fun. All players start on one side of the screen, sometimes on the left and sometimes on the right, but all players on the same side. Everyone is standing on a platform, which are stacked on top of one another. It looks a lot like the starting gate of a horse race. 3…2…1…Go! and everyone is off to the races. The goal is simple. Get to the trophy across the level first and you win. The execution of said goal, however, is far more difficult and engaging than that. The same group plays a set of 10 races, and whoever has the most trophies wins that game. There are power-ups players can grab along the way that mess with their opponents, like a set of boxing gloves that can blast players off screen to their deaths when punched, or a teleporter that allows a player to swap places with another. The teleporter is a game-changer, kind of like the blue turtle shell in Mario Kart. More than a few times I saw players just about to grab the trophy at the end only to be sucked backward as the other player swaps places with them and grabs the trophy for the win.

Run, Arena, King of the Hill and Colour Master are the four modes available for local multiplayer action. Here’s the problem: all of the modes are a lot more fun based on how many people you have playing. I have a difficult time, as a working adult, to just make nine friends, let alone have all of them over my house at the same time to play a video game. None of these modes are fun with only a couple of people, so without a big group to play with, a large part of the the appeal of Runbow is left without a platform to stand on.

Ultimately, Runbow disappoints. Bowhemoth is a fun distraction. Single-player is a pretty traditional and unimaginative series of levels that only major platforming fans will maybe enjoy. And online is a hit or miss (mostly miss) collection of modes that is fun for a little while, but falls under the shadow of the Wii U’s insufficient online multiplayer ecosystem.

On December 5, 1986, Josh was born into this world pink-faced and squalling. His only thoughts were, "WHAT IS GOING ON? WHO ARE ALL OF THESE PEOPLE? AND WHY THE HELL AM I NAKED?" 19 years later he bought an Xbox 360 and now plays and writes about video games. Life is funny that way.
Related Articles: Runbow
Share
Tweet
Share
Submit