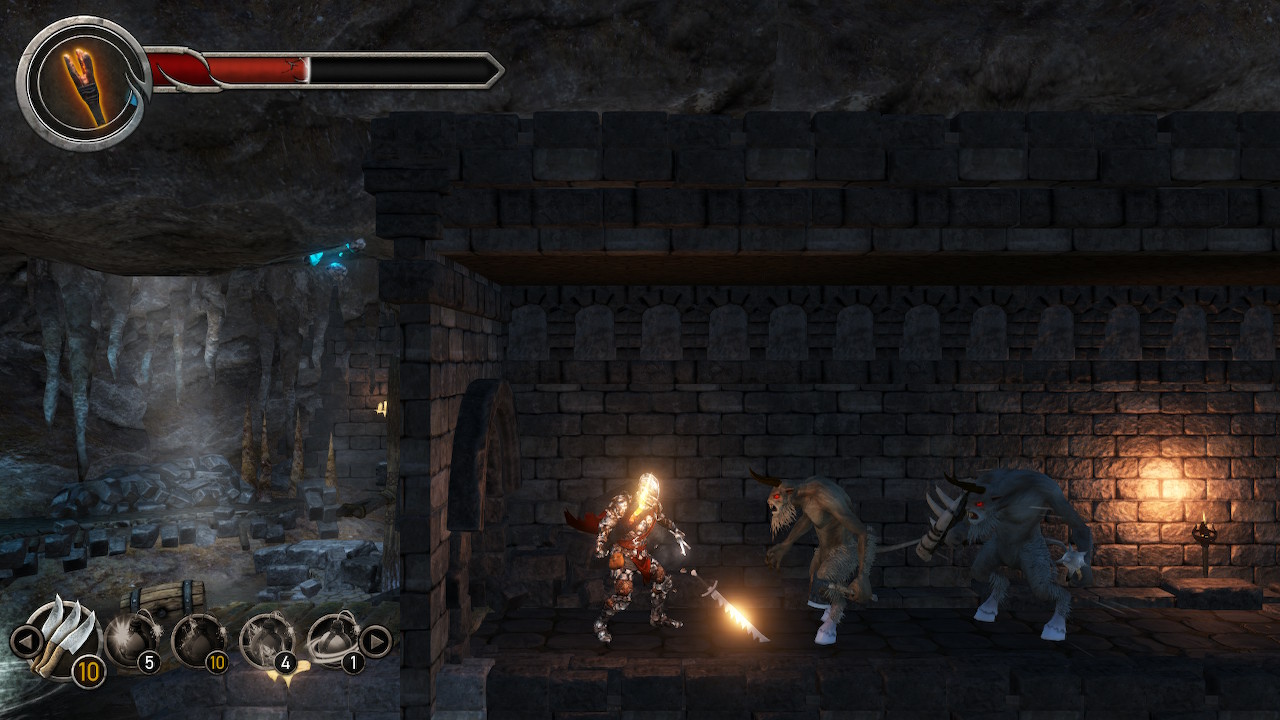 An evil sorcerer rules the village and makes the lives of the villagers miserable. He constantly demands people as sacrifices but when he chooses your true love, enough is enough. You are a knight who attempts to stop him, and in retaliation, the sorcerer turns the entire village to stone and takes her away. The power of her love is enough to bring you back, but not completely. This is the start of your journey to rescue her.

Castle of Heart works like the usual side-scrolling platformer, but has its own unique twist. Your health bar is actually an energy meter that slowly cracks and decreases. This is a result of you constantly resisting the curse that the sorcerer put on you. As time passes, you are slowly turning back to stone, and if your health runs out, you crumble into pieces and die. There are a few ways to prolong your life: collecting health orbs, filling up a secondary blue meter, and hitting checkpoints. Health orbs will either be out in the open, hidden inside breakable objects, or you get them from killing enemies. The blue meter is filled by collecting blue orbs, and once it fills up, you are completely healed and the bar empties. Checkpoints are bonfires that get lit and immediately heal you to full health.

It’d be too easy if you didn’t have to worry about enemies taking down your health, now wouldn’t it? In addition to the curse dwindling your health, there will be a myriad of enemies blocking your path. With your trusty sword, you’ll be slicing down crows, demonic creatures, soldiers, mages, and more. As you go through the levels, you’ll be able to pick up a secondary weapon to do more damage. If you want to do more damage close up, there’s swords, axes, maces, etc, or if you want some range, pick up a crossbow or some spears. Along with extra weapons, you’ll have access to throwing knives and bombs that you can pick up. If your health drops to a critical level though, one of your arms breaks off and you lose access to your secondary weapon and tools until your health rises above that mark again. This is extremely inconvenient and can be your end. Thankfully, as discussed previously, there are plenty of ways to heal and reduce the chances of this happening.

Now, the second danger comes in the form of platforming. There are plenty of gaps to jump, traps to avoid, ropes to swing on, and obstacles to get by. Like many platformers, one wrong move and it’s over. The placement of checkpoints is fair and never feels like they’re too far apart. It helps keep the player careful but allows them to take some risks as well. Holding down the jump button allows the player to make longer jumps, which is needed in some situations. Some other interesting sections come in the form of jumping up platforms to go straight up to avoid water, fighting to survive on a rising elevator, and riding down hills in a cart. These varying sections switch up the flow and keep things fun.

Throughout the levels, there are wooden walls and wooden spots on the floor that can be broken to reveal hidden areas. With just one hit, you can find a room containing a chest, health or energy orbs, weapons, or even collectables in the form of purple gems. There are five gems per level and the game keeps track as you collect them. Which ones you have are shown on the level select screen, so if you want to go back and gather what you missed, you are given a better idea of where to look. Extra areas are also hidden behind stone marked with a yellow X. To break these, you must either use a bomb or perform a special attack. The special attack was my preferred method, although it costs some of your health to use. It isn’t a large amount, so it’s well worth the cost.

There are a total of 20 levels in the game, which is broken up into four chapters. Each chapter contains five levels, having the fifth level culminate in a boss battle. The boss battles are a good challenge, and at times can be frustrating. Learning the boss’ patterns is important for success. In some cases, it will help make winning easier, while other times, it will be the only way for you to damage the boss. This means that it won’t be all about wailing on the enemy. For example, the first boss can beat you down with his staff if you try to stay in one place and swing your sword. At the same time, stay far away too long and he’ll just throw bombs at you until the distance is closed. He isn’t too tough, but he is a good introduction to how these fights can go. Each boss fights differently and I appreciate that aspect.

The levels themselves are well made and look great. In one level, you’ll be charging through a village, while in another you could be marching through the tundra. The world feels alive and being able to attack objects in order to make them fall on enemies is a nice touch. One of my favorites was knocking a lantern down and lighting enemies on fire. The music fits the world perfectly as well; it captures the medieval tone and makes you want to keep fighting your way forward. With that kind of inspiration, you’ll be saving your true love in no time.

Castle of Heart is a fun platformer with an interestingly challenging twist. The levels are well designed, but depending on skill, they may not take too long. The story is your run of the mill " slay the bad guy and save the girl" plot, but that meshes perfectly with a world of knights and monsters.

Codi loves to play video games and watch movies. He will watch almost any kind of movie just to experience them. His ideas take inspiration from the shows and movies he watches, and games he plays. He also loves a good pun.
Related Articles: Castle of Heart
Share
Tweet
Share
Submit