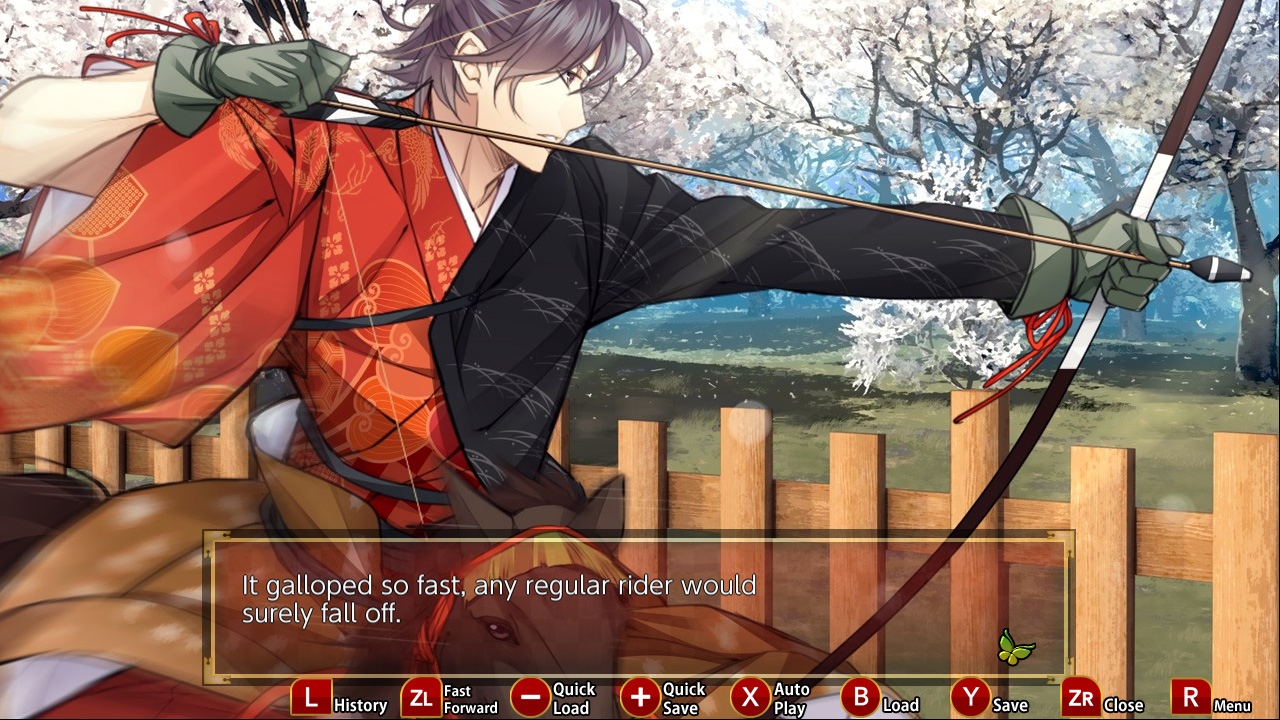 Ok, so let’s be honest right off the bat: Most people don’t dive into a dating game expecting brilliant literature. Character development, foreshadowing, plot twists, etc, generally take a back seat or directly lead to the idea of the leading lady banging it out her main man… or a ukulele playing tyrannosaurus rex, depending on your taste in dating games. The Men of Yoshiwara: Ohgiya provides exactly what it needs to: a handful of bachelors, a few conflicts, and, ultimately, a happy ever after, without excelling at any one thing. There is the occasional mildly surprising revelation in a few of the bachelors’ stories, and a couple of the romances are downright sweet enough to rot your teeth, but even with these few, scattered gems, the entire game feels a bit… empty.

The Men of Yoshiwara: Ohgiya is set in the same universe as the previous The Men of Yoshiwara: Kikuya game. Both take place on an island where men are never born (well, allegedly, but more on that later) and women must go to the pleasure district and hire a geisha if she hopes to conceive a child and carry on the family name. Much like in the previous game, your story inevitably leads to your chosen geisha falling so madly in love with you that they find a way to escape their life in the geisha house, abandon their numerous clients, and marry you. Of course, this is an inevitable outcome, since, as all the geisha constantly remind you, you’re special, and not like the other girls. Having played Kikuya is not a precursor to Ohgiya; the two games exist independently of each other. However, fans of Kikuya will find a familiar face lurking within one of Ohgiya’s story lines.

Ohgiya has slightly less content than Kikuya, with only five bachelors, and is also rather sparse on backgrounds. Don’t get me wrong, every bit of scenery is beautiful, there’s just not that many of them. There’s also the music issue. Once again, the music is nice, atmospheric, and does its job well… there just aren’t terribly many tracks, and they are all painfully short and do not loop seamlessly. I found myself cringing several times when the music fell silent, leaving me instinctive bracing for the rather jarring opening note of the main track to play.

For a game featuring five main bachelors and a whole cast of side characters, there are surprisingly few character portraits. I’m sure I’m sounding like a broken record at this point, but all the character art is quite lovely… there’s just not that much of it. Each of the date-able geishas has a set of portraits with different expressions, as well as one piece of special, full screen splash art which is custom to each character. The main character’s bodyguard, Musashi, also has a set of portraits and expressions, but while the main character has her portrait included in the trailer for the game, her images are never used outside of splash art. Numerous other side characters have no artwork at all; siblings, women who serve as romantic rivals, and even the main character’s mother, who features prominently in every story line, lacks any kind of portrait. This means that you’ll generally be staring at a background image and a text box whenever you’re not actively being rubbed up against by your geisha of choice. This lack of art leaves the game feeling rather empty, markets which are described as bustling and busy feeling vacant, and the entire thing rings a bit hollow.

The female protagonist in Ohgiya is a driven spirit who aspires to take over the family business, a nice departure from the weepy and rather useless protagonist of Kikuya, but the main focus still falls on the men. The Ohgiya geisha house is distinctly lacking in the demons you could court in Kikuya, and some of the geisha’s stories are, quite frankly, significantly more forgettable than others. I found myself pleasantly surprised by the story around sweet, flirtatious, and shockingly patient Asagiri, while the story around my first choice, Gakuto, was dry, forced, and turned out to be quite the letdown. Gakuto had all the elements of an exciting story about a man of mystery seeking revenge, but never quite managed to gel into something compelling.

Each character has twelve story chapters, and you’ll make two choices from a list of three options regarding an action or conversation each chapter. Your goal is to select the ‘best’ answer for that geisha and scenario, which increases your likability. There are lots of save slots, so you can replay chapters again and again until you find the magical combination — something you’ll likely be doing, as the correct answer isn’t always obvious. It’s not a matter of making the wrong choice, though I did that, too. Some of these issues may simply be culture differences–when Gakuto was forcefully kissing the lead character, I thought, “No problem, homie likes it rough,” and selected the option to bite his lip. Turns out that was the single least likeable action I could have taken. But not all are even that obvious; at one point I was tasked to pick the best response from the options of “Hesitate” “…” and “Look away.”

The romance scenes themselves range from pretty steamy to a bit forced and lackluster. While there may be some rather seductive buildup scenes, The Men of Yoshiwara: Ohgiya can be surprisingly chaste at the most provocative points. You know what’s going on, but there’s nothing explicit in the entire game. If you want tension and buildup, this should do the trick, but if you want anything more, you may want to stick to the classic Harlequin Romance novels.

Once you’ve completed the main story for any given geisha, you’ll unlock a prologue as well an additional date. It’s also worth noting that The Men of Yoshiwara: Ohgiya does suffer from a few translation hiccups here and there, but that they are rather rare, and tend to be amusing rather than confusing. While the game’s very lore states that “No men are born on this island,” men seem to be everywhere. One of the male geishas was born on the island, there’s a younger brother who has been born on the island, there are policemen, male candy makers, salesmen… all sorts of men who inhabit this supposedly male-free island. Again, I’m not looking for great literature here, but there seem to be men everywhere, yet I can only select from a batch of five glorified whores? I’m confused.

Musashi is hot, thoughtful, and already knows what I like… why can’t I bed him?

And then there’s Musashi. Musashi, the loyal family bodyguard. Musashi, who reminds the main character to eat, who covers for her with her mother, who brings her candy when she’s down, who warns her to guard her heart, as geisha make a habit of toying with the hearts of their clients. Musashi, who clearly has feelings for the lead, who comes so close to confessing a number of times. Musashi, who you can’t date. It’s perhaps my biggest complaint about the entire game; the lead character defies tradition in almost every story line in order to snag her man, but she just can’t seem to kick the geisha tradition entirely and go for the man who already knows her, her family, and her business inside out. We can only dream of the day when we’ll receive a Musashi DLC.

The Men of Yoshiwara: Ohgiya

The Men of Yoshiwara: Ohgiya is a pretty little romance game which does everything adequately, but not exceptionally. It's a little light on content, some of the bachelor's stories aren't terribly interesting or engaging, and it would really benefit from some additional background and character art, but benefits from beautiful splash art and a stronger female protagonist than the last Yoshiwara title.

Best known online as damphyr, Kay Purcell is a purple haired popular culture expert and San Diego Comic-Con panelist who spent fifteen years as as a Senior Community Manager and Brand Writer for DeviantArt. An avid shiny Pokemon hunter, she has a habit of nerding out over video games, cats, VR, and geek culture.
Related Articles: The Men of Yoshiwara: Ohgiya
Share
Tweet
Share
Submit

Fly me to the moon, let me survive among those stars…please – Deliver us the Moon review

Have you ever wondered what will happen in the future when we run out of fossil fuels and other earthly energy options...

To the Moon! Or just the bus station — Borderlands Legendary Collection Review

The first three games of the Borderlands series have arrived on Switch in the form of the Legendary Collection. The bundle includes...