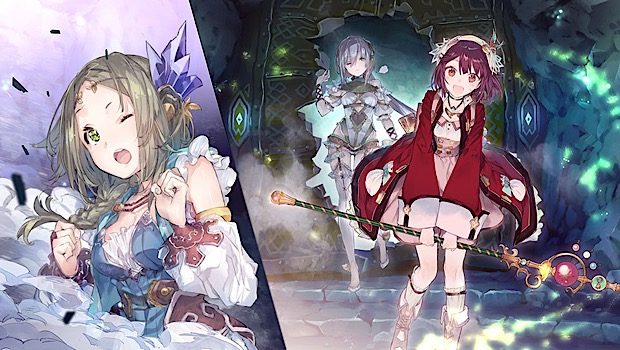 Gust, the developers of the Atelier series, seem to approach each game with the same philosophy that goes into their trademark alchemy process found in each game. Taking the ingredients of a fun JRPG and tinkering with them in subtle ways, Atelier games come out similar, but always slightly improved over their predecessors.

Atelier Firis: Alchemist of the Mysterious Journey is their most ambitious entry to date. Stripping away the stage-like exploration mechanic in favor of an open world unleashes this series from a procedural bevy of areas into real exploration and discovery.
Like other titles in the series, Atelier Firis is a coming of age story. A young and naive Firis spends her days locating ore through some special sense she has for it. She never has left her mountain mining village and yearns for the outside. A visit from Sophie, the titular character from the previous game, unleashes Firis’ innate alchemical abilities and starts her on her journey.

I found that the story fit well with the developments in gameplay, where Firis feels confined by the set parameters of her life and yearns for open spaces. I’ve felt that way with every Atelier game I’ve ever played, and the new open exploration is exciting and new, just as the world is to our heroine.
On this open world map, you have two primary functions. Monsters are scattered about for you to battle, and materials are also spread across the land for collection. Unlike other Atelier games where 99% of quests are found in town, this game has several NPC characters spread about who make requests of you. As you explore, a timer counts down the days, and at the end you must return to the town and fulfill duties at home.

The battles are turn based with a meter on the right side of the screen showing the order of attackers. Different attacks have different effects on your order, meaning use of an item will typically allow you to take another action quicker than a special attack. The game allows strategic defensive and offensive combos, but rather than triggering a special set attack, the game allows you to select what each character does in the combo strike. This can yield interesting and unique attacks based on your own strategy.
The collection part of the game is the same as ever, but the visual output is upped from a simple spark of light on the map to a visual representation of the item you are retrieving. Also, there are items like rocks and fishing holes that require a little work or extra items to plunder. Each zone has its own contents, meaning you’ll have to get more accustomed to where you can locate each type of item. This is intensified due to the open world.

The materials you collect are used in alchemy to create the items you use in battle, on the map, or in other various ways. Alchemy is performed to complete tasks as well. Each material has a quality grade, size, component number, and shape, which you have to place on a grid with minimal to no overlaps. The higher numbers and lower amount of overlap you achieve determines the quality of the item you are making.
The alchemy functions are complicated and deep, but never feel overwhelming. You’ll find yourself spending lots of time, happily, coming up with new patterns and material combos for each item you create.
I have very few complaints, but the game does suffer from slow movement, which is painful when traversing long stretches of land back and forth. Another issue is with the static townspeople and NPCs, who could easily be doing something active to make the game a bit more immersive.

The presentation of the game is strong as well, with easy to navigate menus and plenty of shortcuts. The graphics are anime-chic, and definitely won’t wow you, but don’t let you down either. Perhaps most enjoyable is the music, and again this game allows you to use music from other titles in the Atelier family in place of the defaults.

Atelier Firis: The Alchemist and the Mysterious Journey

Atelier Firis: Alchemist of the Mysterious Journey is the first open-world Atelier game and it takes the fun battles and item creation modes from the previous titles and makes improvements and additions that make this the most impressive game in the series. Fans of the series will find this a triumph, and even those unacquainted will be impressed with this fun, strategic, and light-hearted adventure.

Patrick Rost has been with Gaming Trend since 2013. At first focused on sports coverage, Patrick has gone on to cover a wide range of games and other products for the website. Outside of Gaming Trend, Patrick writes and records music, grinds perpetually in Elder Scrolls Online (PS4), and lives day to day with his two dogs, Bob and Stella.
Related Articles: Atelier Firis: The Alchemist and the Mysterious Journey
Share
Tweet
Share
Submit