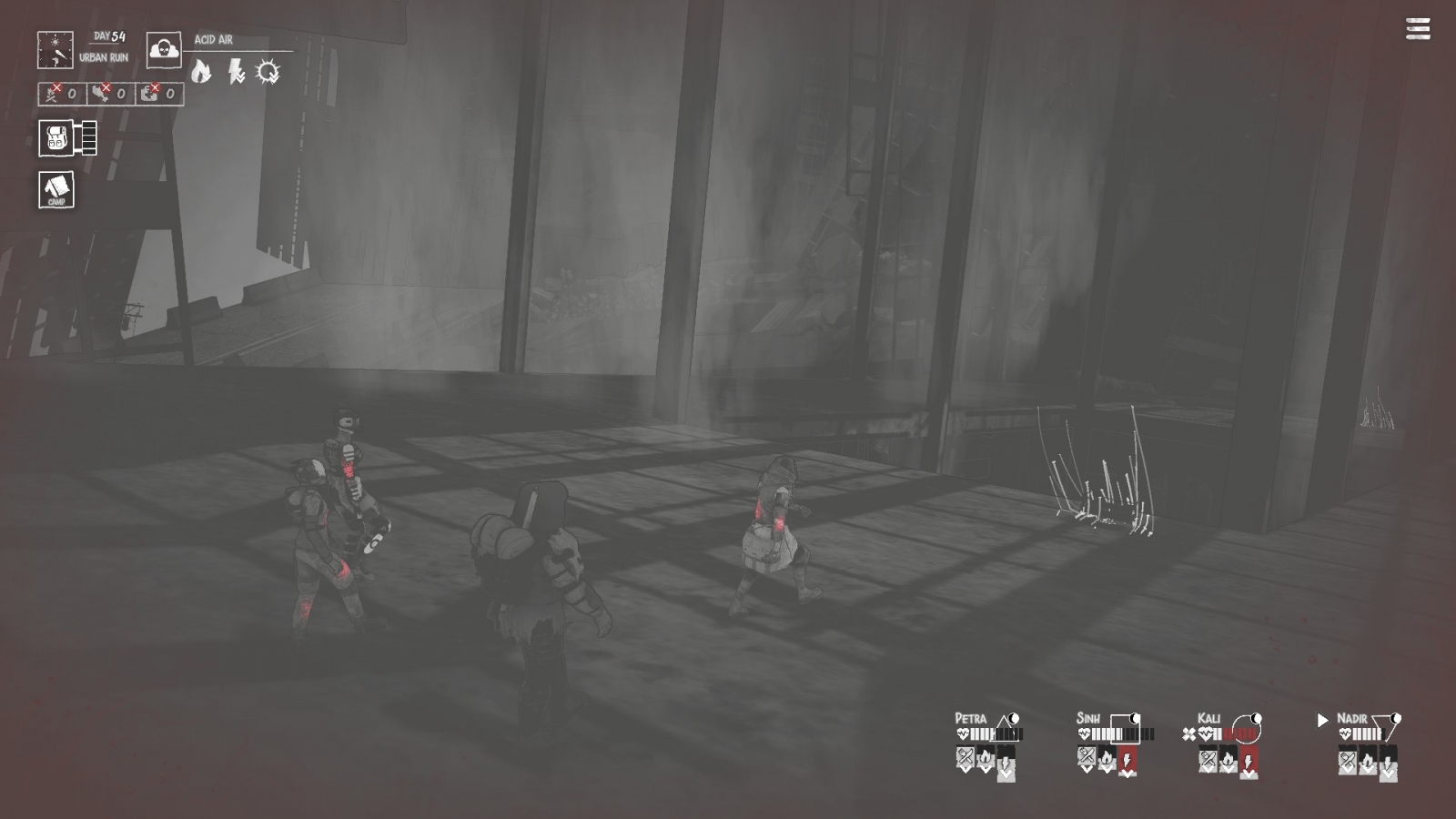 The idea of the Earth becoming uninhabitable due to climate change, environmental disasters, and any number of other things is a terrifying one. However, due to the current political state of the world it doesn’t look like anything is going to be done about that anytime soon, so with that in mind Ashwalkers is at the very least worth talking about. Ashwalkers, a self described Survival Journey, follows the four members of Squad Three (Petra, Sinh, Kali, and Nadir) as they journey to find a new home for their doomed community: The Dome of Domes. The world outside the Domes is largely uninhabitable, with climates either being scorchingly hot or deathly cold. Before the 250,000 members of their community can make an exodus, Squad Three needs to confirm a safe route and see if they can actually get into the fabled Dome of Domes, if it even exists.

As you slowly walk through each area, you have to manage each of the four characters’ hunger, warmth, energy, hope, and health. Most of those stats are fairly standard for survival games, with the exception of hope, which essentially represents how motivated a character is and if they’re unmotivated they have less of a chance of doing a task well or succeeding. These stats constantly drain as you walk, search for resources, and resolve encounters. By setting up camp, you can replenish those stats by using said resources and/or having characters rest, talk, explore, or guard the campers from any surprises. While you can warm up and fill stomachs simply by starting a fire with combustibles or eating food you found, energy (which is needed to even pick up resources in the field) can only be restored by resting and hope increases by having at least two characters talk to each other. You need to carefully manage meters, resources, and crucially time to finally reach the Dome of Domes because if three out of four of the Squad dies it’s game over. 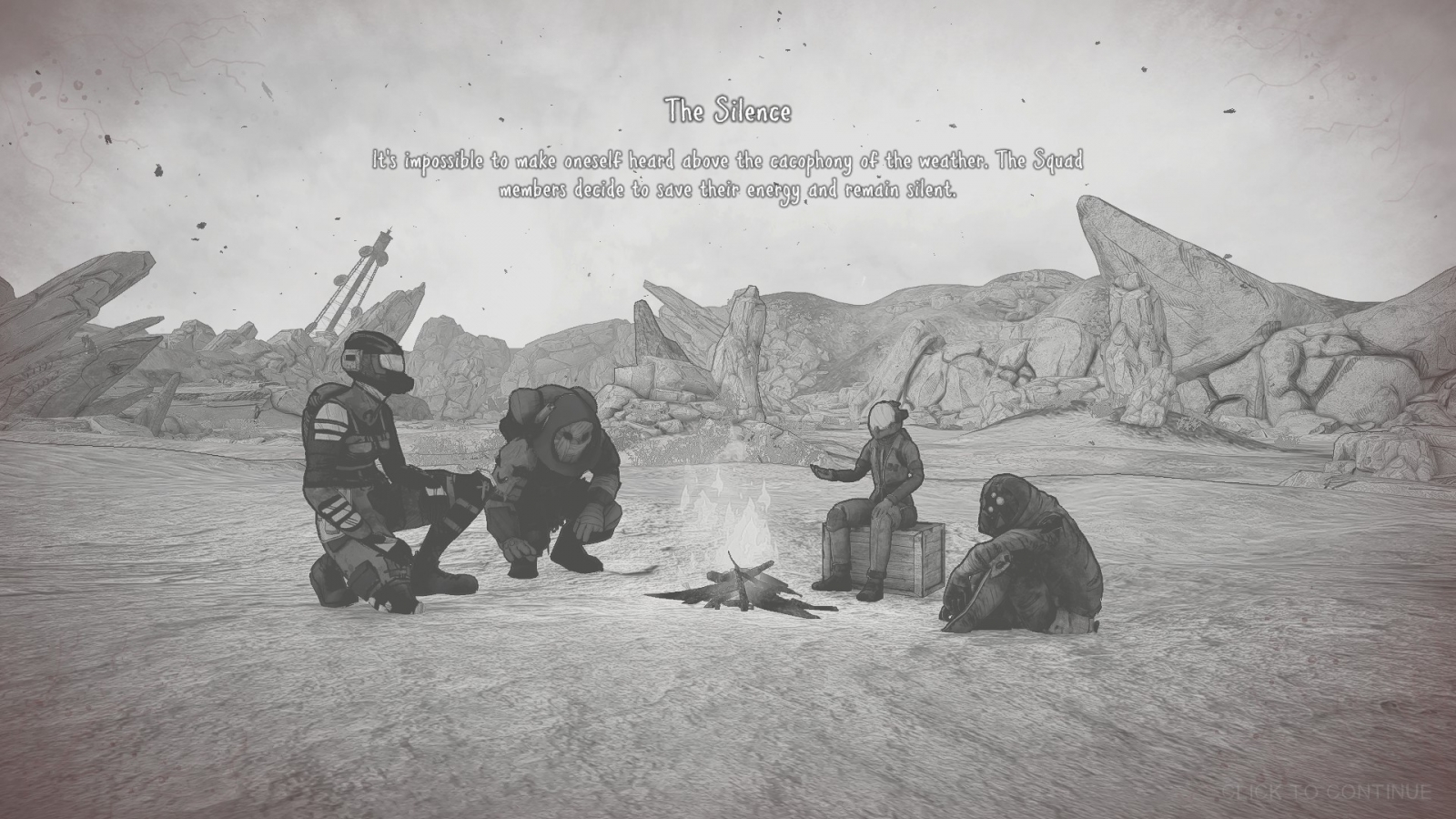 Despite all of these factors to keep track of, I found Ashwalkers to be surprisingly forgiving, as long as you don’t do anything monumentally stupid you’ll most likely reach your destination. There are quite a few stupid things to do though, as you encounter events constantly. These encounters present you with a situation, such as choosing to rappel down into a canyon or take a detour through ruins and whether or not to save a potentially dangerous Savage’s (the game’s word, not mine) life. The Squad members will each have their own solution based on their personality and specialties, like avoiding conflict or choosing to trust people. The game has 34 endings to discover with these choices along with six biomes (you’ll only encounter 4 in a single playthrough) to encourage different play styles in each run.

This is where we run into, in my opinion, the game’s biggest issue: time. The game is very, very slow. Characters walk at a glacial pace, the narration unfolds slowly and you can only skip its animations sometimes, and it generally takes a long time to do just about anything. Each run takes about two hours when it feels like it should really take thirty minutes to an hour. Most of your time is spent clicking one a point in the distance and waiting for the characters to get there, occasionally picking up resources or stopping to use some as you go. The interesting part here isn’t watching meters go up and down, it’s making choices then dealing with those consequences, but you mostly do the former. Playing Ashwalkers, I’m reminded of The Yawhg, another game about surviving a disaster, and the best parts of Ashwalkers are very reminiscent of that game, like choosing whether the life of your crew is just as valuable as the life of a stranger, but actually interesting and impactful choices like that come around once or twice per playthrough. It’s certainly an interesting game, but the time investment makes me hesitant to jump back in. 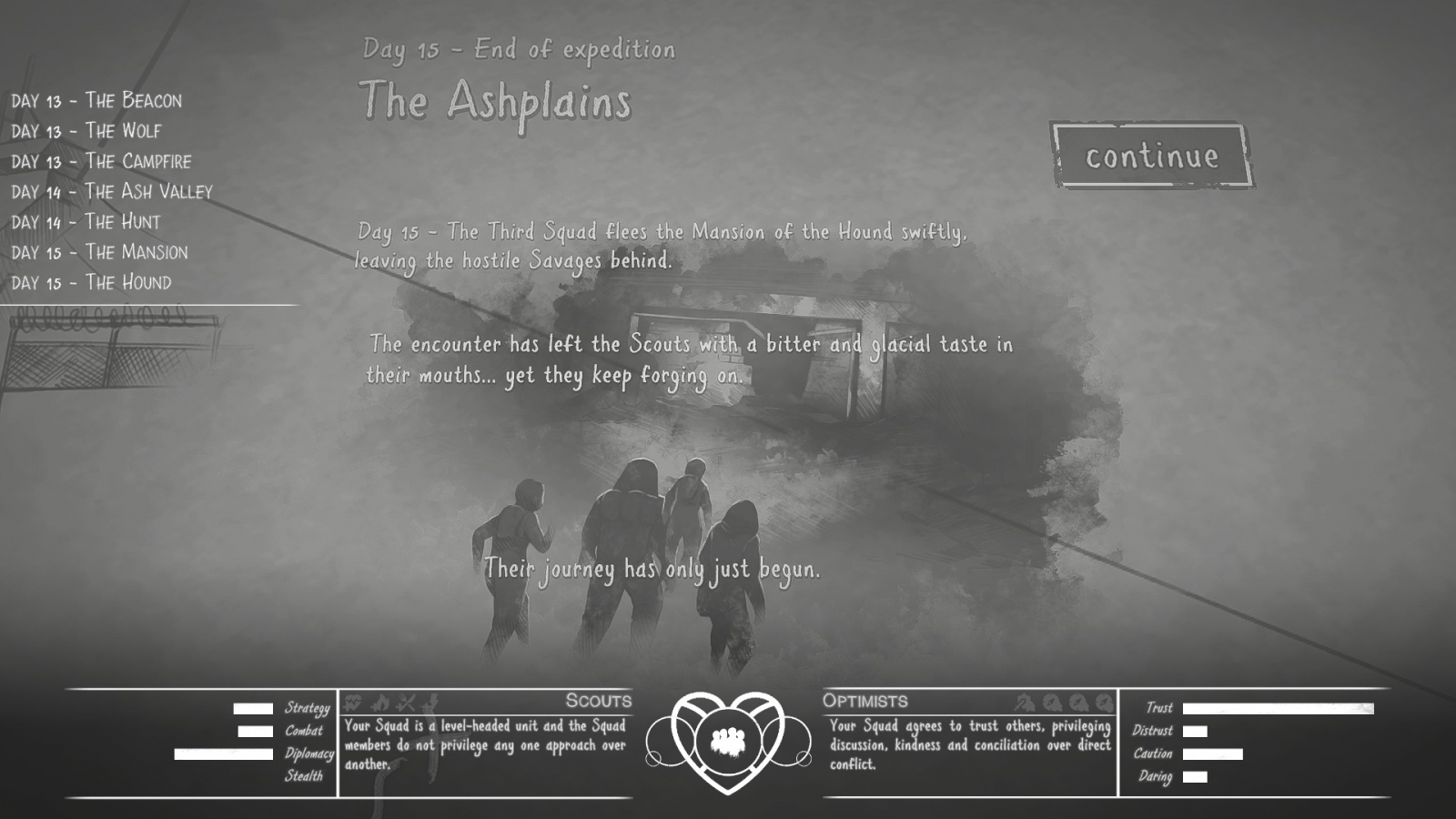 Ashwalkers also feels decidedly linear for a game with 34 endings. In my playthroughs, I encountered three out of four of the same areas each time and the exact same events along with them. The game relies a lot less on actual randomness and more on making different choices, which why bother if I already know which choice leads to the best outcome and which will simply injure my party. Sure, I want to see different endings, but I also don’t want to get my Squad killed in the process. I think some more random events could have really helped replayability, such as simply making some choices unavailable for reasons other than a lack of resources (because those choices are usually the best option). This leaves Ashwalkers in a bit of a pickle: It wants you to replay it dozens of times, but doesn’t give you much to see and do on repeat playthroughs.

While Ashwalkers has an interesting art style and atmosphere, it does little to capitalize on its survival mechanics, choice based narrative, and is far too easy for what it wants to be. While Ashwalkers may be worth a single playthrough, there’s not much to motivate repeat visits to this wasteland.

David is the kind of person to wear his heart on his sleeve. He can find positives in anything, like this is a person who loved Star Fox Zero to death. You’ll see him playing all kinds of games: AAAs, Indies, game jam games, games of all genres, and writing about them! Here. On this website. When not writing or playing games, you can find David making music, games, or enjoying a good book. David’s favorite games include NieR: Automata, Mother 3, and Gravity Rush.
Related Articles: Ashwalkers, Indies
Share
Tweet
Share
Submit