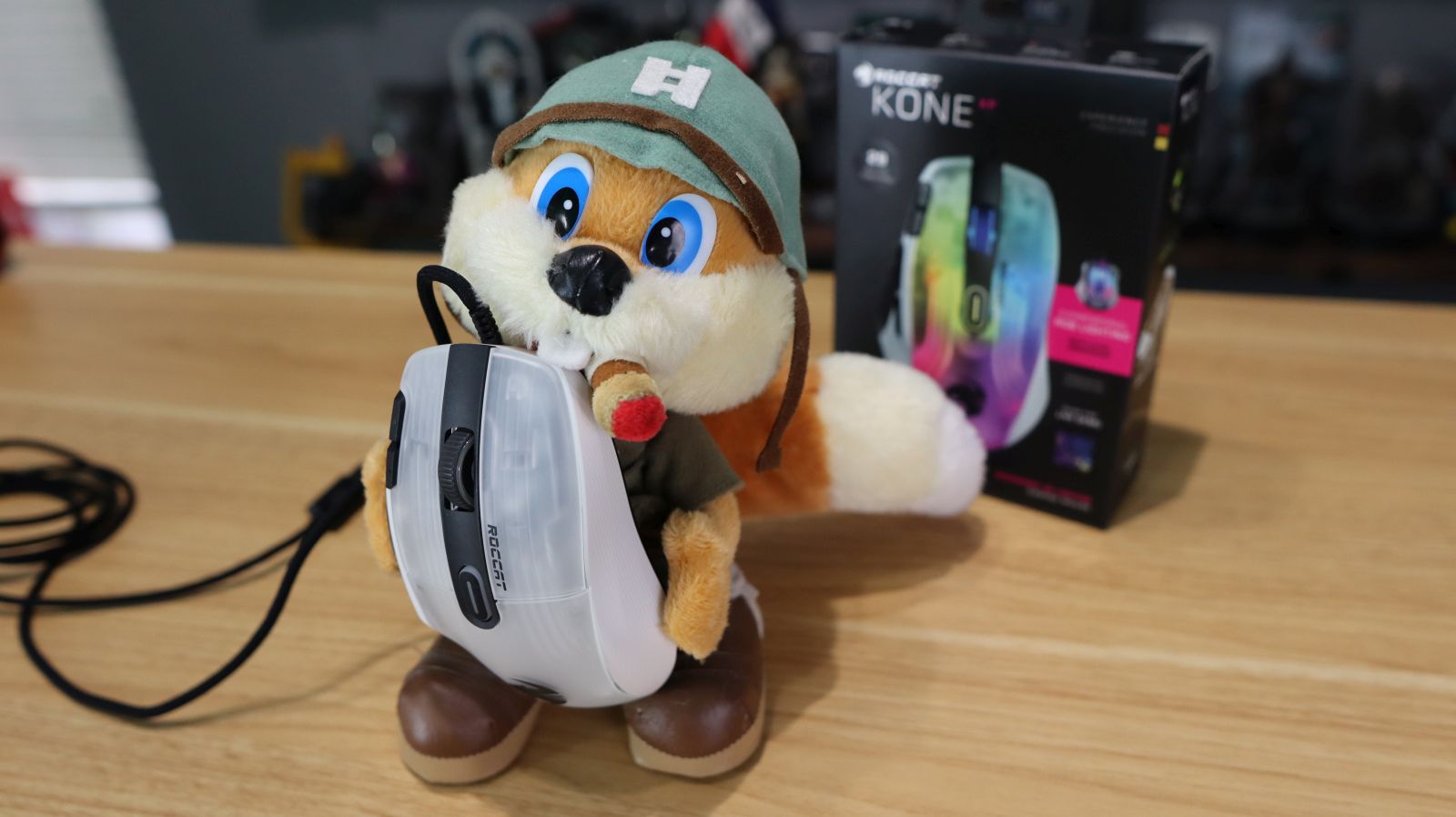 ROCCAT’s mice are often purpose-driven affairs. Lightweight mice, devices with extra keys for MMOs, wireless, and mice with shockingly-high DPI are just a few of the options on offer. Now, the hardware veterans at Roccat are back with an update to their Kone series. The Kone XP is a corded mouse that, at first glance, looks like it focuses hard on RGB. I’m the guy that typically rips anything that flashes or emanates light right out of my case, so this peripheral might not be for me. Wincing as I plugged in this extraordinarily bright mouse, I braced myself for a rough review. It’s fun to be wrong every once in a while… 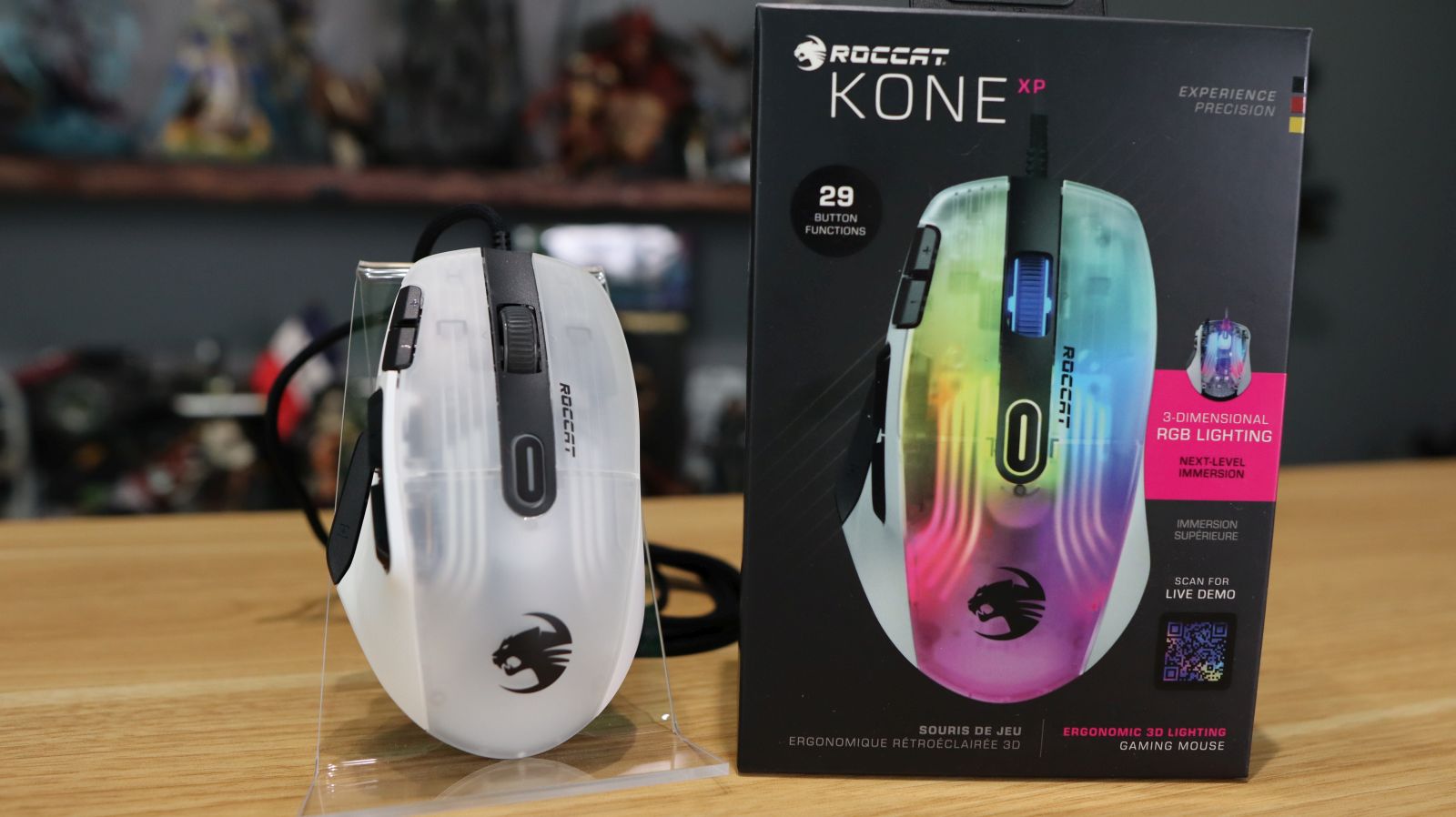 Unboxing the mouse I immediately noticed that the entirety of the body is a frosted translucent surface, with solid white sides. As always, the cord is a braided cloth, though this appears to be an update as it’s fairly soft and supple, replacing the stiff braided cord of its predecessors. At just shy of 6 feet, it feels long enough for just about any setup. Flipping it over to peel off the covers on top of the PTFE (Polytetrafluoroethylene, a synthetic fluoropolymer of tetrafluoroethylene present in Teflon, if you’d like to twist your tongue in a knot) glides, I also spotted that these little feet have received an update. Frankly, they are impossibly slick. I’m not sure what chemical magic has occurred here, but we reap the benefits. Also included in the box are a replacement set, should you need them.

You might recall in my review of the Kone Pro Air that I was not a fan of the removal of the hardware DPI toggle. Team Roccat heard me loud and clear, and the Kone XP sees the return of not only a physical DPI up and down, but also a physical profile switch, and many more. In fact, there are 15 functions available on the Kone XP, and I’m absolutely here for it. Using the Swarm software once again you’ll be able to remap all 15 of them, but holding down the Easy Shift button (more on that in a few) while using any of them gives them a secondary function, doubling the number of mappable options. It effectively makes it an excellent MMO mouse without much effort, but also without effectively strapping half a keyboard to the side. Well done to the Roccat engineering team on this one – you nailed it. 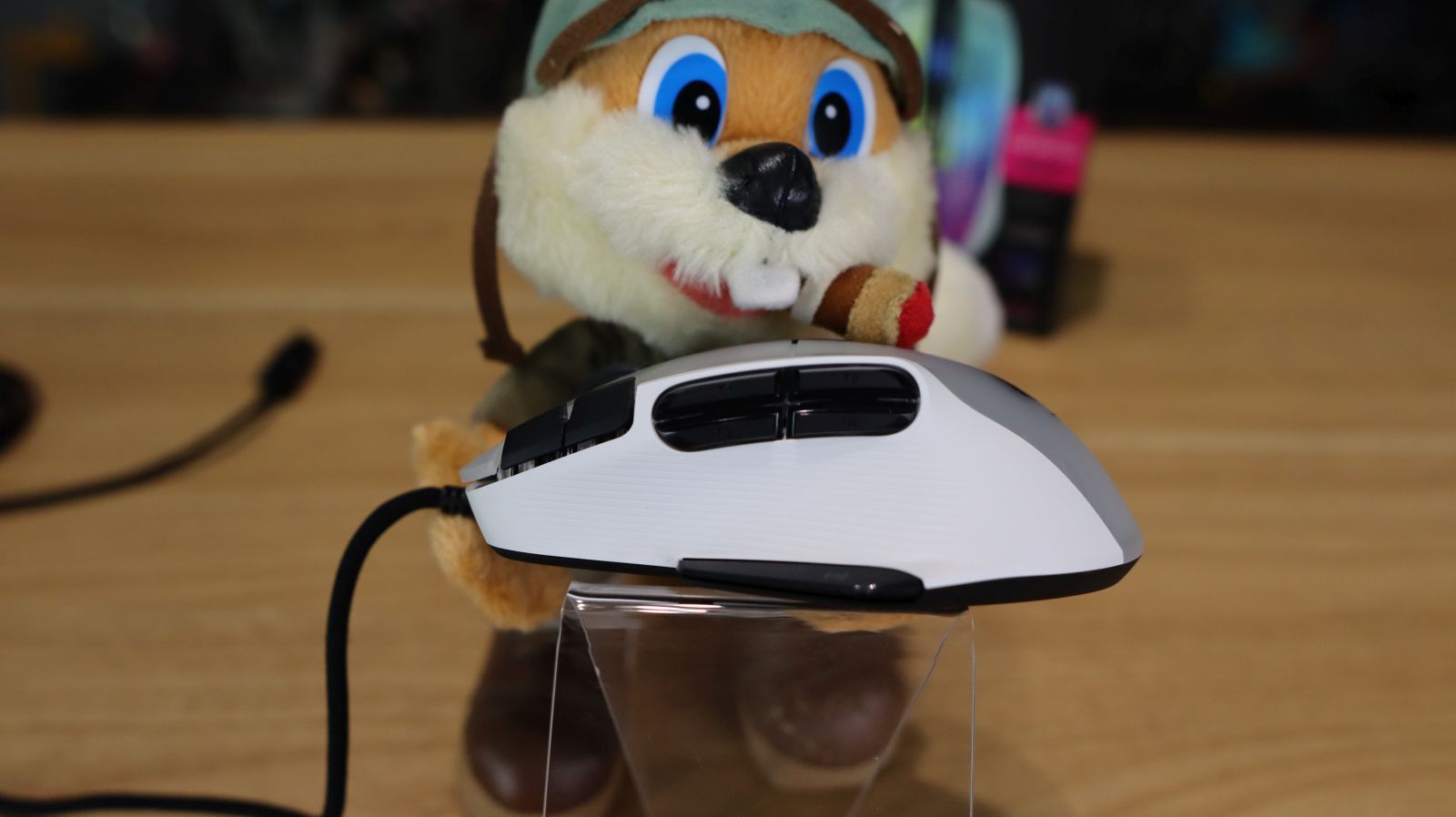 Underneath these buttons is Roccat’s proprietary Titan switch. These optical switches have a purported 100 million click lifecycle (I did not, in fact, click 100 million times to test this theory). A variant of the same red and brown switches used in their keyboards, these switches are short throw and very responsive. Inside the switch, the button recognizes actuation by blocking a beam of light to communicate that a click has occurred. Roccat suggests that this occurs with “virtually zero delay”. I don’t have any way to measure it, but based on a few weeks of use, I believe it.

Roccat didn’t feel the need to fix something that wasn’t broken, so the Kone XP uses the same “Owl Eye” sensor present in the Kone Pro Air. As such, I’ll once again point out that owls are farsighted and can’t focus on objects that are close – precisely how these sensors work, but I digress. Throwing a huge variety of games at the Kone XP, as well as video and photo editing, the sensor delivers perfect precision. With simple adjustments to the DPI, I was able to tackle FPS, RTS, DaVinci Resolve, and Affinity Designer without a problem.

In terms of new features, we need to talk about buttons. I’ve already mentioned the two DPI adjustment buttons which are tucked out of the way at the top left corner of the left mouse button. Joining those is a beefy profile swap button dead center in the body, allowing you to quickly switch between five stored profiles. On the left side of the Kone XP you’ll also find four thumb buttons (replacing the two chunky buttons that the Kone Pro Air had) that I ended up using far more than I anticipated. Below that, however, lies a surprise. 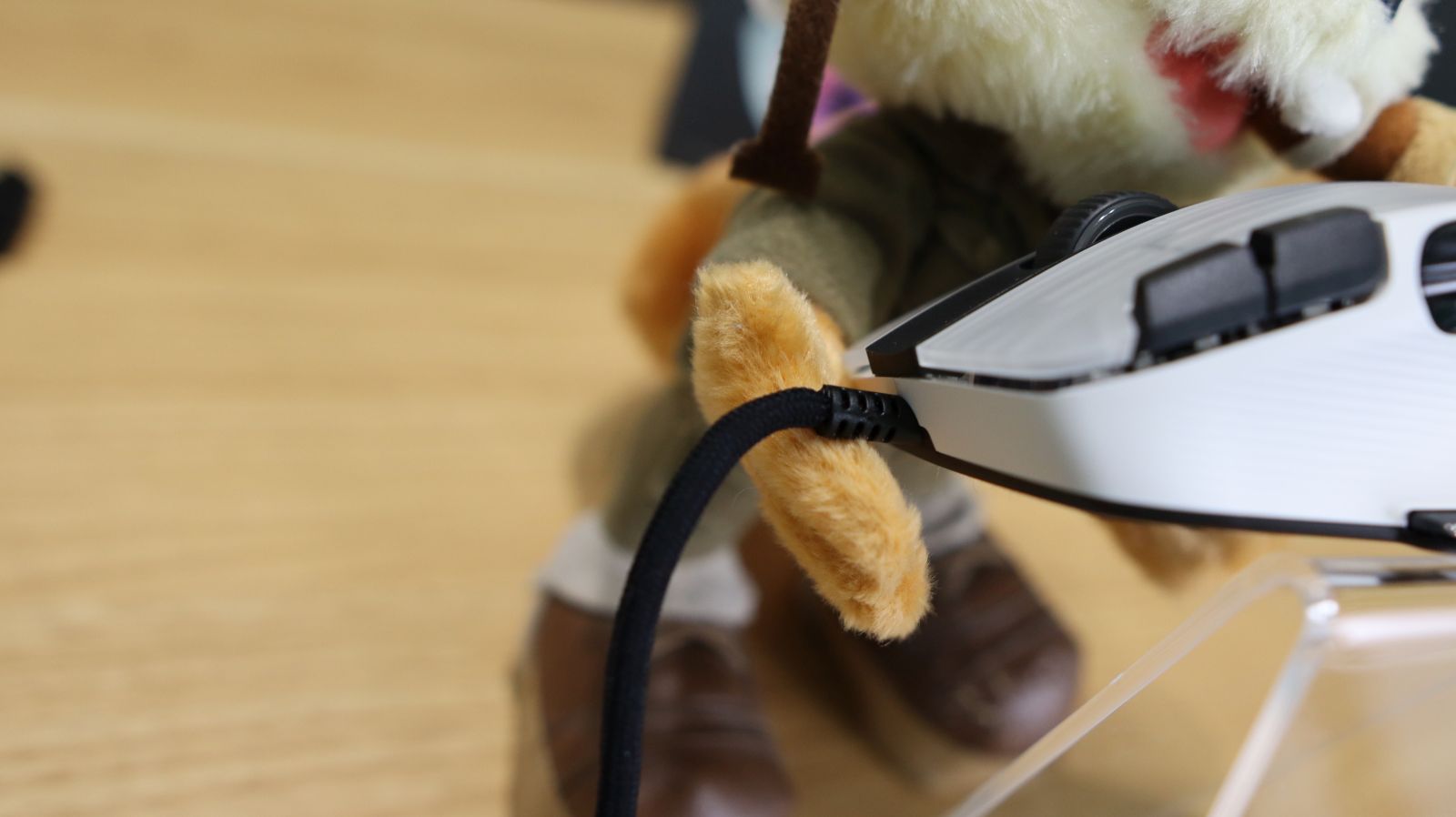 The Kone XP is molded to be a right handed mouse as 90% of the world’s population are right handed – makes sense. The small thumb rest shelf is comfortable when mousing, but also has a black edge on it. I thought it was merely aesthetic, but it’s actually the Easy Shift button. It effectively doubles the macro buttons, but since it can be remapped, I found other uses for it as I don’t need 29 different functions most of the time. Instead, I used it as a quick way to copy whatever I had highlighted, which was useful for video and photo editing. Clicking my profile button to switch, I had another profile set to have this button instead switch to my next track in Spotify. The choice is yours, but it’s cool to have this button at the ready to do whatever I can dream up. Your use case may vary, but the flexibility is here to handle it.

I have to admit that I had to swap out my Kone Air Pro last year. It developed a hardware issue where the scroll wheel would jerk, causing it to reverse directions. That’s frustrating when scrolling through a document or web page. Thankfully it was infrequent, but happened enough for me to need to swap it out. The Kone XP gets a huge update to the scroll wheel, and not just the actual scrolling bits. Covered with a rubberized surface, you can really feel the detents as you scroll. It’s very precise, and the Roccat team has confirmed that it solves the hardware problem of its predecessor. Better still, this is a 4D scroll wheel. No, it cannot transcend time and space, but instead scrolls left and right, providing a lateral scroll without having to pop down to the scroll bar when needed. In gameplay, it maps perfectly to leaning functions in games like Rainbow 6 Siege, Escape from Tarkov, and Dishonored 2. 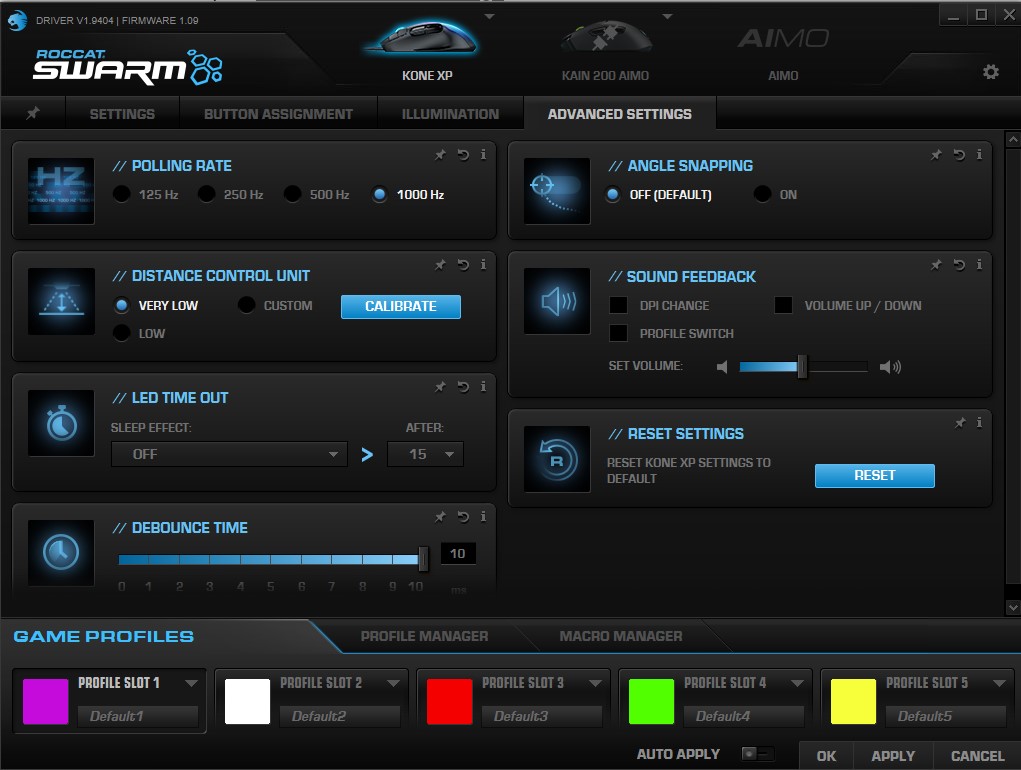 Do you like LEDs? If you are shouting yes at your screen, well…you are a weirdo, but the Kone XP has you covered! With a whopping 22 LEDs stuffed inside the body of this little beast, the Kone XP is damned bright. Jumping back into Swarm, you’ll find six choices for effects for this lighting, including tying it to AIMO, Roccat’s system to tie all of their peripherals together. Since I have a mouse pad and keyboard from Roccat, I got to see AIMO in action. Setting the whole shebang to “Wave” mode, it actually looks pretty cool. You can also update your firmware in the Swarm software, as well as adjust the DPI profile to an excessive degree, in addition to the vertical scroll speed, horizontal tilt speed, how fast double click works, the windows pointer speed, and much more. The team has exposed just about every meaningful adjustment possible — you can even enable mouse tails, if you need to take a quick trip to the early 2000s. Whatever makes you happy, folks! 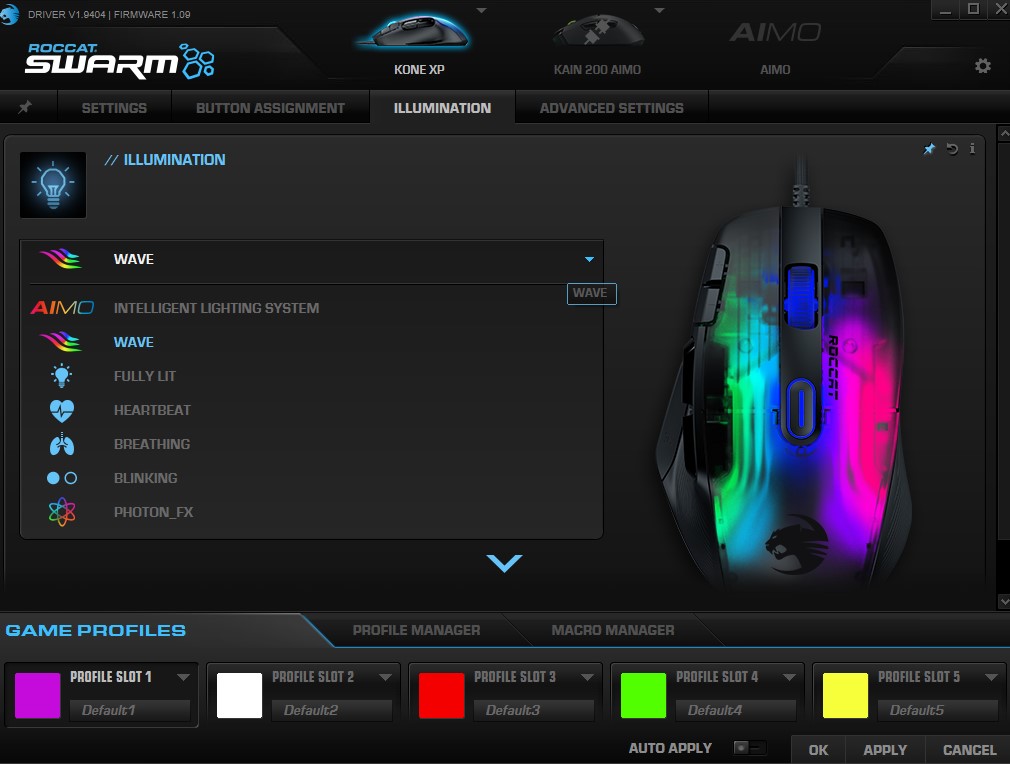 There is a Macro manager baked into the Swarm software, but it was wildly out of date last year, and just looks more out of date as the years march on as no additional titles have been added since our last look. You are welcome to build your own macros, and frankly that seems to be the only way you’ll get what you want – this is a forgotten corner of the Swarm software.
Speaking of software, NVIDIA has released a solution called NVIDIA Reflex that aims (Ha! Enjoy that pun.) to reduce the aim latency of input devices by bypassing the render queue between the CPU and GPU. It does so by ensuring that no frames are stuck in that render queue, which would cause input lag. By reducing the overall time between when you click and when that click becomes action, you’ll be more effective in first person shooters. It won’t fix your aim, but it should take “this game lags!’ out of the equation. The Roccat Kone XP supports the Reflex technology right out of the box – another update from where we were with the Kone Pro Air, and also putting this Kone XP in a short list of hardware that does so. 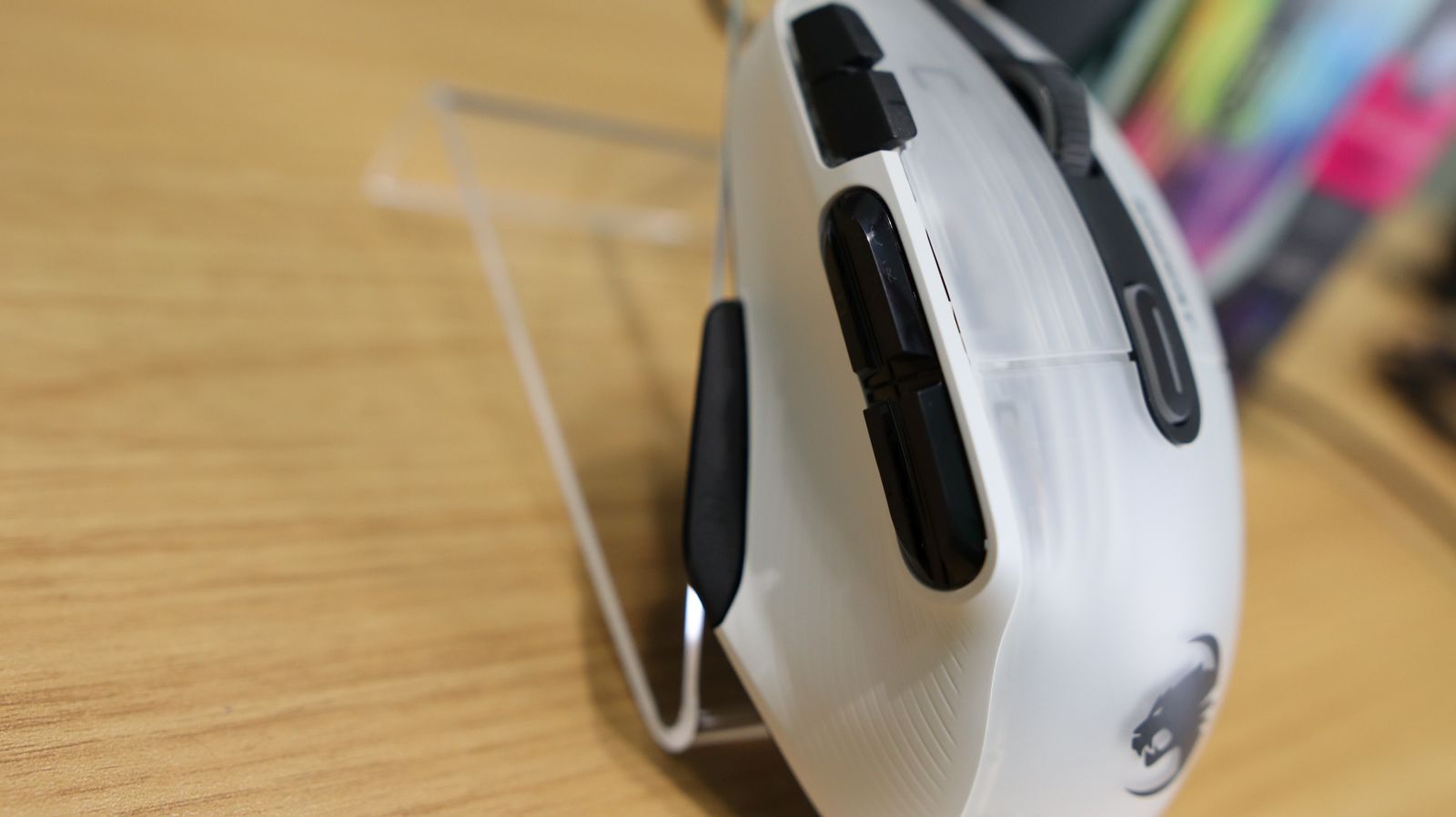 There’s one last big update that puts a smile on my face. I raised an eyebrow at the $129 price tag on the Roccat Kone Pro Air, though the goods outweighed the bads on that one. Thankfully, the team squeezed the Kone XP, and despite having a TON of new features and updates, the price is just $89.99. That’s an insanely good value for this mouse. The features put it in a class of peripherals at more than double that price, making this easily the best value for your money. I’m frankly stunned to see this mouse come in at less than $100.

When buying hardware I spend a great deal of mental bandwidth on warranties. I’m glad to report that the Roccat Kone XP sports a 2 year warranty. Having experienced that warranty support myself with this mouse’s predecessor I can say that it’s excellent. The team is incredibly friendly and eager to make things right. Since I never mentioned that I was press, and I used a personal email address, I had the same experience that you’ll hopefully have, should you need it. It’s one thing to offer an extended warranty, it’s another thing to have that warranty be a positive experience. Roccat seems to actually care.

Where to start? Everything about the Roccat Kone XP is a massive upgrade over any Roccat mouse I’ve ever used. It’s punching far above its weight, and it does so at a price point that is absolutely phenomenal. This is what peak performance looks like.

Ron Burke is the Editor in Chief for Gaming Trend. Currently living in Fort Worth, Texas, Ron is an old-school gamer who enjoys CRPGs, action/adventure, platformers, music games, and has recently gotten into tabletop gaming. Ron is also a fourth degree black belt, with a Master's rank in Matsumura Seito Shōrin-ryū, Moo Duk Kwan Tang Soo Do, Universal Tang Soo Do Alliance, and International Tang Soo Do Federation. He also holds ranks in several other styles in his search to be a well-rounded fighter. Ron has been married to Gaming Trend Editor, Laura Burke, for 21 years. They have three dogs - Pazuzu (Irish Terrier), Atë, and Calliope (both Australian Kelpie/Pit Bull mixes).
Related Articles: Roccat Kone XP mouse
Share
Tweet
Share
Submit