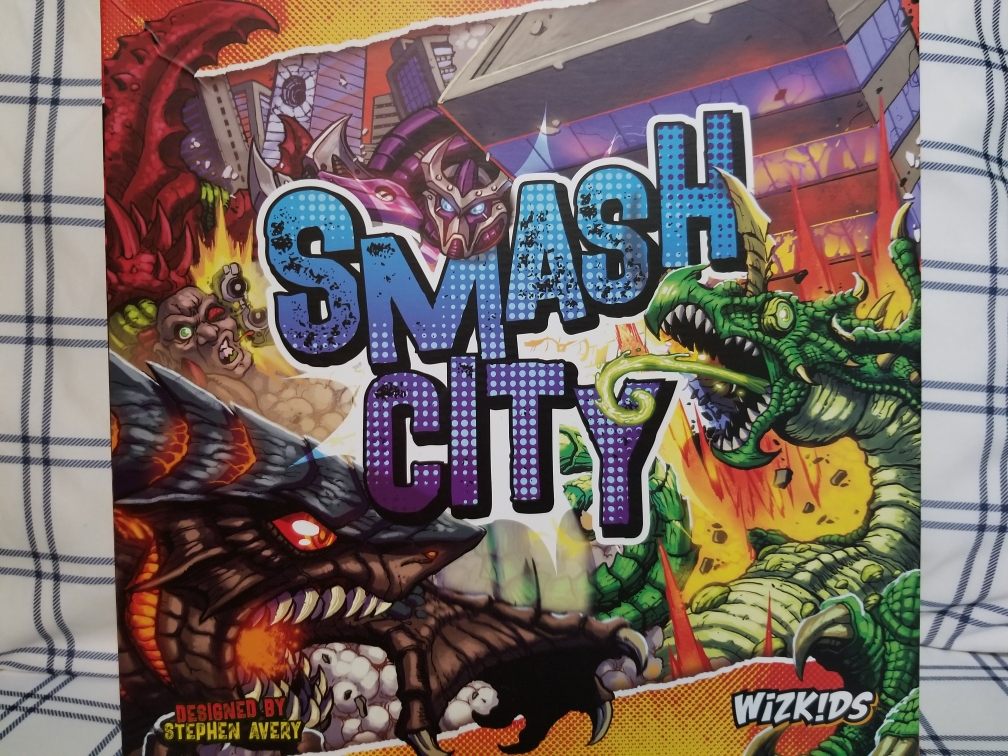 Monsters have always been fascinating, whether they be werewolves, vampires, demonic creatures, or any of the other plethora of creatures that we’ve imagined. Typically, the bigger and more destructive they are, the more incredible they are. One such example is the kaiju, and for those who don’t know what a kaiju is, it’s a massive monster such as Godzilla, Mothra, or King Kong. With how fantastical these monstrous creatures are, why wouldn’t you want to be one in a tabletop setting? In Smash City, you get to take the role of one of four kaiju as you fight to be the last kaiju standing. 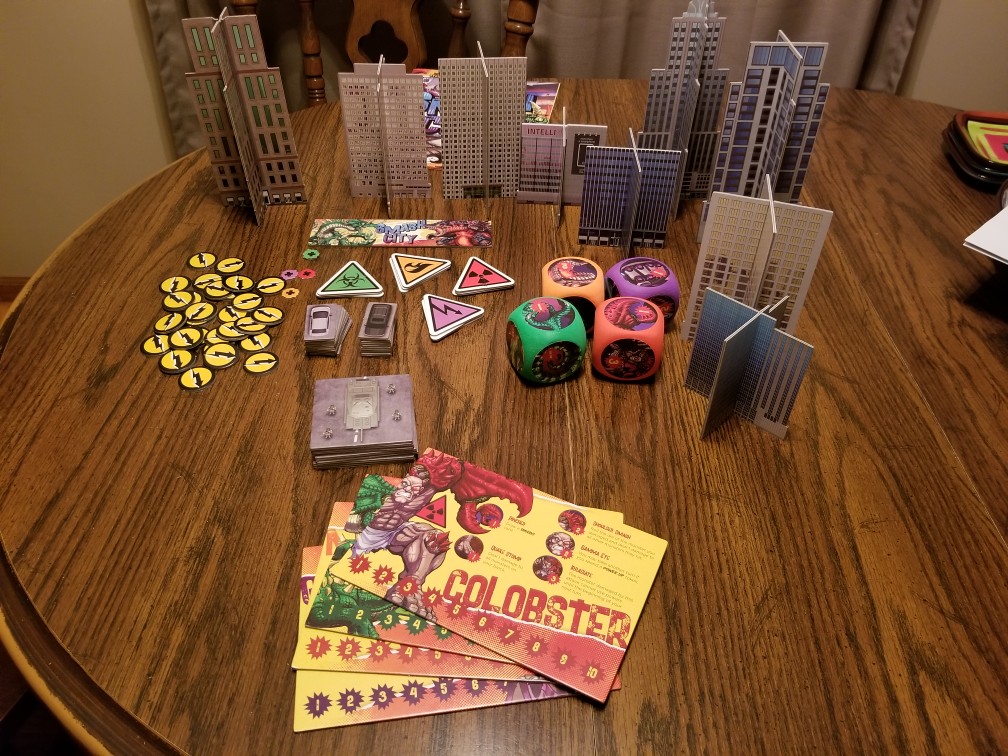 After each player has chosen their kaiju, they grab their health tracker and monster die. Each kaiju has their own colored die with their unique attacks represented on each side of their die. Each kaiju also has a card that shows their ten spots of health, along with the damage and special effect of each attack that exists on their die. The kaiju cards also have a rundown of how to play on the back of each one and I really appreciated that. You can reference the rules in the rulebook, but not having to flip through the book feels nice. Next, all players place their kaiju die somewhere in the city and then draw a smash card from the top of the smash card deck. Smash cards are special cards that you can play in certain situations for an advantage. For example, you may be able to use one after an opponent rolls their die in order to force them to reroll. Other smash cards can boost the strength of an attack, allow you to perform a special attack against an army tile, negate an opponent’s smash card, and much more.

A player starts their turn by picking up their die and moving to a chosen edge of the city. The player tosses their die underhand at the buildings and tries to knock them over. If they successfully knock over any buildings, they draw one smash card for each toppled building. If any of the buildings fall on an enemy kaiju’s die, then the affected kaiju takes two damage. The affected players moves their health tracker up two numbers on their kaiju card. If the tossed kaiju die is touching a building (standing or fallen), then they place one of their element symbols on the building they’re touching. Each kaiju has a specific element that they release, such as radiation, electricity, flame, or corrosive, and has three cardboard symbols that can be placed on buildings. It’s important to note that if the thrown die bounces off of the city mat and leaves the city, then none of the above effects take place. In this case, you place the die in the center of the city and immediately end your turn. 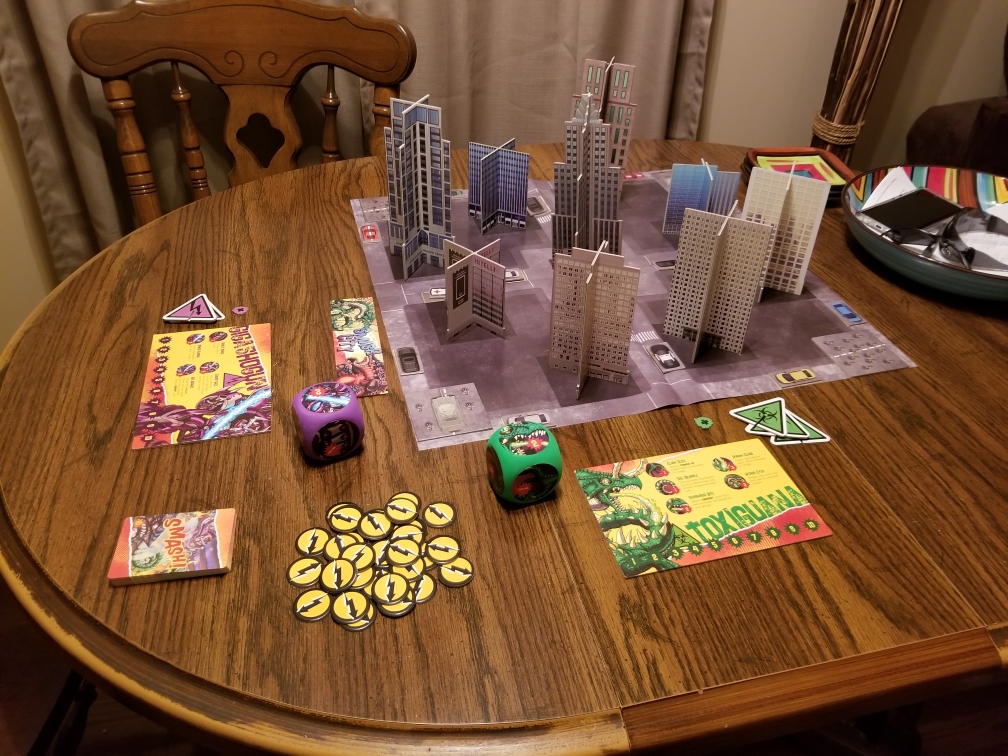 If it stayed in the city, after following the above steps, you also check to see if any army tiles are stationed in the same city block as where you landed. The thrown kaiju takes one damage for each army tile on the city block. The current player compares the picture on their die roll with their kaiju card to see how much strength the attack has and what special effect they can activate. The current player can choose to attack another kaiju, attack an army tile, or toss a car at another kaiju. There’s a range ruler that you can use to see if you’re within range to attack. You must be able to touch both your kaiju die and your target with the ruler at the same time without moving anything else. If you attack another kaiju, they take damage equal to whatever your attack’s strength is. If you attack an army tile, you flip the tile and check its defense value. If your attack value is equal to or higher than the defense value, then you discard the tile and resolve its effect. If the attack isn’t strong enough, you flip the tile back to how it was and do nothing. The lack of a punishment is nice, but it also doesn’t force you to think carefully about your attacks. If you choose to toss a car, then you grab the car tile and toss it at an enemy kaiju die. If the car hits the die, they take one damage and the car stays where it lands. This attack method surprised me but I found it pretty funny. It’s not often that you toss cardboard cars like a monster in a city. Any time you damage an enemy kaiju, you collect a power-up token. These tokens are used in conjunction with certain cards, but they’re mostly used to help determine a winner later on.

Besides the attack, you may be able to activate a special effect based on the attack and the current situation. You can activate your attack’s special effect before or after attacking, which is pretty cool. Sometimes it’s better to use the effect first, while other times it’s better to wait until after. For example, GigaShogun’s rocket punch allows him to toss a car, while Magmaladon’s flame breath allows him to place a fire symbol on any building and attack a nearby army tile. There are some neat effects, but some are clearly way more useful than others. Once the turn is done, the current player grabs an army tile and places it anywhere they choose in the city. This represents the army calling in reinforcements as a result of your monstrous rampage. One thing I want to mention is that the game doesn’t clarify what you’re supposed to do with the buildings after the turn ends. We assumed that we were supposed to pick them back up for the next turn, but we added our own twist to it. Instead of moving them back to their original area, we stood them up wherever they had been pushed to. This way it kept that feeling of a city being warped by monster attacks. 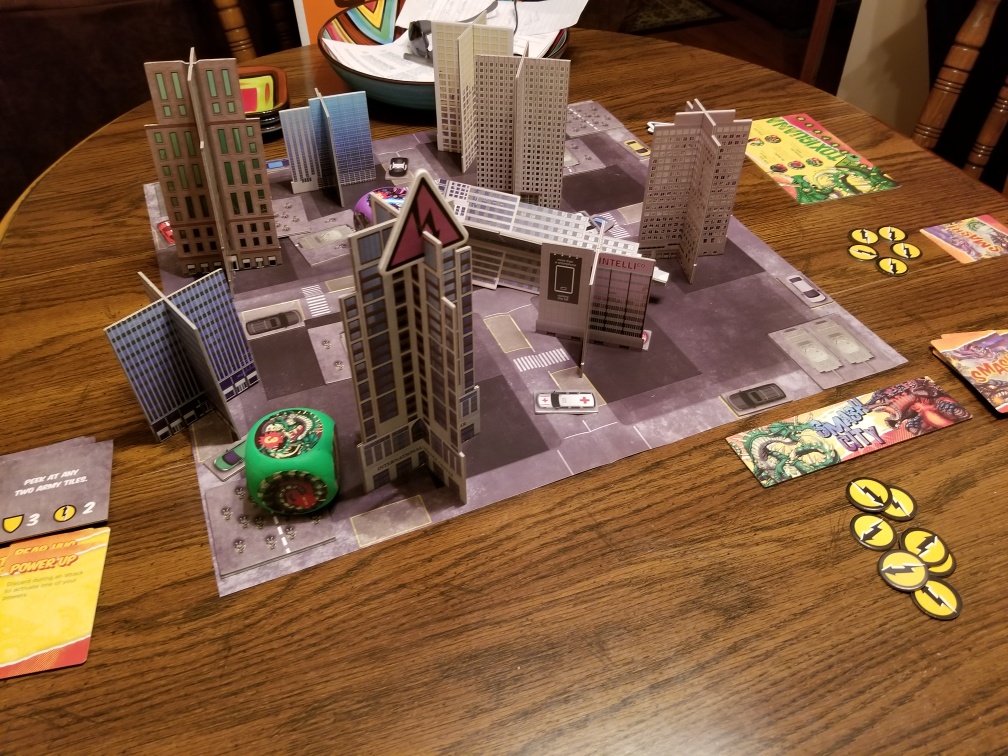 From here, the next person takes their turn and repeats the above steps; it’s fairly straightforward. The game ends when one or more kaiju have taken ten damage. After a kaiju is defeated, the player with the most power-up tokens wins. If there happens to be a tie, then the player with the most life points remaining wins, followed by the player with the most smash cards. There are a lot of factors that can determine how fast a game goes, especially since only one kaiju has to be defeated before the game ends. The unpredictability is kind of nice and keeps things a bit fresh. The longest game I had lasted around 20 minutes, but it was enjoyable. At the same time, it feels like ten health is too low sometimes, especially if you get bombarded by the army and another kaiju’s attacks.

The designs of the set pieces are well-done and it doesn’t take long to set the city up. It does a fair job at creating the city aesthetic without requiring much effort from the players. As for the dice, they were much softer, bouncier, and lightweight than I had expected. After playing, I realized how much thought was put into them; the creators guaranteed that you couldn’t cheat when rolling these dice. Even holding a die an inch above the table and letting it go caused it to bounce off to the side and roll. As for gameplay itself, it takes some time to get used to balancing the strength required to knock down the buildings without flinging the die out of the city. The shorter buildings are harder to knock over, which is a bit of a bummer. Even so, Smash City is an interesting game that lets you live the fantasy of being a massive monster rampaging through the city, even if it’s only in dice form.

Smash City is an interesting dice game where you throw a die at cardboard buildings to simulate monster attacks. It takes some getting used to, but the active aspect of the game is kind of neat. The game design is well-done and the rules are fairly simple, but sometimes it feels like the games can go too quickly with only ten health.

Codi loves to play video games and watch movies. He will watch almost any kind of movie just to experience them. His ideas take inspiration from the shows and movies he watches, and games he plays. He also loves a good pun.
Related Articles: Smash City
Share
Tweet
Share
Submit