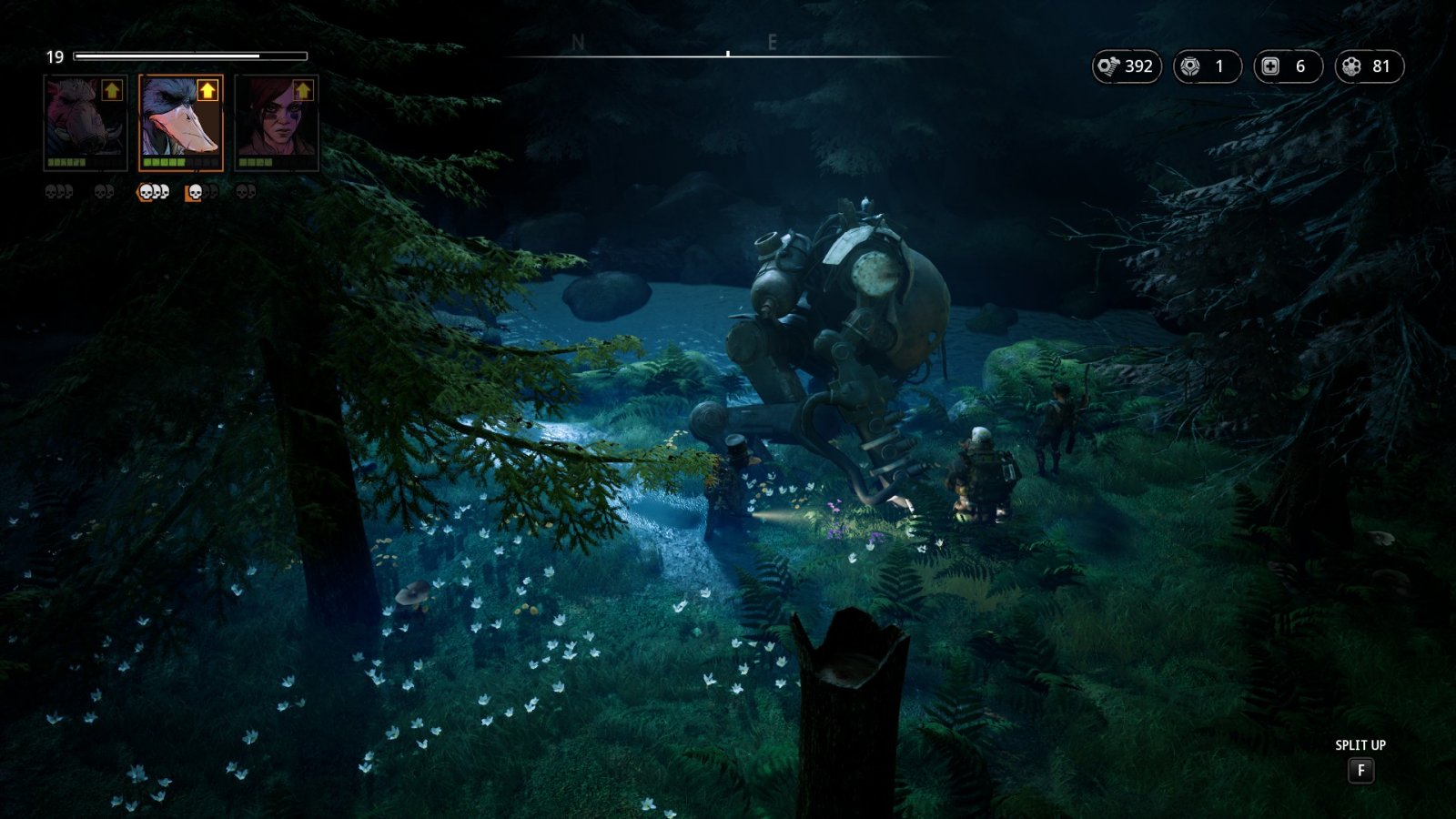 I’ve always had a somewhat strained relationship with turn-based tactical games. In theory, the idea of coordinating a squad and cleverly using limited resources to overcome difficult opponents appeals to me. But in practice, I’ve found them frustrating more often than not. There are often gaps in the information they give you — unaccounted enemy sightlines, unclear attack angles — that leave a lot of space between intended actions and real outcomes. Their worlds can also feel strangely disconnected, particularly in games like XCOM where you’re parachuting from battlefield to battlefield without ever getting a feel for the spaces that connect them. Then there’s the long failure spiral that so many games of the genre embrace, where a couple of missteps 10 minutes into a mission can leave you hopelessly overpowered 30 minutes later. Mutant Year Zero: Road to Eden doesn’t fix all of these problems, but it at least approaches of them in an interesting way, thanks to its unique blend of stealth and tactics.

We recently got our paws on a demo of the game’s first few hours, which you can read to get an overview of the game. The short version is that you control a squad of mutants as they make their way through the wasteland, searching for scrap to keep their settlement, the Ark, running. You’re free to roam as you please until you’re spotted by an enemy, at which point the game shifts into turn-based combat. Road to Eden manages this duality well. The transition from exploration to combat is seamless, swapping back and forth without loading, changing maps, or arbitrarily repositioning characters. If any of your characters are hidden from the enemy when you initiate combat, you can choose to keep them out of the fight entirely unless they’re spotted.

Choosing the right time to engage is key to your survival in Road to Eden. If an enemy spots you, they’ll alert all their pals in the vicinity to your presence at their first opportunity. Enemies can outnumber your three-mutant crew three to one or more in some areas, so you need to do everything you can to keep that from happening. Fortunately, your enemies’ patrol routes will often leave them isolated and vulnerable to a sneak attack, giving you the chance to take them out before they can raise the alarm. I was a bit disappointed to see that stealth really only gives you a shot at stealth kills, rather than opening more interesting options like setting up traps or manipulating the environment to your advantage.

Making your way around an enemy stronghold and silently executing guards before starting open combat against a weakened force can be incredibly satisfying, but it can also be a major source of frustration. In stealth games like Metal Gear Solid or Mark of the Ninja, half the fun is frantically taking out your pursuers and slinking back into the shadows when you’ve been spotted. That’s just not possible in Road to Eden. Once enemies know you’re around, they also know exactly where you are. This seems to be due in part to the odd way the game handles sneaking. Once an enemy spots you or hears you, your cover is blown for good. So if you kill an enemy, and their death alerts another enemy (as happens sometimes, usually with Pyro units that drop molotovs upon death, or robots, which explode), that second enemy automatically knows your position even without seeing you, since the first, now dead, enemy knew it.

The percentage based chance to hit inherent to tactical games also seems at odds with the meticulous planning and flawless execution demanded by Road to Eden’s stealth mechanics. When you miss a crucial stealth shot with a 75% chance to hit, or need to rely on each of your characters getting a critical hit to kill an enemy in one turn, save-scumming starts to feel like an essential tactic.

All of this can be chalked up to design decisions that some players may enjoy, but there are a lot of technical issues with hiding and combat as well. On a few occasions, I hid behind a wall (you toggle hiding behind objects with a mouse click), and was phased through to the other side of the wall, into an enemy’s view, when I came out of hiding. Quite a few times, I also had characters get stuck in the hidden state, refusing to follow the rest of the crew until I performed the correct ritual of hiding and “un-hiding” everyone in different sequences. Characters will sometimes spontaneously turn their flashlights on when exiting combat, which can alert enemies you were trying to sneak up on. In combat, mousing over a spot on the map will show you what percentage chance you have to hit enemies from that space, but I frequently found that the display was wrong, and I either had a much lower chance to hit once I moved my character there or that my line of sight was completely obstructed. Certain squares in the combat map will inexplicably leave your characters with no chance to hit enemies right beside them, and flanking angles are generally hard to read. In some spots, enemies on the second floor of a building were able to spot my characters below them and even shoot them through the floor.

Despite these kinks, combat in Road to Eden is still exciting. Late-game enemies can hit extremely hard, some taking your characters out in one or two hits, but a fully upgraded crew will have plenty of options to deal with them. Provided you’re sneaky enough to avoid any instant death scenarios (or turn the game’s difficulty down enough to make stealth less do-or-die), there’s plenty of room for creative approaches to combat, largely due to the mutation mechanic. As you defeat enemies, your characters will level up, granting them access to mutations that imbue them with new powers. These can range from the ability to leap to high ground, shut down mechanical units, or charge and knock down enemies, to less sexy but still useful upgrades like a higher critical hit chance or more health. If you use your abilities to the fullest, fights can become truly epic affairs, with characters popping out of cover for stealthy critical hits, rushing and leaping across the battlefield, burning foes out of cover with grenades, and mind-controlling combatants to turn against their friends. The roving gangs of irradiated humans and directionless robotic police will also engage each other on sight, which can turn a minor brawl into full-out war if you’re careless enough to attract a lot of attention — or tricky enough to lure your enemies into each other.

Of course, you’re not fighting just for the fun of it. You start the game controlling Bormin and Dux, two mutant operatives called Stalkers for the human enclave called the Ark. Near the beginning of the game, you’re tasked with tracking down Hammon, an engineer vital to the Ark’s survival, who’s gone rogue chasing a pipe dream of salvation along with a couple of other Stalkers. You meet up with some fellow mutants along the way, adding them to your coterie of Looney Tunes misfits. Aside from some occasional banter and a few cutscenes narrated by Bormin, that’s about all the story you get. The writing is generally good, if a bit on the gruff and edgy side, and the voice acting is great all around. Still, I was hoping for a bit more depth to the story, especially when the game is set is such a strange world (based on a popular tabletop RPG of the same name) with so much to explore. Road to Eden also fails to develop its characters or the Ark itself in any meaningful way, which is a shame considering how important the Ark’s community is in the tabletop game.

All that would add up to a decent tactical game with a missed opportunity to do more with its world, but Road to Eden is unfortunately dragged down by performance problems. The game was a little more choppy than I’d expect with any graphics settings, and there were frequent, albeit slight, hitches when opening menus or just after loading a new area. Much more severely, there were times when simply opening the inventory menu caused the game to completely lock up, forcing me to alt+tab out and kill the game from the task manager. I never lost much progress to these freezes, and they never happened in combat, but it still added a layer of frustration on top of a game that I already had mixed feelings about. Overall, I enjoyed Mutant Year Zero: Road to Eden too much to consider it a bad game, but its technical flaws and shaky mechanics keep me from calling it an entirely good one either.

Mutant Year Zero: Road to Eden’s blend of turn-based tactical combat with stealth is interesting, but not always successful, and its story doesn’t take advantage of its unique setting. Although the ability to explore the world and sneak up on enemies adds a fun twist to the genre, it brings unwelcome complications and technical hiccups as well. I also ran into numerous performance issues, including game-ending freezes, that strained my initial fondness for the game.

A committed indoor kid, Bryan moved from Pittsburgh to Los Angeles for a prettier landscape to ignore. They can be lured outside with promises of taco trucks and film festivals, and enjoy trawling through used book stores for works on the occult. Bryan has been gaming since the SNES era and is a sucker for good pixel art.
Related Articles: Mutant Year Zero: Road to Eden
Share
Tweet
Share
Submit