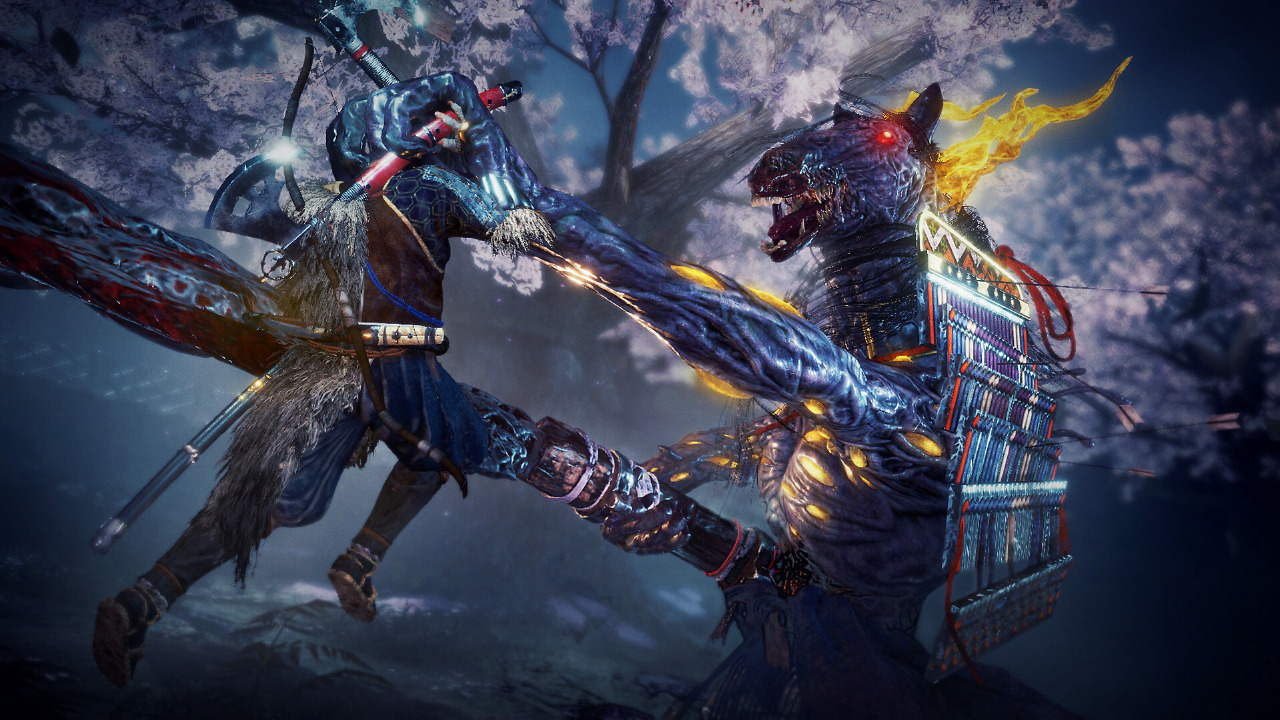 I played the original Nioh when it first launched back in 2017. I enjoyed it well enough, but I remember wishing it was more on the difficult side. Too many bosses were humans that were too easy to kill, and most of the normal Yokai enemies didn’t put up much of a fight. Nioh 2 certainly fixes the issues but introduces a few more while doing so. Instead of being too easy, it’s now a little too tedious.

Nioh 2 is the Dark Souls of looter-shooters. Well, It’s not much of a shooter but you get the idea. It’s a loot-based game and I really enjoy it. I love collecting different armor sets and seeing how I can maximize my potential based on my play style. Do I want to go with the armor that heals me after a kill even if it slows me down? Or is it better to be quick and use less Ki while attacking? It’s easy to customize your sets of armor to fit your playstyle

Speaking of customizing, you actually get to create your own character this time around! The character creator is pretty in-depth, allowing you to customize your human form and Yokai form. I had fun playing around with all the different options. I also appreciate that it isn’t permanent, you can change your looks whenever you like by visiting your hut.
Shrines also make a return, acting much like bonfires from the Souls games. You can rest to heal, but enemies will respawn. You get the idea by now. You can level up, summon help, and offer items to the Kodama you have been collecting. Yeah, those little green guys do more than just hang around a shrine after being helped. You can purchase blessings with them. I always go with the one that makes healing items drop more frequently. You can also buy items from them such as arrows, bullets, and healing supplies if you don’t feel like grinding for them.

Once you have your character all set up, it is time to decide how you want to play. You get to choose two weapons and a spirit animal each with a slight boost in stats. I went with the odachi and dual-hatches since I wanted to focus on strength and stamina. Don’t focus too much on these as levels in a stat really doesn’t do much and you will find yourself with plenty of every weapon. If you are struggling, switching things up might help. 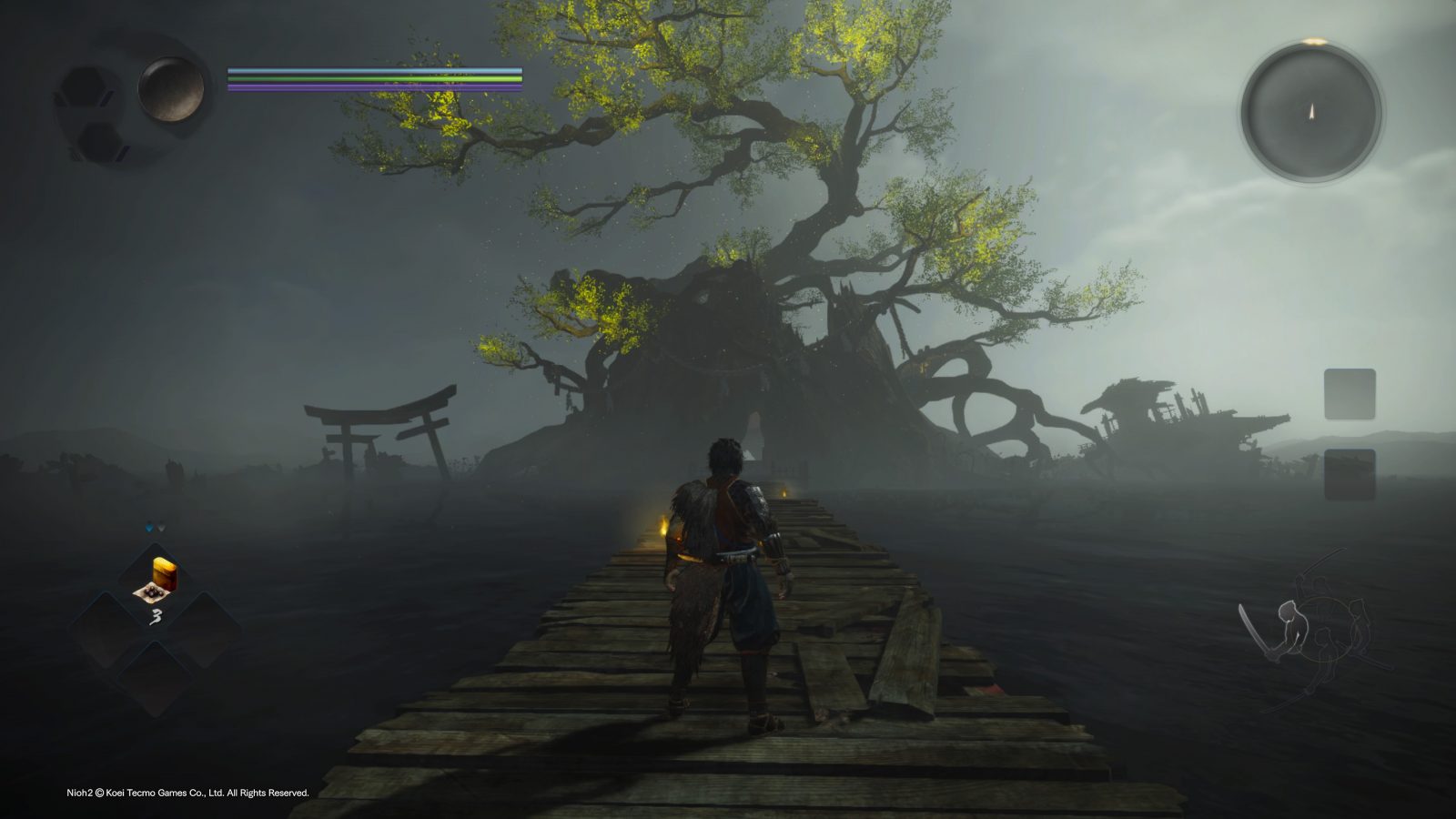 The start of a journey!

Nioh 2 does continue to offer a fresh take on the Souls formula. This is a game that saw what FromSoft was doing and decided to make it their own, rather than just trying to spit out the same formula. Nioh 2 is faster and far more visceral than any Souls title, even Bloodborne. It also has a linear story, an in-depth tutorial, and is level-based rather than just having a single open world.

Something that is similar to the Souls series is graves. You have Benevolent and Bloody Graves. Benevolent Graves offer AI partners you can summon while Bloody Graves are opponents you can fight for gear and Ochoco cups which can be used to summon other players and activate Benevolent Graves. I really don’t suggest using Benevolent Graves. Not because I think it’s weak to ask for help but rather because they don’t offer much help. The AI is terrible. They almost always just immediately die by fighting in poison or standing in fire. Just don’t waste your time with them.

The story isn’t fantastic, but it held my attention and gave me a good enough reason to go slay bad guys. You play as a silent samurai who is also part Yokai. You go and collect special stones that can potentially change the tide of war so they are also super valuable. It’s not the most interesting story in the world but it gets the job done.

The story, while being told through very well animated cut-scenes, really does take a back seat to the gameplay. You usually get one before and/or after a mission and then it leaves you to go kill in peace. I appreciate this method as it allows for the story to be told without interrupting the flow of gameplay. I also appreciate that everything is much less vague than you find in a lot of the Souls titles. When you search corpses, you can hear the last thoughts of the dead, and Team Ninja does a great job of using this to flesh out the story of areas you are in or reveal secrets. One of the levels features rivers of poison, but by exploring and listening to the voices of the dead, I figured out that destroying these snake statutes would drain the poison. This is a smooth way of giving hints without interrupting the game. 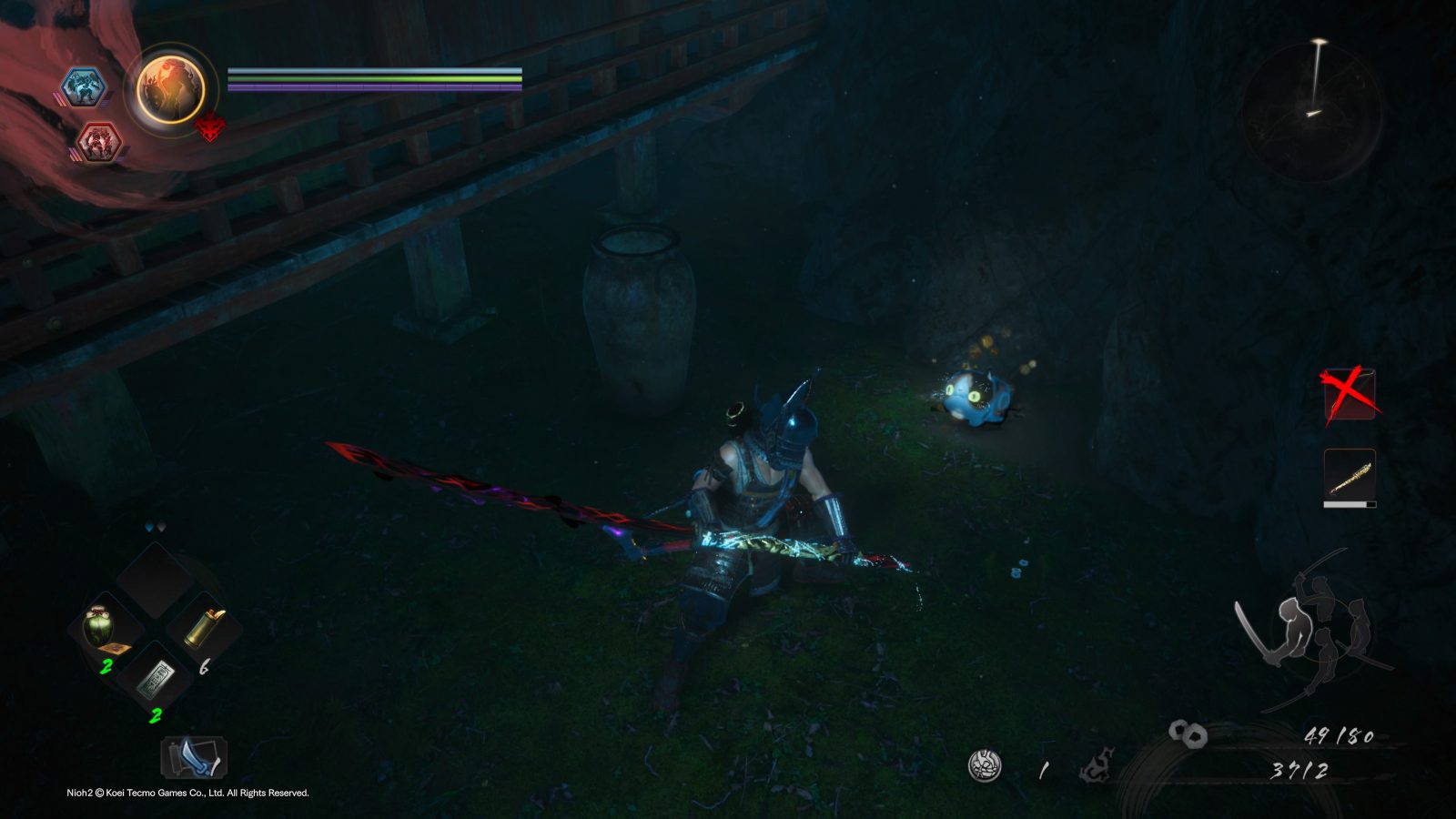 Not all Yokai are enemies! Just most of them.

I also appreciate that Nioh 2 understands it may have a bit of a learning curve. If you find yourself struggling, you have the option to return to the tutorial every time you die. This is great if you find yourself stuck on something or forget how to do a certain move. As the player, you have a lot of different abilities at your disposal and it really is easy to get lost in them. You have a burst counter that counters powerful enemy abilities, you have two Yokai abilities that you can change by collecting the souls of defeated Yokai, you have three different combat stances to switch between, a plethora of items and skills. There is a lot at work here and it nice to be able to get a refresher if you need it.

Out of these, it is most important that you master the burst counter and the three different stances. Whenever an enemy gets a red glow about them, that means you have to burst counter it. While you can dodge them, you want to use the counter because it deals devastating Kai damage.

What’s Ki? Well, that’s what you use to attack and defend. If you manage to deplete your opponent’s Ki, you can do a critical attack for massive damage. This is also important to the three combat stances. The high stance depletes a lot of Kifor high damage, low stance deals less damage and is better for defense, while mid is a mixture of the other two. I’m usually high stance for normal enemies and mid stance for bosses. I almost never use the low stance, as I’ve found that it doesn’t deal enough damage for me to find it worthwhile.
You have more than a blade at your side, however. Ninjutsu and magic also play a role. Ninjutsu gives you items, like shuriken to throw and improve the strength of items. Magic, on the other hand, can enhance your weapons or allow powerful spells to give you a hand in combat. These spells and ninjutsu replenish at shrines so they are a regular part of your arsenal. I suggest getting the healing spell so you always have a means of healing yourself. 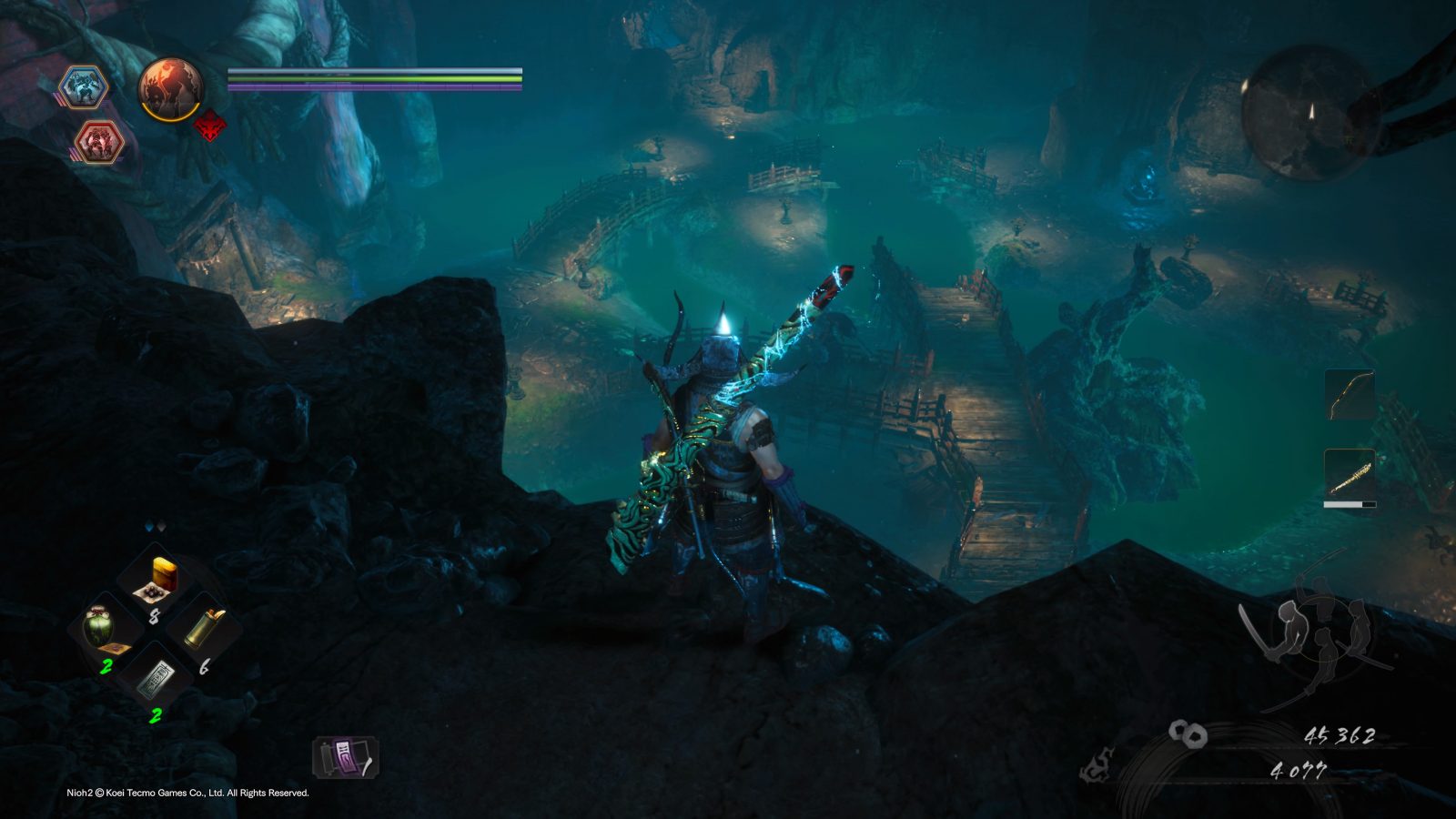 I always enjoy looking on to see what challenges await me.

One feature that makes a return from Nioh that I still really like is the Ki Pulse. This pulse is used after attacking to regain your Ki, which rewards an aggressive play style and keeps the pace of battles very quick. This does make some of the fights way too easy, however.

All the systems play great together during normal gameplay. I have a slight issue with my stance randomly switching to low stance, but that mainly happens after I die, so it was simple enough to manage. My biggest gripe with Nioh 2 is it just isn’t balanced very well. Human enemies are pretty much always a joke. I just slash them to death using the Kai Pulse and they often can’t even get a swing off at me. Yokai, on the other hand, have way too much health and takes too long to kill. It’s not that they are super hard, it’s just that I have to avoid so many attacks and counter perfectly so many times that I’m almost bound to make a mistake at some point. This isn’t a big deal in the levels themselves, but it makes the bosses a chore.

I really want to like the boss fights of Nioh 2! They fixed my main complaint and removed the easy human bosses from the first game but now they all take too long. Nioh 2, with its combos and skills are built for fast-paced action. It just doesn’t translate as well when you are fighting giant bosses that can’t be stunned, hit like a truck, and take almost no damage from your attacks. Even in your most powerful form, when you are able to temporarily shift into a Yokai form, you still don’t deal much damage. This just turns the bosses from fun tests of skill to an endurance run. It makes dying in a boss fight far more frustrating than in any Souls title because it took three times as long to whittle down a boss. Even a critical attack, which isn’t easy since they regain their stamina by shifting into a dark realm, doesn’t deal that much damage. 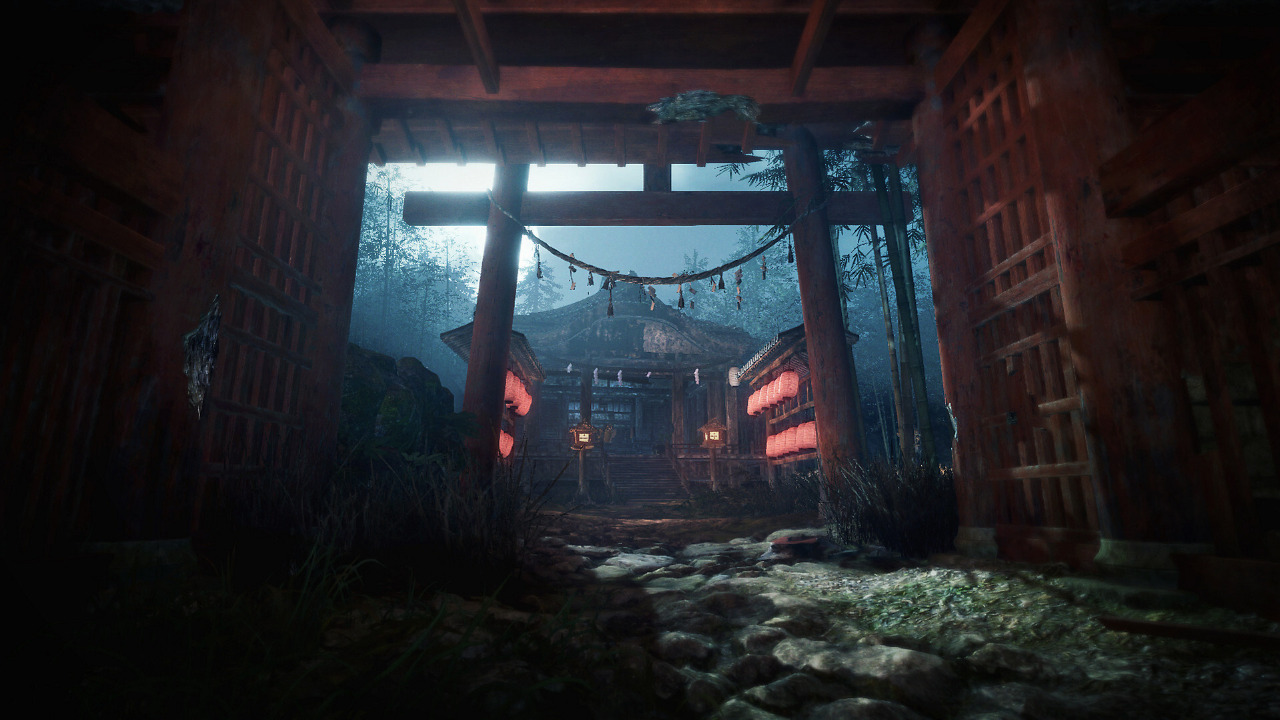 I am a sucker for ancient Japanese architecture.

This is a shame because I love the boss designs! Their skill sets and stories are all great! I love seeing what the next boss is going to throw at me and how I’m going to plan around and counter it. They could have half their health and still provide an ample challenge. I could beat the bosses, I just wish they didn’t slow the game down so much. Still, Nioh 2 is plain fun and that never stops, even if the bosses could be a little less tedious.

The levels themselves are all great! I loved exploring and I loved all the Japanese architecture. I’m a sucker for samurai games and Nioh 2 scratches that itch. Each level is packed with things to collect such as gear, Kodama, and a Yokai cat that can puff up like a pufferfish. Exploring these levels for all this stuff is always fun.

Nioh 2 does a lot right and fixes many of my issues with the first one. Much like the first one, however, it is a flawed experience. It’s still incredibly enjoyable and certainly worth a playthrough, I just wish it was a little less tedious in areas.

Nioh 2 does a lot right and fixes many of my issues with the first one. Much like the first one, however, it is a flawed experience. It’s still incredibly enjoyable and certainly worth a playthrough, I just wish it was a little less tedious in areas.

Austin Fern has been playing video games his entire life. The first console he truly fell in love with is the PlayStation 2 with Sly Cooper, God of War, and many others really leaving an impression. He enjoys all genres of games from FarCry 5 to Danganronpa and everything in between.
Related Articles: Nioh 2
Share
Tweet
Share
Submit