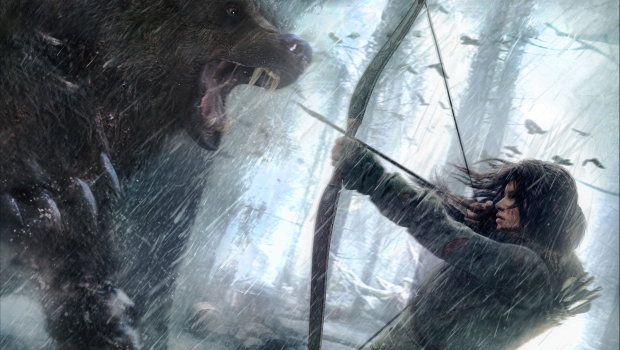 Eric’s review of Rise of the Tomb Raider echoed how I felt about the game’s motivation undercurrents. It was as much about Lara’s hunt for the Divine Source as it was about her own growth after the events of Yamatai Island. Coming to grips with the mystical, as well as the mundane, Lara’s growth takes her into new personal territory. Xbox One owners got to take that journey with an exclusivity agreement for the holiday of 2015, but now PC gamers get to experience this fantastic adventure.

To maximize the featureset of the PC version, Crystal Dynamics and long-time partner Nixxes are once again teaming up. Having worked on everything from Legacy of Kain: Soul Reaver to Deux Ex: Mankind Divided (and pretty much everything in between), Nixxes is responsible for delivering Windows 10 support, 4K resolution, and a whole host of features that only a well-equipped PC gamer will have the pleasure to experience.

Even more beautiful than before.

The first change, and probably the biggest improvement is the inclusion of Horizon Based Ambient Occlusion, or HBAO+. This technology improves on the already-excellent shadow work present in the Xbox One version, giving deeper blacks, cleaner shadow edges, and by contrast, more life to lighting sources like fire or sun rays. What may have looked like a grey and slightly darker spot now looks like a natural shadow.

Conversely, one of the features added to the PC version is 16x anisotropic filtering. Anisotropic filtering helps smooth out the aliasing (think jagged edges) that you might see on distant textures. It’s not likely you’ll notice this nearly as much as some of the other features while in motion, but if you stop to “smell the flowers” a bit, you might see those distant rocks and cliff edges look a little more sharp than before.

Tessellation isn’t a new concept in gaming, but to boil it down to something easy to digest, it’s essentially the math that breaks smooth curves into their more base parts. This allows developers to build a circle out of a bunch of wedge-shaped polygons. Rise of the Tomb Raider on PC supports Tessellation at the hardware layer, providing much more depth to textures as they aren’t essentially “painted on.” Nowhere is this more obvious than the mountainsides. The cliff face juts and sinks more naturally, as do ice flows and snow. The Xbox One version looked great, so this might not stand out as something new unless you compare the two versions side by side, but it’s very clear that the PC version is a more realistic look.

The HBAO+ lighting is soft, natural, and amazing.

Alongside the anisotropic filtering improvements is an improved level of detail setting. Enhancing the level of detail enhances the detail on buildings and objects in the distance. This sounds like a “gee whiz” sort of feature, but it has a real impact on gameplay. Once you reach a certain point in the game, you’ll find that it opens up a great deal. You can use your map and waypoints to navigate, but it’s far more immersive to use terrain and landscape to find your way to your destination. When the objects in the distance are far more detailed, it makes for a more memorable and beautiful horizon on which to orient.

The Xbox One and PlayStation 4 have both dabbled a little bit in dynamic foliage, but few game engines have enough horsepower to get it on consoles reliably. Conversely, this is probably the biggest improvement to the PC version of Rise of the Tomb Raider. Dynamic Foliage means that the relatively static or scripted foliage movements in the Xbox One version are replaced with plants that dynamically shift around Lara’s movements. They also react to weather, bristling as the biting cold winds whip through canyons or across a wide-open arctic expanse. It’s here that the game literally comes alive in a new way as the environment feels like it’s constantly in motion.

When you put all of these features together, it’s pretty clear that Rise of the Tomb Raider is going to seriously push your hardware. On my OriginPC laptop with it’s 980M GPU, 16GB of memory, and i7-4790 8-core processors at 4 GHz, I hovered between 25 and 30 fps with everything at maximum and at 1080p resolution. My desktop PC, a 4 core i7-3820-based system running at at 3.6GHz with 16GB of memory and a GeForce GTX 980 also hit the exact same framerate numbers. I was surprised to see these numbers during an indoor section…until I stepped outside and watched them rocket to over 60fps. It’s exactly backwards to what I expected, and I can’t rightly explain it, but with the latest patch and Game Ready NVidia drivers installed, I guess this is some version of normal?

Beautiful, even at a distance, thanks to enhanced LoD.

My laptop is more than capable of outputting to a 4K monitor, so I gave it a whirl and ran my benchmarks again and found that the game wobbled from between 20 and 40 fps, occasionally dipping into the ‘unplayable’ territory at that resolution, and without much visual benefit. Popping back to 1080p I began to fiddle with settings. Turning the Pure Hair settings to Very High instead of “on” (the max setting) added roughly 10 fps, and with almost no visual difference. With Pure Hair turned off, Lara’s hair looks pretty fantastic, but snow doesn’t accumulate, and it doesn’t move as smoothly, or fall off her shoulders as realistically. At Very High, it does both and with only a marginal bit of behavioral difference. Compared to the Xbox One version, Lara’s hair does look more full and a little less ‘stringy’, though neither version look ‘bad’ by any stretch.

Comparisons aside, there is one area where the PC, at any setting, wins over the Xbox One version — frame stability. Framerate on the Xbox One has little hitches in it, occasionally ‘sticking’ and causing a visual stutter. The PC has none of this, maintaining a smooth experience within whatever framerate your machine is capable of producing. Maybe it’s the SSDs in RAID0, but I doubt it.

With the game out only a short while, and the first patch and driver combo under its belt, I imagine that the team will shake out some of these oddities. That said, even if they didn’t, Rise of the Tomb Raider is an absolutely gorgeous game even on the lowest of settings. With a few more patches, and the potential of DirectX 12 support, the game will only improve from here.

YES! More tombs this time around.

You’ll note that I’ve not focused on the story, pacing, or anything that isn’t technical. I think Eric Van Allen did a fantastic job of covering those items in his video and written review, and anything I might add would just be repetition. If you’ve not checked his review out, you should do that right now.

Rise of the Tomb Raider

A bevy of incredible technical advancements offer vast improvements in some areas and minor ones in others. With a highly variable framerate, it’s clear more optimization is needed, but the game is highly playable on a variety of settings and hardware levels. The Xbox One version is no slouch, but if you’ve got the kit to run it, this is the ultimate edition you’ve been waiting for.

Ron Burke is the Editor in Chief for Gaming Trend. Currently living in Fort Worth, Texas, Ron is an old-school gamer who enjoys CRPGs, action/adventure, platformers, music games, and has recently gotten into tabletop gaming. Ron is also a fourth degree black belt, with a Master's rank in Matsumura Seito Shōrin-ryū, Moo Duk Kwan Tang Soo Do, Universal Tang Soo Do Alliance, and International Tang Soo Do Federation. He also holds ranks in several other styles in his search to be a well-rounded fighter. Ron has been married to Gaming Trend Editor, Laura Burke, for 21 years. They have three dogs - Pazuzu (Irish Terrier), Atë, and Calliope (both Australian Kelpie/Pit Bull mixes).
Related Articles: Rise of the Tomb Raider
Share
Tweet
Share
Submit