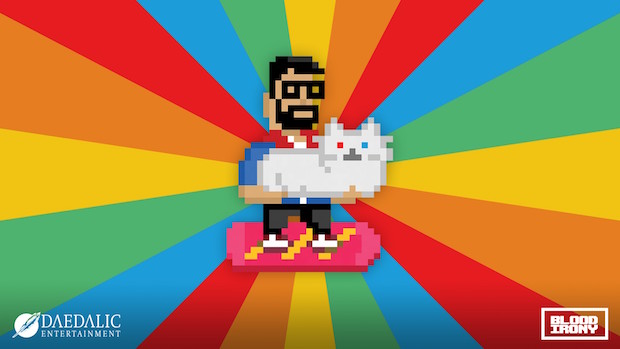 When you look at Shooting Stars’ Steam page, the description for the title is, “This game is the answer to one of the most important questions in life: ‘I can haz lazer kitty?’ Yes you can!” From that bit of text, you either chuckle or roll your eyes in the most violent way. This style of meme-heavy humor is one of the largest aspects of Shooting Stars, the newest bullet-hell action title out of developer Bloodirony. The bullet-hell style of video games has been one that has fallen out of favor recently, and Shooting Stars seems to know this as it heavily relies on the humor, as opposed to the actual gameplay.  But if that humor falls flat, can the game still hold up?

Portraying comedy in video games is always a tough task, and Shooting Stars does a very poor job of avoiding that. Instead of any kind of build up or cleverness, they lean directly into memes at every blink of an eye.  At the same time, they do not build off of them in any meaningful way. They are forcefully inserted into every situation, no matter the fit. For example, when you die, you get a random image such as the “feels frog” or “the most interesting man in the world” that reads “I don’t always die, but when I do, I die.” It’s lazy, forced, and far from funny.

That humor also surfaces in the boss fights you run into. Once you are dropped into the game, you meet a random boss that sprints away from you. Before doing so, he/she spouts a few lines of dialogue. These bosses are mostly comprised of plays on famous celebrities’ names. You run into people like Kanye East, Ronald Grump and Nuck Chorris, as well as actual gaming personalities such as Rami Ismail and Greg Miller. The personalities do very little other than those opening statements. The attack patterns and their spray of bullets are both randomly generated, and you see them repeated multiple times as you continue throughout your run.

To fight these bosses, you knock out a variety of fodder enemies with moderately interesting designs. Some look to be secret service workers, some are simple everyday people, and you mow them down quickly as you progress forward. Despite the bad taste the comedy leaves, the bullet-hell mechanics are actually very good. Your movement is quick and agile, and the gradual increase of difficulty is spot on. Many games of this ilk hit you with strong difficulty from the opening gate, but Shooting Stars actually holds your hand for a bit. It ensures you actually know what you are doing, and what specifically enemies do, before amping the difficulty up.

As you trounce through the many enemies, you will gather up special attacks as they are dropped. These attacks make the later fights much more manageable, and they are diverse enough to keep you guessing as you pick them up. No one pick-up is the key to moving forward; all feel equally powerful. These are one of the few reasons why you might want to come back to Shooting Stars. Another thing to bring you back is the game’s daily mode. This acts as a simple highscore battle that resets daily. The difficulty is ratcheted up, but the basic gameplay concepts remain the same.

Shooting Stars is a product that is plagued by one bad decision that acts as the focus of the entire game. If you eliminate the painful, embarrassing meme-focused humor that is rammed into your face every minute or so, you get a pretty enjoyable bullet-hell shooter. The mechanics are focused and it rolls you into the difficult play very well. But actually enjoying Shooting Stars is difficult, unless you find this sort of comedy endearing. If not, Shooting Stars falls flat.

Shooting Stars can provide some thrills due to its solid bullet-hell focused gameplay systems. The mechanics are tight and the special pick-ups diversify the combat a bit. But at the end of the day, its comedy feels more painful than enjoyable. The fact that it is thrown your way constantly only makes it more unenjoyable. It simply feels forced.