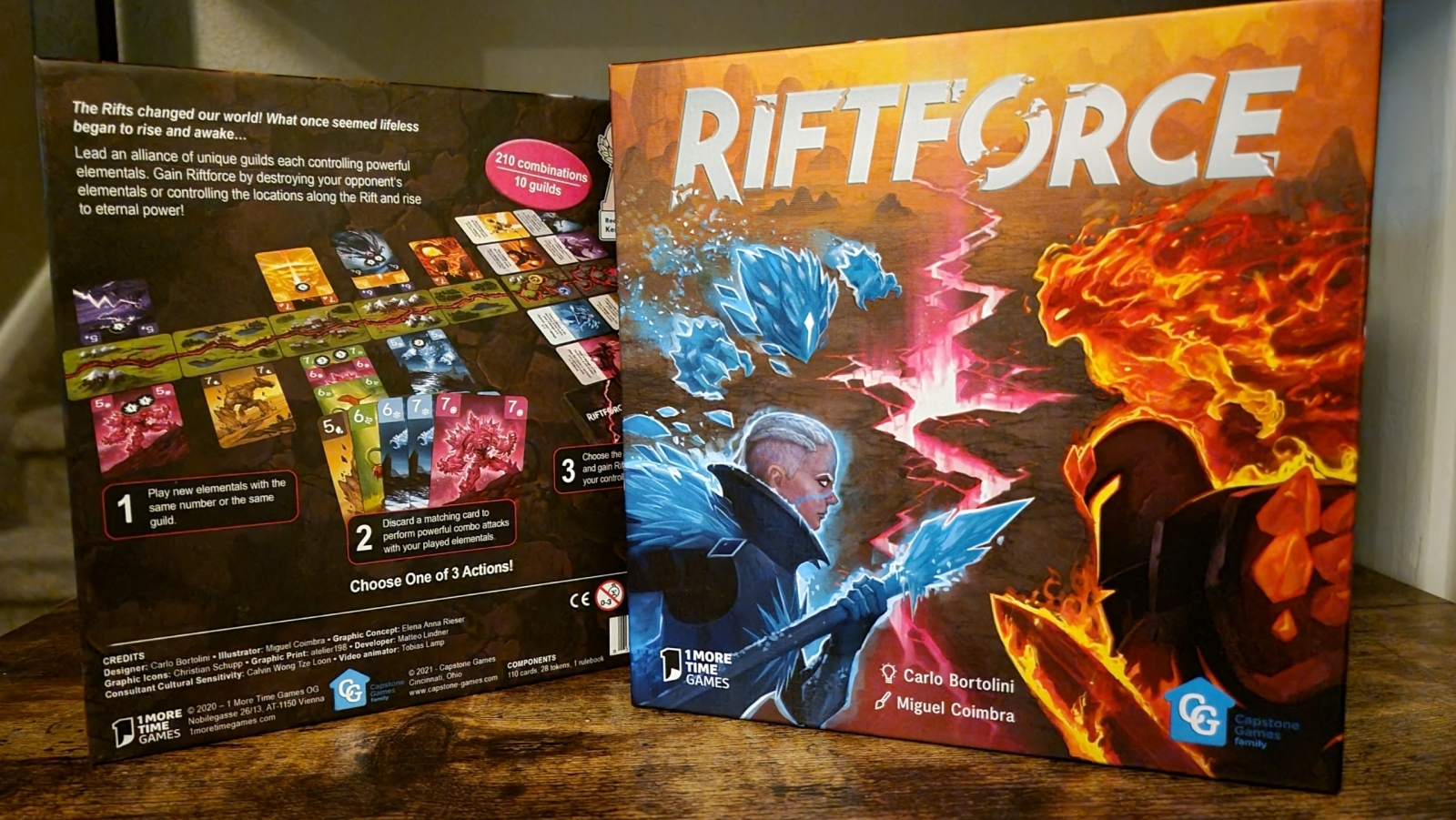 At first glance, Riftforce, by 1MoreTimeGames and published by Capstone Games, is a beautiful cacophony of creatures and magic. However, Riftforce is a deeper game that relies on strategy of elemental placement and action selection. In a beautiful and creative world designed by Carlo Bortolini and Miguel Coimbra, the battle for the Rift joins together Concept and art in a way that fully immerses the player. Each player takes on the role of a summoner and utilizes a set of elementals to square off against each other for supremacy of the Rift. 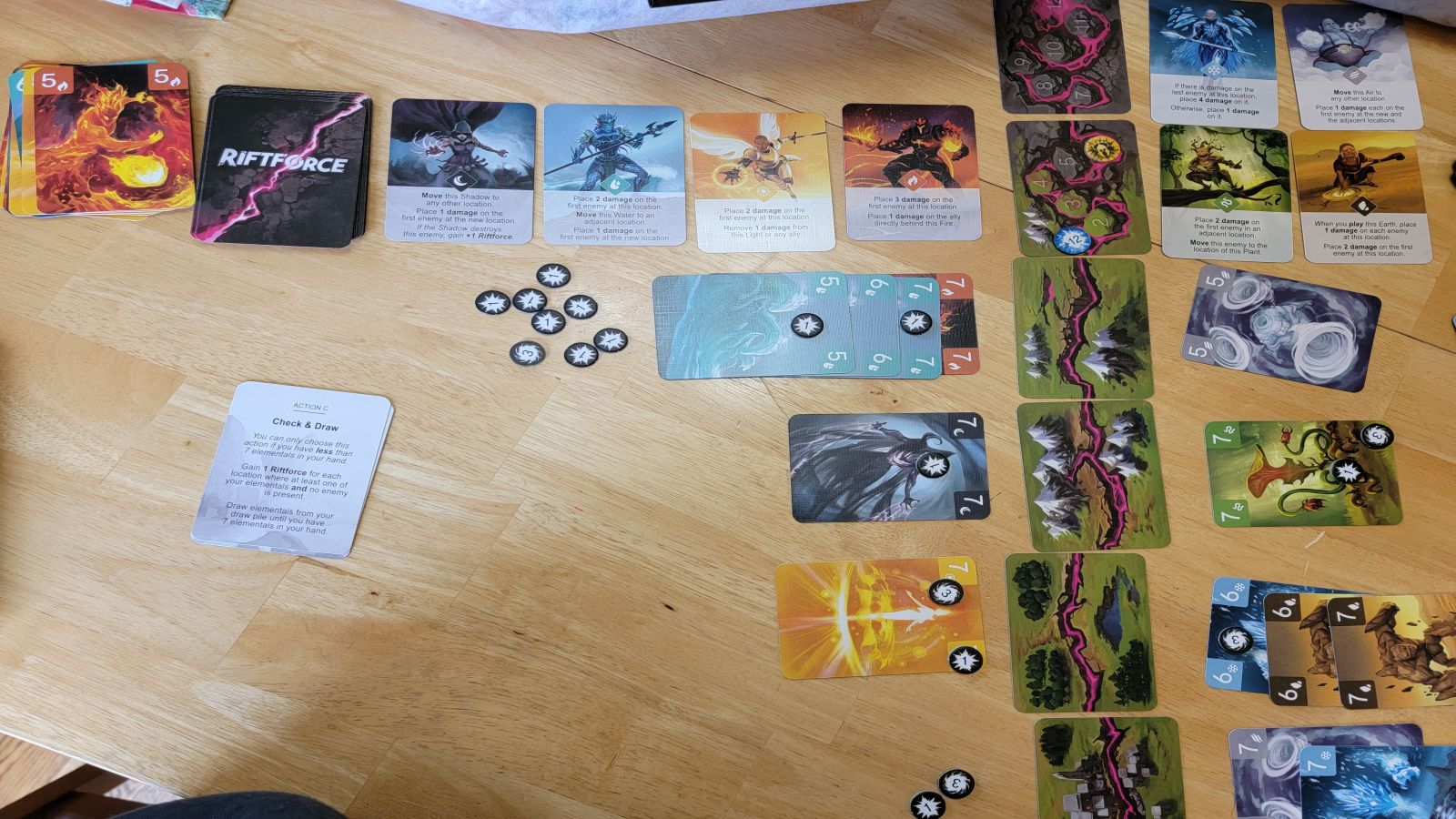 The rift is a welcoming and inviting space to play a game. What is reminiscent of a Trading Card Game evolves into an amalgamation that uses TCG and engine building game mechanics. There is a simple and minimal aspect to Riftforce that makes me want to keep it in my bag for multiple plays. This simplicity arises from no oversaturation of cards, easy to understand gameplay, and quick play times. The aesthetic offered by Riftforce is easily its biggest draw. It is that very same aesthetic that provides a payoff while playing the game.

Walking through the setup provided in the rulebook, The Rift is formed for both players to see. 5 map cards provide the locations where elementals are summoned, and connected to those 2 cards that track the amount of riftforce each player has. Seeing the cards laid out to form the rift and score tracker illustrates a beautiful fantasy world that keeps me coming back for more. From the different and detailed elementals for each guild, Riftforce’s world is filled with vibrant energy and unmistakable beauty. 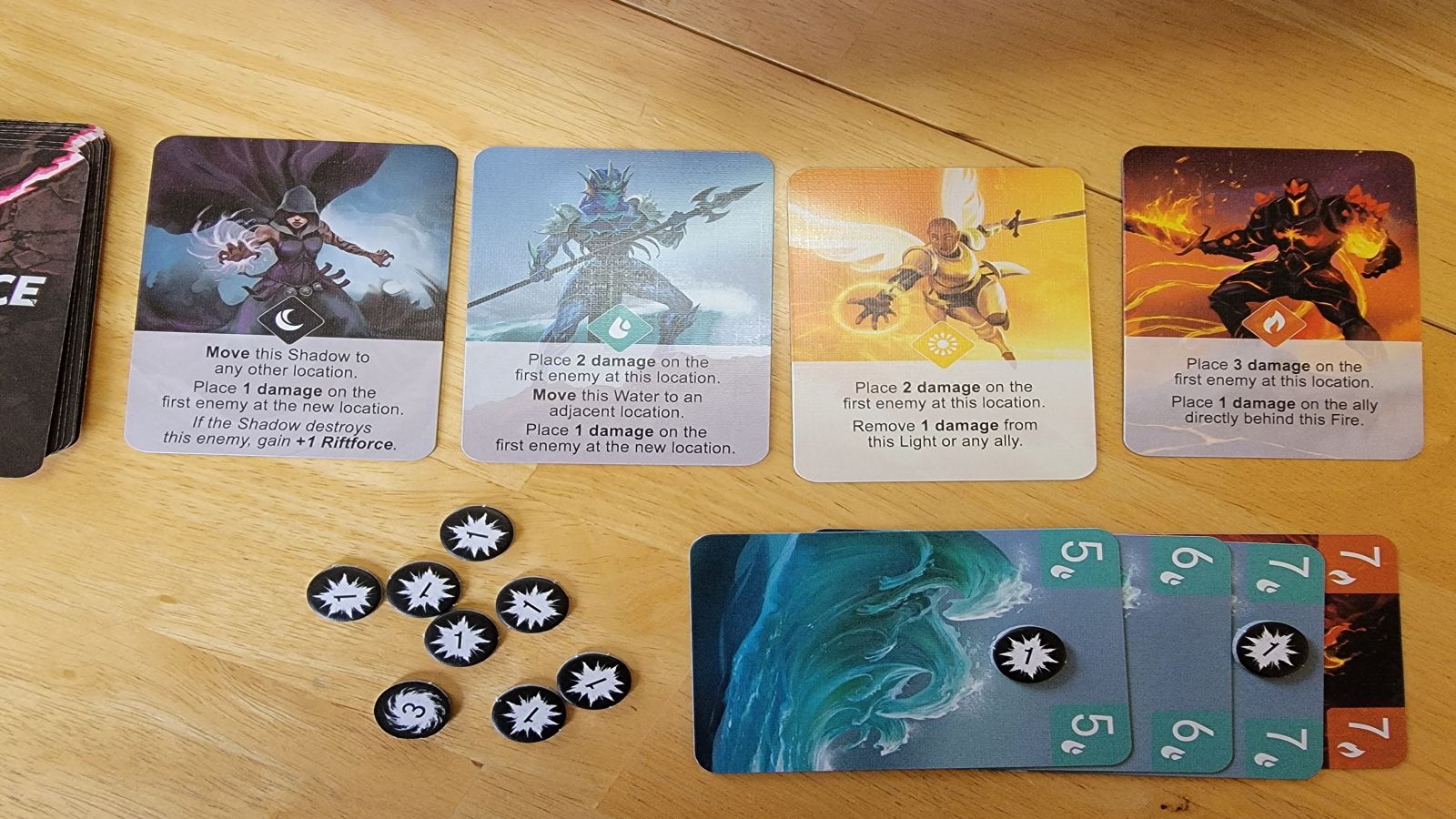 Playing the game is simple. At the start, there are ten guilds (factions) and out of those ten guilds one is discarded. Every guild is composed of elemental creatures that have varying health from 5 to 7. Each player then takes turns drafting a guildmaster from the available 9 guildmasters. Each guildmaster offers detail on what each elemental will do for its power during the game. After that is complete the remaining ninth guild is returned to the box. Once drafting is complete it is a simple matter of taking each guild’s set of cards and shuffling all of them together to make your deck. All the guildmasters are then placed next to the board for both players to see all the powers. Then on a player’s turn the player will choose one of three actions; play guild cards in up to 3 of the 5 active areas, activate already played guild cards to damage opponents elementals and score points, or score for areas you control and draw back up to seven cards. With that play continues till a player reaches 12 Riftforce or victory points. Upon reaching 12 Riftforce play concludes after both players have taken an equal amount of turns.

While I typically do not like games that force a lot of fighting/combat, having been on the fence about Riftforce for a while before playing it, I’m happy to say that Riftforce is a welcome addition to my collection. With its quick gameplay, beautiful art, and simple rules it is sure to make it to my table frequently. One of my favorite sayings is “less is more,” and this saying holds true here. Through this simplicity, the fantasy world Riftforce provides plenty of strategy from stopping your opponent to bolstering your elementals, and choosing the correct times to use certain actions to score Riftforce. After playing a couple of games the team at 1MoreTimeGames has a hit that is here to stay. With quick rounds, easy actions, beautiful art, and straight forward rules, Riftforce definitely supplies a great gaming experience.