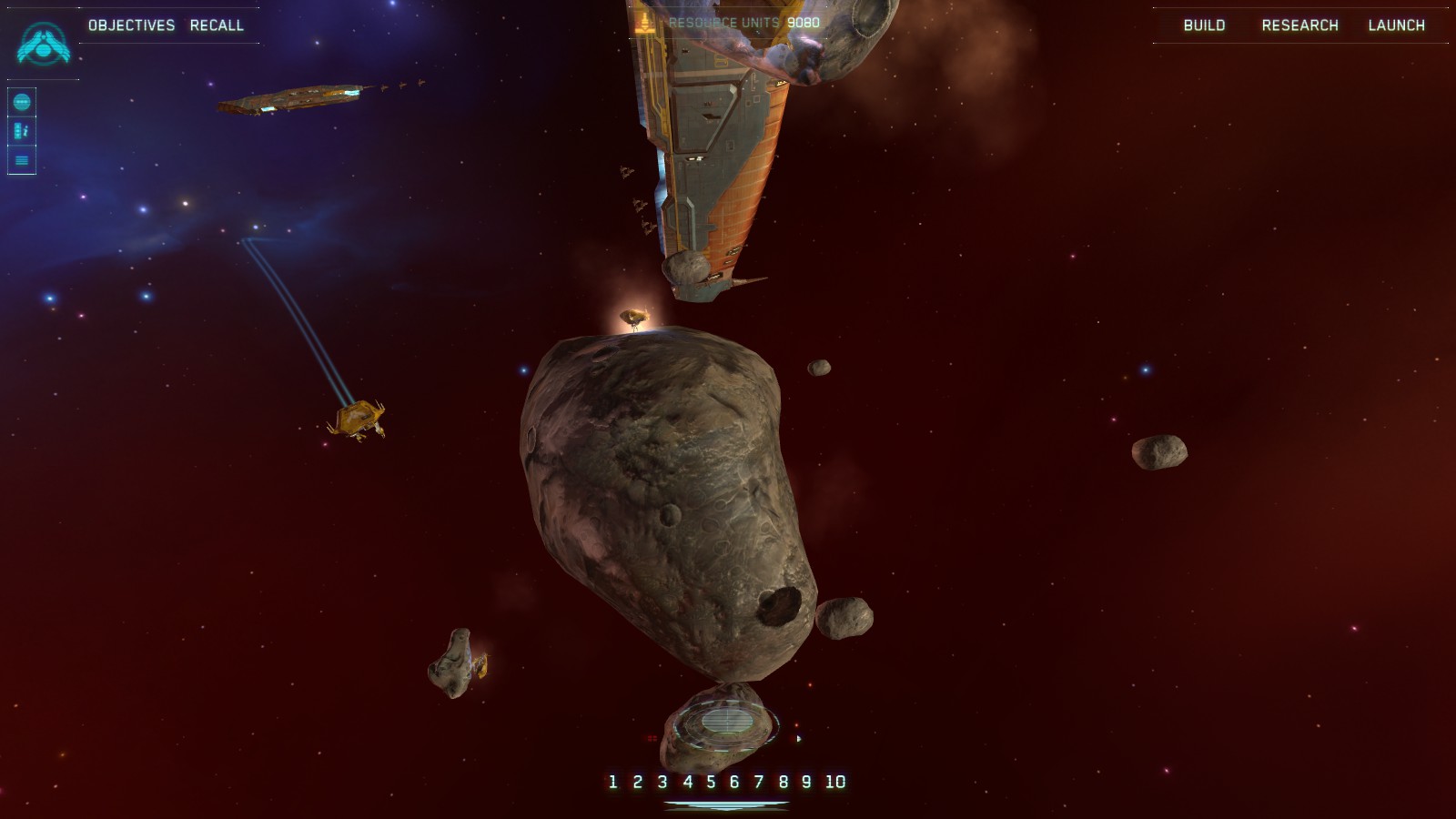 I spent several hours thinking about what words I would use to start this review. In the end, I think there’s only one way to say it. It’s a single sentence that pretty much sums up my thoughts.

That is because not only are the original games recreated with glorious graphical and sound updates, the experience has also been tuned up to be acceptable to today’s audience. If you were told that you were playing a game that came out in 1999 (and 2003 in Homeworld 2’s case) while playing this collection, I expect a great number of you wouldn’t believe it. The game just looks that good.

The attention to detail is astounding. You can zoom really close into the ship textures now and see things like windows, gun turrets, lights, and nice lines outlining the metal plates that make up the structure of every vessel. The visual effects and explosions aren’t the best I’ve ever seen, but they still compliment the game well, and even the debris scattered after a ship’s death doesn’t look too bad up close. The standouts here have to be the backgrounds though; the dying planet you leave early in the game sitting in the background perfectly sets the tone for that mission and the rest of the game that follows it.

The backgrounds and ships are both gorgeous.

The soundtrack, on the other hand, I don’t find that impressive. There are some standout tracks, and at the very least it always properly sets the mood. I didn’t notice an enormous difference in the sound here between the classic soundtracks and the new ones, but that isn’t really a criticism. The work that went into the audio is subtle, meant to preserve the original experience as much as possible. That’s something in and of itself to appreciate.

Now let’s get to the good part where I talk about exactly why this collection enamored me so much. While the bells and whistles of all the gorgeous looks set off my inner love of awesome space battles, the real stars of this remaster are the little tweaks to the gameplay Gearbox made to update these classics for the modern day.

Out with right-click menus that make simple actions harder to perform then they should, and in with a sleek UI that makes orders easy to issue whether you are changing unit strategy, setting up strike groups, or harvesting resources. Out with always needing to summon your movement disk to go anywhere, and in with a simple right click that moves the unit to landmarks in space or brings up the disk to move where you need to at your discretion. Out with the small antiquated notions of old design ideas, and in with the small modern touches that strategy gamers appreciate.

What’s really impressive about this is that the developer managed to institute these things while leaving the most important facets, like three-dimensional movement, completely intact. They have masterfully touched up what didn’t work today, while knowing when to leave parts that work well even now. It shows how strong and ahead of their time the Homeworld games were, that a few simple touches are all that was needed to update the game into something that is easy to appreciate.

You really feel like an interstellar traveler in these well-written campaigns.

Speaking of strong and ahead of their time, Homeworld in my opinion still has yet to be matched in impressive strategy game storytelling today. Original developers Relic really knocked it out of the park, managing to tell an engaging story about a lost people trying to find their old Homeworld in the depths of space. They show a good story doesn’t need especially compelling characters or faces, as with nicely performed voice work, simple ship models moving in the right way, and cinematic cameras utilized in the right fashion, they managed to draw my attention more than most games.

Strong writing isn’t the only part of Homeworld’s story that really puts it arms and shoulders above other strategy titles. It’s the brilliant understanding of how to tell a good story in this format. Homeworld 2, and thus it’s remaster, really prove this point. The writing in Homeworld 2 isn’t quite as good as the first, as it falls on some tired cliches, but it still manages to be engaging by setting the tone properly and using the camera well. No other strategy experience quite manages to capture me this way, but the best thing about it doesn’t even have to do with the writing or storytelling, but it rests in how personal it manages to make the journey feel.

Your resources, research, and ships are persistent as you move across space throughout the campaign. As you keep moving, you’ll build up your own fleet by utilizing resources you need to collect and use the way you want to between missions. This makes you feel like a scavenger, trying to survive in the depths of space by using what you find to build yourself up so that you can become a viable threat to the enemies you face. By the end, even if your experience isn’t entirely unique to you, it always feels like it. It lends a feeling of accomplishment through it’s fantastic sense of progression.

Homeworld also has solid combat. You can use three-dimensional combat to position for the best point of attack, but even if you don’t watching the ships fight with weapons blazing is still entertaining, and commanding them is still just the right amount of challenging. Utilizing the strengths and weaknesses of each ship against other ship types is essential to survival, and composing your fleet to solve the different strategies of your adversaries is compelling because of it.

In Homeworld 2 units are grouped into squadrons.

The gameplay of Homeworld 2 is slightly better than the original even in this collection, as they decided to preserve a lot of the original Homeworld as it was. In Homeworld 2, smaller units like fighters are sorted into squadrons, and building up your mothership feels like a superior experience as you build sub-systems onto it. In the end though, the small differences of each game just serve to each their own unique feeling and either way, the original Homeworld still holds up very well.

I think the best bits of gameplay in Homeworld Remastered result from the great mission design in the campaigns, where you are presented with unique situations and need to solve them using strategy. The puzzles you must solve with a proper approach aren’t always purely adversarial, as there are also environmental challenges for you to overcome. Some of them don’t entirely meet up to the premise given or are difficult to accomplish for the wrong reasons, but they are still vastly entertaining to solve and make for some of the greatest high points of both games in the collection.

I don’t want to pretend that there are no flaws at all, despite how much I love this Collection. Resource Collectors have odd issues where they will stop working even if there are still resources to collect, and waiting for your resources to come in can also be quite boring and slow down the pace in an unnecessary way. Selecting units in groups can be challenging, and tracking down specific ships can be difficult.

Resource Collection can take a lengthy amount of time.

In the end though, everything I can possibly criticize this game for is what I consider to be a nitpick. None of these really small problems hold down the experience, and there are almost too few to mention. Homeworld and Homeworld 2 were both masterpieces when they came out, and that hasn’t changed. Now they are available at a great price, with improvements that make them even more fun to play, and whether you are a die-hard fan or just someone that wants to check out what I consider to be the epitome of strategy game design, the Homeworld Remastered Collection won’t even come close to leaving you disappointed.

Gearbox have created an amazing Remaster here. Other developers are content just to update the aspect ratio to HD and call it a day, but Gearbox goes above and beyond here. The graphics and gameplay improvements make Homeworld into a modern game, and they still preserve the reason that the Homeworld games were so fantastic to begin with. It’s obvious that a lot of work went into this Collection, and as a fan of the original games, I can’t give enough praise for how much I appreciate that.

Unfortunately, the multiplayer is still in beta. I’ll update this review with impressions on it once it’s out of beta, as it is the game is this good with or without the multiplayer component.

Gearbox has set the bar for how to update an old game for a modern audience. The slick new UI, the minor control improvements, and the updated graphics make these two strategy masterpieces into an experience even greater than the originals.

My name is Niko, I'm currently 20 years old. I spend most of my time on my computer gaming as I got hooked on videos games from a young age. While my first experience with video games was with the Gameboy Color, I first got seriously into games while using the original Dreamcast and the PlayStation 1. I played many games back then, but the highlights were definitely Pitfall 3D, Pokemon Blue, Rayman 2, and Ecco the Dolphin Defender of the Future. All games that I spent many many hours on and filled the long hours where I stayed at home mostly by myself thanks to living in unsavory neighborhoods. From then on, I pursued a lot of video game consoles. I was particularly enthralled with the Super Nintendo and Nintendo 64. As I grew up further, my tastes shifted and I tried more and more games, especially after I got a PC. My first experience with a PC RPG was Star Wars Knights of the Old Republic, and it was really the game that made games an integral part of my life. I played video games a lot back then, but ever since playing KOTOR I've been a lot more opinionated and interested in games. I even entertained the idea of wanting to be a developer at multiple points, but I just didn't have the skillset. Still, KOTOR ignited my interest in video games as a way of telling stories. I loved the ways video games could tell such large and complex stories, combining the best parts of every other medium of entertainment with the unique pieces of what video games themselves offered. Now, my favorite genre is definitely RPG's. With my primary interest being the story driven ones. Though, I still enjoy my occasional shooter and action titles I enjoy mostly great cinematic titles with good stories. Though I also enjoy the Stealth, Strategy, and Action-Adventure genres quite a bit. I also think that the PC is a wildly superior platform to any console, due to the wide variety of options. Whether it be in graphics, mods, or the selection of games themselves.
Related Articles: Homeworld Remastered Collection
Share
Tweet
Share
Submit