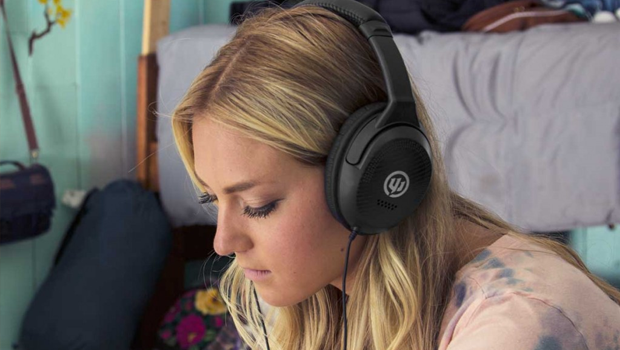 I so often find myself utilizing less­ than ­ideal mechanisms for the enjoyment of music and game audio (my buzzing car stereo, rattling TV speakers, or the tinny whistles of my smartphone), so Wicked Audio’s Reverb Headphones appeared as nothing short of a godsend for my ears that hungered for sweet and exquisite sound. I’ve gone for them at every opportunity, plugging them into various devices as I embark on a quest to reexamine all things that are good to the earhole, the fruits of which I’ve savored in blissful splendor.

With these headphones, the potential for music enjoyment is profound. With 40mm speakers acting as an arc to uncharted realms of resonance, each subtle nuance triumphantly protruding from the french horn of Tchaikovsky’s fifth symphony lands inside the soul with the warmth of a fond Christmas memory. Likewise, the soul of Miles Davis comes alive in spastic bursts of hot and cold. Any and all sub­genres of electronic music, from drum and bass to dark ambient, are brought to the height of their potential through the high fidelity and enhanced bass that this company prides itself on as a primary dividing force between Wicked’s headphones and other competing products. Even the mad, cacophonous compositions from bands like the Residents and Ostrich von Nipple start to make perfect sense when heard through this hardware. If you love heavy bass, look no further: this is like having sub­woofers attached to your ears. If mid and high range sounds are what you’re searching for, these may not be the headphones for you, since both seem oftentimes undermined by tremendous bass rumbles (my one and only complaint about the near-­immaculate sounds I’ve fancied).

Though lacking a microphone, thus making verbal interaction during online gameplay require an external mic, these headphones are perfect for immersing oneself entirely into a single­-player campaign. The ceaseless gunfire and explosions of action games gave me an adrenaline rush that left me with fists clenched once I let go of mouse and keyboard, while the creaking floorboards, howling winds, guttural moans, and other ambient noises in horror games put me on edge, becoming so painfully real as to raise the hair on my neck and make me shiver in absolute terror. I devoured the soundtracks and scores of various games. I felt the epic might of Talion in Shadow of Mordor as I slashed my way through a fortress to the thunder of low brass and the screams and squeals of each dying Uruk-hai. I grooved to the savory Latin rhythms of Tropico 5 despite the blasting of rebel forces that were massacring my feeble army. I even found myself jamming out to even the cheesiest of 8-­bit platformer tunes.

The incredible sound quality of Wicked Audio’s Reverb Headphones is delivered through soft and snug adjustable earphones, and the padding on the connecting headband is a nice touch in terms of comfort. The included extension cord allows for some maneuverability, so you’re not forced to be only a few inches from your monitor, amp, or smartphone. While wearing these earpieces for multiple hours has resulted in a mild, aching discomfort to my ears, the overall feel is exceptionally comfortable. Unfortunately, if you are tough on hardware, it would be wise to find a much more durable product, as the plastic linking the earpieces together is exceedingly flimsy. I had to hold my breath when adjusting the plastic slides on each side for fear that a piece of this fragile device might suddenly snap.

While the headphones are miraculously lightweight (7.2 ounces), one must consider the sacrifice that must be made in terms of durability in order for this to be achieved. The attached cord and the extension cord are both dangerously thin and thus easily damaged: one hard tug could result in a short in one or both of the earpieces. The box advertises these headphones as a solution to “practicing in your parents’ garage…without the cops showing up from an anonymous call,” and one can only speculate that the light plastic and wiring is a direct result of adolescents searching for a cheap answer to their parents’ noise complaints, or, alternately, parents answering said complaints themselves. Indeed, perhaps the most valuable asset to this product is the lifetime warranty. These are perfect as a gift for a relative, but not for an audiophile looking for hardware that will endure years of wear and tear.

Surprisingly, a high quality, gold­-plated jack adapter is included, which I connected to a MicroKorg XL. I was subsequently lost in a vast world of delicately constructed soundscapes. Indeed, the jack included is perfect for aspiring musicians who want to play solo without disrupting their neighbors. However, it is important to note that though the noise isolating earphones do an outstanding job of keeping extraneous sounds out of the listener’s ears, the sounds coming out of the headphones still manage to leak out when the volume is turned up high. Sure, the neighbors won’t call the cops, but you’re still likely to piss off your roommate if he or she is sitting right next to you trying to study while you’re laying down a funky riff. In all, these headphones deliver one hell of a bang for such a minimal dispersal of buckage, but if you’re looking for something that will stand the test of time, you might want to go for something with a more durable wire that can survive being accidentally sat on or yanked from a computer.

Wicked Audio’s Reverb Headphones deliver bass notes that you can feel all the way to your toes, but the actual construction of the headphones may not be able to withstand anything other than sedentary use. As long as you’re careful with them, the Reverb headphones will deliver a high fidelity sound experience to the casual user.

Spencer Campbell has summited many mountains just to shout, “Video games are for nerds!!” After extensive scientific testing, he has concluded that they are. He plans on accepting his Nobel Prize as soon as the dorks in Sweden return his calls.
Related Articles: Reverb Headphones
Share
Tweet
Share
Submit