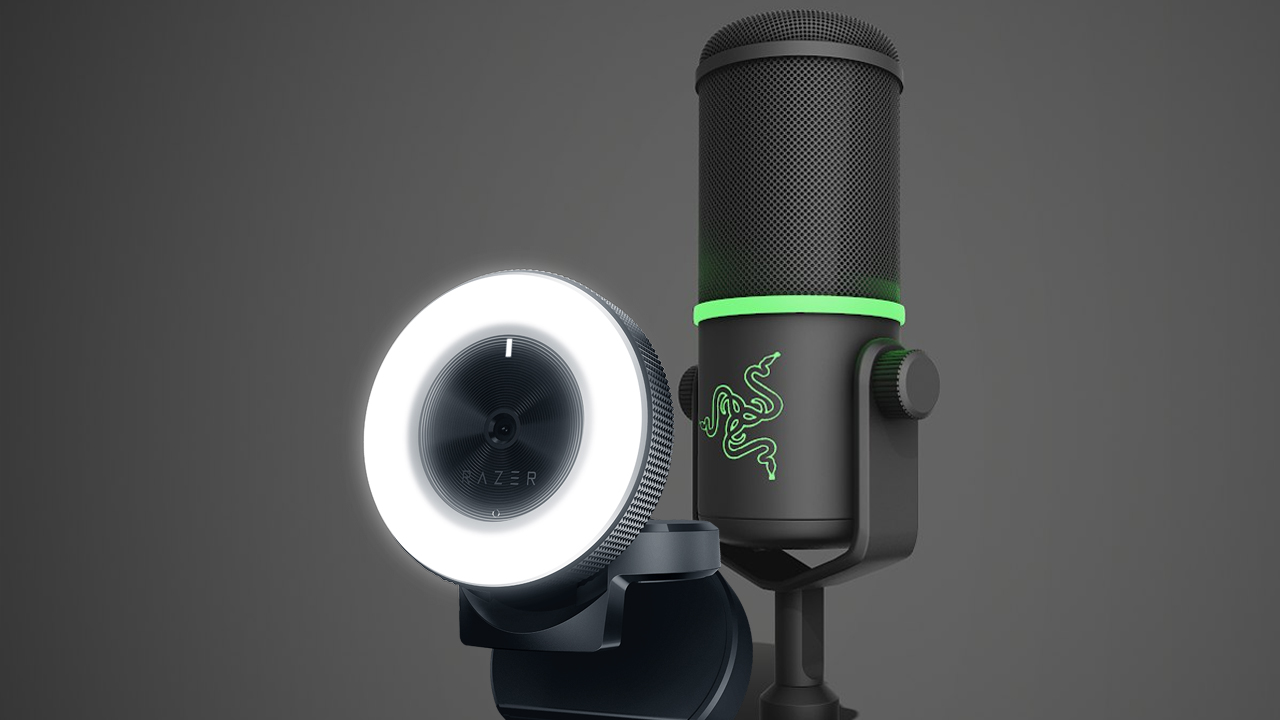 I’m sitting at an overpriced crab boil place as multiple TVs blare from every wall when I realize that we’ve reached a level of parity — on half of the TVs is some sportsball thing, and the other half are broadcasting the Apex Legends World Championships. Amazingly, this isn’t happening in some place like Los Angeles, it’s happening in football country Fort Worth, Texas. What I’m saying is that streaming is finally starting to hit the mainstream.

Gaming Trend has been dabbling in this space, and I knew it was time to take it seriously, and for that I’d need high-quality gear. Razer, makers of high end laptops (our review of the Razer Blade 15 laptop), phones (our review of the Razer Phone 2), routers (We check out the Sila here), and a plethora of mice, keyboards, and headsets, have decided to take a swipe at these peripherals as well. While it’s easy to buy a camera and microphone, Amazon has loads of them at every price range, getting one that can meet the needs of streamers is an entirely different matter. For reasons you’ll see in the review, I consider the Razer Kiyo and Seirēn Elite to be a matched pair, so I’ll be reviewing them together.

While Razer has a trio of software packages (Synapse, Chroma, Cortex), you won’t actually need any of them for the Kiyo. The device is entirely plug and play, integrating nicely with Windows 10 and exposing functionality to zoom, focus, change exposure, aperture, pan, tilt, roll, and enable low light compensation in camera control without outside software. Better still, it’s practically instant-on and ready to go when you are.

All of this hardware in the world means little to streamers if it doesn’t integrate with software. The Kiyo integrates seamlessly with Open Broadcast Studio (OBS) and XSplit. Adding it into OBS was as simple as right clicking on the source panel, selecting “add video capture device”, and I was off to the races.

In terms of camera quality, the Kiyo sports a 4 megapixel lens capable of streaming at 30fps at 1080p, or 720p at 60fps. The 1080p settings are more than enough for any full-screen activities, whereas the 720p at 60fps is great for picture-in-picture action during a stream.

One of the most frustrating aspects of streaming has to be proper lighting. Either you end up with entirely too much illumination, washing your face out, or entirely too little, leaving you looking like you are streaming from a cave. The Kiyo sports an integrated and adjustable light ring that frames your face in a way that looks natural and doesn’t simply bathe the entire space. There’s a reason why makeup artists and interview lighting is most often a ring.

The ring lighting and small size of the Kiyo does convey a secondary benefit. If you head to events, whether it’s streaming from QuakeCon (or DoomCon as it’s being called this year), jumping online from a laptop at a friend’s house, or streaming on the go, the Kiyo provides nearly everything you need to run a quality stream without the hassle of setting up big lighting rigs and tripods. 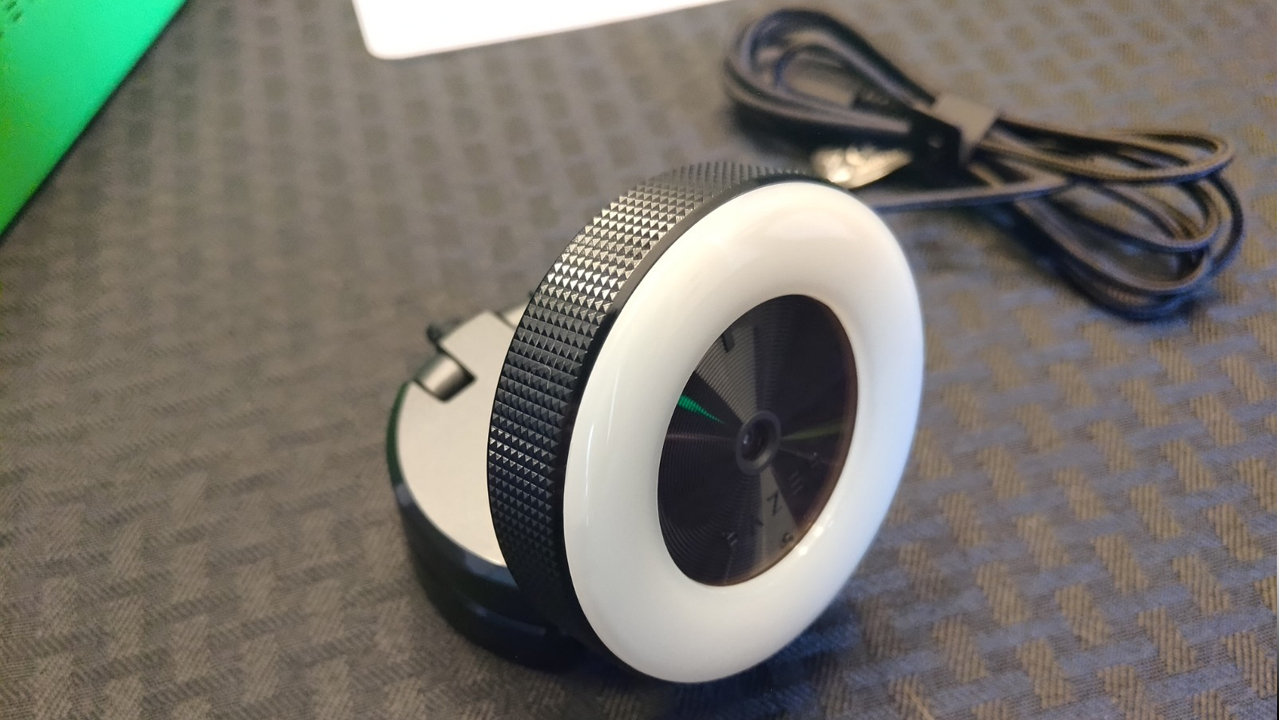 The integrated light can be adjusted up or down with a twist.

There are a handful of issues with the Kiyo, but thankfully all of them are minor. First, the cord is entirely too short, leaving me to need a USB extender to have it reach my USB hub. Second, there is a little bit of background noise with the Kiyo, but if you are using a green screen this is a non-issue — it’s so minor that you are unlikely to notice it unless you are looking for it. Lastly, if I had one major complaint with the Kiyo, it’s the poor audio pickup. Even at a distance from the desktop to my face, using the Kiyo alone I often heard that I sounded “too quiet” or that I was “in a tunnel”. Given the $100 price tag of the Kiyo, I can’t say I expected it to have amazing audio capture — that’s the Seirēn’s job.

First and foremost, there are two Seirēn variants — the Seirēn X and the Seirēn Elite, of which I picked up the latter. Before we get into the specifics of the Elite, let’s get some terms straight.

The Seirēn Elite is a single dynamic capsule, utilizing a high-pass filter, a digital/analog limiter, and using a supercardioid pickup pattern. For most people, none of those buzzwords mean a thing, so let’s break each down and see what’s important, starting with “single dynamic capsule”.

A dynamic capsule has to do with the type of transducer (how audio is picked up and translated from a sound wave into a digital signal) inside the body of the microphone. This transducer is then wrapped with a small coil of wire that vibrates within a magnetic field. The waves in this field create the electrical signal that your PC will translate into the sound your listeners will hear. This design makes it robust and able to handle high sound levels, and are generally immune to environmentals like temperature and humidity (versus a far more complex condenser mic which are more sensitive, but can suffer all sorts of failures in anything but the most neutral of settings). Translating this into something useful — this microphone isn’t going to have any problem with capturing natural speech, or the most obnoxious shoutcasted stream. 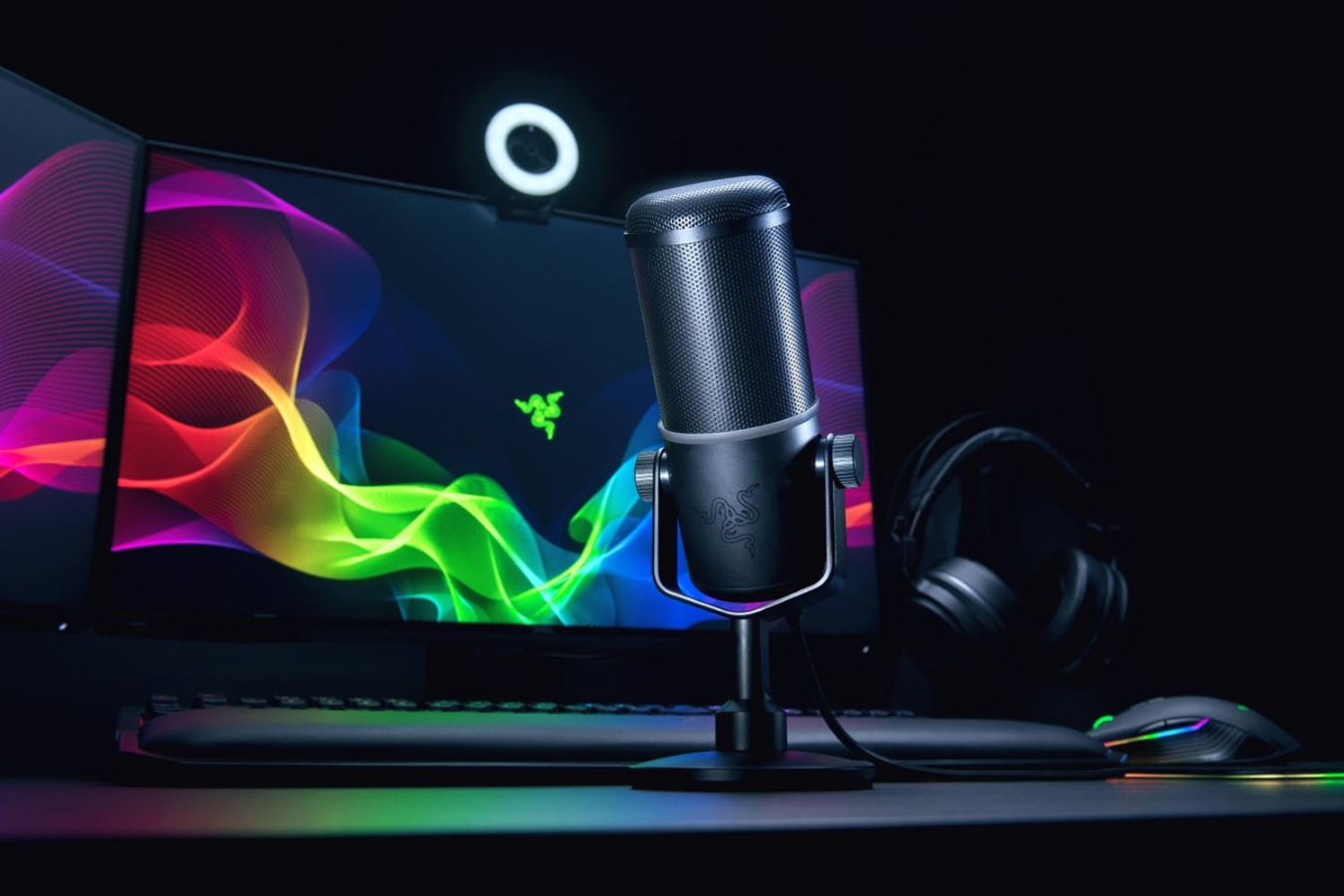 Moving on to high-pass filter, it’s a far simpler explanation than dynamic capsule. A high-pass filter simply removes (or at least dampens) sounds at the lower end of the audible spectrum. If you’ve ever listened to a streamer constantly rolling around in their chair, an air conditioner or heater kicking on, thumping their feet on their desk, or making other fidgety noises, you fully understand why a microphone with a high-pass filter is necessary.

Digital / analog limiters are deeply tied to a concept called “clipping”. When you overload a microphone with a loud noise, you can sometimes lose audio completely, “clipping” the signal as the microphone protects itself. By using a digital / analog limiter, instead of clipping, the microphone will instead use a diode (usually) to dampen the volume a bit, allowing it to be loud, but not overwhelming to the device. It’s more professional to have a loud moment than audio cutting out, so this is perfect for those celebratory moments on your stream.

The final buzzword on the packaging is supercardioid pickup. While it sounds like a Dragonball Z character, it’s in fact a reference to how audio is directionally captured. An omnidirectional microphone would pick up audio in all directions, whereas a cardioid microphone will capture in a heart-shaped pattern (a cardioid) from the front, while rejecting sound from all other directions. A super-cardioid pattern picks up with a slightly larger capture from the front and a larger block in the rear. You can get a visual representation of this in the picture below, but suffice it to say that this microphone is meant to capture one or even several people from the front, but without capturing audio from behind it. I’ve used this in practice by having my speakers running behind the microphone, but my teammates couldn’t hear the action. This negated the need for a headset completely.

Ok, now that we’ve unpacked the terminology, let’s unpack the box! The Seirēn Elite is in the box, naturally, pre-set on an adjustable weighted base desk stand to keep it safe and sound. The stand itself is steel with a soft rubberized base to prevent it from moving around, as well as additionally muffling any sounds that might reverberate through your desk. Courtesy of the two hand-adjustable oversized screws on the sides, the Seirēn Elite can be removed and placed into a standard cage with an integrated pop-screen (e.g. this one on Amazon). Beyond the microphone and stand, there is an included windscreen, as well as an included USB cable. In direct contrast to the Kiyo, the Seirēn Elite has a long braided cable cord (nearly 10 feet long – 3 meters for you metric system types), which is handy for placing it precisely where it’ll do its job best. 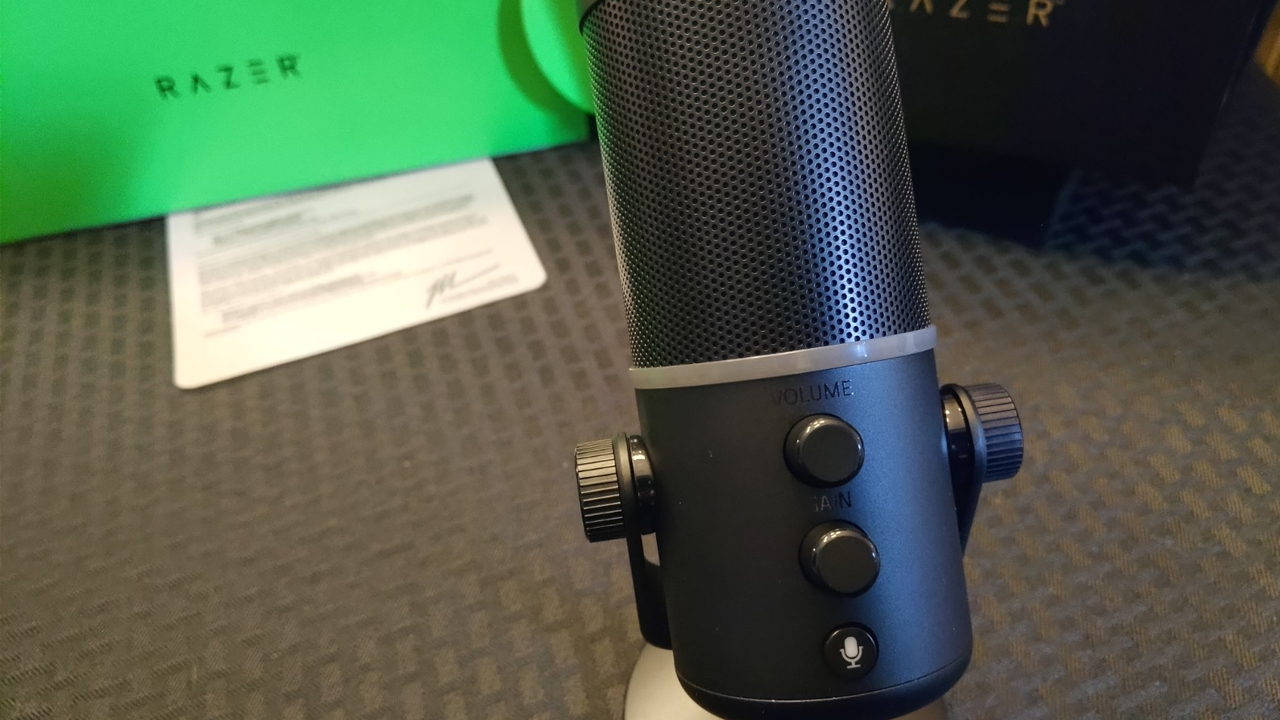 The Seirēn Elite has physical switches for all the things you’d normally tinker with in software.

On the body of the Seirēn are a few features that make this microphone more convenient than many others I’ve sampled. Physical volume and gain adjustments sit above a mute toggle, and located on the bottom is a button to turn on the high-pass filter. These are handy so you can make adjustments to your input and filters without having to alt-tab from your stream to change settings. Encircling the center of the microphone is an LED indicator ring that glows red when your microphone is running too hot (or in my case, I’ve jostled something on my desk too loudly), letting you visually know that you might want to turn down your gain. A quick tap of the high-pass filter button and I saw this light a lot less often. It’s a nice touch that lets you avail yourself of those physical buttons once again.

The ultimate test for the Kiyo and Seirēn Elite was using the microphone instead of a headset mic for streaming. Freeing myself from a headset meant that the Kiyo would do the heavy lifting for video, but muting it for audio, with the Seirēn Elite handling audio capture, but also needing to filter out anything but my voice. Rather than describing the combined results, why not hear and see them for yourself? You can check it out on our recent foray into our Overwatch Scrub League adventures.

If I had a complaint, it’d only be the pricetag – quality comes at a price. The Kiyo’s normal retail price is $99.99, and the Seirēn Elite’s MSRP is $199.99. I’ve found the Kiyo for $80, and the Seirēn for $10 off, but the price tag is still a little steep. That said, having gone through a lot of microphones and cameras that were “just ok”, I’d have rather had these options available and saved me the aggravation and sunk cost.

The Kiyo and Seirēn Elite are an incredible combination. The Kiyo’s camera and integral light makes framing a breeze, and the Seirēn Elite captures your voice with crisp clarity. If you want to jump past all of the entry level streaming gear and right to the very best, look no further. It’ll cost you a little bit, but you won’t have to buy it twice.