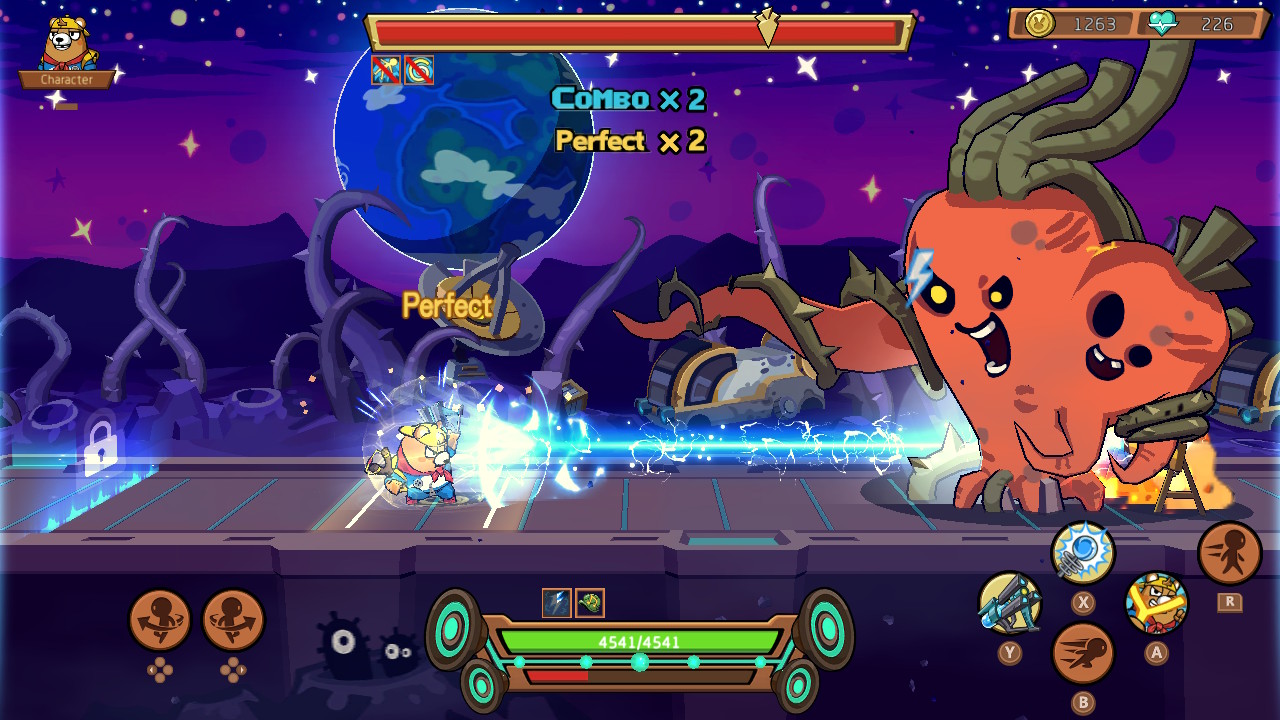 With Hades and Dead Cells tearing up the indie sales charts, roguelikes have been in vogue for quite a while. There are some wonderful entries to this expansive genre, and while it’s starting to get a bit bloated, there are still a variety of titles that scratch that RNG itch just right. Enter Rhythm Fighter, which I can only describe as Crypt of the Necrodancer but with adorable animals you control. Part rhythm-roguelike, part platformer, the game is a unique take on the roguelike formula that had me grinning from ear to ear. 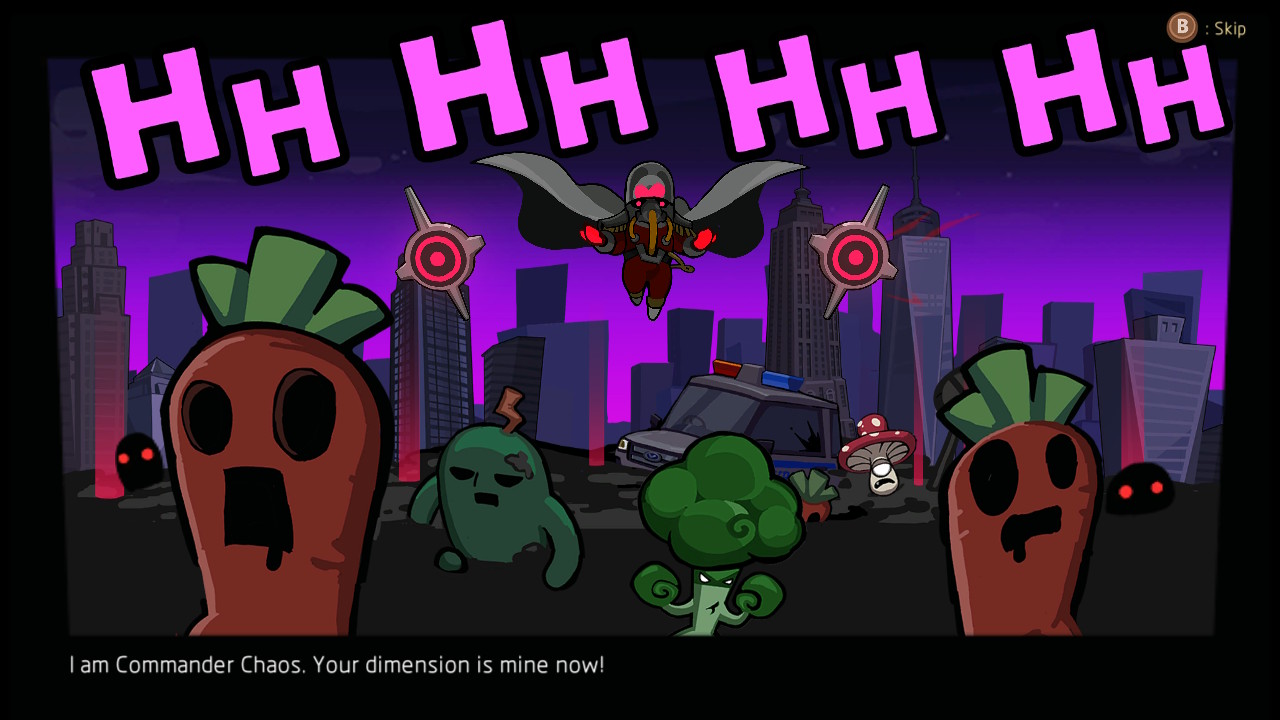 In Rhythm Fighter, you play as one of a variety of animals trying to stop the evil Commander Chaos from ruling the world! The Commander can turn vegetables sentient (and evil!) and it’s your job to travel across five stages in order to thwart the dastardly villain and bring peace back. You do this by equipping a host of primary and secondary weapons, enhancements known as beat cards, and other items.

As aforementioned, the game operates like Crypt of the Necrodancer, as you and your enemies are controlled by the beat of the background music. You’ll need to time your actions while also making sure you’re not in harm’s way. An action usually takes one beat to complete, but messing up will make an attack weaker or not execute at all. The game takes place on a 2D plane, and you can either jump or dodge in time with the music. While most of the system takes some time to get used to it, the control scheme is something that works well from the get-go.I wasn’t expecting to do complex combos, but after a while I was beating vegetables like nobody’s business. You have two control schemes, and I chose the “standard” easier controls; there’s one that’s a little more precise that has a “difficult but awesome” approach.

The soundtrack is the best quality of Rhythm Fighter, as it has a distinct EDM flavor to the whole experience. Even though the game suffers from a repetitive gameplay loop that’s rife in the roguelike genre, there’s no doubt that the music in each stage had me coming back for more. The soundtrack also helps you navigate through enemies, and it’s helpful to get a few failed runs in so you can get used to the tempo and beat tracking. 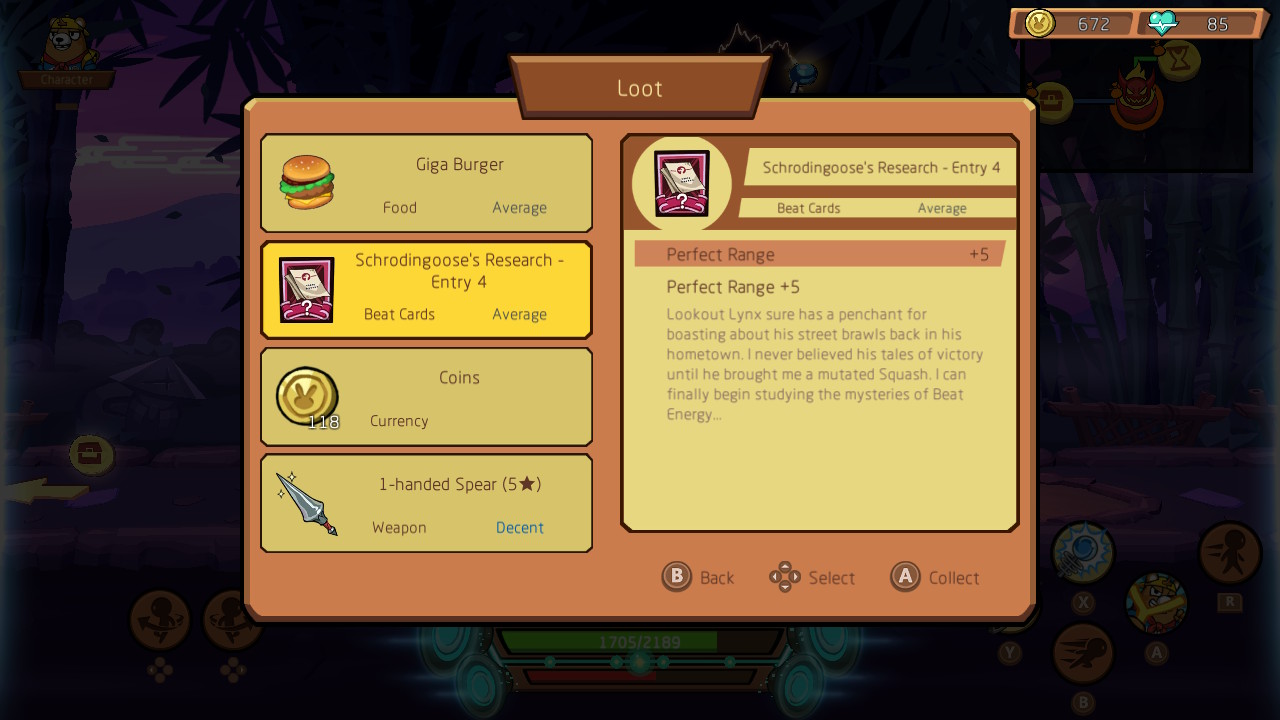 In addition, you have different abilities at your disposal. While your primary weapon can usually come out on every beat (unless it has a projectile), you also have tactical items that act as a secondary weapon and have a cooldown. You also have character-specific abilities, like DJ Daxx who is a doggie disc jockey that can damage enemies on both sides of the field with his earphones. He also has a passive effect that increases damage output when an action is timed perfectly. Playing through the game and unlocking achievements (like reaching a certain stage or killing an amount of specific enemy) will allow you to play as other characters. My personal favorite is Kid Cubbs, a literal cub scout that has a slingshot and decreased cooldown.

Like many roguelikes, Rhythm Fighter has a great variety of items that suit many different playstyles. I’m personally a safe zoning type, so I prefer the electric gun that shoots out electric bolts and beat cards that increase health recovery. There are also different mechanics that are more in line with the random nature of the genre, such as a wishing well which will grant you a random special ability should you donate coins into it. You’ll need to be careful though because these abilities can harm as much as help (such as granting you more lenient perfect timing while also causing the screen to shake). Mix this with the rhythmic qualities of the game and you have a rocking good time ahead. 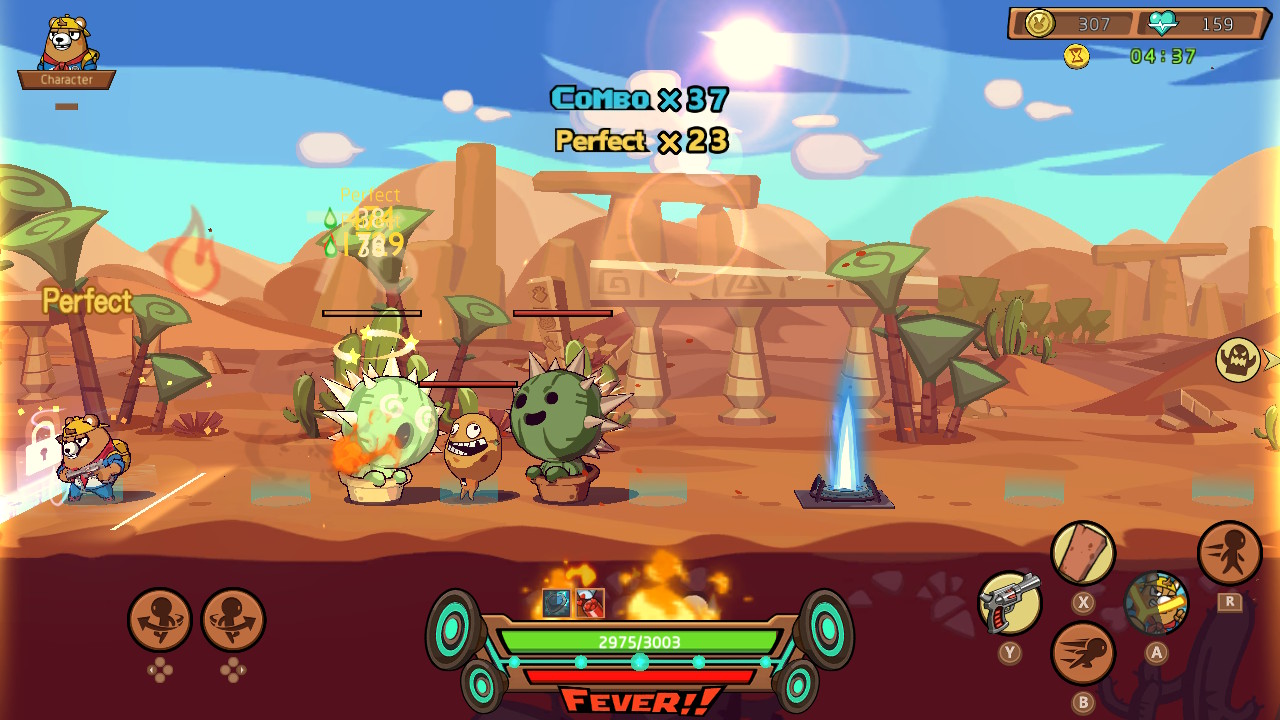 There are also in-game stores to purchase items. You can also try to fight the regular shopkeeper, but try not to do that often (then again, the possibility of free stuff after winning is always nice). While you have in-game coins that are discarded after you lose a run, there’s beat power that you can use to unlock permanent upgrades that you can use in future runs. It’s a progression system used by modern roguelikes. As someone who isn’t great at the genre, I love how even my worst deaths can result in some meaningful change.

The biggest thing that separates Rhythm Fighter from its competition is through its map system. Each time you play, the stage order and map layouts are randomized, though the last stage is the same each time. This means you’ll need to familiarize yourself with the bosses since encountering a boss later in your run means you’ll fight an upgraded version. You have icons with branching paths that denote what obstacle or shop you’ll encounter, from regular battles to a gacha machine. By flying through the boss and beating it in a certain amount of time you’ll unlock the speed zone, which will grant you additional bonuses. However, at any time you aren’t attacking baddies, you can choose to fast travel to any discovered part of the level’s map to go back and discover the routes you may have missed. I think this is a great way to backtrack and recoup, as this means you can save recovery items or breather rooms for after you beat a boss and need to recharge for the next stage. 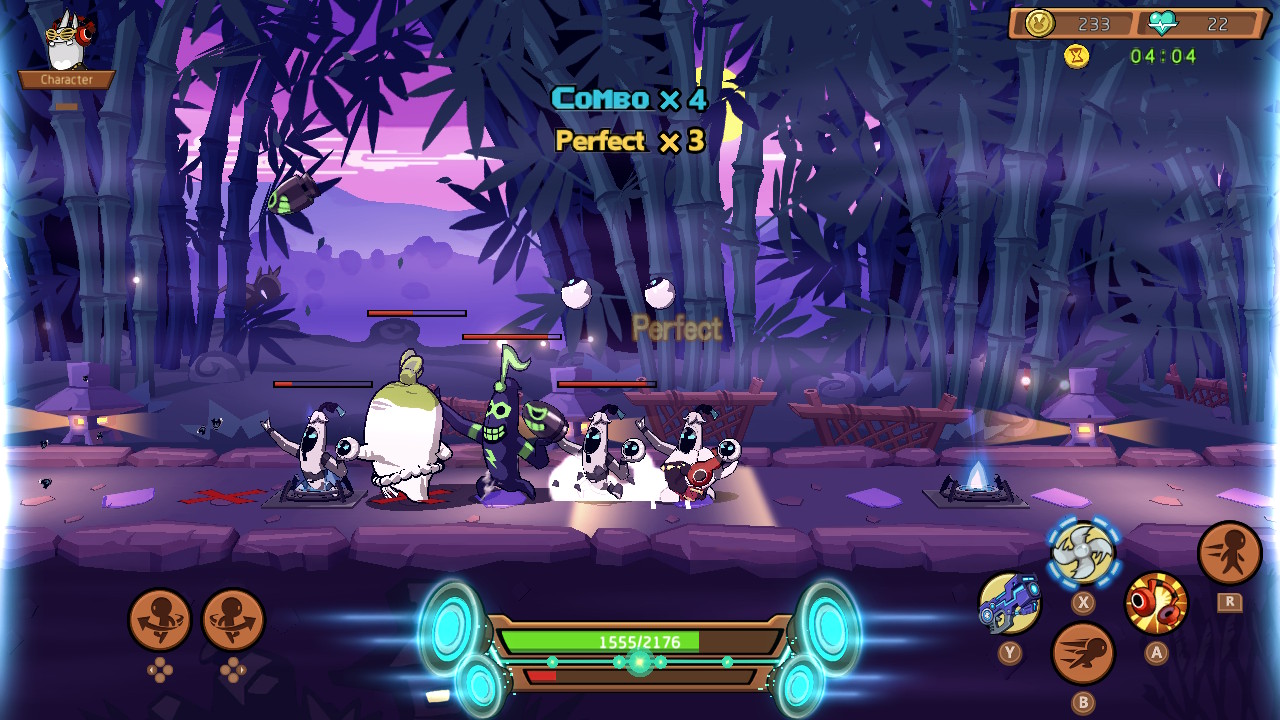 And let me tell you, it gets tough after the second stage of a run. You’ll need to experiment with your equipment and find a groove that works for you, because the bosses you fight in the third and fourth stages are upgraded in difficulty and damage output. The annoying sumo Yokotaro fought in a Temple stage? Yeah, that boss gets tougher. While I appreciate the crushing difficulty later in the game, it’s unfortunate that Rhythm Fighter equates “harder” with “more damage and cheap attacks”. It got to the point where if I ended up getting the Chonki boss (a literal chonky statue of a cat) after my second stage, I ended up resetting my run due to the fact that the boss’s move patterns are unpredictable and there’s barely an opening to hit back. 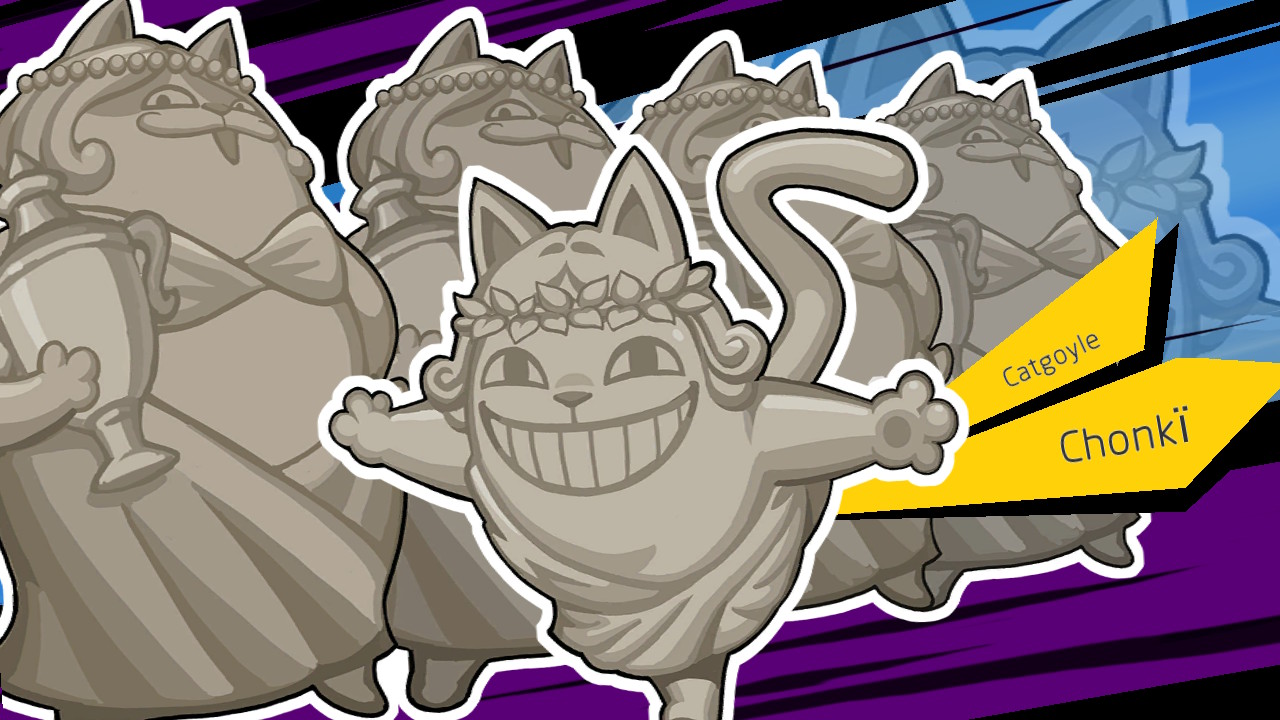 Well, at least the boss lives up to its name.

Rhythm Fighter is a wacky musical time for roguelike fans. With an amazing EDM-infused soundtrack and innovative gameplay, you should definitely download this delightful game.

Elisha Deogracias is an aspiring accountant by day, freelance writer by night. Before writing for Gaming Trend, he had a small gig on the now defunct Examiner. When not being a third wheel with his best friends on dates or yearning for some closure on Pushing Daisies, he's busy catching up on shonen manga and wacky rhythm games. Mains R.O.B. in Smash. Still doesn't know if he's a kid or a squid.
Related Articles: Indies, Rhythm Fighter
Share
Tweet
Share
Submit