The quest to unify China was a long and arduous one during the Three Kingdoms period. Mighty warriors such as Cao Cao, Liu Bei, Dong Zhuo, and many more fought for control. Some had noble intentions, while others were greedy and corrupt. In the base game of Total War: Three Kingdoms, you may have already accomplished this task, perhaps multiple times. Now’s your chance to go back to the time leading up to the Yellow Turban Rebellion instead of just dealing with the consequences. Two of the biggest draws are the chance to play as Emperor Liu Hong attempting to save a collapsing empire or as the Zhang brothers leading the Yellow Turban Rebellion. These two new campaigns, along with a few other aspects make for interesting additions to the Three Kingdoms story.

The story for this DLC takes place prior to the events of the main game, starting in the year 182 CE. The best additions that the DLC brings are the Emperor and Yellow Turban campaigns. These two options are the opposing sides of the Yellow Turban Rebellion. You can take on the role of Emperor Liu Hong in an effort to save your empire. Due to a combination of poor leadership, bureaucratic corruption, and the ever-increasing suffering of the people, the Han Empire is breaking at the seams and is on the verge of collapsing. As Liu Hong, you start with an incredibly powerful army, a massive collection of gold, unique political influence, and a fair amount of allies. The downside is that you face decreasing levels of support, dramatic expense costs, and the rising rebellion as each turn passes. Your goal is to manage your expenses and food supplies, increase the happiness of the people, and deal with any groups that the rebels turn against you. If you don’t take care of these concerns, then it’ll only be a matter of time before the empire falls. 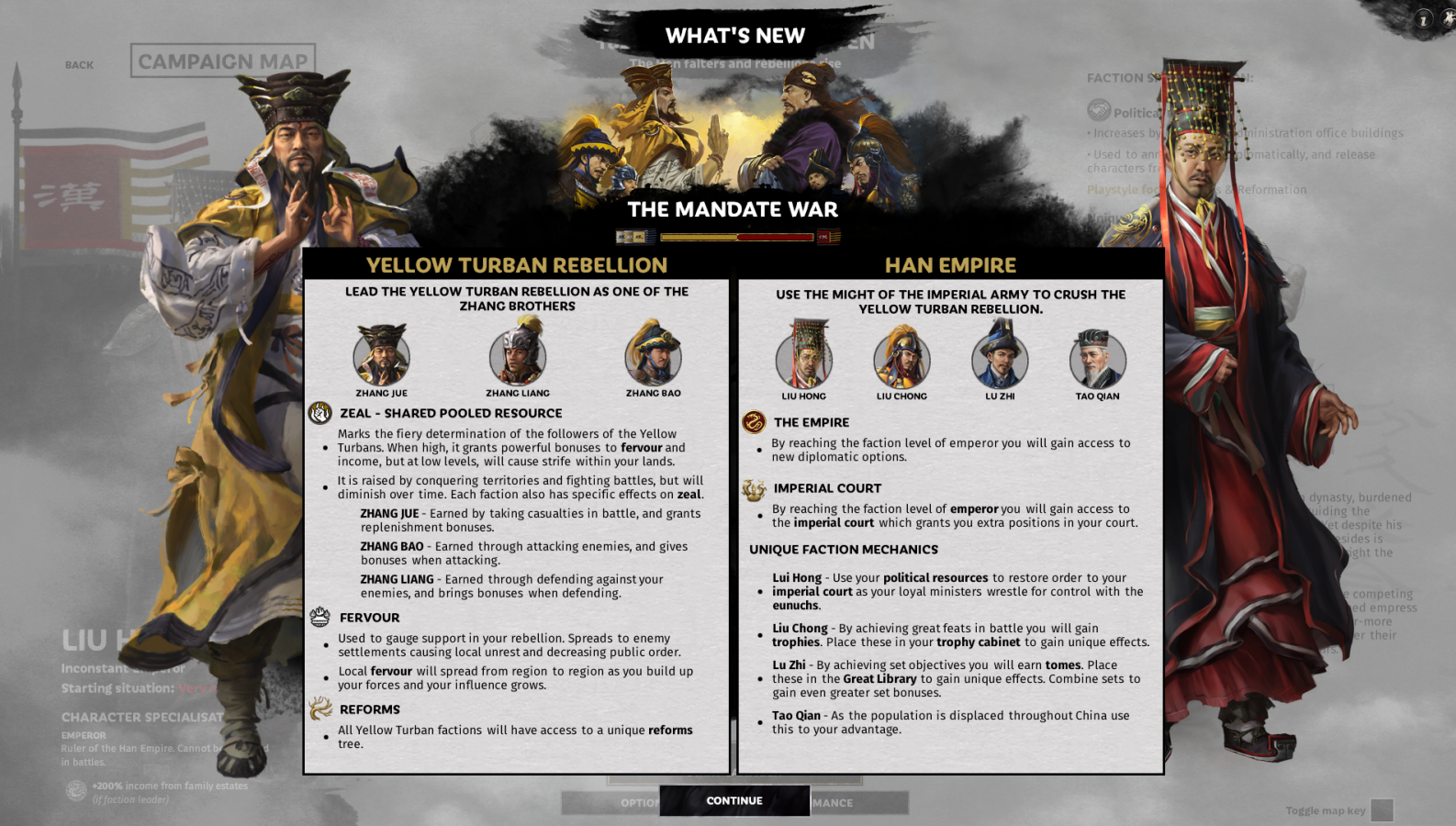 The Han Empire is not without friends in high places, however; you also have loyal companions like Liu Chong, Lu Zhi, and Tao Qian. Some of the unique features of the Han Empire include extra diplomatic options, additional positions in your court, as well as special faction mechanics. Diplomatic options such as expelling factions from the empire are extreme, but it’s your power to use. As for mechanics, Liu Hong has political resources that help restore order to the imperial court, Liu Chong can earn trophies in battle that offer unique effects, Lu Zhi can earn tomes that grant special effects, and Tao Qian helps control a displaced population.

Controlling the Han Empire is an interesting point of view compared to the other warlords from the base game. Starting with a ton of resources that drastically dwindle presents an immediate challenge. You start off in a very difficult situation, so don’t expect a walk in the park. As turns pass, the Yellow Turbans begin to rise and spread their influence. They do whatever is necessary to grow in power and stand against you, so you have to try and crush them before it’s too late. You will have a great deal more allies than them at first, but that’s bound to change as unrest and suffering continues. In my opinion, this was the hardest campaign to play. That being said, I’m not exactly great at these types of games. Longtime fans of the series may have much better luck than me. 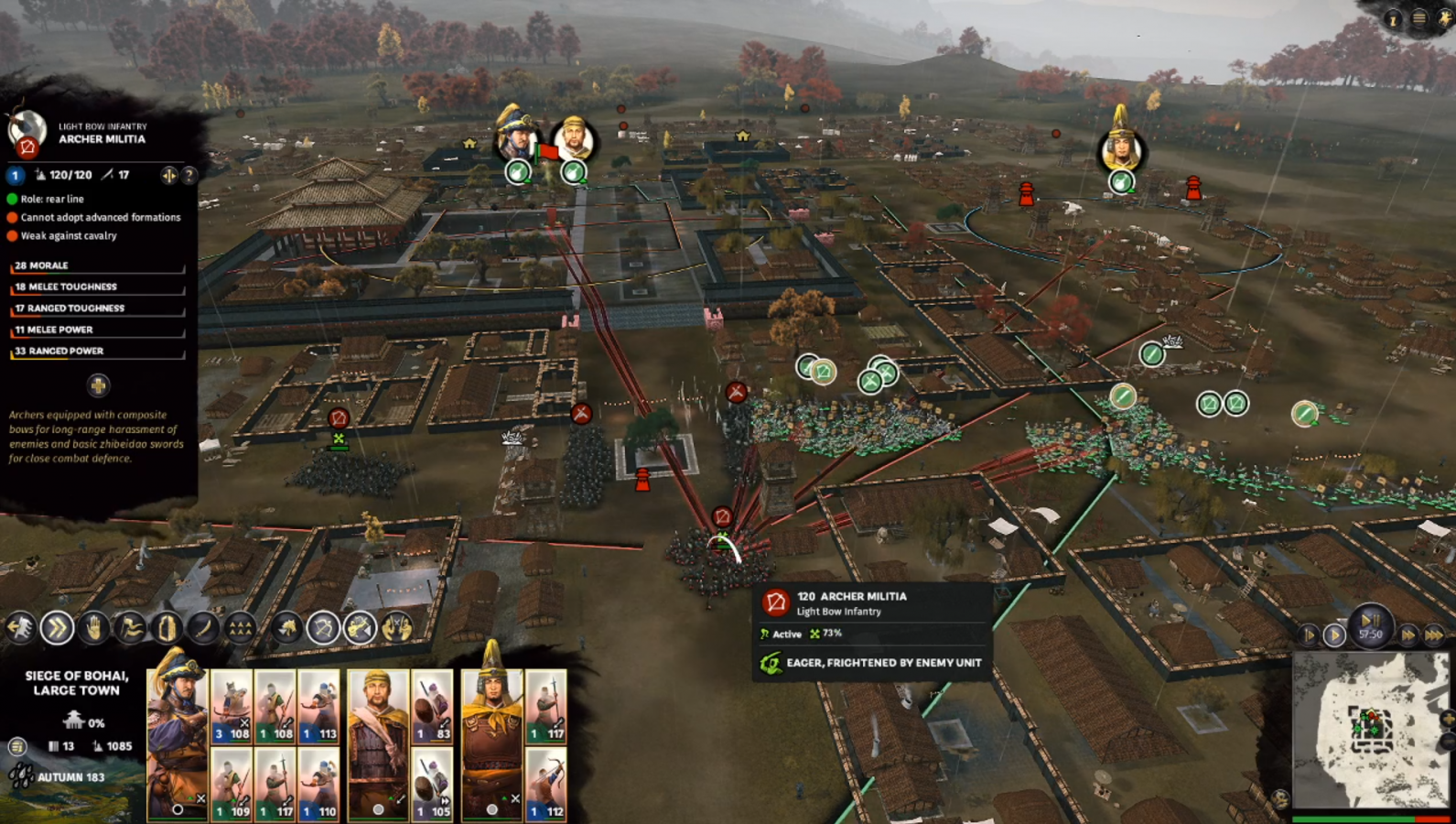 If you want to try your hand at taking down the empire, then you can play as one of the Zhang brothers furthering the Yellow Turban Rebellion. In an appropriate reversal, the Zhang brothers, Zhang Jue, Zhang Liang, and Zhang Bao, start much differently than the Han Empire. Your gold collection is much lower, but you thankfully don’t have expenses bleeding you dry. You start relatively small, but you’re still powerful enough to take control of areas near you. This is the first step in becoming a force that can threaten the empire. Your goal is to build up your forces, spark rebellion, and cause the Han Empire to crumble. It won’t be an easy task, but it’s for the sake of the people. You believe that you are the saviors of China and wish to end the suffering of the unfortunate, by any means necessary.

The three biggest differences for the Zhang brothers are the inclusion of features such as zeal, fervour, and a unique reform tree. Zeal is representative of your fighters’ resolve; you raise it by fighting and taking over territories. It lowers as time passes, so make sure to keep the fight going before your soldiers lose their will to fight. Each brother has their own bonuses earned from zeal: Zhang Jue grants replenishment bonuses from taking casualties, Zhang Bao grants bonuses when attacking, and Zhang Liang grants bonuses when defending. In a sense, all of your bases are covered as a result of the brothers. Fervour represents the support of the people. Disrupting the public order and inspiring the people to believe in your cause helps raise it. Conquering territories and growing in power are the best ways to accomplish this. As for reforms. you have access to a reforms tree that is unlike any other warlord’s. Use this special collection of options to your advantage in your quest to take down the empire. That being said, I found this campaign more enjoyable than the Han Empire side of things. 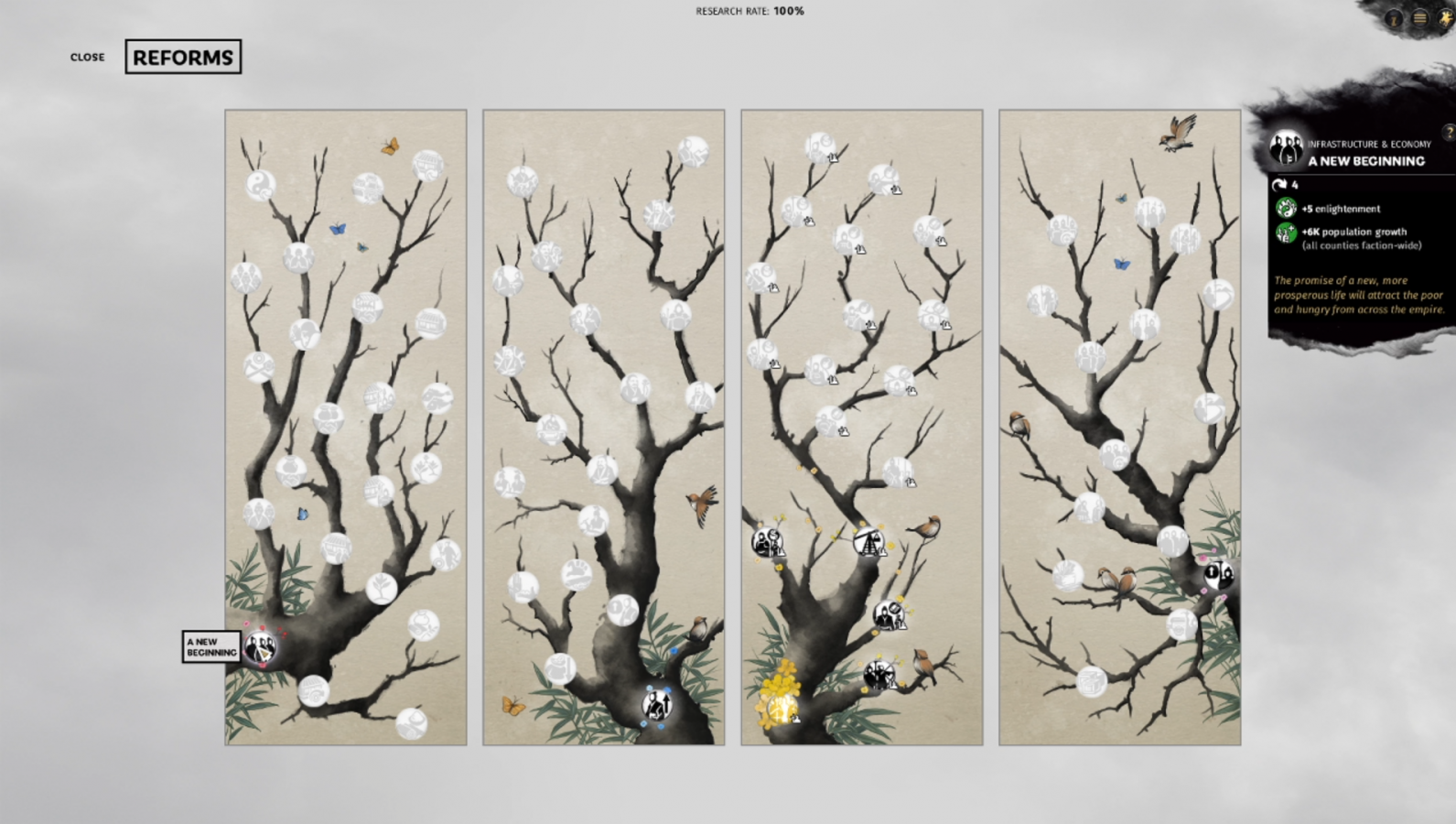 Mandate of Heaven offers more than just the aforementioned factions during the Yellow Turban Rebellion. You even have the option to play as one of the familiar warlords from the base game during this time. Not only that, but you can extend your playthrough from the Mandate of Heaven events into the base game. Want to try Cao Cao’s story again, but this time build up his forces as the Yellow Turbans are on the rise? Go for it, now’s your chance. Before wrapping up, I’d like to mention that I played in Romance mode during my time with the DLC.

All of that being said, I’d say controlling the Yellow Turban Rebellion is the most interesting and enjoyable part of this DLC. It was cool getting a chance to not only be a part of the events that led into the base game, but actually be responsible for them. On the flipside, fighting to hold your empire together as Liu Hong was an unexpected change of pace, which I’m sure some players will enjoy. It’s not necessarily bad, but it took much more skill than I have to successfully get through. Gameplay, visuals, and other core aspects of Total War: Three Kingdoms didn’t get any better or worse as a result of the Mandate of Heaven DLC. If anything, it just added more characters and content for players to try their hand at. If you’re a huge fan of the game and want more reasons to keep playing, then the price tag isn’t too much to shell out. Just remember, the new campaigns will test your skill and possibly frustrate you depending on your skill level.

Mandate of Heaven is an interesting DLC that adds the events leading up to and including the Yellow Turban Rebellion. Incite the rebellion or attempt to crush it, it's your choice. Be prepared for challenging situations that may frustrate you and make you want to stop. Longtime fans of the series and genre may appreciate the challenge more.

Codi loves to play video games and watch movies. He will watch almost any kind of movie just to experience them. His ideas take inspiration from the shows and movies he watches, and games he plays. He also loves a good pun.
Related Articles: Total War: Three Kingdoms Mandate of Heaven DLC
Share
Tweet
Share
Submit