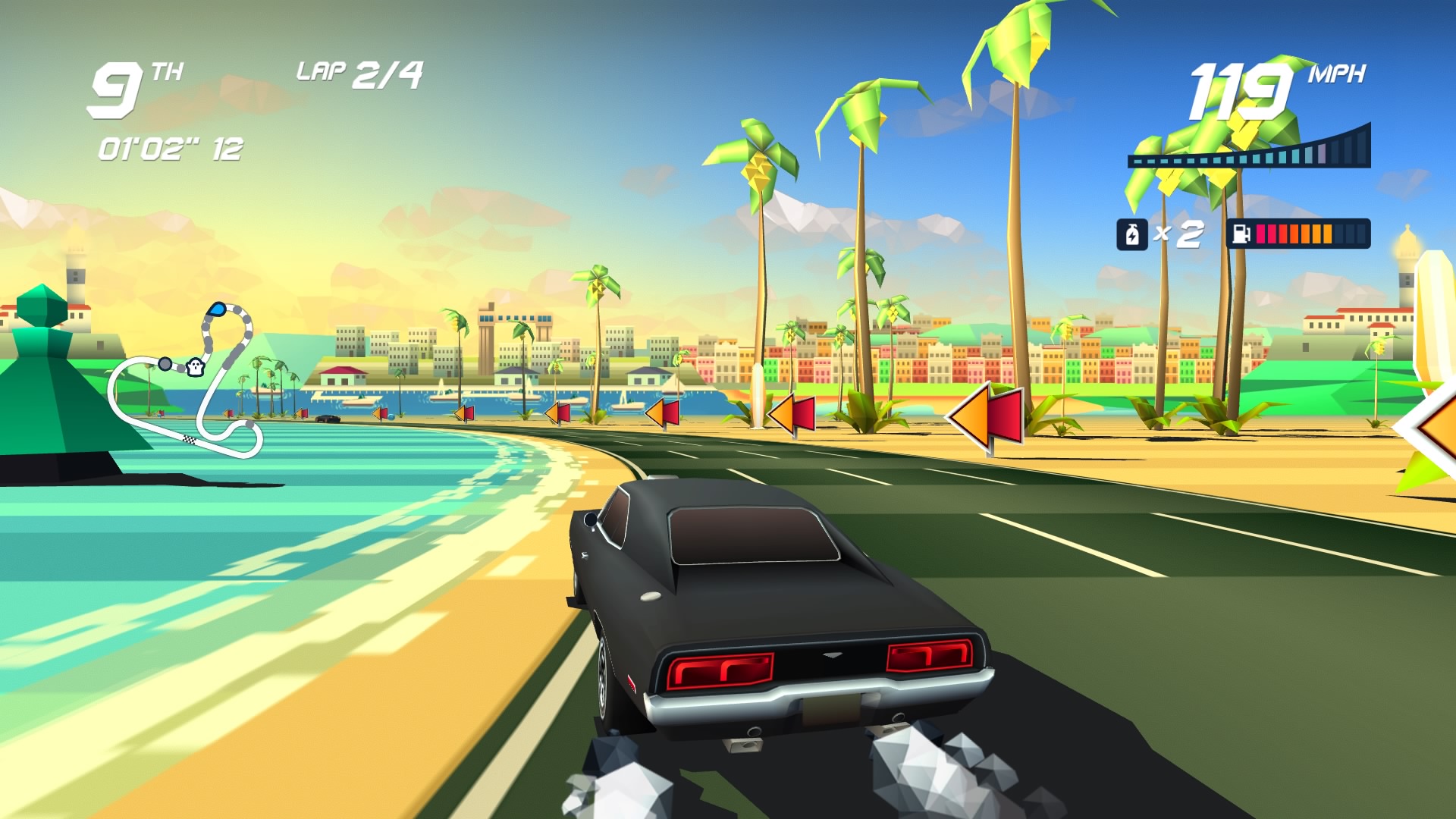 Get ready to take part in some fast paced races around the world in Horizon Chase Turbo. With incredible speeds and plenty of turns, your racing skills will be put to the test.

Horizon Chase Turbo’s main mode is World Tour, which involves you taking on races in cups around the world. You start off in California, which has three cities containing a few tracks each that you must race in. In order to unlock the next race in a city, you must place 5th or higher in the previous race. There are a total of 20 cars racing every time, so that isn’t too much of a challenge. That being said, it doesn’t mean that staying ahead of the pack will be easy.

At the end of each race you will be given a score based on your placement, how many blue tokens you collected during the race, and your remaining fuel. This score gets added to a total score for World Tour as a whole. If you get a low score, you can always replay a race to attempt to do better, but if you do, only the difference between the improved score and the previous score gets added to the World Tour total. The total is how new locations are unlocked and new cars are obtained. For example, you may need a total of 2600 in order to go to the next locale, or 3400 to unlock the next car. These large goals basically require that you place in the top 3 for every race in order to progress. Anything below that results in low score earnings, which won’t do you any good.

Racing is fast paced and intense, which makes placing among the best and earning the necessary score a challenge. The gameplay harks back to the old school arcade style racing games, along with revamped 16-bit style graphics to boot. The soundtrack is enjoyable and adds to the action. The controls are easy to learn but take time to master if you want to win your races. Even though speed is king, you’ll need to learn how to slow down enough to make turns without crashing, otherwise you’ll be left behind. If you hit any of the signs, rocks, trees, etc on the sides of the road, you’ll be sent flying as you bounce a short ways along the track before returning to normal. Thankfully you don’t come to a complete stop and have to drive around the obstacles like other racing games, but it still does its share of damage.

Speaking of hitting obstacles, the most irritating thing to deal with is the other cars. Racing games don’t need to be easy, but the collision system is pretty unforgiving. For example, if you’re speeding down the track and accidentally ram into the back of another racer, your speed almost always drops by half. If that isn’t bad enough, it actually propels them forward from the impact. I’ve had plenty of times where I was cruising at 120mph until another racer swerved in front of me and made me drastically drop down to 60mph, while they speed off ahead as if nothing happened. That wouldn’t be too much of a nuisance if the roads weren’t so narrow, which often requires you to either slip by another car with perfect timing or by getting lucky. In some cases this is impossible or nearly impossible; when starting a race, you are at the back of the pack, and there will be situations where there’s a cluster of cars walling you off from getting ahead. Times like this make me wish there were ways to go off-road to attempt to bypass racers, which would have added a bit more fairness to the races.

On the topic of going off-road, there seems to be a slight “auto steering” function implemented. I noticed that when racing, the car would slightly turn in order to help keep it from driving off the track. That won’t keep you from crashing, but it looks like its meant to help guide the car to keep you going. I even took my hands off of the controller to test this out and it was an interesting inclusion to discover.

Besides the tokens that you can collect, and avoiding hitting obstacles, there is something else you need to keep an eye on: fuel. That’s right, you have a fuel gauge that slowly depletes as you race. Just like with the tokens, you’ll find fuel canisters scattered around the track in specific locations. You need to keep an eye on this, because if you run out of fuel then your car will slowly come to a stop. As long as you pay attention to the fuel, this shouldn’t get in your way, but it does add an extra challenge. During each race, you also have access to a nitro boost. You get three uses before you run out, and the only way to get more is if you pick up a nitro boost that is laying on the track. They are way more scarce compared to other pickups, so you may or may not find any during some races. The boosts are pretty intense and can be extremely helpful in straight lengths of road, and even around turns if you can masterfully guide your car through them. Choose when to use them wisely and you can blast past your rivals.

Another helpful aspect to racing is upgrades that you can obtain. Each main location has a bonus race that you can unlock by reaching a certain total score. By winning that race, you are given the choice between three upgrades that will be applied to all of your cars. These include better steering, handling, acceleration, speed, nitro etc. You can only get one upgrade per bonus race, so choose carefully. It can be tough to get first place in these races, but the upgrades can be helpful in the long run.

In addition to World Tour, there are also the Tournament and Endurance modes, but they must be unlocked through World Tour unfortunately. Tournaments are unlocked as you progress to designated points, while Endurance requires you to beat World Tour. An alternate way to unlock Endurance requires you to get gold in every tournament on the highest difficulty. That takes a good amount of effort, so you may be better off trying to complete World Tour. In the end, Horizon Chase Turbo has plenty to offer, and will keep you busy for hours.

Horizon Chase Turbo is a fun and challenging racing game that harkens back to the old school arcade days. The collision system can be aggravating and dampen the fun as a result. The tracks aren't anything to rave about, but the environments have a bright, plucky charm to them. It has its share of flaws, but it is worth checking out if you need a quick racing fix.

Codi loves to play video games and watch movies. He will watch almost any kind of movie just to experience them. His ideas take inspiration from the shows and movies he watches, and games he plays. He also loves a good pun.
Related Articles: Horizon Chase Turbo
Share
Tweet
Share
Submit