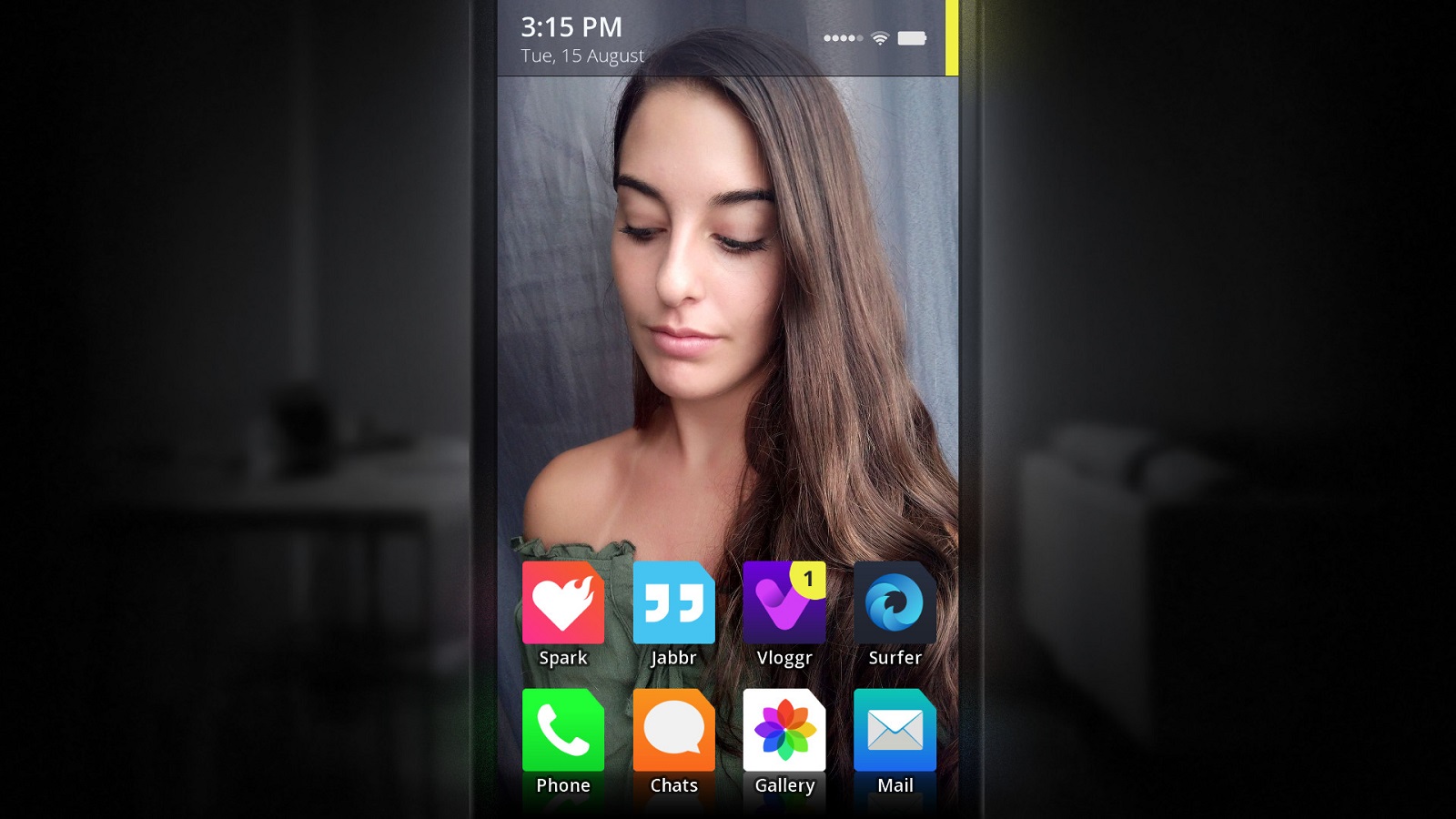 Simulacra is a horror game experienced entirely on the screen of a phone you find sitting on your doorstep. A technical glitch in the phone shows you the passcode for it, so you begin to snoop and quickly discover that it belongs to a pretty young woman named Anna, who is apparently vain enough to have a picture of herself as the wallpaper for her homescreen. As you communicate with (mostly insufferable) people in Anna’s life and peruse her social media accounts, you discover that she is recently out of a romantic relationship and that she’s recently gone missing. A creepy selfie-video saved on her phone implies that she might have been in some sort of danger when it was recorded, and a plot of mystery and suspense begins to reveal itself. 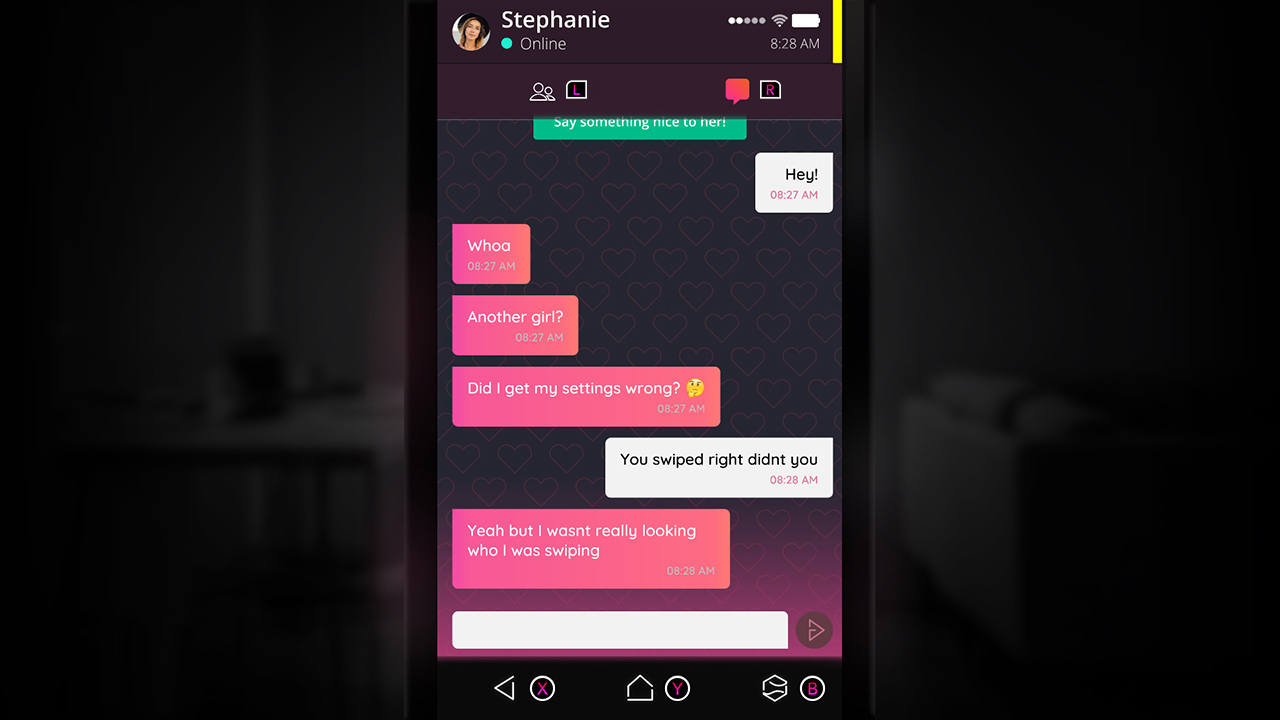 The phone looks and sounds pretty legitimate. You don’t usually feel pressure from the game to perform tasks in any specific order, and most buttons that you end up wanting to press do show you something, regardless of whether it’s relevant to the plot or not. It is up to the player to work out which events or people are red herrings, and which are actually relaying valuable information. The game uses charming, legally-safe knockoff versions of popular tech brands, like Applesauce in place of Apple, Rainforest in place of Amazon, and Spark in place of Tinder, so I found the phone easy to navigate in concept, though some typing difficulties did arise when trying to use a console controller to type on a staggered, keyboard-shaped apparatus. The game encourages you to wear a headset for the best audio experience (duh), which is setting you up to be startled by the occasional creepy ambiance noise because the majority of the game is silent (as it should be) other than the typing and clicking sounds. And the headset does have a strong effect. The first time I heard a scary knock on a door in the game, it was so convincing that I got up from my TV, picked up a can of bear mace, and nervously searched my apartment.

Early in the game, it becomes obvious that some sort of virus is infesting the phone, so in a mystery game like this, you are immediately suspicious of technology itself, or of some supernatural force using the technology to its advantage. Nearly all outgoing calls fail for some mysterious reason, lots of messages saved on the phone are garbled and have to be fixed to be read, and the phone’s operating system sometimes shows you unsubtle, creepy messages like “we are always watching you.” But that is not to say that no humans should be on your list of suspects. Anna has been having difficulty with her supervisor at work and a creepy co-worker has been harassing her, she has been active on various social media platforms, including a dating app, which can be like booby traps (pun not intended) for vulnerable people, especially women, and her verbally aggressive ex-boyfriend blows up her phone throughout. At times, it feels like a who-dun-it, and you get to be the detective.

The game has some problems developing complex characters. Even though I did feel a strong urge to do all I could to help Anna, I learned precious little about her. I knew that she was being harassed, she had a cat, and that she was a hard worker. It’s just not a lot to go on. The two characters you interact with the most throughout the story both come off as irritating and their voice acting is pretty weak, so I felt little or no sympathy towards them, and some of the conversation is a little cringe-y, especially the reparte, if you can call it that, between Anna and her best friend. By far the most troubling lack of development is with that of you, the player. I often had to choose between doing several things, none of which I would ever do in real life. If foul play is suspected, the obvious thing to do would be to turn the phone in to the police, but when one character mentions this in the game, another says: “This is way bigger than the police.” Why?! Surely the resources of the police would be much more helpful than one person burning time on their sofa. And if I am hearing these scary ambiance noises like a knock on the door, why am I not answering the door? If I hear a woman breath directly into my ear, why isn’t that more off-putting? It serves only to startle you, and doesn’t seem to have anything to do with the game itself.

Simulacra excels in premise alone. By the end of the game, I found myself wondering when a better game with this kind of concept will be released. It suffers from an identity crisis. It started out as an enticing murder mystery game, and wound up a tired metaphor. Because of the lack of understanding of my surroundings, at times I entertained some pretty strange ideas as to where this game was going. At one point I began thinking maybe I was Anna the whole time, suffering from some kind of memory-loss, or that I was the killer, messing around in my victim’s phone in order to terrorize the people in her life, or that a poltergeist was following Anna and tormenting her, and frankly, all three of those twists would have been better than what actually happened. My ending to the game (there are multiple) left me feeling a little dissatisfied because as the player, you miss all of the action. It’s the people you communicate with who are the real adventurers and who most likely have interesting stories to tell about what really happened to Anna.

Simulacra excels in premise alone. By the end of the game, I found myself wondering when a better game with this kind of concept will be released. It suffers from an identity crisis. It started out as an enticing murder mystery game, and wound up a tired metaphor.

Tim, originally from where Fallout 76 takes place, is a writer, soccer player, cook, baker, and of course, gamer, just looking for his teammate-in-crime. When it comes to gaming, he enjoys long walks on the beaches of Normandy. He loves traveling, especially fast traveling because it saves lots of time. He's 6' 4" so he's saving up for an XL standing desk for his TV and Xbox. He's just as comfortable going out on adventures as he is staying in with a glass of Nuka-Cola. He's very easy-going, or peaceful-going, or whatever the easiest difficulty is called. If you want him to, he'll tell your parents you met him at the Winking Skeever.
Related Articles: Simulacra
Share
Tweet
Share
Submit