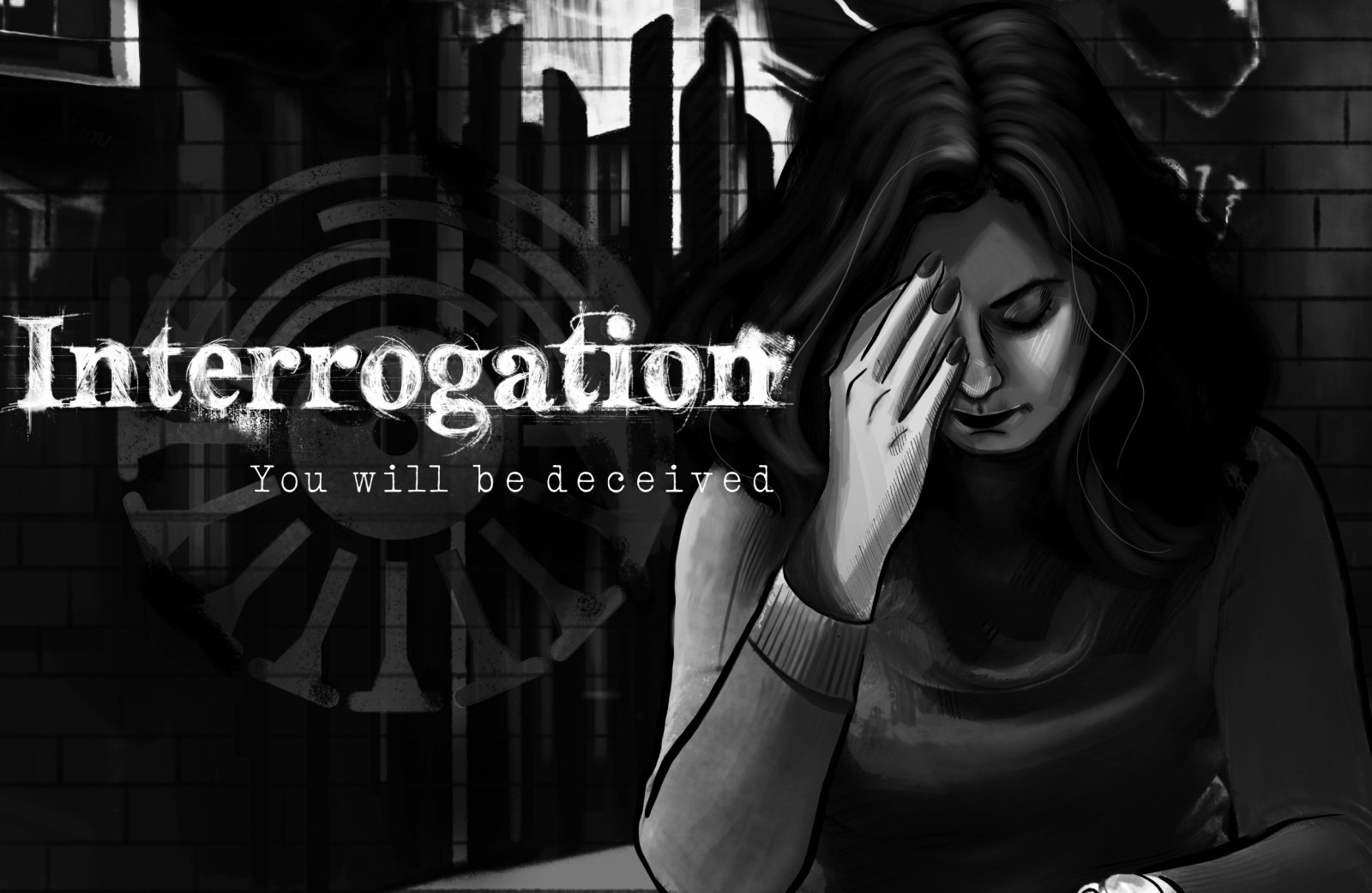 Ever watch one of those crime shows and think of questions you’d ask the perp to get him or her to confess to the crime? Or maybe you’ve thought about what it’s like to pound your fist into the face of some sadistic drug dealer who has setup shop in front of a school? Playing as a rookie detective in Interrogation: You will be Deceived, you’ll not only get your feet wet in the world of justice or injustice, but you’ll be thrown into the deep end of this hardened, noir crime story where you’re given a chance to prove your worth as an up and coming detective. Interrogation is a good cop bad cop morality game where the direct questions you ask will lead you down the rabbit hole – questioning your own morality and views of society.

With its black and white grunge, noir art-style, dark undertones, and interwoven conspiracies of good and bad, Interrogation sets the tone and mood of a world where actions have consequences. There’s no question, Interrogation is a story where you, a detective, find yourself in the middle of a terrorist plot, and it all begins with a simple burglary that becomes a murder case. From the beginning, the developer, Critique Gaming, chose to use strong visual cues and a strong narrative to tell the story of a detective’s race against the clock to investigate and stop a terrorist organization. You’ll need to break out your sleuthing abilities as asking the right questions and being vigilant will go a long way. The narrative of the game takes center stage as each character has their own story and something to hide. In and outside of the interrogation room, the characters have a personality and a life – and it’s just as important to choose how and when to interact with people on your team and the world. 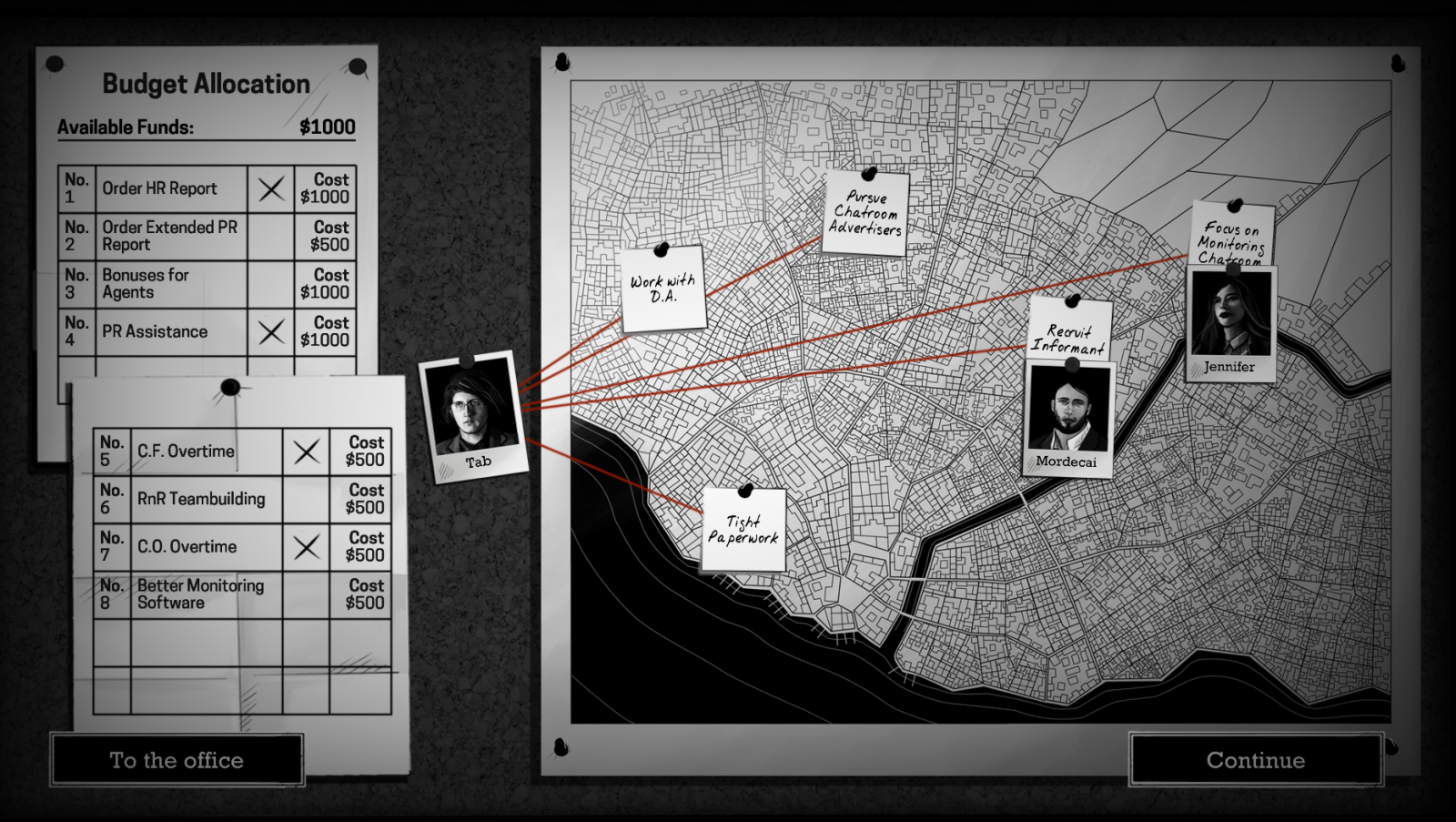 The world is yours

Before each interrogation, you get the rap sheet of the suspects. Some have an extraneous history of criminal behavior while some have little to none. Reading these files gives you insight as to how to approach the suspect and which questions you may want to ask. It’s your job to piece together whether they are capable of the crime or not – whether they are telling a boldfaced lie or being brutally honest. To help you with your detective skills, the game allows you to monitor the heart rate and openness of each suspect. Two meters in the upper right of the screen allow you to monitor their heart rate and their openness with you. This all comes into play when you’re playing good cop/bad cop.

The story begins with you being asked to take a case as a rook detective. Agreeing to undertake it, you are given a case where a couple’s home was burglarized, and the wife was murdered. It’s up to you to determine if the burglar committed the murder or the husband. With the robber and husband available to you for questioning, you are given a report on both individuals. Entering the interrogation room, you are confronted with the alleged criminal and must choose how you want to approach: go in too abrasive and you may make them standoffish. Go in too easy and the perp will see that you’re green. It’s important to recall the rap sheet and to pay attention to the heart rate meter and openness meter as each suspect is different and responds to different questions. Each question asked will either lead you down a path where the answers you get may or may not contain pertinent information. The key is to manipulate them and extort their strengths and weaknesses. At any time, you can question multiple suspects by clicking on their picture on the side of the screen. Eventually, you will ask the right questions and be presented with yellow text which tells you that you are on the right path. I definitely commend the developers for creating a dialogue tree that’s expansive and offers choice. You can outright ask the suspect if they committed the crime, but it will surely infuriate them and make them look at you as a bad, incompetent detective. 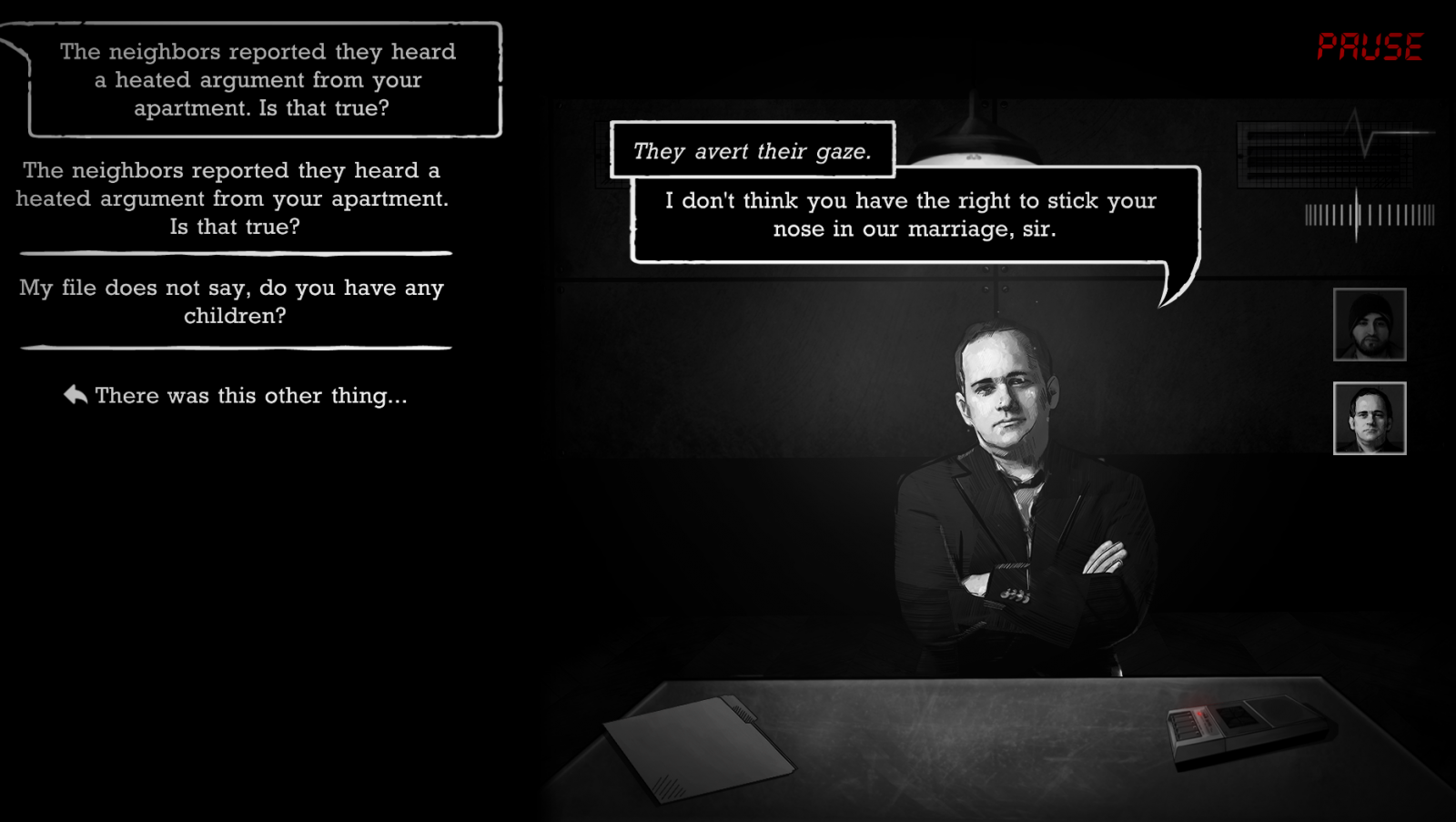 During my first play through, I found it difficult to know when the suspect was responding to my questions because the heart rate meter and openness meter are difficult to read as they constantly fluctuate. It would have been nice to hear the suspects heartbeat or see them become fidgety in their seats, but because the artstyle of the game is somewhat static and hand-drawn, those aren’t options. If you feel a suspect is being tough or you want to watch them piss their pants from fear, you can stop the recording device in the room and choose to physically torture them for a confession. Mind you, doing so can either cause them to pass out or land you in a heap of trouble.

After grilling the husband and the burglar and learning that the husband killed his wife while trying to blame the burglar, I learned that he is also a part of a terrorist organization called the Liberation Front that meets online to discuss how the country is going to shit, and they are the answer to the problems. Upon learning that he killed his wife out of rage because their marriage was on the rocks, you now find yourself in the middle of a massive threat to the city, and it was right under your nose. Sticking to true detective work, after every case, you must fill out reports after the suspects confessions. If you did some questionable tactics to get a confession, your captain will want answers. Do a good job, and he will commend you for your efforts. After successfully solving crimes, you get upgrades called memories that help shape the type of detective you are. It’s good to see that this narratively driven story opts to add a level of depth to your character and allow him to grow in the police department. 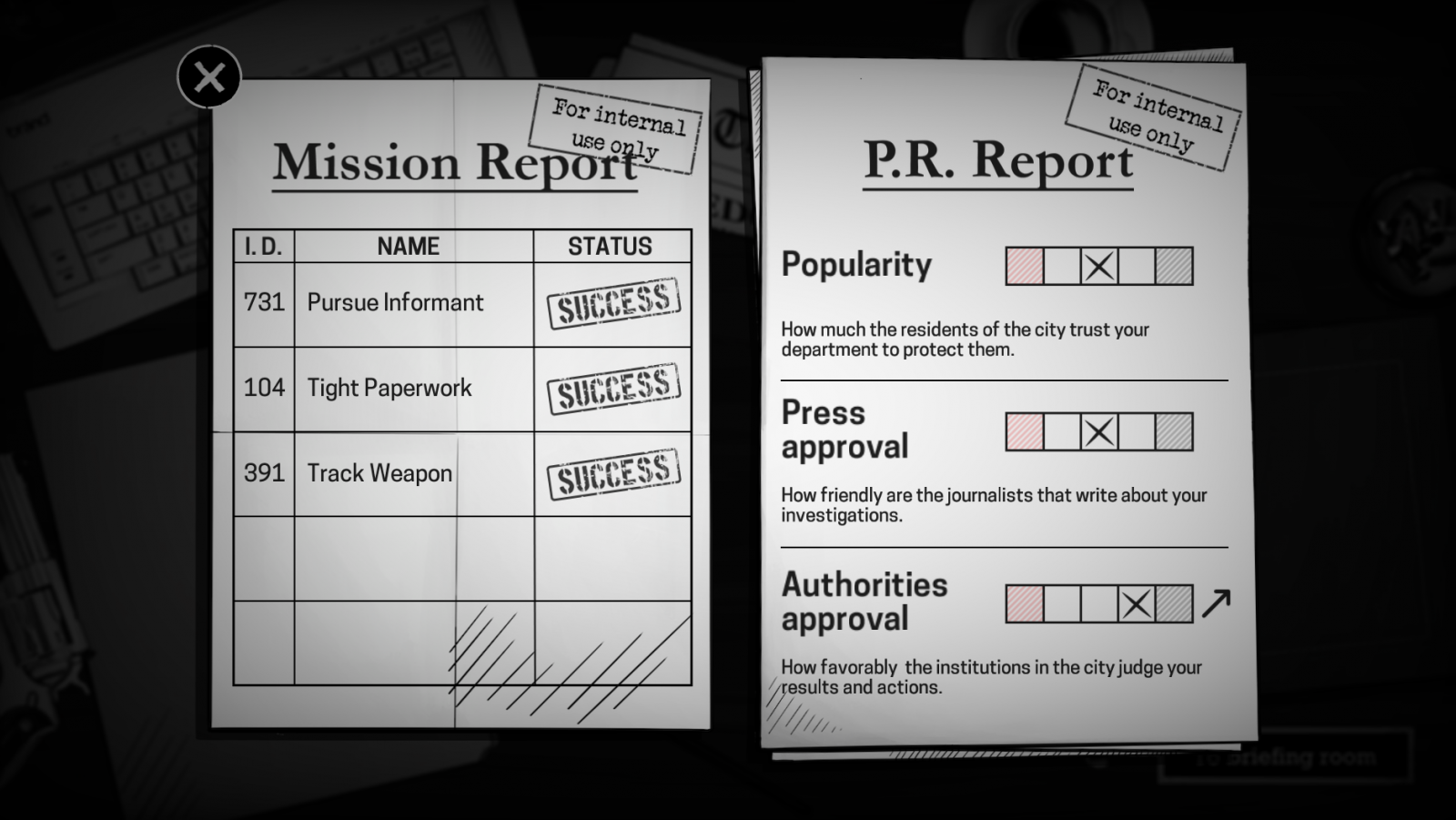 But this is where the game opens up and the real detective work begins. You are assigned a team to work with and help you find out the nature of the Liberation Front. Your interactions with your team members will determine how you go about interrogating suspects. Because your team members all have different sets of skills, you can utilize them to help in the take down of the Liberation Front. I won’t spoil the characters and story line, because they are meant to be experienced and not told.
With the narrative is the center of the gameplay, there are times when the questioning suspects feels bogged down with trivial dialogue to make it appear as though you are having a real conversation. With the goal of finding the ideal dialogue choice to progress forward, the game often feels predetermined. And this brings me to my next gripe: though the developers want you to feel like a true detective, many of the puzzles and side tasks feel underwhelming and easy, especially when compared to the amount of care and thought put into the narrative.

Interrogation: You Will Be Deceived

Interrogation: You will be deceived is a game that some will play straight through for the narrative experience and some will for the experience of being a detective. Both offer an amazing experience that is elevated by the characters and strong narrative. I just wish that during the times of stress, the game made the player feel a sense of angst.

T.K. is a narrative designer and creative visionary. As a game writer, he spends much of his time designing and developing worlds, developing deep characters, and writing strong narratives to evoke emotions from the player. If you can't catch him writing, you can catch him on 2's.
Related Articles: Indies, Interrogation: You Will Be Deceived
Share
Tweet
Share
Submit