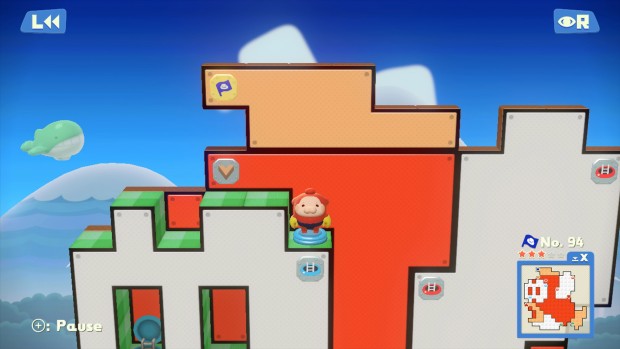 When the original Pushmo was released on the 3DS almost 3 years ago, it was one the system’s killer apps. It was one of the best downloadable games Nintendo had ever put out and became one of the best reasons to own a 3DS during a tumoltous time when the handheld system was still trying to give gamers a reason to own one. Developer Intelligent Systems, the team responsible for games such as Paper Mario and Fire Emblem, had on their hands a beautiful and original puzzle game that received critical acclaim across the board. Now, the series makes its way to a home console for the first time with Pushmo World for the Wii U; but is this new entry worth the praise its handheld counterpart received?

For those of you new to the the series, just like the original Pushmo and its sequel Crashmo, Pushmo World is a puzzle game that puts you in a playground with climbable blocks. The concept of the game is to arrange those blocks and figure out a way to get from the bottom to the top. Sounds simple enough, doesn’t it? At first, Pushmo may seem like a very simple and colorful puzzle game on the inside but on the surface lies a very tricky and (in later levels) very difficult puzzle experience that will have you scratching your head for hours as to just how exactly you’ll be able to get your character up to your goal and move on to the next level. The enjoyment of the game comes from the satisfaction of figuring out how to do this. The first handful of levels feature tutorials that are unskippable, which is not a bad thing, especially not for a puzzle game. However, a lot of players will be jumping on this game after playing the original on the 3DS. Having an option to skip tutorials for returning fans of the series would’ve been nice.

You take on the role of Mallo, a red, sumo wrestling cat looking fellow – not to be confused with Mallow from the Mario RPG series, although there is a resemblance. Mallo is visiting Pushmo Park and when you speak with the park’s caretaker, Papa Blox, you find out that children have become trapped within the Pushmo blocks and it’s your job to rescue them. If you played the earlier game, it’s the exact same opening sequence, almost word for word, so you should already know what to expect. It’s a simple as a video game story can get, but this is a puzzle game after all. The story or characters serve little to no purpose other than to give you a reason for pushing and pulling these blocks.

As I mentioned earlier, Pushmo World may seem like a simple puzzle game at first, but a few minutes into the game and you can start to feel the difficulty of each level getting progressively higher. You begin each level with a flat surface (or Pushmo). Mallo can pull and push each individual block either by standing in front of the block or standing on either of its sides to create steps as you make your way up. You have three steps of depth and you can’t pull blocks any further than that so the fun part is figuring out how to get to the top with those restrictions. The brilliance of the game comes from its simplicity. The character you control can run, jump, pull and push. That’s all. Pushmo World shows that you can create a very complex game with the simplest of controls.

Once you get past the basic levels, using the right analog stick to shift your perspective comes in handy. You can slightly rotate the camera angle left, right or upward and lock it in place to help you see the blocks from a different angle. It’s especially helpful when you need to make those diagonal jumps that can send you back to the ground floor if you miss them. New gameplay mechanics are added as you progress through the game such as pull out switches, push back switches and manholes, which add a slew of new ways to solve puzzle and keeps the game from getting too repetitive. Once you start getting to the later levels, the difficulty really ramps up and you’ll end up spending minutes on each new level – and it only gets more difficulty as you progress. When bigger Pushmos known as Murals are introduced, the game starts to feel more like a platformer with heavy puzzle elements. However, the game is very forgiving so if a Pushmo is too challenging, you can simply press start to move on to the next level. You could even skip your way through the entire game if you wanted to, but where’s the fun in that? There’s also an entirely separate training area that shows you how to solve some of the harder puzzles which you can visit if you wanna take a break from the main Pushmos. If at any point you become stuck, you can reset the puzzle completely or use a very handy rewind feature that undoes some of your mistakes, similar to Braid.

The Pushmo Studio from the handheld games is back, and it’s simply one of the best reasons to own the game. If you’re creative enough, there are plenty of tools at your disposal to create any puzzle you can think of and share it with friends. Creating your own Pushmos is just as accessible as it was on the 3DS, so you can simply use the stylus to swipe up a puzzle in a matter of minutes or even seconds. A new addition exclusive to the Wii U version is the Pushmo World Fair which lets you share and download puzzles that other players have created.

Pushmo World retains the same originality and addictive gameplay that the original Pushmo offered on the 3DS, which is in itself a good thing, but also what leads to the only small problem I had with the game. This game is better suited for handheld gaming, there’s no getting around it. The original Pushmo was a great original puzzle for gaming on the go, originally designed to take advantage of the 3D features on the 3DS. After my first day of sitting down to play Pushmo World on my TV, I quickly switched to only playing on the touchpad. It makes me think that I may not have spent as much time playing it as I did if it was on a different home console that doesn’t have an option to take your game to the smaller touchscreen like the Wii U can. It’s not a big a strike against the game, but playing the game might leave you wishing you could take it with you on the go.

Pushmo World may not add much new to the series, but if you are a returning fan of the franchise, you have a whopping 250 new puzzles that will put your brain to the test. If you’ve never played a Pushmo game before, this newest installment will keep you occupied for hours on end. Pushmo was one of the best downloadable games on the 3DS and Pushmo World is undoubtedly one of the best downloadable games you can get on the Wii U. While it’s definitely better suited for handheld gaming, as a puzzle game, Pushmo World delivers everything it needs to.

With hundreds of puzzles to keep you occupied for hours, Pushmo World is a wonderful experience, if only a bit familiar.