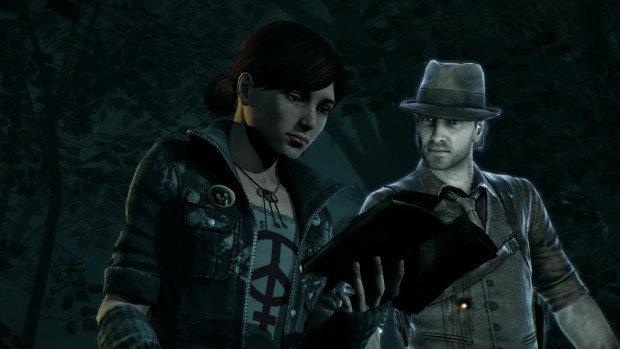 Murdered: Soul Suspect reminds me of a bygone era – the PS2 era, specifically.

It was a time when mid-tier development was actually a thing, when developers with a smallish budget and a few unique mechanics could thrive and find a modicum of success. Games like Psi-Ops or Disaster Report, while flawed, still felt exciting as they experimented with ideas too risky for more mainstream tastes.

And that’s what Murdered: Soul Suspect feels like: a detective game inspired by point-and-click adventure games, of all things, featuring zero combat and focusing almost entirely on narrative and problem-solving. And while it’s definitely a flawed experience, it’s still uniquely entertaining – something different wading amidst a sea of shooters.

You play as Ronan O’Connor, an inked-up hardboiled Salem, MA detective with a checkered past and a penchant for fedoras and chain wallets. You and your fellow detectives have been hunting down the Bell Killer, a notorious murderer who constantly remains one step ahead of the police. Ronan, against the advice of his colleagues, investigates a Bell Killer sighting one evening, and takes home a few bullets in his chest as a souvenir for his troubles.

Newly dead (and not exactly loving it), Ronan must use his ghostly powers to solve his own murder. Along the way he’ll explore Salem’s various haunts and help other apparitions while piecing together clues leading him to the ultimate mystery behind his own paranormal demise. He’ll meet a precocious punk teenager name Joy, a reluctant medium to the deceased and witness to Ronan’s murder. Ronan needs her to help him interact with the world (he is a ghost after all), and in exchange, Ronan must help locate her missing mother.The story isn’t always amazing, as it leans on noir and supernatural thriller stereotypes a bit more often than not, but its internal logic is consistent, and the small corner of Salem that Square Enix and Airtight Games have built feels like a lived-in place with a grounded sense of history. Plus, Ronan and Joy’s relationship over the course of the six-to-eight hour narrative feels natural as they both learn to depend on each other. It’s not quite up to the standard set by Joel and Ellie in The Last of Us, but their banter never grows tiresome.

As a ghost, you can’t exactly interact with corporeal objects, so you’ll need to possess people to help you access inaccessible places, influence them to think about different clues, or use your spectral powers to activate various home electronics to influence the living’s behavior. Most scenarios usually involve wandering around a crime scene, looking for various clues to help you solve each situation or bits of lore to flesh out the narrative. It’s actually very reminiscent of “pixel hunting” in conventional point-and-click adventure games, as you scour each room for a tiny newspaper clipping or shell casing to further your investigation. It can be a bit frustrating to hunt down that last, seemingly invisible lead or scrap of paper, but there’s a certain thrill in casing a crime scene, learning more about the deep mystery and the frightful backstory of colonial Salem.

Once you’ve found all of the required clues in a particular place, you’re then required to piece them together to move the investigation forward. This is where things get a bit dodgy, as the game asks you questions, requiring you to choose from the list of items you’ve found, and requires you to figure out – in frustratingly vague terms – which of these you’d need to pick to form a successful conclusion. One moment has you trying to influence someone’s thoughts so they reveal some more information about a murder they may have committed. Do you use the incredibly suspicious shovel that was hastily stashed in the closet? Or how about the headline of a break-in? Nope – you just use the general “missing girl” clue you got at the beginning of your investigation. This happens numerous times – you’ll feel like you’ve got a handle on the mystery, but the game usually asks for more general concepts to further your questioning. Likely to appeal to a wider audience, it relies on a weird and more basic sense of logic that never feels natural. Luckily, it’s pretty easy to bludgeon your way through if you don’t get it right the first time.

While 80% of the game revolves around your detective work, the remaining bits are made up of stealth sequences – because apparently Square Enix and Airtight Games didn’t get the memo that forced stealth sequences don’t necessarily make games better. Periodically, demons will show up to harass you, and you’ll need to sneak up behind them and take them out with a handful of button presses, or you’ll need to bypass them entirely. These sequences do break up the monotony of sleuthing, and they add some action without breaking the internal logic or requiring you to shoot ghost bullets or anything. At best they’re a distraction, but at their worst, they become frustrating moments of trial-and-error.

So, yes, Murdered: Soul Suspect’s logic is a bit flawed. It’s got needless stealth bits, its version of Salem is filled to the brim with lore but its citizens stand around like lifeless, well, ghosts, the story gets a bit dumb near the end, and for some reason my current objective continued to read “Exit the Attic” for about two-thirds of the game.

And yet, despite all of its issues, I still felt compelled to see this mystery to its end. It’s definitely a different kind of game for a major publisher like Square Enix, especially in the modern games climate – and for Murdered: Soul Suspect, different is enough.

Murdered: Soul Suspect is what you get when you create a point-and-click adventure game through the lens of a modern console game. It’s not perfect, but it’s a mystery worth solving.