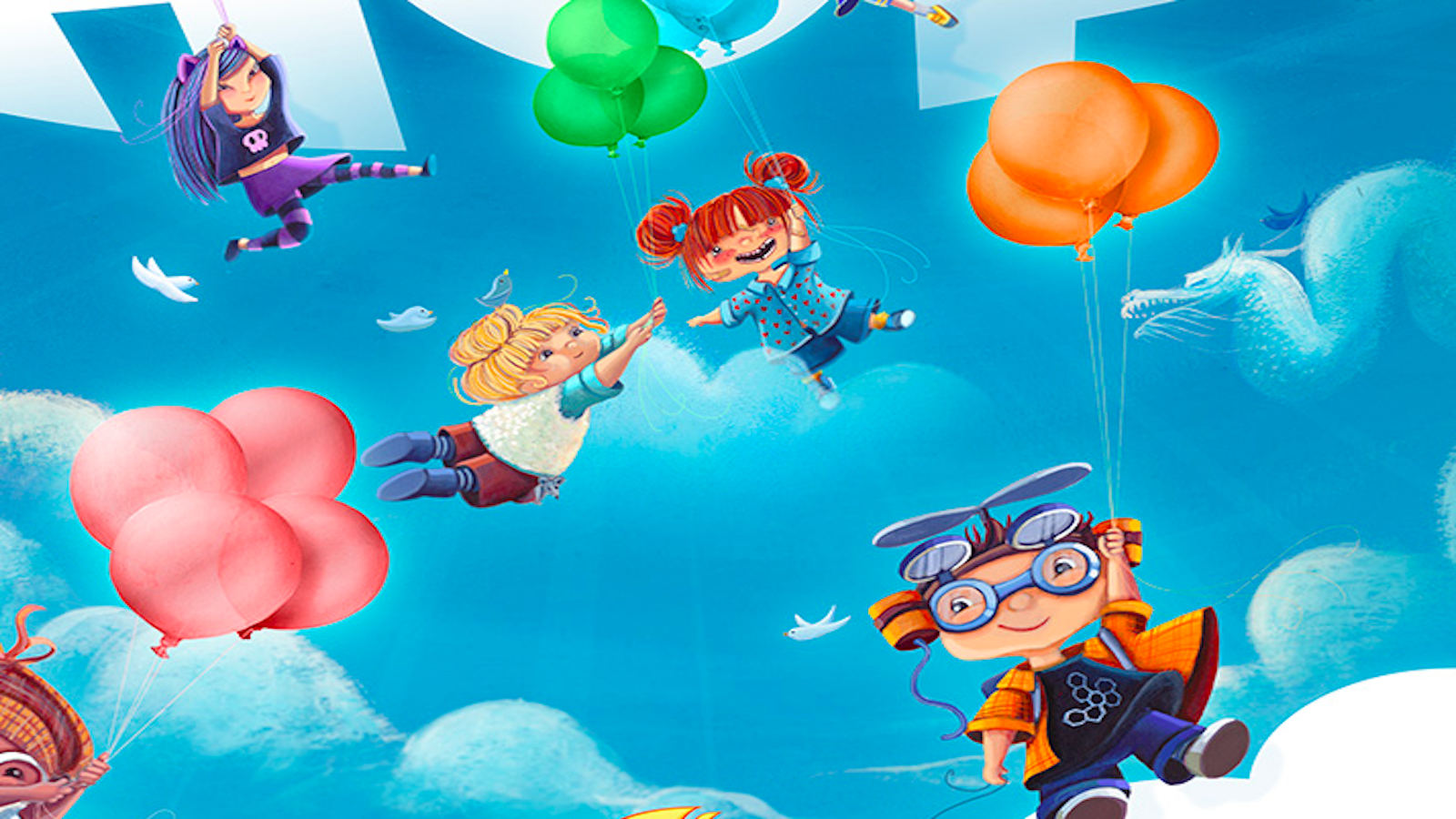 I appreciate movies geared towards children which find ways throw a bone to the adults. A subtle, well-placed joke or innuendo can actually add to a family flick, making it an enjoyable experience for all. I’ve seen this concept in many family games recently. Gone are the days of suffering through Candyland, as they have been replaced by games like Kingdomino that are accessible to children while maintaining enough depth for adults. Sadly, Funforge’s Hop! takes a step back to the days of shallow entertainment.

Hop is a simple game. You toss a rainbow hoop to another player who attempts to catch it with their index finger. Players gain points from catching or progress up levels if their toss was successfully caught. That’s the gist of the game. If only the production value was that simple.

Figures look great, but the massive board is a bit much.

Figures look great, but the massive board is a bit much.
The over-the-top components are nothing short of ridiculous. The story behind the game centers around kids hoping amongst the clouds catching rainbows and looking for legendary creatures called hippocorns. The board is an oversized three-dimensional cloud. The kids are represented by magnificent, hand-painted figures, and there are tons of tokens to keep track of health and victory points. The assembled monstrosity is large enough to prevent you from clearly seeing someone on the other side of the table. At first, it seems like you are in for a treat of a game until you read the rules and realize, “Is that all there is?”

The game uses what can only be described as rejected Harry Potter Quidditch positions to name the roles of players in the game. Hurlers will toss the rainbow. Skewerers will catch the rainbow with their index finger. Assisters can help the hurler toss the rainbow, and turbulators are there just to make the hurler fail.

Play rotates each turn to a new hurler who gets to designate the skewerer will be for that round. The hurler then draws and reads aloud the top card from the dare deck. Dare cards add challenges to the throw, such as having to throw with one eye closed or tossing the rainbow off your foot. They are silly and add humor to the game, and there’s enough of them to keep the game from getting stale in a single play.

Anyone not involved in the current throw can now secretly bet on whether the toss will be a success or a failure. For such a light-hearted game, the betting can seem a little mean- spirited as it may become obvious which hurlers will be more successful than others.

The lighthearted theme is showcased everywhere, but the game play can leave some out.

Successful throws lead to bonuses for several people. The hurler gets to jump up a level on the cloud board. The skewerer and any assisters get to collect cloud tokens. Cloud tokens each have a hidden victory point value on the other side, and players hide these until end of game scoring. Some tokens can have a zero value, which seems a bit harsh for someone to come up empty after performing the one action the game requires.

The lighthearted theme is showcased everywhere, but the game play can leave some out.
Betters can dove or crow tokens depending on whether they correctly guessed the result of the toss. Three doves for correct guesses allow you to jump another level on the board, while three crows cause you to lose any saved doves and a balloon.

So what are balloons? You’ll get to know them well as you’ll find the game will be decided by balloons more than anything else. Every player starts with just five balloons in front of them. You lose one whenever you miss a toss as the hurler or, as mentioned, collect three crows. Games end when either someone reaches the top cloud (level 6) or loses all their balloons. With few balloons than levels, you’ll find many games will end before anyone reaches the pinnacle.

It may seem I am being incredibly unfair to the game. After all, it’s clearly not meant for adults. While I agree that some kids will enjoy the game, it’s clearly not for every child. Those without fine motor or visual impairments may find the game difficult enough without incorporating the dares. If this doesn’t point out a potential red flag, remember that the hurler always gets to pick their partner. It doesn’t help that the rainbow itself isn’t very aerodynamic and tosses tend to rise and fall with little time to react, making the game a challenge for those with the quickest of reactions.

Even if the game appeals to you, its longevity can be questioned. The dare deck isn’t so deep that you will encounter repeat cards in just a couple of plays. Throw in the fact that, at the heart of things, it’s nothing more than tossing a rainbow at people’s hands, then it’s not surprising to learn that the game’s original, and ridiculous, price tag of $70 has plummeted. The game can be found for under $25 now, which may be worth it for the components if not the game.

Hop! is an absurdly overproduced game with painted miniatures, a colossal board, and dozens of tokens all wrapped around one of the thinnest gameplay elements created. You toss rainbows at people and attempt to collect tokens and bound around the clouds. What could be a fun game for some is more likely to turn off others with its repetitiveness and lack of replay ability.