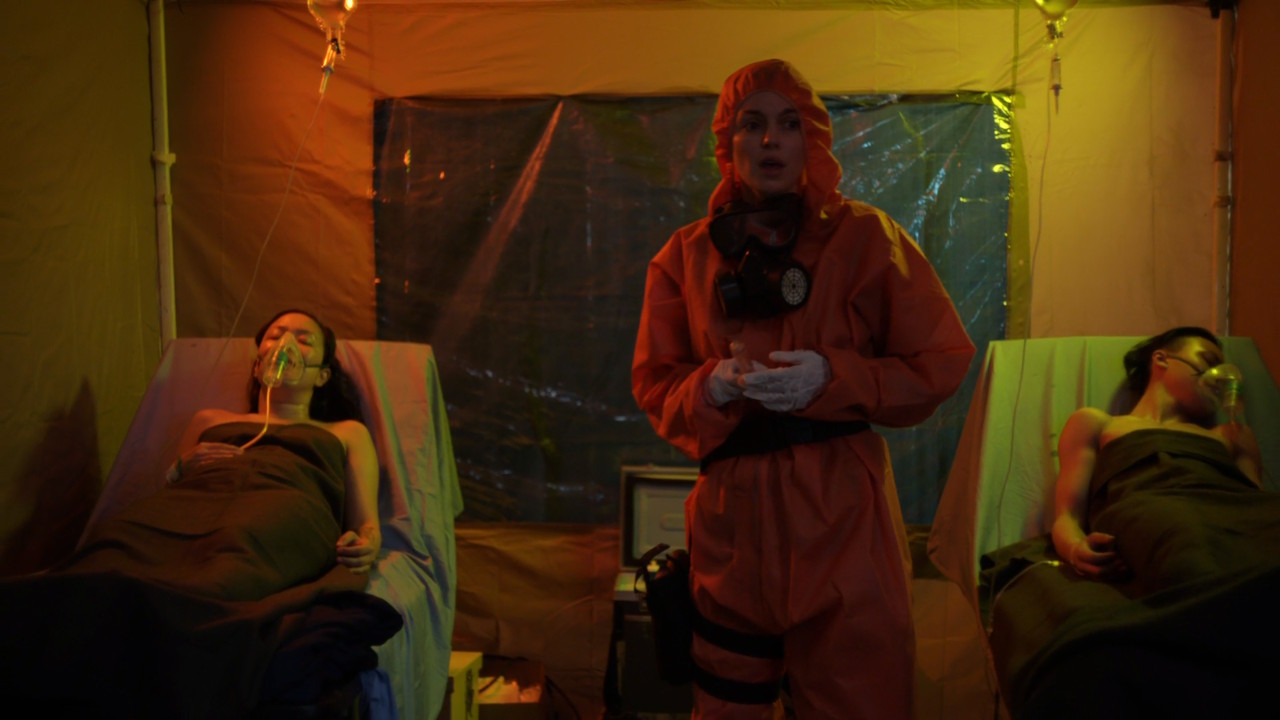 Wales Interactive is the publisher that comes to mind when I think of modern full-motion video games now. They’ve really gotten it down to a science, and recent projects always come on my radar, even if I haven’t reviewed the last few games. This time around, we have The Complex, a sci-fi spin on a trio of characters locked in a room with little time to think things through .While it does have a few missteps in comparison to previous romps, it’s an overall fun little movie night if you’re trying to stay in. 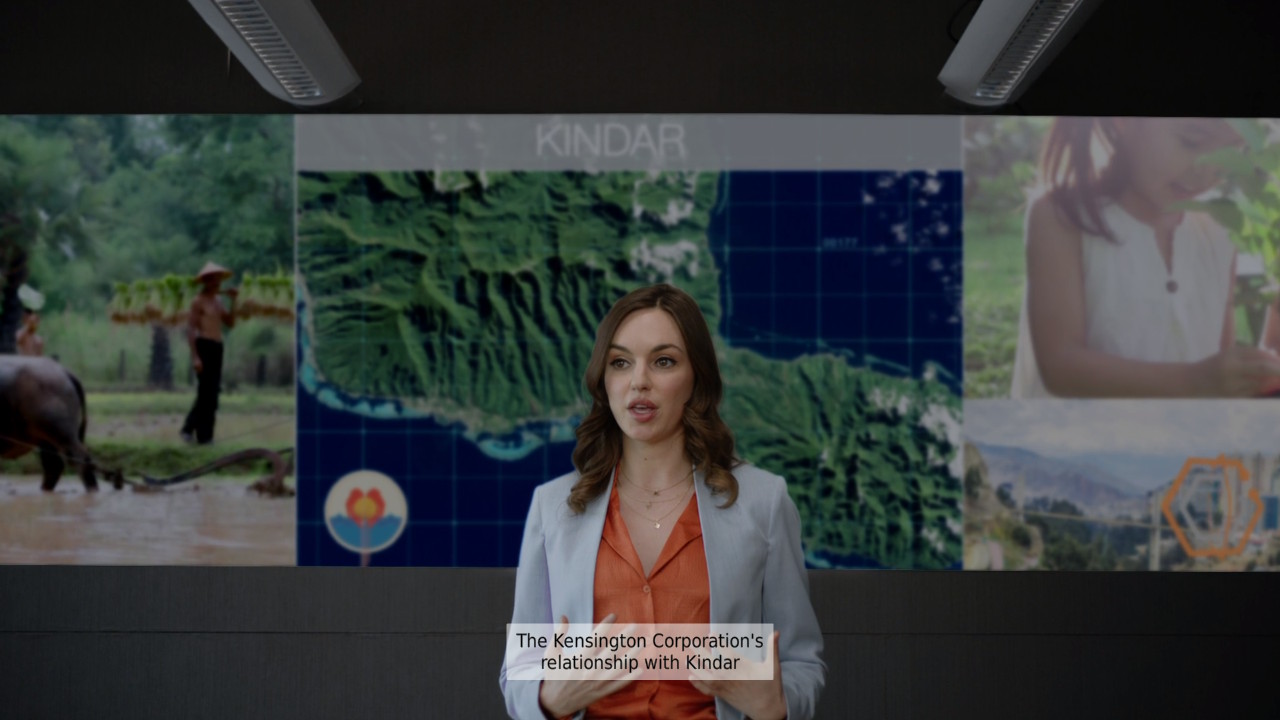 The Complex centers around Dr. Amy Tenet, who’s responsible for nanocell technology that aims to create a medical breakthrough. In cooperation with the nation of Kindar, the company Amy works for is able to advance in the technology’s development. However, after Clare, a Kindarian employee, gets suddenly sick while on the subway, Amy and her long-lost partner Rees Wakefield have to bunker up in the titular complex and try to save Clare. What follows is a short movie where you’re given the choice to get to the bottom of things once and for all.

It’s difficult to talk about this FMV title without comparing it to one of my favorite ones of Wales Interactive’s repertoire, Late Shift. While it had its problems, the whole experience felt refreshing and exciting, with choices that felt like they mattered. While they do to some degree here, playing through the game multiple times hammered home how limited the experience can get, which is exacerbated a little more since most of the game’s nine endings are derivative, only diverging near the end of each run. Thankfully, there’s a skip function that you unlock after your first playthrough, so you can fast-forward through anything you’ve seen. However, it also just goes to show how little new content happens between playthroughs, as there’s only a few unique scenes on the paths to the endings. 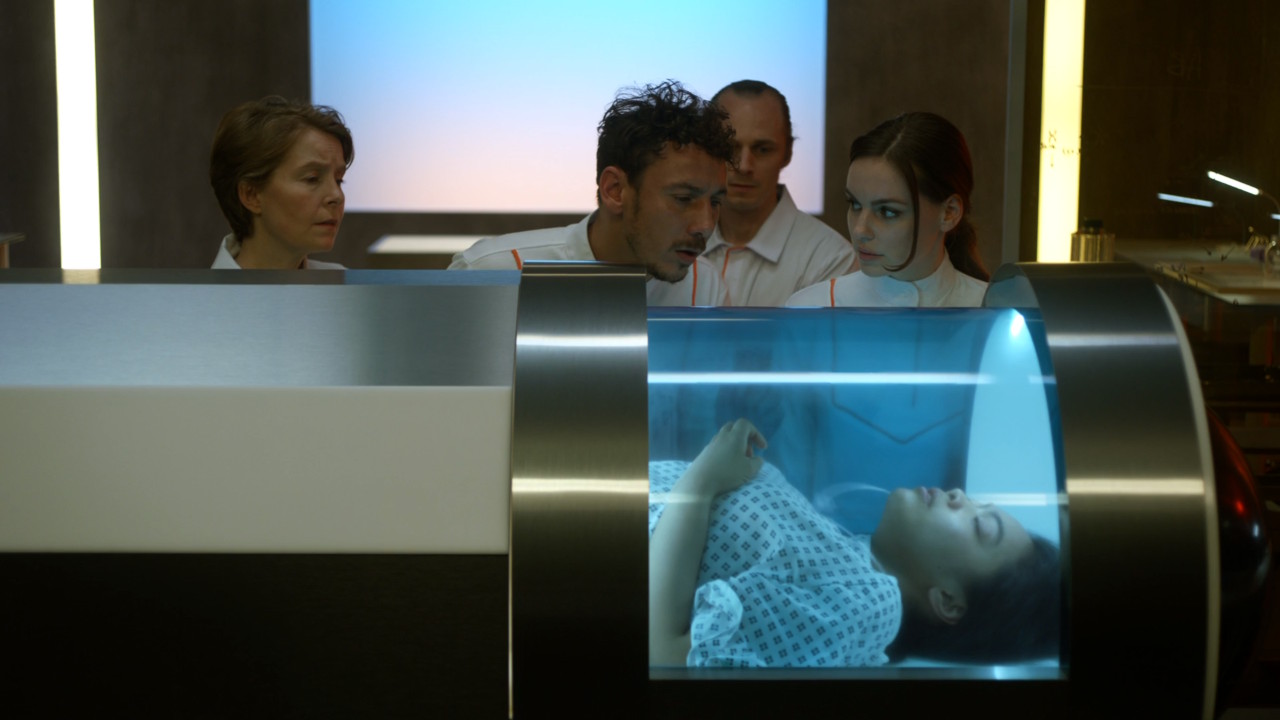 That said, this isn’t a problem if the content itself is good, and… it’s serviceable. While Late Shift had a host of different locations to explore (though you might not see them all in one playthrough), The Complex consists of… well, the complex. It feels closer in tone to The Bunker, which I found rather cramped and uninspiring when I played that. The main cast of characters gives it their all, and I appreciate the tension between Amy and Rees as well as Clare. I did appreciate the overall look of the sets and design; it felt like I was watching a fun episode of a cable sci-fi network show. Unfortunately, the budget feels like something of the same caliber, as special effects are sparse and there aren’t enough action sequences that can mask this quite well. Heck, there’s even a couple of telegraphed jump scare moments that made me roll my eyes at the whole affair rather than make me jump in my seat. 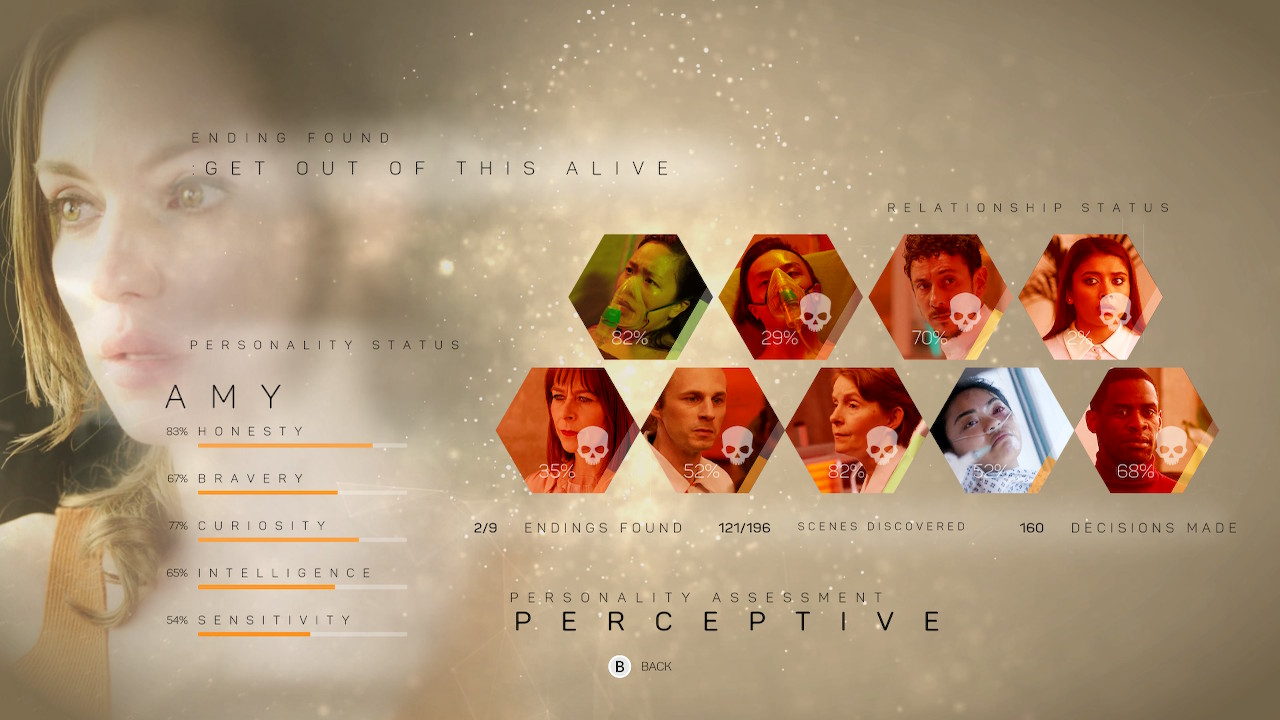 Something that makes The Complex different from the other pure FMV games (in essence, those that play like a movie rather than something like The Infectious Madness of Dr. Dekker, with its puzzle elements) is the inclusion of a relationship and trait system. Throughout your current playthrough, you can open up a menu that explains the relationships of each character you meet. You can also shape Amy’s personality based on decisions you make, which can determine which ending you achieve. While it’s a pretty ambitious concept (and there are some important scenes that can only be experienced if your relationship with the reacting character is high or low enough), I felt like this system as a whole is underused due to the format of the game. These mechanics work well for an RPG that spans dozens of hours, or a narrative walking simulator like The Walking Dead, but here? It feels more like an afterthought.

The Complex is a decently serviceable FMV game that has an ambitious relationship mechanic that drives choices forward. However, with some odd presentation choices and limited freedoms, this feels more like a midday movie matinee than a crowd-pleasing blockbuster.

Elisha Deogracias is an aspiring accountant by day, freelance writer by night. Before writing for Gaming Trend, he had a small gig on the now defunct Examiner. When not being a third wheel with his best friends on dates or yearning for some closure on Pushing Daisies, he's busy catching up on shonen manga and wacky rhythm games. Mains R.O.B. in Smash. Still doesn't know if he's a kid or a squid.
Related Articles: Indies, The Complex
Share
Tweet
Share
Submit