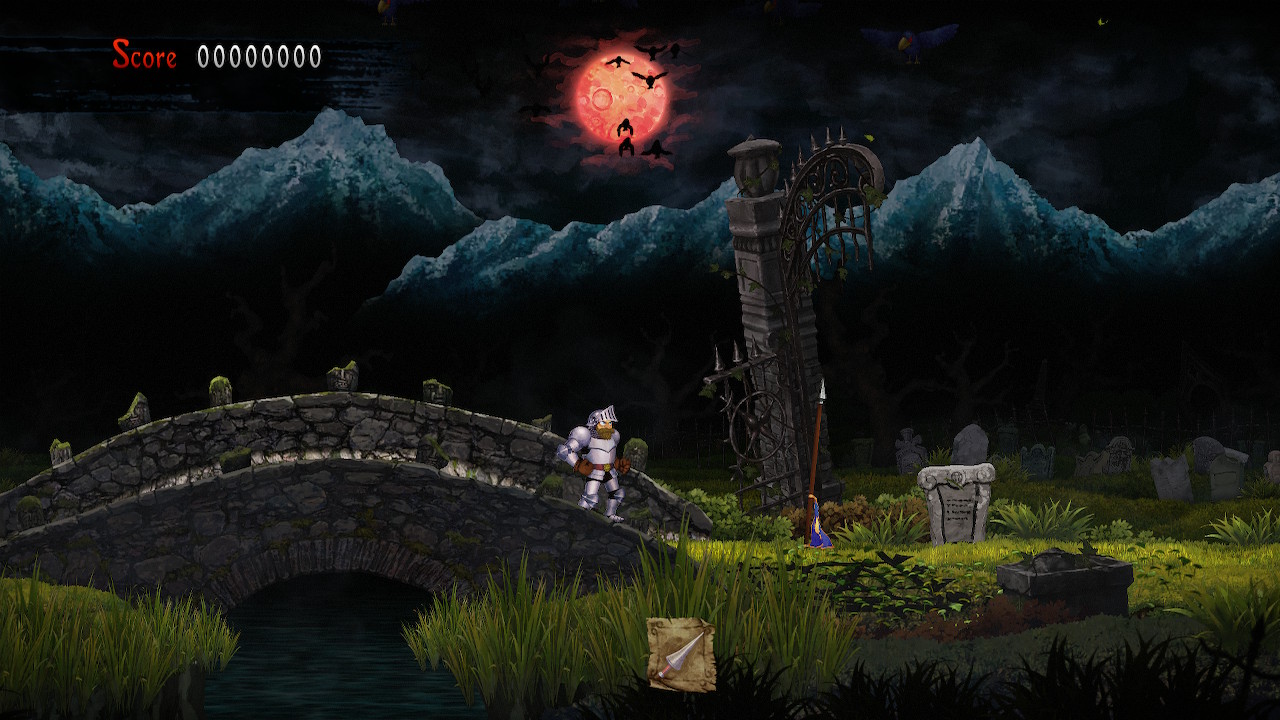 Ask any gamer to compose a list of the toughest games in history and you’re bound to see Ghosts ‘N Goblins on most of the lists. The frustrating, yet addicting, series began life as an arcade cabinet in 1985, before being ported to the NES in 1986.  Later a sequel, Ghouls ‘N Ghosts, was released in both arcades and on the SNES.

I’m glad to say that Ghosts ‘N Goblins Resurrection, the re-imagining of both Ghosts ‘N Goblins and Ghouls ‘N Ghosts into one package, retains that brutal difficulty found in the original, but now features multiple modes to ensure that players of all skill levels can complete the game. Some may say playing on anything less than the hardest mode is heresy, I say “thank you” because I could finally see the end of the game. 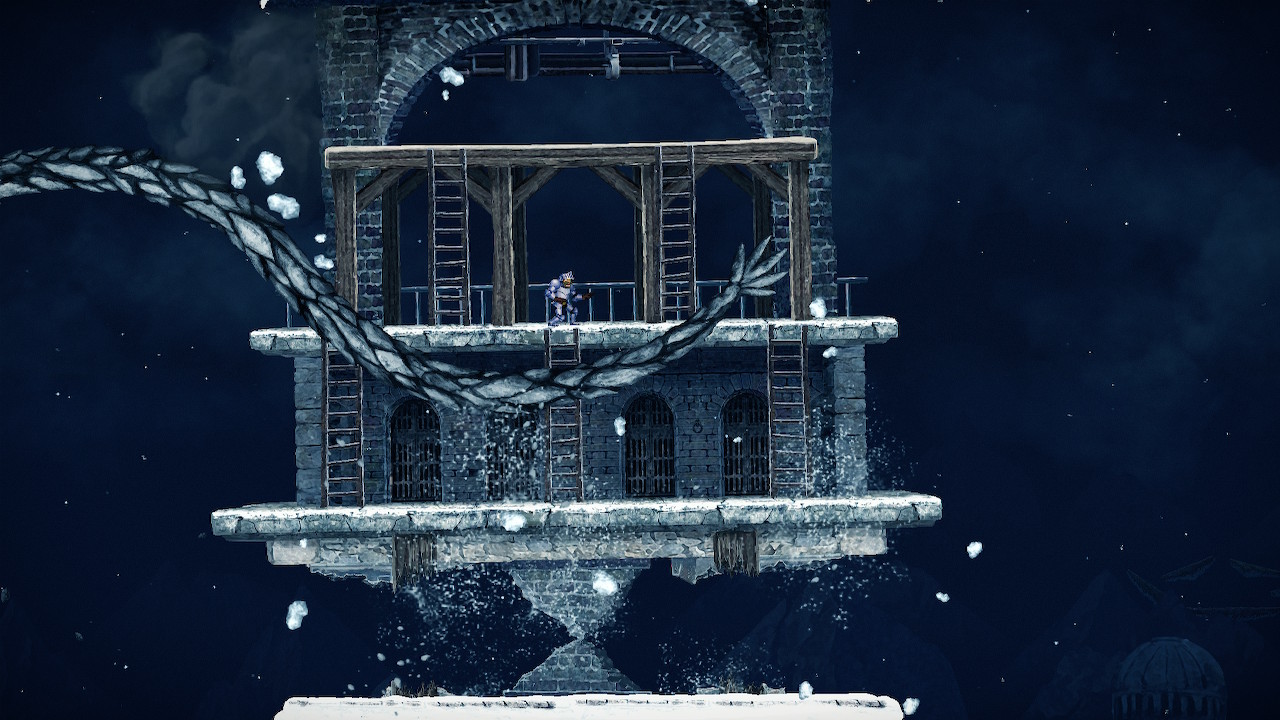 There are four modes available: Legend, Knight, Squire, and Page. Legend mode harkens back to the original arcade: two hits and you’re dead, you respawn at the last checkpoint, and you’ll see no mercy from the onslaught of enemies. Knight mode allows you to take three hits but maintains the difficulty from Legend. Squire mode allows you to take four hits before death and reduces the number of enemies on screen. Finally, Page mode is essentially an immortality mode, where dying means nothing as you immediately respawn in the exact spot where you died.

The developers’ intended experience can only be found by playing on Legend, but for the inexperienced, it may be better to start on Page mode or Squire mode to learn the basics, before gradually working your way up the difficulty chain. Even on Page, this game can be extremely difficult. 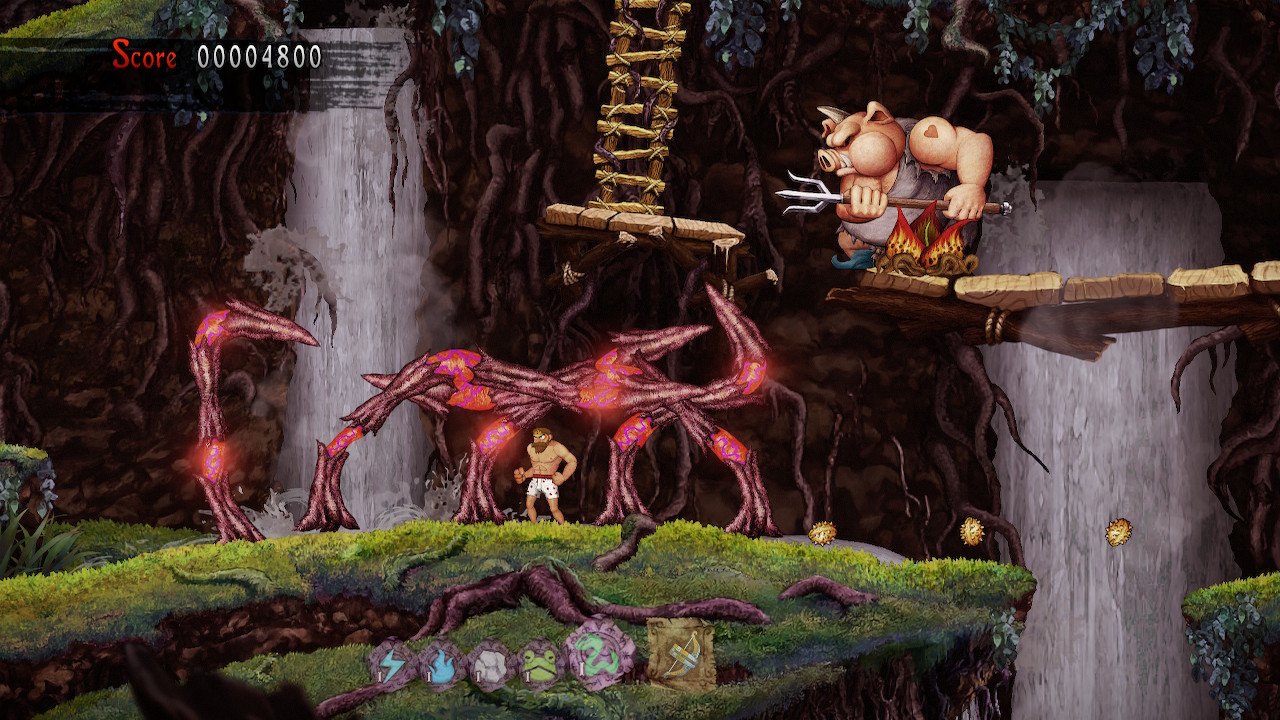 The story is simple. Arthur and the Princess are enjoying time lounging on a hillside when they witness their city being burned. While Arthur is watching the horror, one of the Demon Lord’s minions swoops in and kidnaps the Princess, forcing Arthur to fight his way through multiple levels of monstrous enemies and challenging bosses to rescue her.

Aside from a short cutscene with no dialogue at both the beginning and end of the game, there is no more story. Resurrection knows that players are there for a challenge and wastes no time throwing you into its wonderfully detailed hand-drawn world.

While the game maintains many of the original level layouts, they have been tweaked to include new challenges and more dramatic backdrops. The levels are rarely static, instead they are constantly shifting and falling apart, keeping players on their toes – as if dealing with the ridiculous amount of enemies wasn’t enough to worry about. It is all incredibly stressful to navigate, which is exactly what players expected from the series. 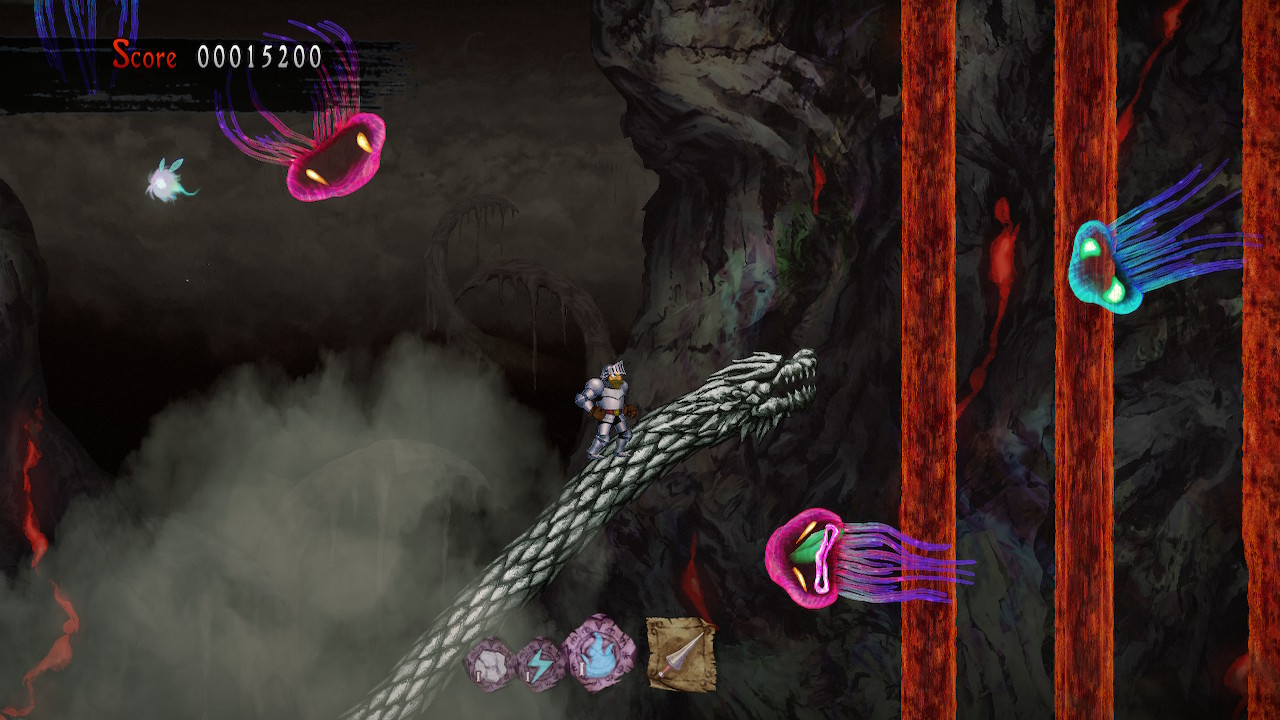 The most noticeable upgrade is the graphics. The original had a certain charm which the remaster retains while introducing a beautiful new hand-drawn style. Resurrection often feels like a playable cartoon and features amazing attention to detail, especially in the grotesquely designed bosses.

For those unaware of the gameplay, it is essentially a run and gun. Your only goal is to make it to the end of the level while a barrage of enemies assaults you from all directions. At your disposal is a number of weapons, including knives, javelins, firewater, boulders, a hammer, and a crossbow. While I appreciate the variety, I prefer using weapons that can be thrown as nearly every other item tends to put players at a disadvantage during many of the encounters. This is further complicated by Arthur only being able to hold one weapon at a time, at least until you use the Umbral Tree to unlock the ability to carry multiple weapons at once.

The world is divided into five zones, some with multiple levels to choose from. You only need to complete one level to advance to the next zone but can complete both if you want. At the beginning of your journey, you can choose to either start in the graveyard or the execution grounds. The graveyard is known by nearly every player as it is the first level in both the arcade cabinet and the NES version. It may have also been the only level most players ever experienced as getting past it required an insane amount of skill. 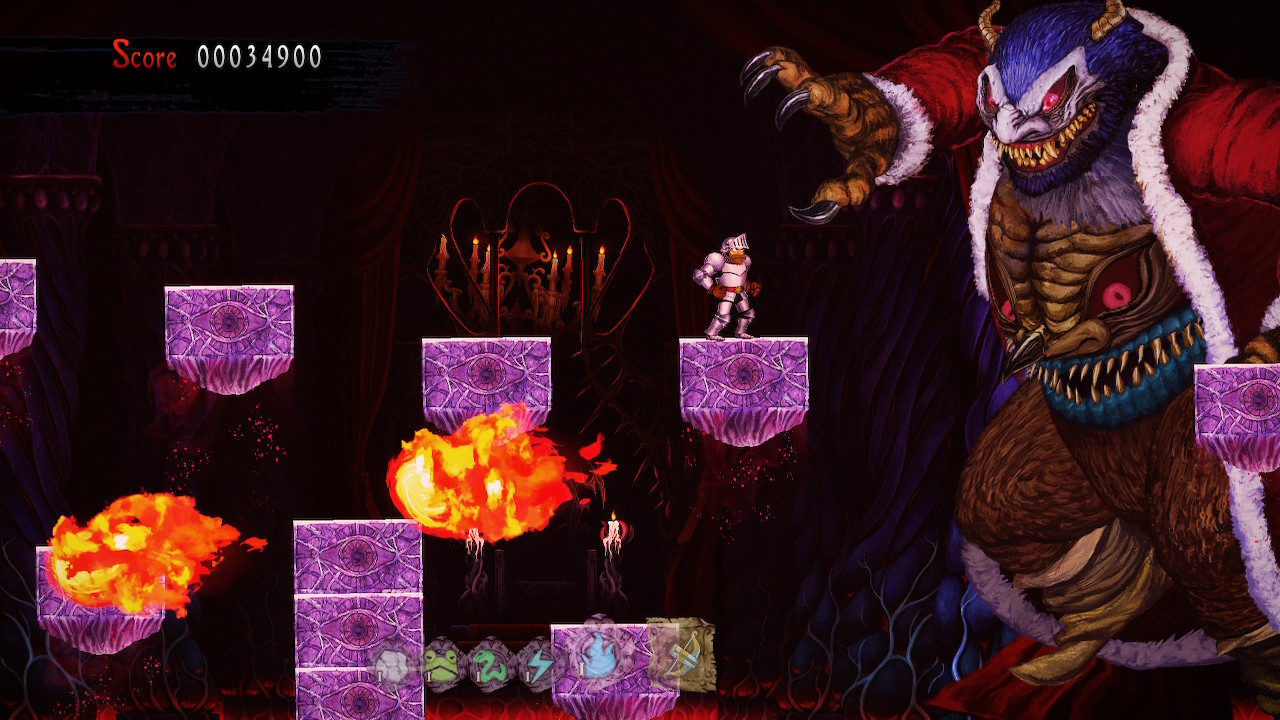 Levels are chaotic and you will die… a lot. Like Dark Souls, the only way to beat Ghosts ‘N Goblins Resurrection is to “git gud”. Or you can play on the page difficulty setting. No worries, I won’t judge you.

To help control the chaos this time around you are given access to a bevy of unlockable magic and skills. To equip magic or a skill you must purchase it using Umbral Bees which can be found hidden throughout each level. Once unlocked a skill is automatically usable or in the case of magic, can be equipped to your waistband. A word of warning though, some magic and skills are limited to difficulty levels. An example would be the Dead Arremer, which eradicates the Red Arremer enemies but can only be used by Pages, or the Treasure Eye skill, which shows players where treasures chest are located but cannot be used by those playing in Page mode.

While magic and the unlockable skills are not necessary to complete the game, they certainly help, especially on the harder difficulties. Among the magic and skills available are Thunderstorm, Emboulden (which turns you into a boulder, allowing you to run over enemies), Firewall, Transmogrifrog (which turns enemies into frogs), Doppelganger, Boxer Briefs (which triples the damage output from your first attack when you are one hit away from death), Kitted Out (which allows you to hold two weapons), Medusa (which turns enemies into stone), Armorend (which fully restores your armor),  Quick Cast, Resurrection, Umbral Net (which casts a net, catching all Umbral and Money bees on screen), and Quickening. 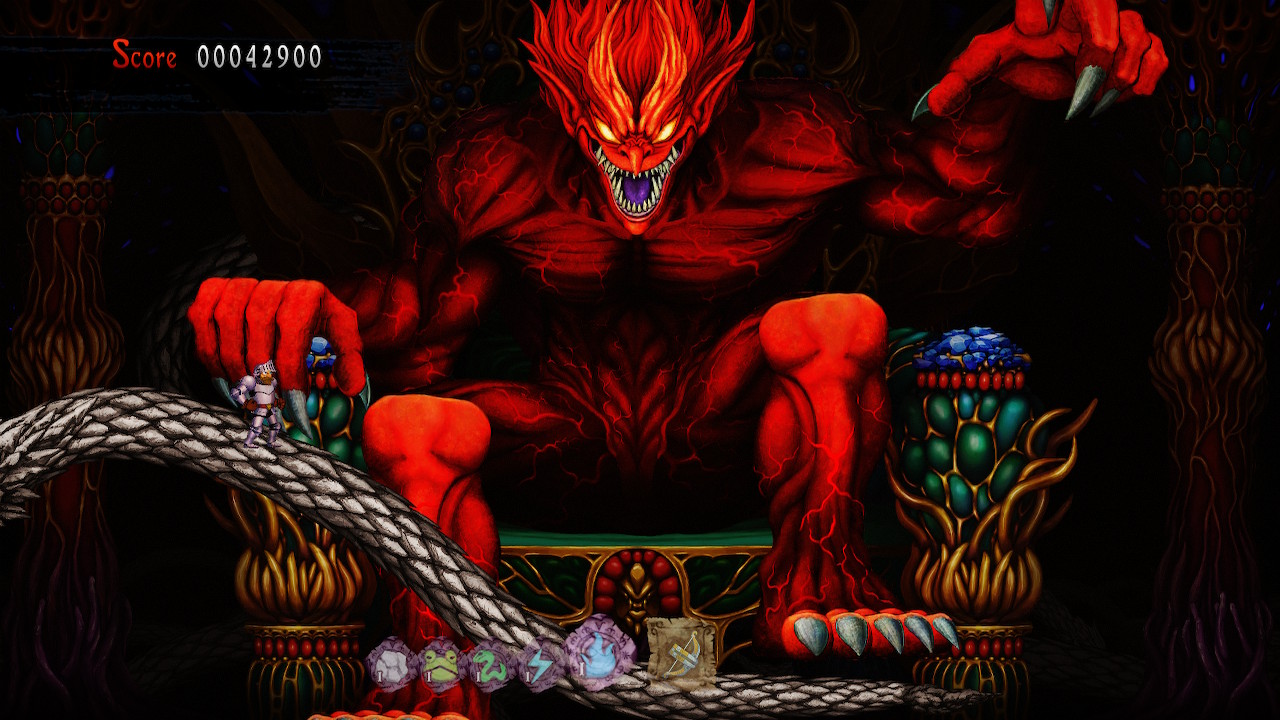 Unfortunately, a few remnants of the past still remain, including how ridiculously slow Arthur moves compared to enemies and the sometimes aggravating platforming, made worse by the slow movement. Thankfully, the platforming issues are few and far between, save for one incredibly frustrating area where you are jumping from a series of floating ledges while being attacked from all sides. Being hit while on a ledge is essentially a death sentence as Resurrection maintains the original knockback — which is the bane of all retro players’ existence. One hit can send you reeling off cliffs, ledges, or into enemies with no way to prevent it.

Another questionable design element is the fact that enemies can shoot through all obstacles and hit you, yet your weapons deflect off all surfaces. To call this cheap is an understatement. The amount of times you’ll die just because you are trapped near a wall and being hit from the other side, while you cannot fight back, is entirely too many for a modern game. 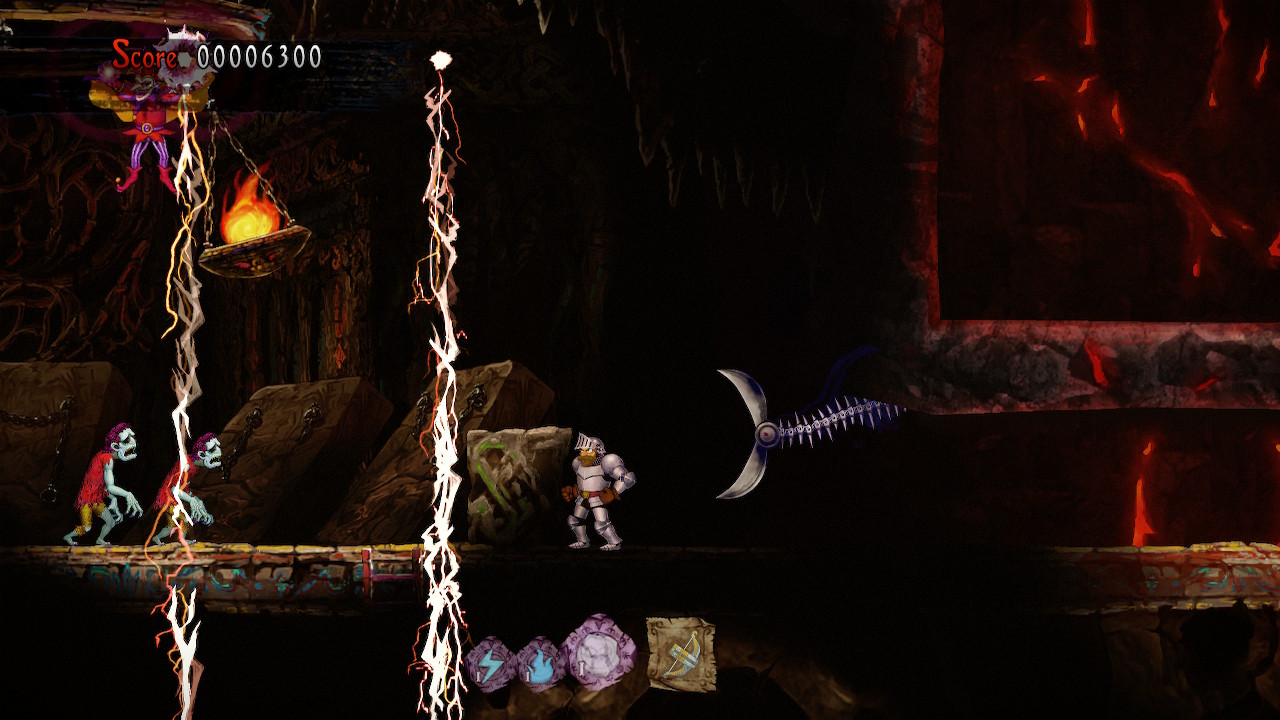 An average playthrough can take anywhere from an hour to, well, forever depending on your skill level. Page mode can be completed with a little perseverance, but Legend mode’s time to complete will solely be up to how skilled and patient a gamer is. There are tons of chests and Umbral bees hidden throughout and you will need to complete multiple playthroughs to unlock all magic and skills, so Ghosts ‘N Goblins Resurrection should keep most players busy for quite a while.

Ghosts ‘N Goblins Resurrection is a wonderful re-imagining of the brutally difficult iconic series. Featuring incredible hand-drawn animation and multiple difficulty levels to ensure that players of all skill levels can complete the game, this release will win over both old fans of the series as well as new players eager for a challenge.

Richard Allen is a freelance writer and contributing editor for various publications. When not writing for Gaming Trend you can find him covering theatre for Broadway World, movies and TV for Fandomize, or working on original stories. An avid retro gamer, he is overly obsessed with Dragon's Lair. Chat with him via @thricetheartist on Twitter and @richardallenwrites on Facebook and Instagram.
Related Articles: Ghosts ‘n Goblins Resurrection
Share
Tweet
Share
Submit