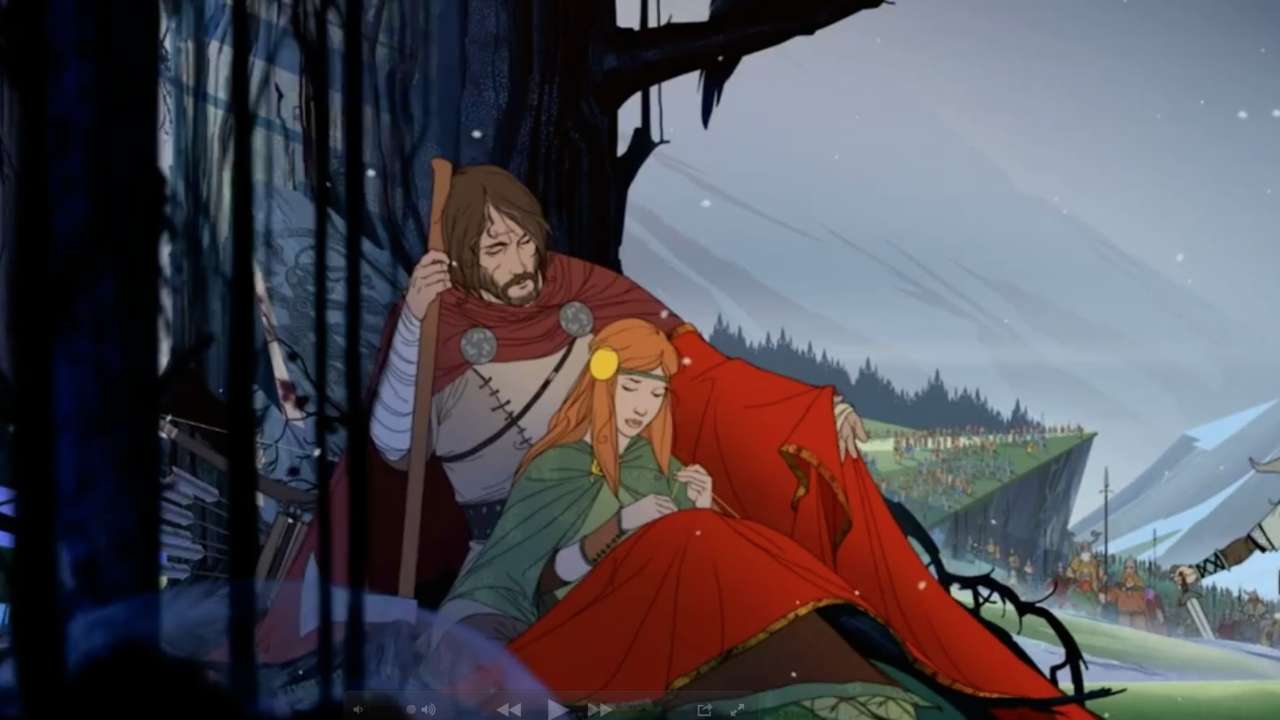 The Nintendo Switch launched in March of 2017. I played a bunch of action games, puzzle titles, and a few racers, but let’s face it — the Nintendo Switch was practically made for tactical games. Developer Stoic recognized the opportunity to bring their tactical title, The Banner Saga to life on Nintendo’s touch-screen console, which should come as no surprise given that it’s already on PC, PS4, Xbox One, iOS, Android, and Mac. Did they save the best for last?

Your sojourn is as difficult as it is long.

If you didn’t pick it up on other platforms, The Banner Saga tells the tale of Nordic world stuck in perpetual twilight. Rook, the leader of a Viking band, strikes out with a caravan to discover why the sun has stopped moving, and to uncover why an ancient race of creatures called the Dredge have returned to their world. As the game is helmed by three prior Bioware alumni, The Banner Saga is full of decisions, deep character interaction, and is coupled with a fantastic and diverging story path that I absolutely will not ruin for you here, beyond saying that you need to “unite the clans”.

If you are a fan of any turn-based title like XCOM, Battletech, or Final Fantasy Tactics, you are already familiar with the mechanics of The Banner Saga. Like XCOM, you’ll choose which of your roster to bring into battle, each with an initiative and move order. They also have special abilities tied to their class. Different than those other titles, the turns always alternate, even if your band is outnumbered. That is, until the final enemy is on the field. At this point, the game shifts into “pillage” mode. Each character then moves in order of their initiative, meaning you or your foes may act twice. Faster characters earn their stripes in this mode as they can dance around a slower enemy with impunity.

Combat is grid-based and fits perfectly with the portable Switch.

Attacks can damage either armor or strength. Armor weakens the foes ability to turn away damage, granting additional opportunity for health damage once that armor is weakened. On the other hand, breaking down an enemy’s strength can kill them outright, creating a good balance of attack planning when your foes are stronger.

One of the best parts of The Banner Saga is that there is no possible way that you can predict the outcome of your decisions. As you trek across the landscape, you’ll frequently be given moral predicaments or conversation decisions that will have far-reaching effects. In true Bioware-esque fashion, the only choices you truly have is to follow your gut, only here it seems there are more hardships than happy outcomes.

Your heroes provide some solid RPG and upgrade elements.

Each day hiking uses up supplies, and running out means starvation. Resting to heal your troops cost supplies. Slowing your caravan to allow stragglers to catch up costs you supplies. Nearly any decision you make costs supplies, and there never seems to be enough to go around. This tight control over economy forces tough decisions, tempting you at every corner. For example, if you are nearly starving and you meet a random bunch of fighters on the road who promise to show you a nearby area where you might resupply, you are faced with a choice — trust them to add more forces to your caravan and hope they are being truthful about the supplies, or turn them away to ensure the existing members of your band stay safe, despite their rumbling empty bellies.

The load times on the Switch, whether docked or undocked, clock in at a second or less, making this a perfect game to take on the go. Similarly, you can use the thumbsticks to select your move positions, but touching the square where you’d like to move is just as valid. It’s not as precise as a mouse, occasionally getting fidgety with character placement using the thumbsticks, but the combination of screen and sticks accomplishes the tasks fairly well.

The visual style is gorgeous.

I simply cannot speak highly enough of the art and authentic voice work in The Banner Saga, and both translate beautifully to the portable screen of the Switch. The animations are excellent, reminding me of old school Rankin and Bass movies like The Hobbit, and that’s high praise indeed. This extends nicely from combat to cutscene, showcasing beautiful vistas that look foreboding and cold in which your ill-fated band must trek. During fights, enemies are staggered by deflected shots, knocked back by axe swings, and bang their shields in protest of your advances. These little things make the battlefield feel alive, and add a great deal of character to the game.

There is one rough edge on the Switch version of the game — undocked, the choice of fonts that spell out what a building is used for can be hard to read. The words are wrapped over the top of the building in a font that looks like it might have been carved from a single chunk of white wood. On the go, these can look like spiderwebs on the roof until you zoom in with the ZL and ZR buttons.

Sometimes it can be a little hard to make out the text in scenes like this.

At roughly 15 hours long, The Banner Saga is a fantastic tactical RPG for the Switch, and with the second and third game coming, we’ll be able to see all of the painful decisions we’ve made across the trilogy come to fruition, for good or ill.

With agonizing decisions in an unforgiving Viking-inspired setting, The Banner Saga mixes strategic gameplay with choices that truly matter. At $19.99, it’s easily one of the best tactical titles on the Nintendo Switch.

Ron Burke is the Editor in Chief for Gaming Trend. Currently living in Fort Worth, Texas, Ron is an old-school gamer who enjoys CRPGs, action/adventure, platformers, music games, and has recently gotten into tabletop gaming. Ron is also a fourth degree black belt, with a Master's rank in Matsumura Seito Shōrin-ryū, Moo Duk Kwan Tang Soo Do, Universal Tang Soo Do Alliance, and International Tang Soo Do Federation. He also holds ranks in several other styles in his search to be a well-rounded fighter. Ron has been married to Gaming Trend Editor, Laura Burke, for 21 years. They have three dogs - Pazuzu (Irish Terrier), Atë, and Calliope (both Australian Kelpie/Pit Bull mixes).
Related Articles: The Banner Saga
Share
Tweet
Share
Submit