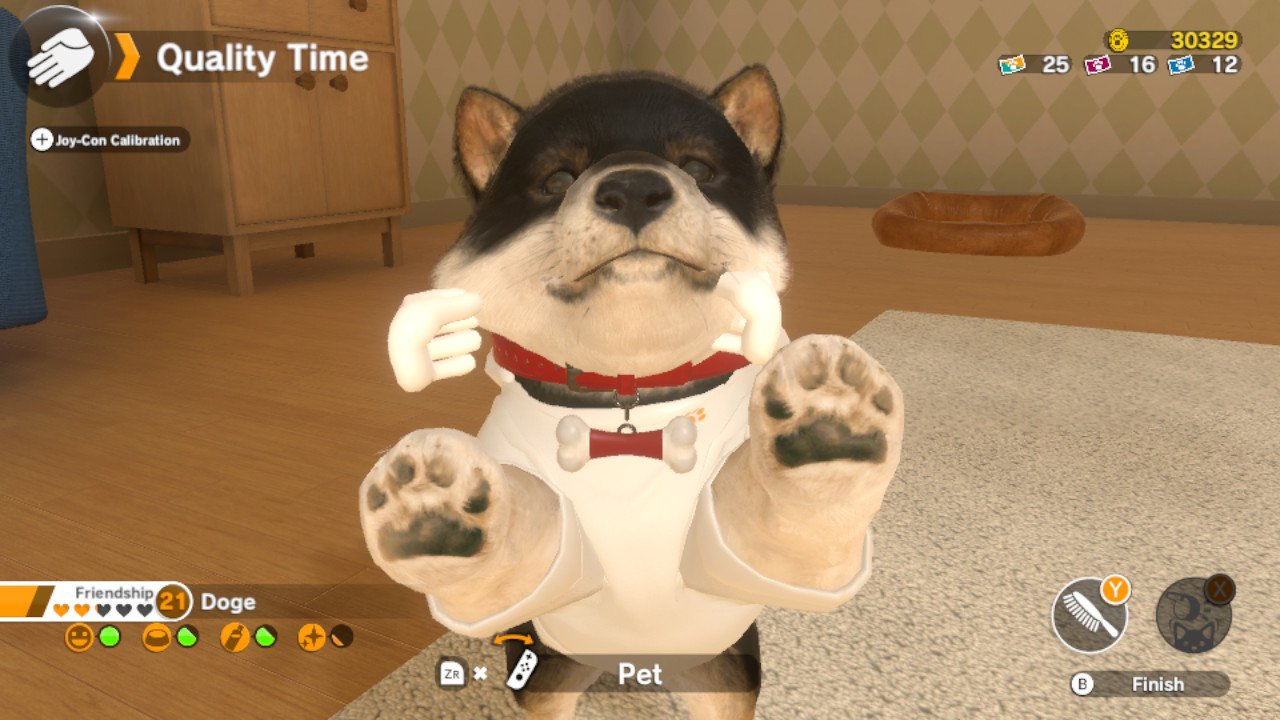 Whether it be Tamagotchi or canine sidekicks, pet simulators are always a fun way to chill out. While they do end up having a dearth of activities to do after a while, they’re still fun for short play sessions (even if I feel like I’m neglecting my virtual pets). Little Friends: Dogs & Cats brings a Nintendogs-esque pet simulator to the Nintendo Switch, and while it feels a bit shallow for the asking price, it should scratch the itch of the casual dog or cat raising crowd. 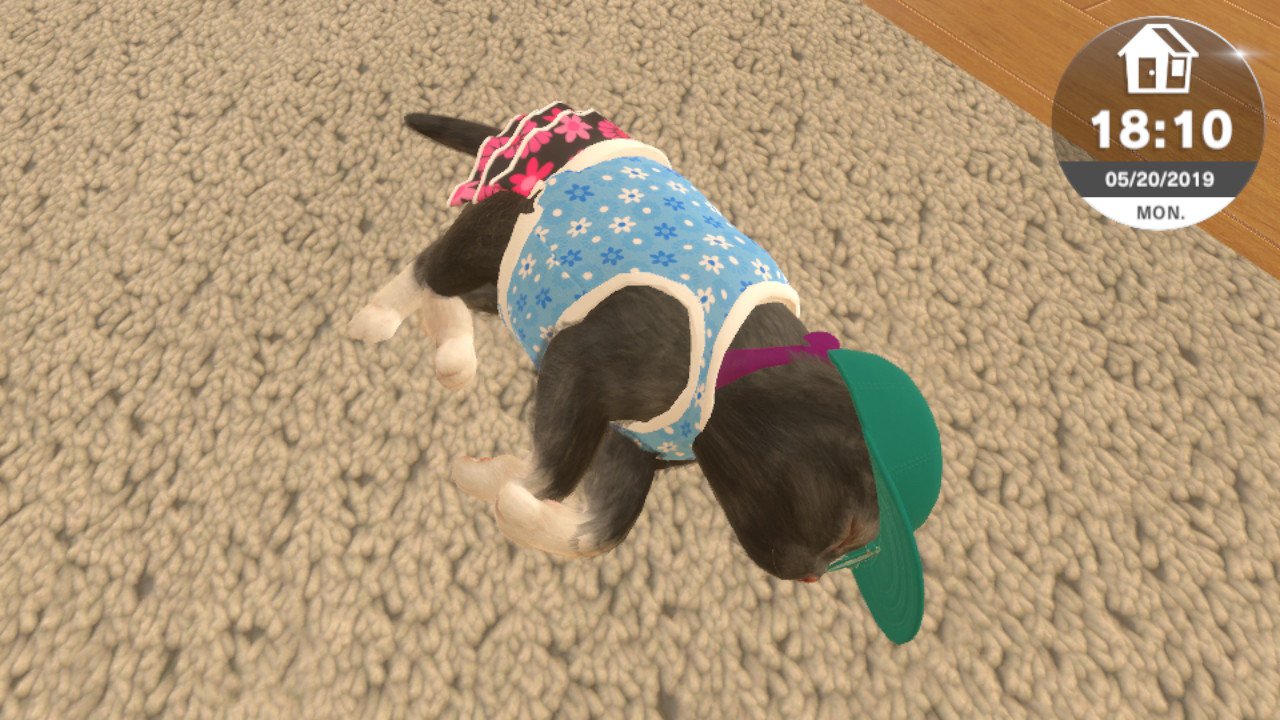 Little Friends puts you in charge of a variety of dogs and cats as you raise them to be cute and adorable pets. Initially, you’re only given the choice of selecting dogs, but the option to adopt cats is available after you reach level 15 friendship with your first dog. You can do this by spending quality time with them via petting and giving them food. You’ll have to keep your eye on four different meters on the bottom left of the screen (which indicate happiness, hunger, thirst, and cleanliness), but these can be easily refilled with some tender loving care. However, these meters can be depleted just as quickly, so you’ll want to check back on your pets every day to see that they’re happy and fed. It’s like a real dog or cat!

Aside from the indoor mechanics, you can also take dogs out for walks and participate in disc throwing competitions, where you can throw Frisbees… erm, flying discs in order to take the top spot. By spending time with your pets, you’ll gain coins and different colored tickets that you can use to purchase food, accessories, and furniture in your virtual pad. With your earned currency, you can also dress up your pets however you see fit, though more accessories will unlock once you progress with your care. While I wish there was more in terms of customization (you can also decorate your house with different themes and furniture, but it’s pretty basic for the first few days), there was enough there to keep me going back. It’s a rather streamlined approach to pet care that fans of the Nintendogs franchise will know and love. 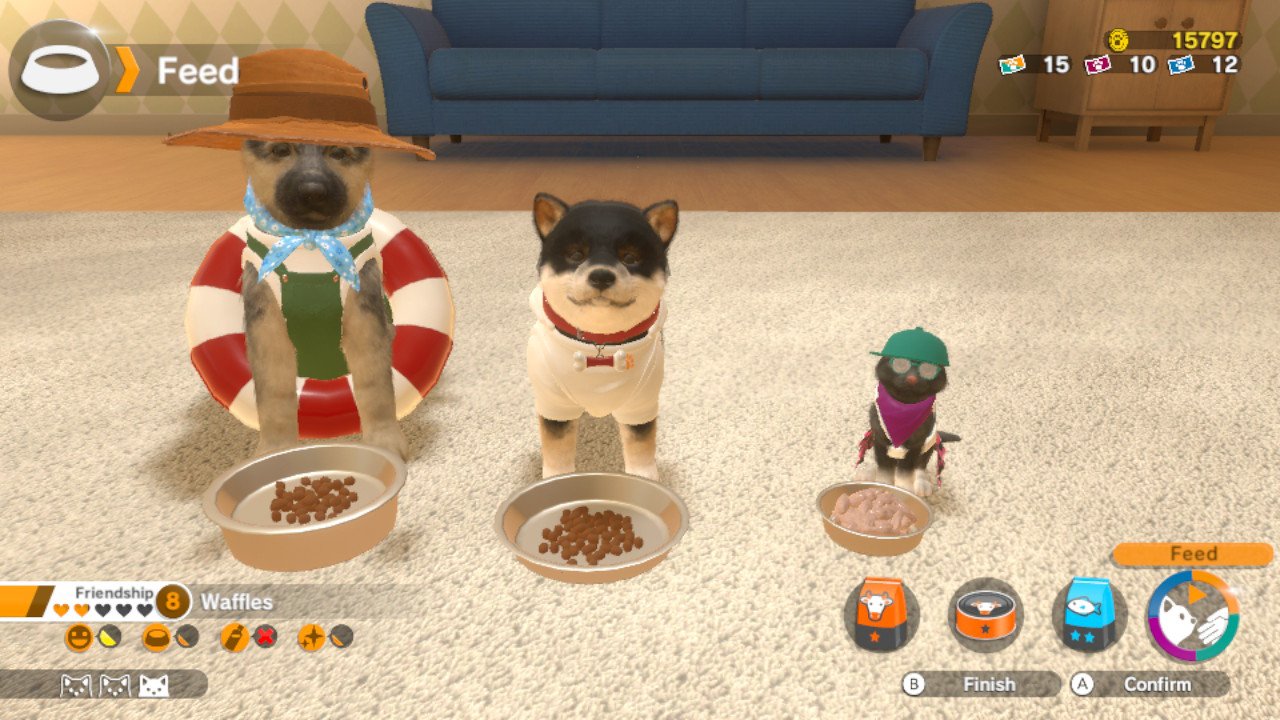 While the Nintendogs games had the added benefit of the DS microphone to help with behavior training, Little Friends has motion controls with Joy-Con (though you can play this portably with the touchscreen too). All in all, it works pretty well, as you can use the Joy-Con to fling a flying disc around, wave a cat wand, or even use it to pet your animals. (To the “Can You Pet the Dog?” Twitter account, yes, you can pet the dog.) All of it works pretty well in practice, and I actually had more fun waggling my Joy-Con than playing the game through the traditional handheld method. While it does make some actions like petting a bit longer to execute, the novelty of handling my dog or cat was fresh and exciting.

On the dog side of things, the activities are basic yet entertaining enough to do at least a few times. Your walking route consists of leading your dog around the area that your house is in; while it’s a glorified round course, it’s unlikely that you’ll see all of it in one go. You can also lead your dog to mark signposts, dig up treasure, or stare longingly at different statues scattered around the course. Other than walking, you can also sign up your dog to either catch discs casually or participate in competitions, which means you’ll be up against other competitors in order to get the most points by catching discs. These can get tricky at higher difficulties, but they wield some great rewards if you can attain first place. 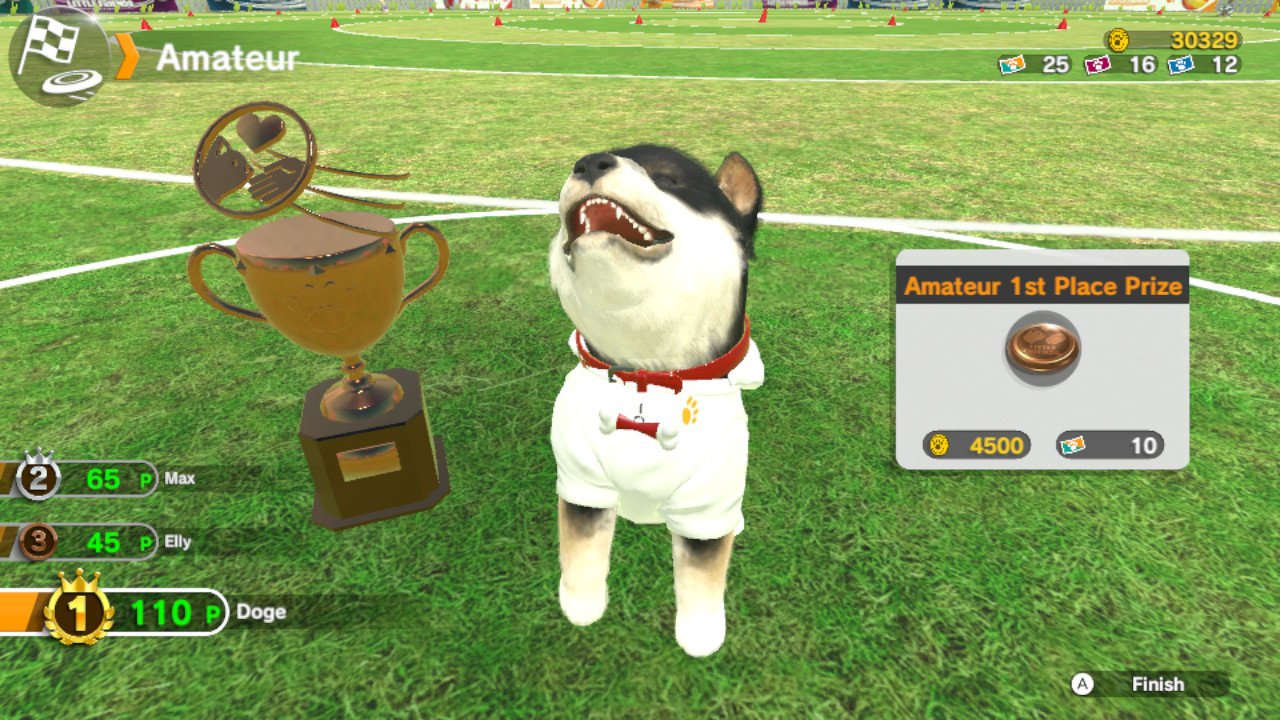 I’m going to say this outright, but if you’re looking for a game mostly about raising cats, you should skip Little Friends entirely. Much like Nintendogs + Cats, the latter is relegated to staying in the house for the entirety of their existence. You only get a handful of cat breeds to choose from, and you can’t even get the option to initially start out with a cat; you’ll have to spend time with a dog first. That said, it’s not like you really want to spend your time exclusively with cats, as Little Friends seems to have been made with canines in mind. Even playtime indoors seems biased towards the dogs, as your cat really just paws at balls or bones while dogs will catch them and return them to you. I understand that cats are more independent and less likely to obey owners, but I would either give them more things to do or just excise the animals entirely.

This lack of activities means that it’s not advisable to spend hours on each play session, something that the game discourages as you can only gain 10 friendship levels a day. You can rack this up pretty easily, so I’m guessing it’s more a design choice to get you to tend to your animals for a few minutes daily rather than having a hardcore cuddle session every week. It’s reminiscent of Imagineer’s other recent work, Fitness Boxing, which is great if you want a daily workout, but not for much else. Doing this daily grind makes the experience a bit more zen-like, and it does have its appeal much like Animal Crossing or The Sims. However, the game as a whole feels a bit shallow and unfulfilling and lacks some qualities of the aforementioned titles to fully engross you into the experience. 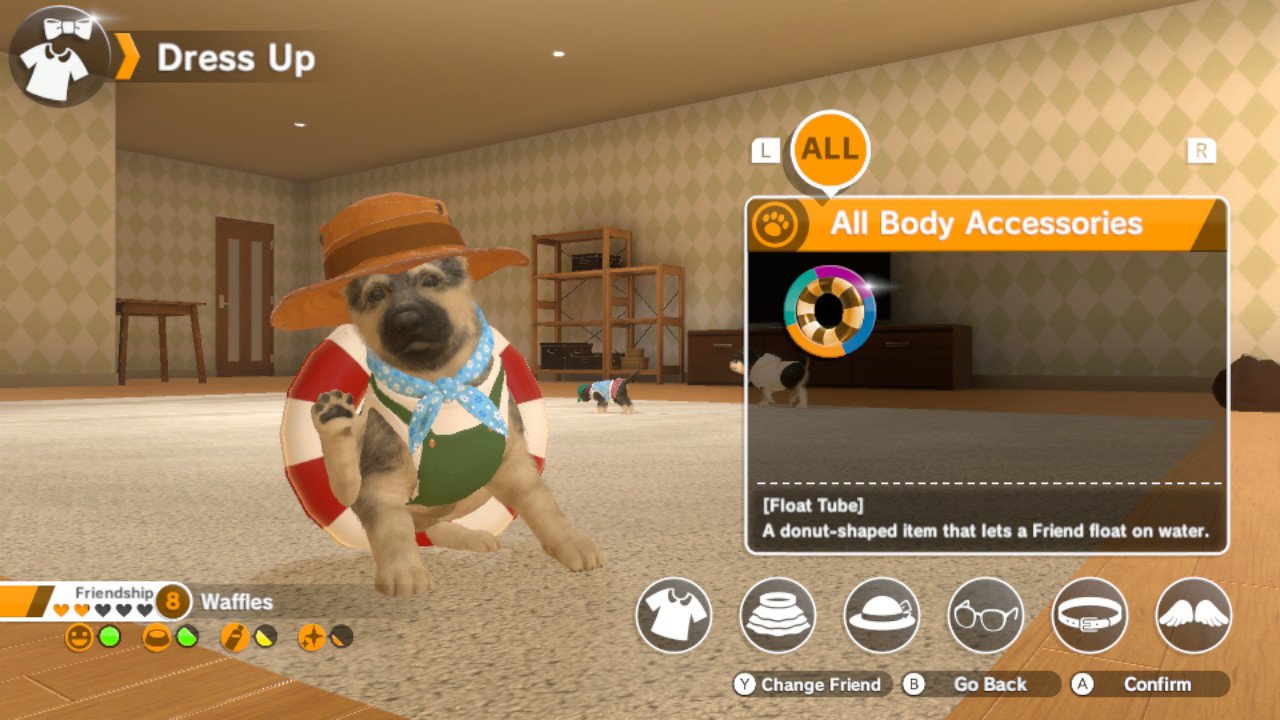 In terms of performance, Little Friends works adequately, with no real technical issues or slowdown. The graphics aren’t groundbreaking, but it does feel like an upgraded version of Nintendogs, so the animal models are detailed and emotive. I certainly adored the Shiba Inu I adopted (I named him Doge for obvious reasons), and I felt pretty warm and fuzzy every time I pet him. The other parts of the game look alright for a game of this caliber, and while it’s nothing memorable, it gets the job done. The soundtrack is sparse but helps move the game along, and it’s relaxing to listen to after a hard day of work.

Little Friends: Dogs & Cats is a game that will appeal to animal lovers who miss the days of Nintendogs. While it does have some adorable breeds and some cute customization options, it won’t appeal to those that want to take care of their pets for long periods of time.

Elisha Deogracias is an aspiring accountant by day, freelance writer by night. Before writing for Gaming Trend, he had a small gig on the now defunct Examiner. When not being a third wheel with his best friends on dates or yearning for some closure on Pushing Daisies, he's busy catching up on shonen manga and wacky rhythm games. Mains R.O.B. in Smash. Still doesn't know if he's a kid or a squid.
Related Articles: Indies, Little Friends: Dogs & Cats
Share
Tweet
Share
Submit