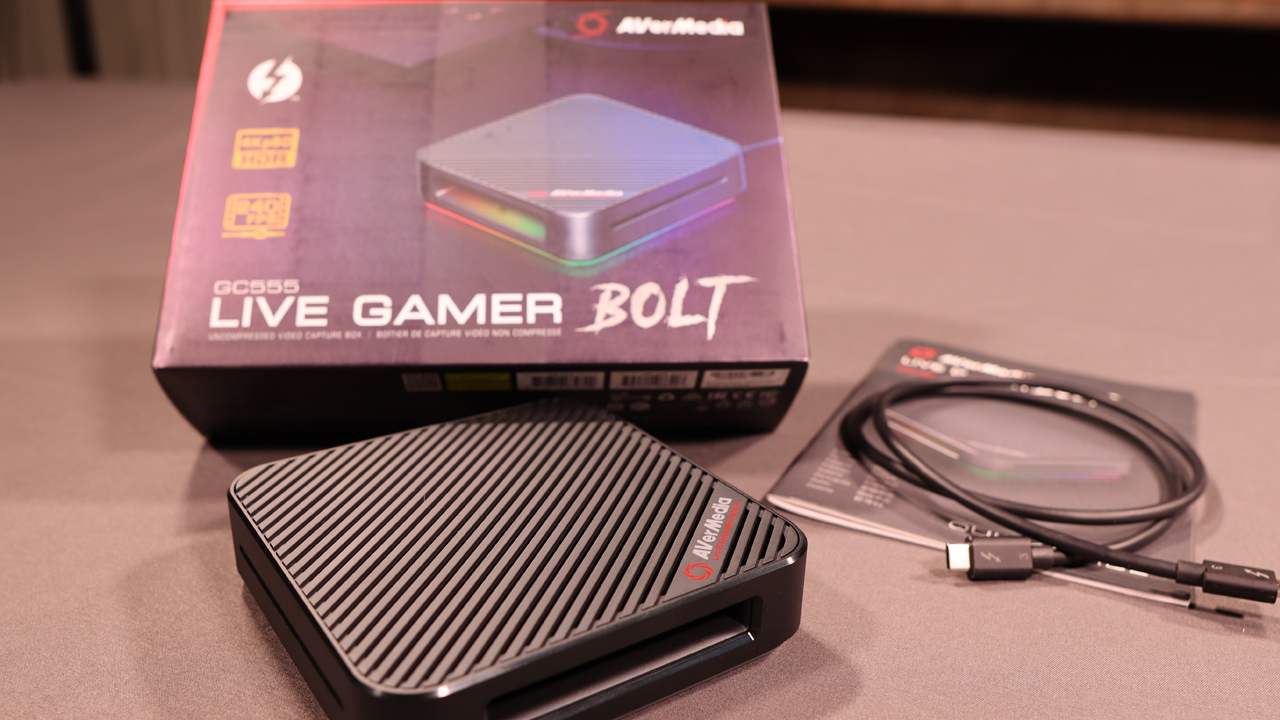 AVerMedia has been fueling our captures for a few years now. Ultra reliable and easy to use, they let us capture high resolution video with rock solid framerates. The Live Gamer Ultra (our review) gave us portable 4K capture at 30fps and 1080p at 60fps, whereas the Live Gamer 4K (our review) gave us 4K capture at 60fps with high dynamic range lighting (HDR), but required installation in a fairly beefy machine, losing the portability advantage. With the AVerMedia Live Gamer BOLT, the team has combined the two devices into one, delivering 4K resolutions at 60fps with full HDR10 support, as well as a few new tricks up its sleeves. Let’s dive into the data stream and unbox this beast.

Like we did with the two previous device reviews, let’s dive in with the system requirements first.

Generally speaking, other than the Thunderbolt 3 requirement, if you can run something in 4K, you can handle the requirements of the Live Gamer BOLT. For reference, the following captures were pulled using the Razer Blade 15 (2020) (our review) since it (like most freshly-released 20XX/RTX-based systems) has a Thunderbolt 3 port.

The rear of the Live Gamer BOLT is uncomplicated by a ton of ports. There are HDMI 2.0 in and out ports, a 3.5mm line in for an external microphone or mixer, and the aforementioned Thunderbolt 3 port. No external power is needed as all of the connectivity and juice required are supplied via said Thunderbolt 3 port. It does mean that you may need a closer look at your motherboard to see if you have a Thunderbolt 3 port, or at least a header to install an add-in card like this one.

Popping the hood on the Live Gamer BOLT, we see that it has a number of capabilities beyond just the impressive 4K/60/HDR10 top end. While previous cards and devices could hit 1080p and 120fps, the Live Gamer BOLT says that’s not enough, doubling it. They’ve even got you covered in the middle, handling 1440p with 144fps. If you’ve ever played a game like Rocket League, Overwatch, or any other competitive title at 144fps or better, it’s hard to go back — frames make games, as they say. In fact, the Live Gamer Bolt tops out at a blistering 240fps of capture power at 1080p. The only hitch, of course, being that YouTube, Vimeo, and other video hosting sites currently do not support either 240fps or 120fps, chunking it down to 60fps. Let’s hope that the next generation of game consoles push YouTube to update their systems to support these new refresh rates.

Certainly you are able to stream via OBS or XSplit, but RECentral 4, AVerMedia’s free capture software, is the best way to grab footage. After a quick update, a new HDR toggle appears, along with support for the BOLT and added functionality to record 4K/60 while still streaming at 1080p/60fps.

As always, the AVerMedia Live Gamer BOLT comes with a copy of CyberLink PowerDirector 15. Certainly it would have been nice to get up to CyberLink PowerDirector 18, but the most current version (PowerDirector 365) is a subscription-based platform, so I’m just grateful for something that isn’t an annual poke in the eye. I used PowerDirector for years, and it serves nicely as a good alternative to Adobe, though it’s not going to give you advanced effects like After Effects. Still, for basic editing it does just fine.

Aesthetically, the BOLT is a very simple design. Rounded edges on a black plastic surface, the device sports a large slot in the front where you can see LEDs that pulse or ‘breathe’ based on what the device is doing. Intuitively, pulsing red means recording, slow flashing blue means streaming, fast flashing red means your disk is almost full, flashing blue means the device is updating, whereas solid red means the disk is full, and flashing red means there is some sort of error. Beyond lighting, there is a quiet fan that keeps the device fairly cool and nearly silent — not that you’ll be juggling it while you capture. The simple and sleek design makes it easy to throw into a backpack if you have one of the new light and slim laptops. Without having to plug it into external power, we are squarely back in portable capture territory.

Throughout this review you’ve seen capture performed on the device. It may be difficult to see (and that’s a good thing), but the latency for the pass-through video or on-screen preview is less than 50ms. Given just how much data is flowing through the device and how quickly it’s being processed, that’s all but unprecedented. There are other external devices that can handle that sort of speed and latency, but those require external power supplies, are inordinately complicated, and in most cases nearly twice the price.

Speaking of price, the Live Gamer BOLT isn’t what I’d call “entry level”. At $449, the device’s price is commensurate with what it’s able to deliver. Comparatively, the Live Gamer 4K is $229.99, and the Live Gamer Ultra comes in at $249. Still, abstracting the load away from the PC, making it simple to use, and then powering it all through a single cable makes the premium look pretty great.

Ron Burke is the Editor in Chief for Gaming Trend. Currently living in Fort Worth, Texas, Ron is an old-school gamer who enjoys CRPGs, action/adventure, platformers, music games, and has recently gotten into tabletop gaming. Ron is also a fourth degree black belt, with a Master's rank in Matsumura Seito Shōrin-ryū, Moo Duk Kwan Tang Soo Do, Universal Tang Soo Do Alliance, and International Tang Soo Do Federation. He also holds ranks in several other styles in his search to be a well-rounded fighter. Ron has been married to Gaming Trend Editor, Laura Burke, for 21 years. They have three dogs - Pazuzu (Irish Terrier), Atë, and Calliope (both Australian Kelpie/Pit Bull mixes).
Related Articles: AVerMedia Live Gamer BOLT, Hardware
Share
Tweet
Share
Submit