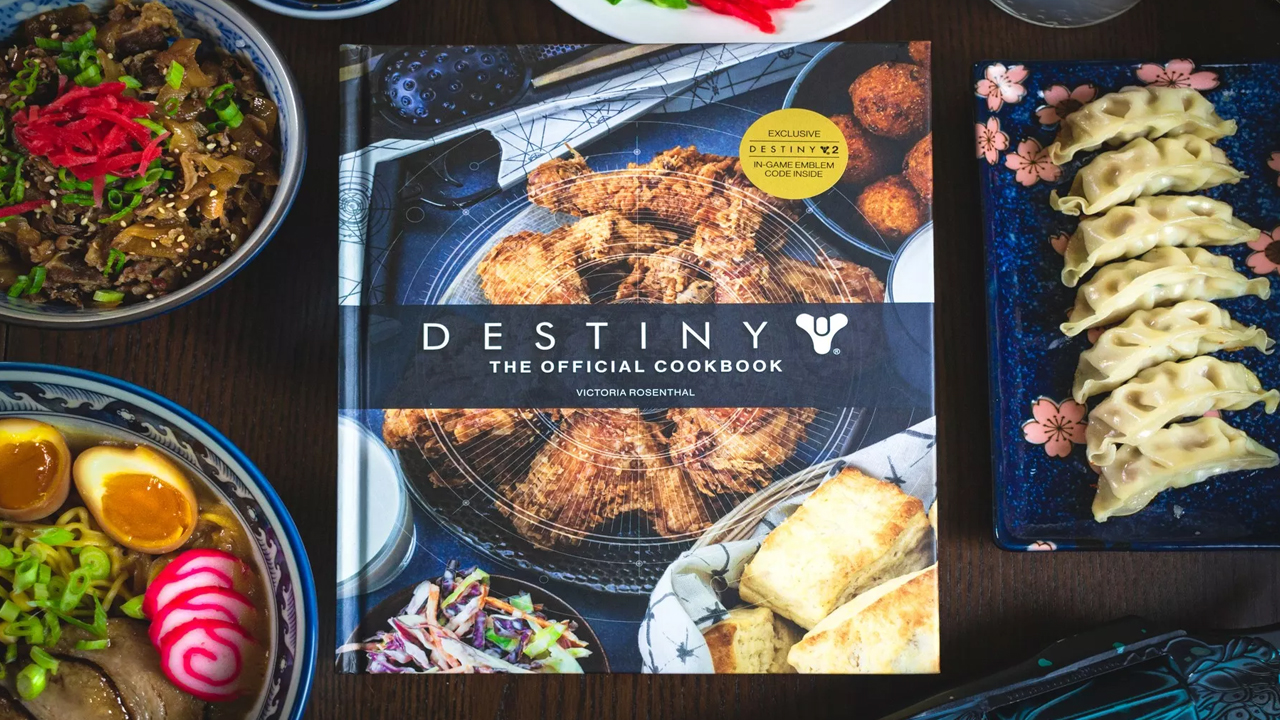 We’ve been tackling videogame cookbooks for a bit now, and it’s made for some amazing meals like the Orsimer Venison in the Skyrim cookbook, the occasional odd loaf that was more birdseed than bread (again, looking at you Skyrim), had some badass ramen from Overwatch, and even snacked like Jedi with Kat’s Kettle Corn from the Star Wars Galaxy’s Edge cookbook. Now it’s time to head back to the stars to get a taste of something from Destiny: The Official Cookbook.

The introduction of the book is “penned” by Guardian Outfitter Eva Levante. As the Tower is the last bastion of humanity, it makes sense that, like Overwatch, the Destiny cookbook has more foods that you could conceivably make frequently. You might classify these as “comfort foods” offering up fare like pita bread, chicken-fried steak, smoked turkey legs, and gyoza.

Doing some reverse engineering from the storyline sprinkled throughout, it looks like this book takes place somewhere around Season of the Drifter, aka “Joker’s Wild”. As such, we get recipes from Ikora Rey and Osirus, Amanda Holliday and Zavala, Devrim Kay and Suraya Hawthorne, Ana Bray and Camrin Dumuzi, The Drifter, and the late Cayde-6.

The book kicks off with an ingredients guide. The hunt we had to embark on for previous books led us to some very strange corners of the Internet to obtain the items we’d need for some of these foods. Here, the ingredients are more common, such as Miso, Nori, Queso Asadero, Crema Mexicana, and Ancho Chile. There are a few oddballs like Diastatic Malt Powder, Kombu, and Sichuan Peppercorns, but none of it was out of reach by any stretch.

The next section of the book goes over the preparations you’ll need to create compound ingredients like Shichimi Togarashi, which is actually comprised of two zested oranges, the aforementioned Sichuan peppercorns, black peppercorns, black and white sesame seeds, nori, and garlic powder. These compound ingredients are sorted by difficulty, prep time, what recipes use it, and a cross-reference of how much all of the ingredients combined will yield.

Unlike traditional cookbooks, you’ll need to have a bit of forethought before embarking on one of these recipes. While the ingredients aren’t all that uncommon, most will require a compound concoction, and almost all of them have at least one ingredient that likely won’t be sitting in your pantry. This isn’t a book you just thumb through on a spur of the moment and a meal comes out the other end.

My wife is a Le Cordon Bleu graduate, so she knows food in a way I could never understand. As such I put her to work checking out all of these books. She selected two recipes to prep, pork tenderloin, and bulgogi burritos, and she decided to do it on camera. Enjoy!

From the ingredients I mentioned, it’s very clear that there is a great deal of Korean, Vietnamese, Japanese, and American influence in this book. They are all very accessible recipes, requiring that you pay attention to the steps, but not without introducing complex techniques. Each recipe is preceded by a short paragraph explaining why Eva recommends this particular entry. Similarly, there are introductions to each chapter talking about what it’s like to live in the Lost City, what kind of food you’d find at The Crucible, or even how you might warm your stomach at the Farm. It’s all well done, and lines up perfectly with the ongoing lore of the Destiny universe.

One of the things my wife and I liked most about this cookbook was that the recipes didn’t just cover main entrees, but also some side dishes, desserts, and even drinks. It’s quite possible to build an entire meal from start to finish, and all within the pages of this one book.

Author Victoria Rosenthal has given us another amazing cookbook, partnering with Insight Editions as publisher. An accomplished chef in her own right, her recipes are focused on videogames and the food we might find in them. It helps expand the lore of the worlds we inhabit, and this book is no exception.

The Destiny: Official Cookbook is filled from cover to cover with amazing comfort foods, delicious drinks, and tasty dessert recipes to cap them off. Whether you are a massive Destiny fan, or a casual player looking for some delicious dishes, this book is for you.

Ron Burke is the Editor in Chief for Gaming Trend. Currently living in Fort Worth, Texas, Ron is an old-school gamer who enjoys CRPGs, action/adventure, platformers, music games, and has recently gotten into tabletop gaming. Ron is also a fourth degree black belt, with a Master's rank in Matsumura Seito Shōrin-ryū, Moo Duk Kwan Tang Soo Do, Universal Tang Soo Do Alliance, and International Tang Soo Do Federation. He also holds ranks in several other styles in his search to be a well-rounded fighter. Ron has been married to Gaming Trend Editor, Laura Burke, for 21 years. They have three dogs - Pazuzu (Irish Terrier), Atë, and Calliope (both Australian Kelpie/Pit Bull mixes).
Related Articles: Culture, Destiny: The Official Cookbook
Share
Tweet
Share
Submit