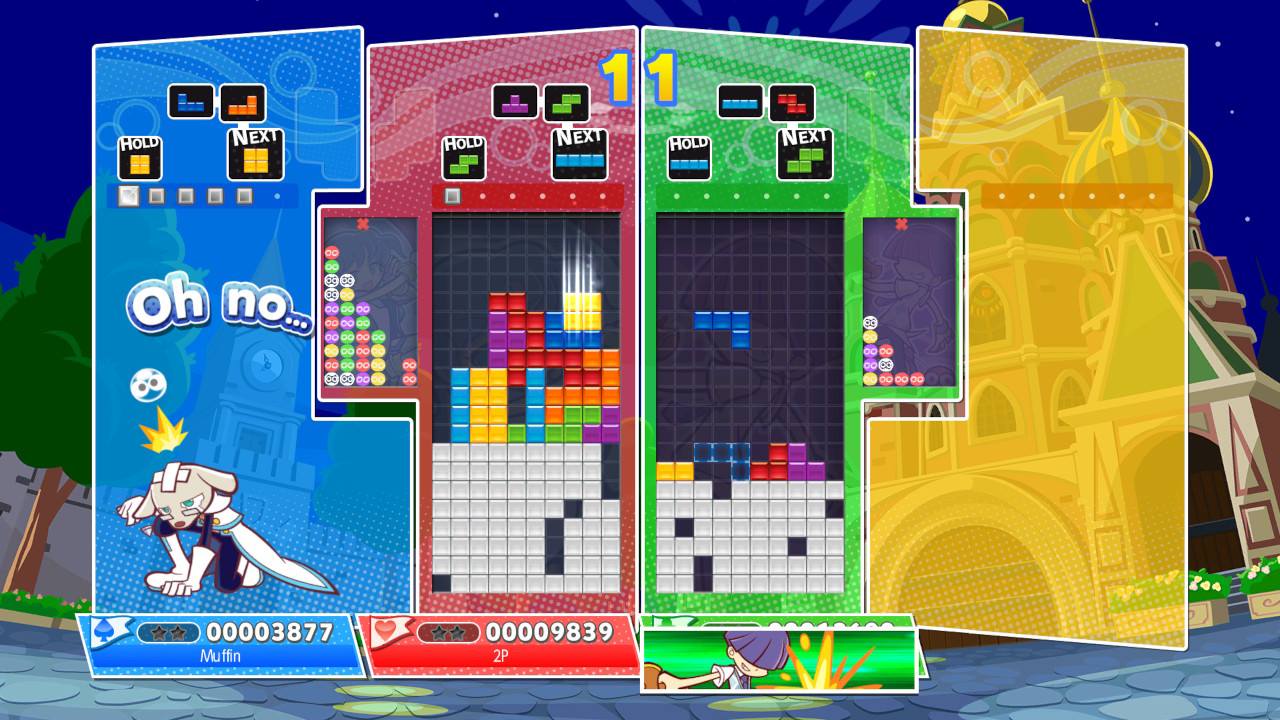 Tetris has been a popular franchise in the west for decades. There have even been psychological studies done on the effects of Tetris on the brain. In japan, however, the competitive puzzle game series Puyo Puyo is almost as popular. But, what happens when you combine the beloved Tetris franchise with the complexity of Puyo Puyo? The answer is simple: you create a marvelous blend of two unlikely friends in an unexpected way.

For the unfamiliar, Tetris is a puzzle game where you arrange falling blocks of various shapes to clear lines. Primarily played solo, Tetris does have a versus mode where clearing more lines at once creates more “junk blocks” to appear on your opponent’s screen. If their blocks reach the top first, you win. Puyo Puyo works similarly in versus mode, but that is the focus of the game. You have droplets, or, “Puyos”, falling and if four of the same color touch, those Puyos pop. As you chain Puyos to clear other Puyos, more junk will be added to your opponent. Just like in Tetris, the first person to fill their screen to the top loses.

For those that wish to play solo, Puyo Puyo Tetris offers several single player challenge modes. Each of these modes could be seen as ways to help you become a better Puyo Puyo or Tetris player. Endless Fever gives you preset Puyo blocks and your goal is to figure out where to place your falling Puyos to clear the screen. This helps you learn how to activate proper “triggers,” or, clear a certain Puyo set to create a chain. You can also play Endless Puyo mode or Tiny Puyo (half the size, twice the Puyo!) to learn how to set up chains or see how long you can survive.

Tetris, unfortunately, doesn’t have its own fever mode to select in the challenges list. You have the options to see how fast you can clear a certain set of blocks, or see how high you can get in a short span of time, but those are the only options you’ll have for solo Tetris practice.

Finally, you have an Adventure mode. In this mode, you go through a story of two worlds, Puyo Puyo and Tetris, colliding as you take on a multitude of challenges or face CPUs in story-based battles. These scenes are charming when they aren’t dragging on for too long. Unfortunately, the voices of the characters can seem a bit grating, especially when they repeat their same-tired phrases every match.

The heart of Puyo Puyo Tetris is its competitive multiplayer. In standard versus, you and your opponent (or CPU, if you prefer) choose to play either Tetris or Puyo Puyo. The junk blocks sent to the other player are translated into that player’s game, including their appearance. The junk will look like a Tetris, or Puyo Puyo junk block, arranged in the game’s standard.

Versus mode has a balance problem between Tetris and Puyo’s junk blocks. When junk is sent to Tetris, it’s sent underneath. This hardly affects your strategy for clearing tetriminos. However, Puyo Puyo players receive junk blocks raining from above. This covers your Puyos, and sometimes your trigger. You can’t use the junk to clear other Puyos like you can with Tetris; you have to clear Puyos next to the junk. While this can lead to chain opportunities if you’re clever, it’s much more difficult for beginner players to keep up with a Tetris player of the same level.

Puyo Puyo Tetris isn’t just for one game vs another. There are several game modes taking advantage of the crossover status. My personal favorite is Swap. In swap, both players start playing the same mode and the game randomly chooses Puyo Puyo or Tetris at the start. After 25 seconds, the game will switch to a board with the other mode. When you switch back, you will continue where you left off. The first one to fill either of their games to the top loses. An interesting strategy is to do a “swap chain,” which is to set up a piece to fall and set off a chain or a Tetris when you swap and start a new chain in your new mode. This will reward you with a shower of junk for your punished opponent.

Fusion mode brings its own twist of both games. Puyos and Tetriminos fall as you create chains with Puyos and clear lines with tetriminos. Tetriminos have the benefit of destroying the junk sent by the other players. The most interesting twist to strategy is that the chains are determined by how fast you clear your pieces rather than how many you can clear in a row.

Big Bang and Party aren’t as thrilling. In Big Bang, you choose either Tetris or Puyo Puyo and clear “fever” boards to attack the other player after a certain amount of time. Tetris is at a clear advantage because it’s easier to figure out which way to turn a Tetrimino than it is to clear an entire board of Puyos with one trigger. Party is a simple “highest score wins” mode with either mini-Puyos or normal Tetris. Each can attack or slow down the others with items on the board, but these items are quickly buried by blocks and are random. You also have to go for the highest score and can’t play this in a survival setting since all players will have infinite lives.

Puyo Puyo Tetris’ multiplayer modes all support up to four players. As fun as they are, they become furious junkfests with your chance of survival dwindling as the game progresses. This chaos makes Puyo Puyo Tetris an excellent party game, even if your guests don’t understand the concept of either modes. There are quick lessons in game to help you and your friends hone your skills, or even grasp the basic rules. Fusion, for example, was confusing at first, but after a 2 minutes tutorial from lessons, we grasped the basic concepts and began chaining our way to victory.

Puyo Puyo Tetris offers an awesome package for its value. While some fusions of games leave you with an inadequate version of both games, Puyo Puyo Tetris leaves you with both a thrilling and balanced Puyo Puyo and an exciting Tetris. The two modes come together in surprising harmony, and I’d love to see competitive puzzle games become more popular in the west as a result.

Puyo Puyo Tetris is a perfect blend of both Puyo Puyo and Tetris and gives us our first Puyo Puyo game in over ten years and while some of its modes aren’t as thrilling, the new modes offer an exciting new take on the competitive puzzle genre.

Sean Anthony likes to combine two of his passions: gaming and writing. Gaming has been a huge part of his life ever since he played his first game as a child, Kirby's Adventure. He aspires to have his name attached to an article that makes the whole world go, "Huh, that's neat, I guess."
Related Articles: Puyo Puyo Tetris
Share
Tweet
Share
Submit