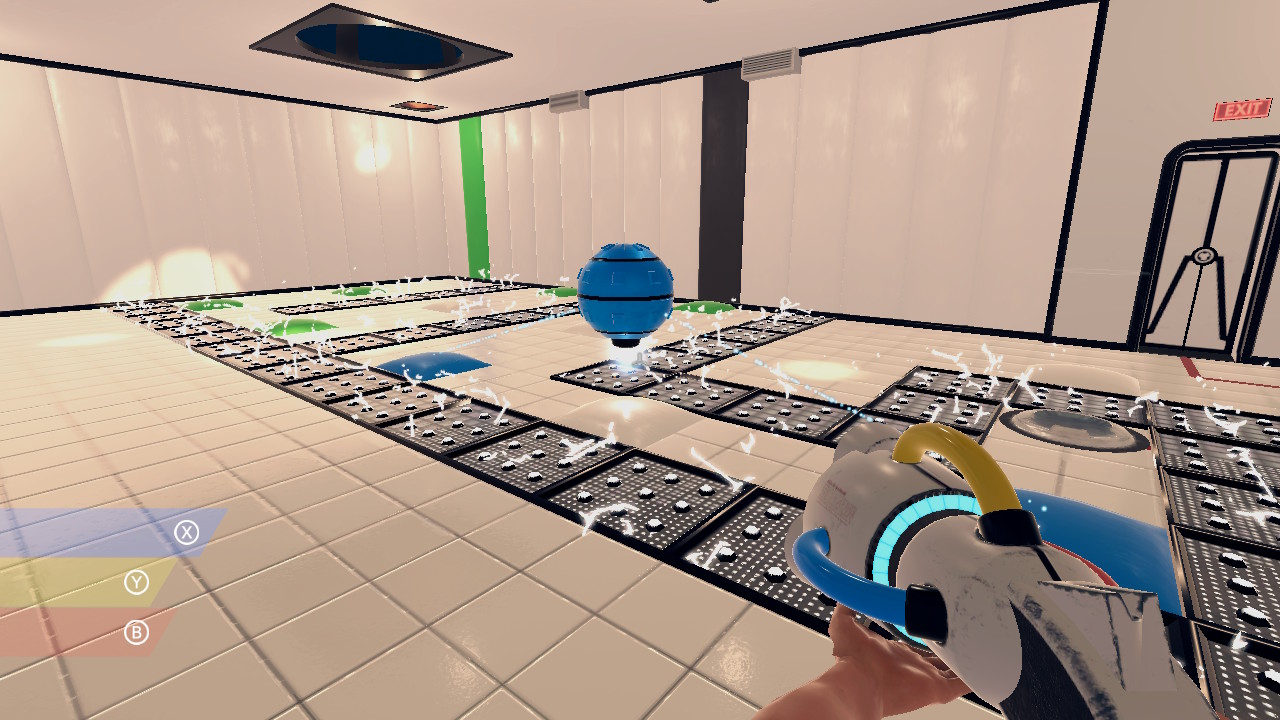 When writing reviews, I try not to define one game in terms of another that the reader may or may not have played. These days, this is most often done with Dark Souls (for examples, look at the “It’s Like Dark Souls” Twitter account); having not played it myself, I find little meaning in that comparison. Despite this, I feel it would be remiss of me to write this review of ChromaGun without mentioning Portal, as it is staggeringly similar in many ways:

One wouldn’t be blamed for thinking that something with so many similarities to a critically acclaimed title, albeit one from over a decade ago, would be an utterly fantastic game in its own right. Unfortunately, that would be an incorrect assumption. ChromaGun had a lot of potential. It has a bunch of legitimately clever puzzles, but it also has some major game design flaws that hold it back.

“As you have just passed the 50% mark on completion of the test, we feel it’s time to reveal a sad truth. Due to a recent…slightly massive drop in ChromaTec stock, we will be unable to pay you at the end of the test. Compensation will be handed out in the form of cheap homemade confetti.”

Before I talk about those flaws, though, I should describe how it works. Your gun can fire three different colors of paint, one at a time. This paint has a sort of magnetic quality to it, where surfaces covered in a given paint color draw floating objects of the same color toward them. If multiple surfaces in different spots are painted, the object will be pulled toward both and stop in the middle. If you mix one primary color with another, you’ll get the color you expect (blue and yellow make green, etc.). Typically, you need to manipulate various colored objects into specific spots by putting the right color of paint on the right surface, pulling the objects into place. Once you have put everything in just the right spot, you can advance to the next puzzle. Some objects remain stationary until your paint pulls them in a specific direction, while others will constantly chase you and try to kill you as soon as they enter your line of sight.

Some rooms have electrified floor tiles that will instantly kill you if you so much as look at them too closely, and they’ll also destroy the objects you need to use to solve puzzles. Sometimes, you need to destroy certain objects as a part of solving the puzzle, because when an object is destroyed, it deactivates a few of those electrified floor tiles. Other rooms have odd gelatinous-looking walls that solid objects, including yourself, can’t pass through, but these walls allow your paint to shoot straight through.

The game is divided into eight chapters, each containing six or seven floors, for a total of over 50 stages. Some stages have multiple relatively simple puzzles, while others contain only one that’s more intricate than those on the multi-puzzle floors. This is where the problems begin. The major design flaws I mentioned earlier all follow a similar theme: punishing the player harshly for not getting the solution to the puzzle exactly right the first time. If you accidentally destroy an object that you weren’t supposed to destroy in order to complete the puzzle, it will not respawn. Your only course of action at that point is to restart the entire floor, which can be particularly frustrating if you’re near the end of an intricate puzzle, or if you’re on the last puzzle of a multi-puzzle floor where the first few were incredibly easy. Similarly, you can only put two colors of paint on any given surface. If you try to paint a surface again after getting to orange, green, or purple, it will turn black and become unpaintable, often making the puzzle unsolvable. These instances are nothing but padding—they increase the amount of time you spend playing the game, but the extra time spent would not qualify as added entertainment by any reasonable standard.

And the worst part is that these problems would have been so easy to avoid! If an object is needed for a puzzle’s solution, make it respawn if destroyed. Portal did that. Make black walls re-paintable as if they were white, or add an instant paint thinner function to the gun. Portal didn’t place limits on how often you could put portals on the same walls. The game developers seem to have overlooked these important details from the very game they were trying so hard to imitate. A few simple changes would have made a huge difference in my enjoyment of the game. Even just adding checkpoints on multi-puzzle floors would be a great boon. This game has already been released on other systems, so the developers have had ample opportunity to fix these issues, but they haven’t done so. There seem to be few if any version differences for the Switch port. Adding in Amiibo support for Splatoon figures would have made sense in my opinion because the Inklings’ guns shoot various colors of ink, just like the ChromaGun’s paint, but unfortunately, this port missed that opportunity. In addition, there aren’t any motion-based aiming options. On the whole, motion controls are a mixed bag, but aiming projectiles is widely seen as the best use for them because of the added quickness and precision compared to simple dual analog, so I’m sure some players would have enjoyed having the option to choose between motion controls and dual analog.

The graphics are pretty good for an indie game, and the sound design is okay. The music, on the other hand, is not used well. The vast majority of the game uses one song on a constant loop, which gets stale very quickly and only added to my frustration while playing. As I said previously, this game does have a number of well-designed puzzles that I enjoyed solving, but whenever a single tiny mistake made a puzzle unsolvable, all of that enjoyment evaporated in an instant.

ChromaGun answers a question nobody wanted answered: What if Portal made a few really terrible game design decisions that soured the whole experience? Don’t get me wrong, ChromaGun is not without enjoyment. It certainly has its moments. At $19.99, it may be worth buying. But it could have been so much better.

Kyle is an unashamed longtime Nintendo fanboy. Some of his earliest and fondest memories are of playing Super Mario Bros. 3 on the NES with his grandmother. His favorite series are Fire Emblem and Metroid. Outside of gaming, Kyle is also a serious Whovian, favoring the Seventh Doctor and Ace as his preferred Doctor and companion. He also loves superhero movies, power metal music, and basically anything in the space fantasy genre. Avatar by Smashley (@SmashleyDraws on Twitter).
Related Articles: ChromaGun
Share
Tweet
Share
Submit