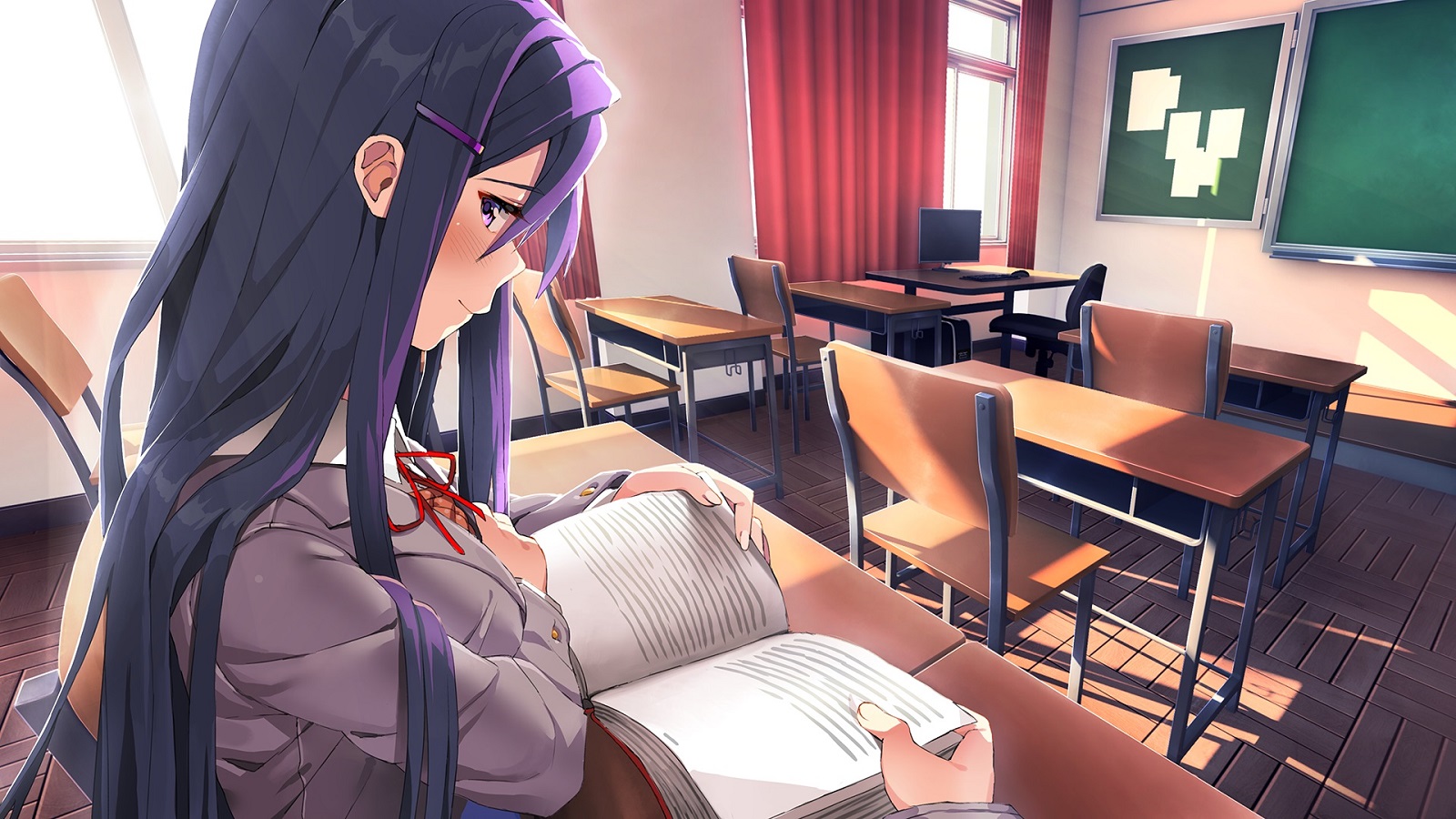 For four years, Doki Doki Literature Club! was left to fester in the public consciousness. It would be an understatement to say that, during this time, its twists, tricks, and outright nightmarish scenes have become infamous. Now experiencing the game again years later, I’m reminded of how phenomenal its storytelling was, its idiosyncrasies aside. While there’s no surprise that the twists remain at the forefront of the discussion, it’d be a waste to ignore the myriad aspects the game nails just as well. Perhaps its best trick was convincing a generation of uninterested western gamers to dip their toes into the genre. Doki Doki Literature Club! wasn’t great because it defied what visual novels were, but because it had mastery over the storytelling tools afforded by them. It’s both a celebration of the genre and a deep dive into the potential of interactive fiction.

With Doki Doki Literature Club Plus!, we’re given the chance to appreciate the hidden beauty of the narrative that we may have missed before. After all, catching every player off guard the same way it did four years ago just isn’t on the table anymore, on account of its notoriety. Even in its marketing material, the definitive edition is being branded as a psychological horror game. And, in making the game more accessible to console players, a few obvious tweaks had to be made. (For the sake of a spoiler-free review, I won’t go into too much detail.) Fans might see this as a reason for concern, but my time in Plus! has shown me that my concern was largely unfounded. It’s hard to ignore the sting of saudade when those critical moments come around, though it’s largely made up for with new content and fresh packaging. 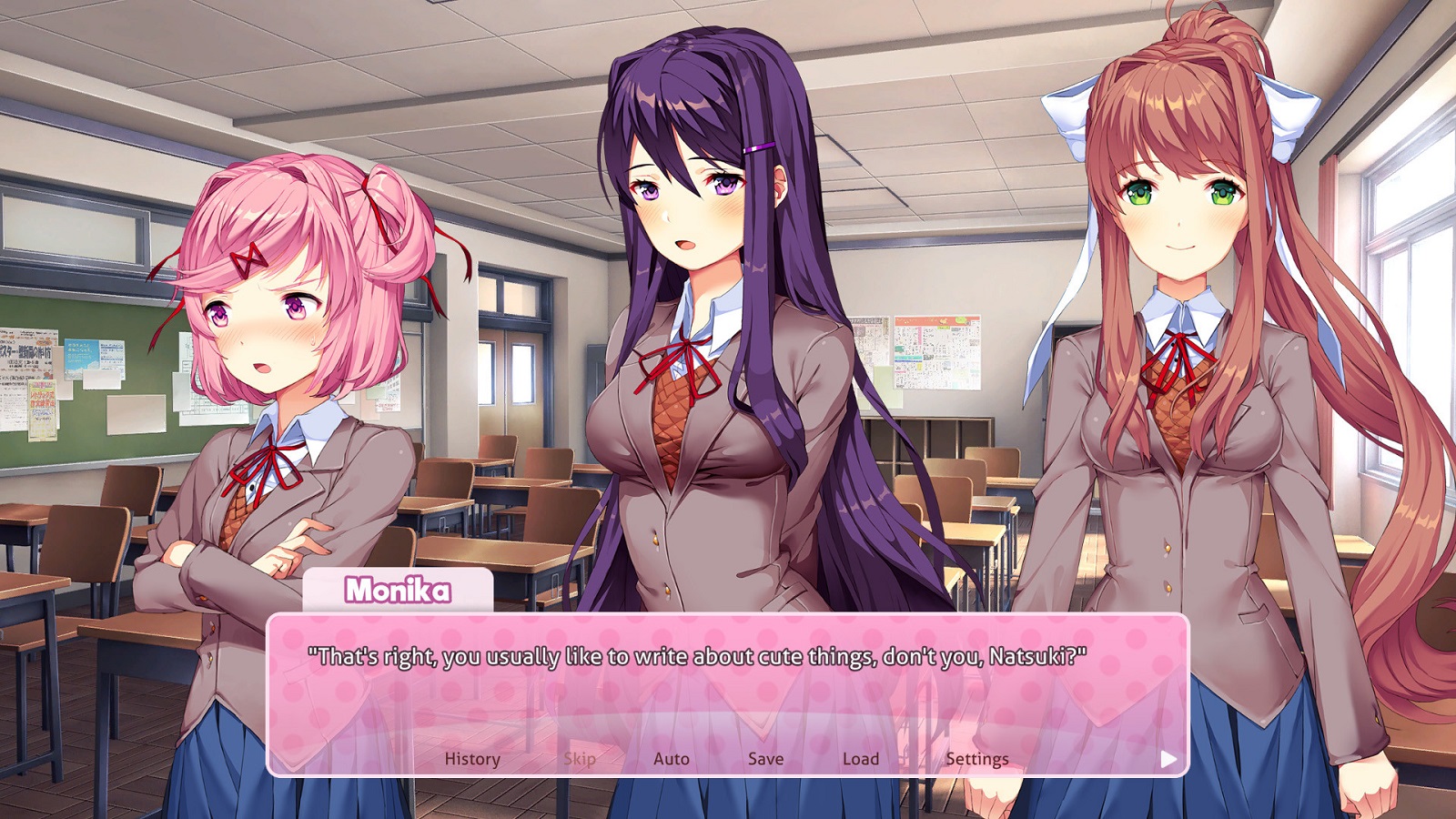 The first rule of Literature Club…

For the uninitiated, the story of Doki Doki Literature Club! leans on tropes heavily in its first half. It centers on the titular high school club, which your unwilling player-character is reluctant to join until your childhood friend Sayori drags you through the door. Over the next few days, you grow ever closer to the cast of characters, reciting poetry, prepping for events, and other clubroom antics. Alongside genki girl Sayori, there’s Monika, the club president; Natsuki, the resident tsundere; and Yuri, the shy one. The game lulls you into a false sense of security with its sugary-sweet atmosphere and an upbeat soundtrack. You’re easily sold on its bright, bubbly, and whimsical presentation of a trope-y story with trope-y characters.

Every day, you write poetry by selecting 20 keywords from a random pool of options. Sayori, Natsuki, and Yuri have affinities for different words, and so you can tailor your poems for certain characters. At the club meetings, members exchange poems and get to know one another through their work. Each character has their own voice, handwriting, and personal challenges to overcome. Beyond poems, the decisions you make throughout Doki Doki Literature Club are few and far between, but each one opens the door to unique events. It’s well worth trialing each option, if not for new music or CGs, then for a few more nuggets of story.

It’s easy to dismiss the dialogue when the game layers the tropes on thick. But if there’s anything you can count on, it’s Doki Doki Literature Club!’s constant need to toy with player expectations. Beneath a deliberate veil of tropes and red herrings is a strong, sincere script chock-full of raw emotion and nuance. It’s supported by a smorgasbord of tricks; maybe there’s a little visual aberration in the corner of your eye or off-key music correcting itself just as you begin to take notice. Gorgeous, detailed art and absolutely stellar sound design steal the show on multiple occasions. The UI itself becomes the game’s plaything to complement the roller-coaster of narrative beats. It weaponizes anything and everything in service of creating atmosphere and selling emotion. It’s the details that make you fall in love with a game, and Doki Doki Literature Club! is as meticulous as they come. 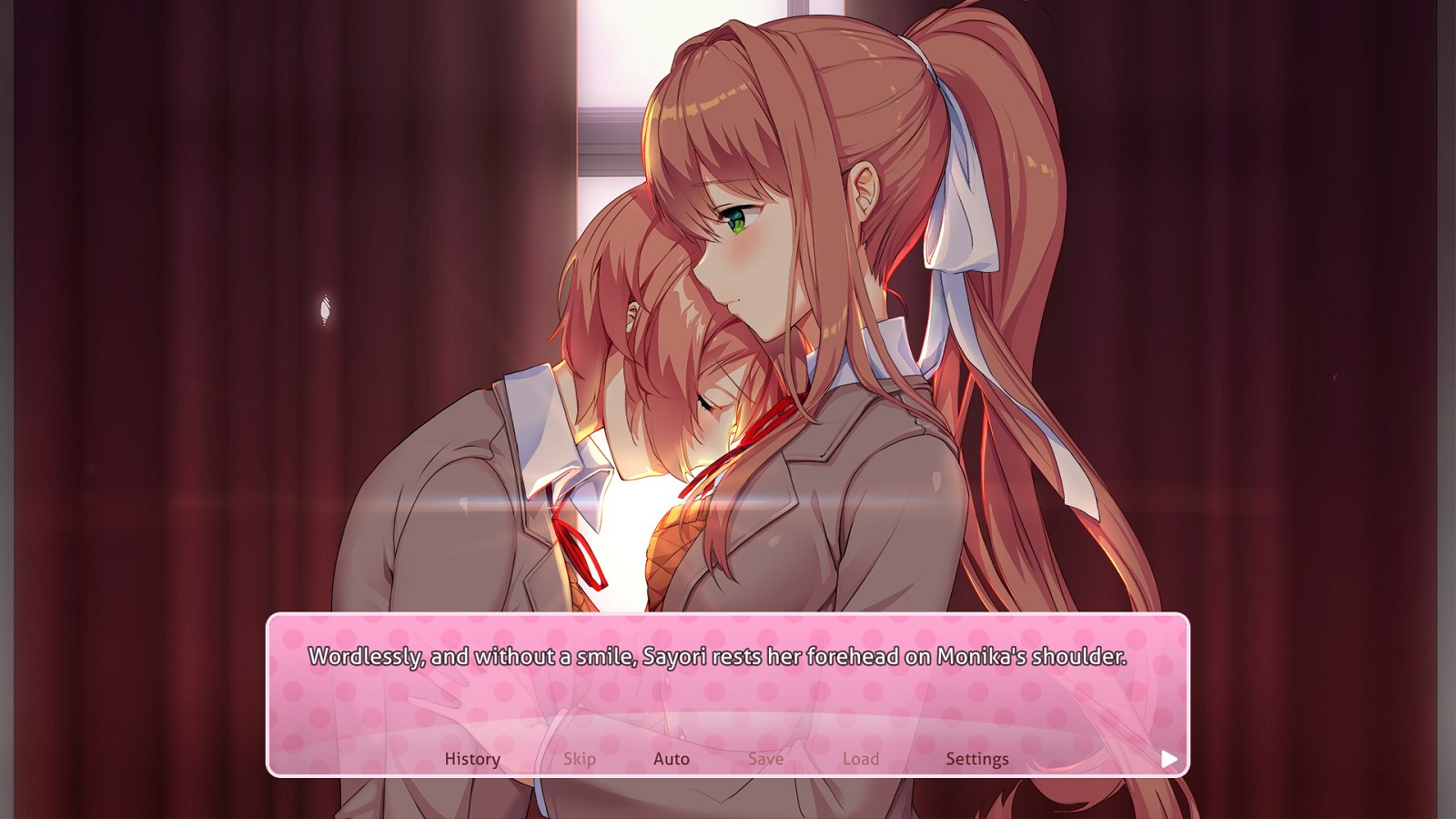 New mission: collect all the art.

The game juggles all these quirky design tricks, but it never gets carried away. Carrying everything on their backs are the characters, the lifeblood of the narrative. This is made abundantly clear in Plus! with the addition of unlockable side stories. There are six in all, split into two parts each, giving you some insight into the characters as they work to overcome the growing pains of their new club. Together, they make up a sort of alternate-reality prequel that spans a handful of hours. No wild twists, no new mechanics — just opportunities to flesh out the game’s characters. Each one explores the dynamics of the characters touched on in the base game. This chain of side stories proves that Doki Doki Literature Club isn’t just its twists — compelling characters, strong writing, and remarkable pacing run the show here. A fresh batch of CGs and composer Nikki Kaelar’s new soundtrack packaged inside don’t hurt either.

The gallery stores every unique poem, song, and artwork, and more unlockables should you decide to explore every path available to you. Beyond being a menu to gawk at all the new and updated artwork, the gallery is a constant reminder that there’s always more to discover. And, with an enthralling universe housing a good amount of content, I was always up to the task. There’s a veritable treasure trove of secrets and easter eggs that grows even bigger with Plus! Emails, for example, are a new flavor of collectibles and add a new dimension to the lore hunt. A fair bit of content escaped me despite multiple playthroughs, so I can’t even say how many extra secrets are hiding inside the definitive version. 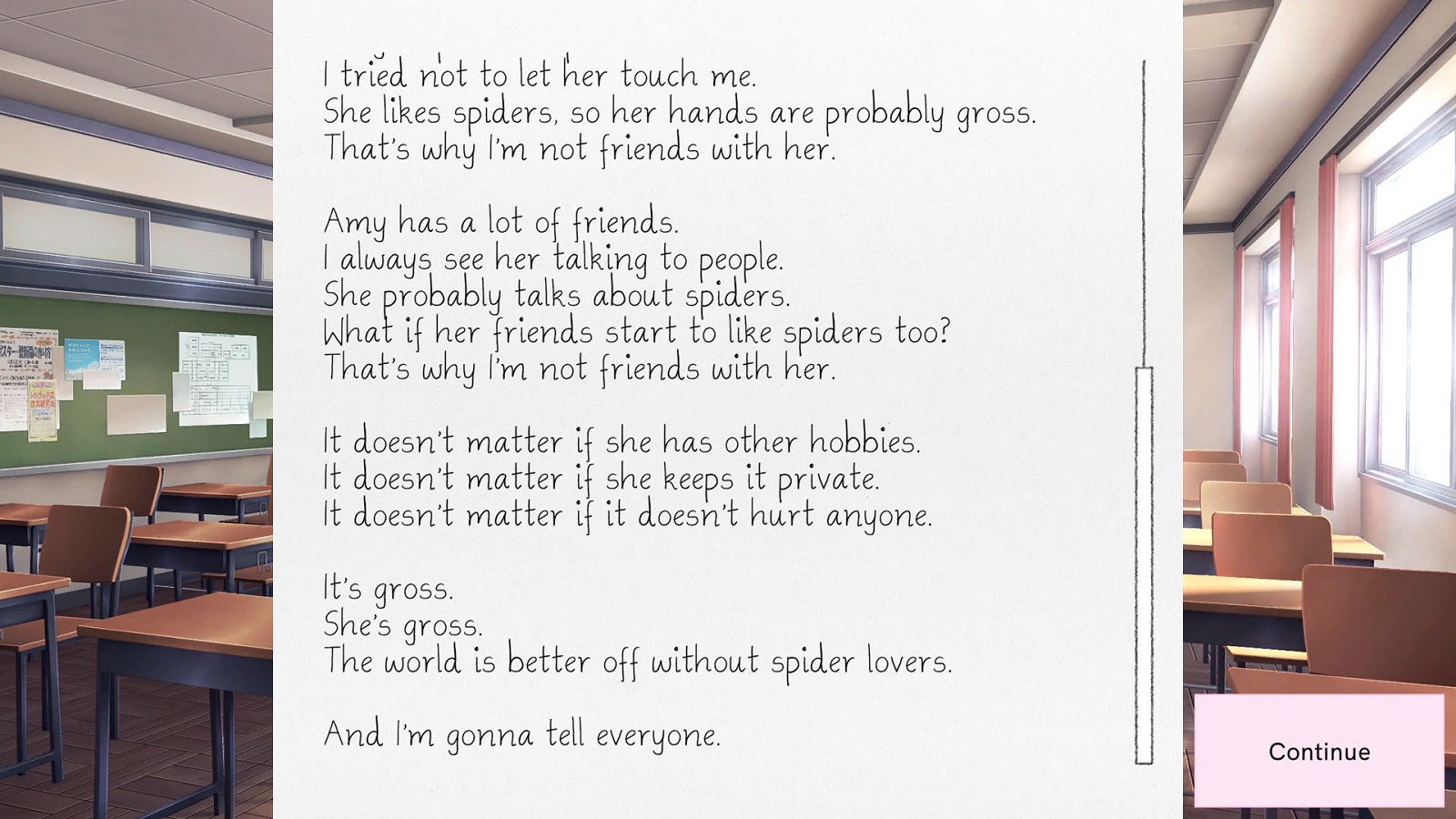 A poem a day keeps the nightmares away.

Doki Doki Literature Club Plus! is an updated version of a modern classic that retains most if not all of the original’s impact. Out of necessity, a few modifications are made for the benefit of a new audience, though fans might still yearn for that initial experience from four years ago. While it does give up a touch of its original charm, the new content will have you falling in love with all these other facets of the game you might have overlooked before. A host of new collectibles and a brand-new story are more than enough to make your return to the literature club worthwhile. It’s a great visual novel made better.

Doki Doki Literature Club Plus! is both a celebration of visual novels and a deep dive into the potential of interactive fiction. This updated version introduces new content that continues to weaponize the game’s mastery over the visual novel format to land even more emotional gut punches.

A self-deprecating, overly sarcastic pair of glasses that occasionally possesses a human host in order to partake in the delightful process of playing video games, then immediately complaining about them. When he is not playing games (a rare occurrence), he can be found either writing about things that no one cares about, or haunting the quiet streets of his Canadian suburb.
Related Articles: Doki Doki Literature Club, Doki Doki Literature Club Plus, Indies
Share
Tweet
Share
Submit