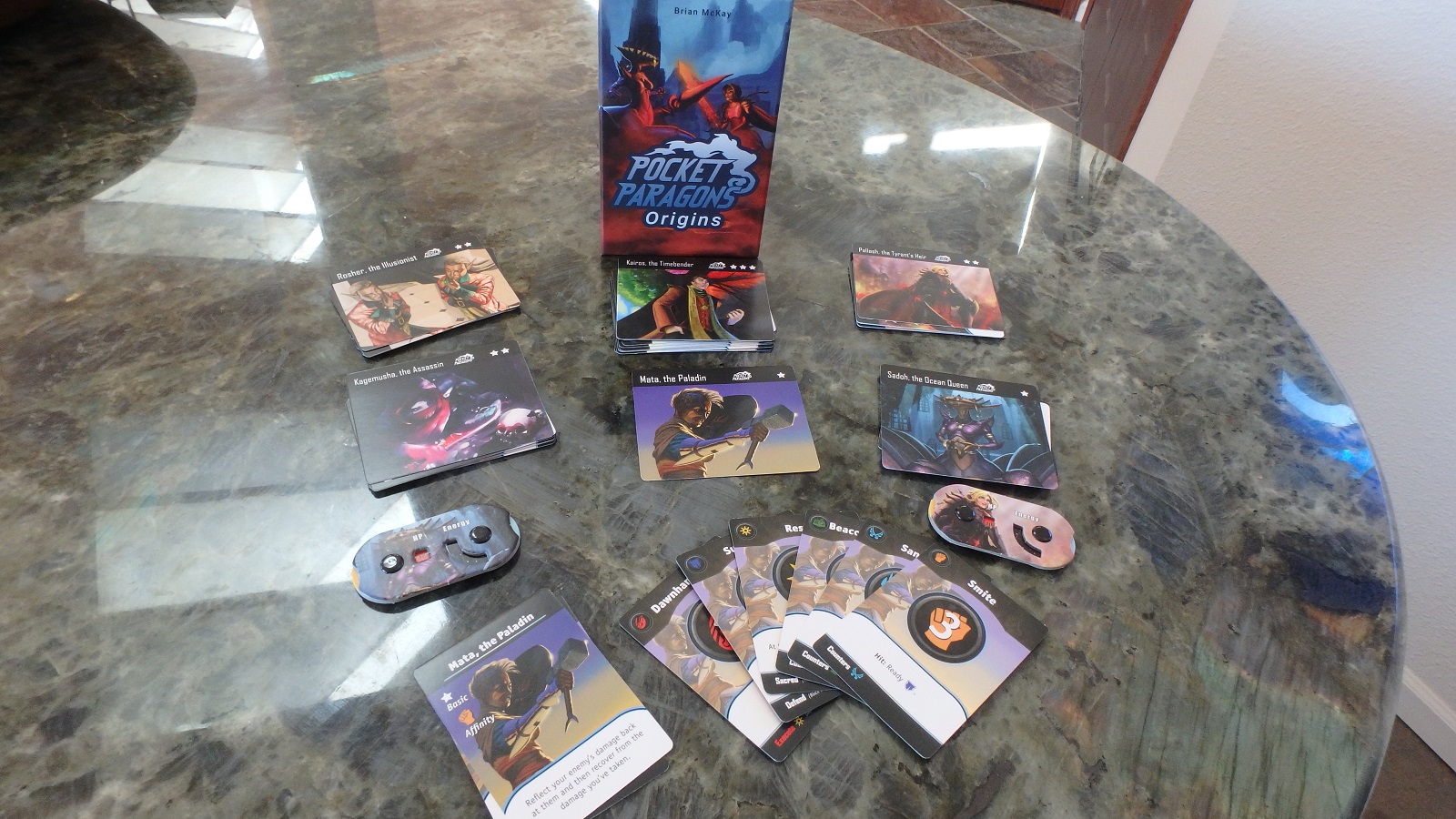 We all know the struggle; you’re at a board game meetup, and you and another person are left in the awkward position of having fifteen minutes or so before a new game opens up. What do you do? Futz around on your phone and run the risk of looking disinterested and antisocial? Or do you creep around other games that are in progress in a strange act of gaming voyeurism? Worst yet, do you strike up an actual conversation and seriously attempt to talk to another flesh and blood human being, like it’s the nineties or something? Well worry not, because Pocket Paragons has come along and filled the void of two player microgames in a way nothing else has come close to.

The first part of what makes Pocket Paragons so good is the simplicity of its rules; at its core, Pocket Paragons is just fancy rock, paper, scissors. Characters start the game with six basic actions and can potentially unlock their ultimate over the course of a match, and the three attacks are rock, paper, scissors, with each countering another while simultaneously being susceptible to the other. Additionally, players have a block card which will straightforwardly block incoming damage, a rest card which will allow them to retrieve their discards, and an assassination, wich will instagib a resting character. Ultimates unlock with energy, obtained by successful counters (winning r/p/s) and rests. Each character’s cards will have unique effects and damage numbers which throw a wrench into the works, but you’re already ready to play a game with the beginner characters after reading those past few sentences.

Another way that Pocket Paragons excels is with its learning curve. The two beginner characters are rather forgiving, with plenty of defense and healing, while still being engaging, but the difficulty of playing both with and against more advanced characters will ramp up as stances, extra executes, and fake-outs are introduced. But even at its most complicated, Pocket Paragons is still an extremely approachable game, since it never strays too far from its original concept.

Initially, I wished that I had access to an in depth reference card for what my opponent’s cards did, but I quickly realized that it would be counterproductive. Pocket Paragons’ genius is somewhat shallow; if you delve too deep, you’ll probably be left wanting. Instead, play Pocket Paragons with your instincts, your gut, your first guess, and you’ll be rewarded with way more fun than a 5-15 minute game has any right to contain. Too much analysis leaves assassinations feel like overpowered bad beats, but when both players are flying by the seat of their pants, they simply provoke a groan, laugh, and reset.

And that’s it. Despite how much I legitimately adore Pocket Paragons, there isn’t too much more for me to say about it; its simplicity and quickness keeps me from waxing lyrical about it for too long. Bottom line, Pocket Paragons has far surpassed the bar for permanent filler spots in my game bag, a high honor currently only held by Coup and One Night Werewolf.

Pocket Paragons: Origins immediately won me over with its simple ruleset and quick playtime. My first play session lasted an hour and a half, and any five-minute microgame that still holds its own after being played for over an hour straight deserves praise in my book. The production quality isn’t exactly anything to write home about, but I am more than willing to overlook mediocre art and cheap components in a game this cheap and this good.

Nick grew up reading fantasy novels and board game rules for fun, so he accepted he was a dork at an early age. When he's not busy researching the intricacies of a hobby he'll never pick up, Nick can be caught attempting to either cook an edible meal or befriend local crows.
Related Articles: Pocket Paragons, Tabletop
Share
Tweet
Share
Submit