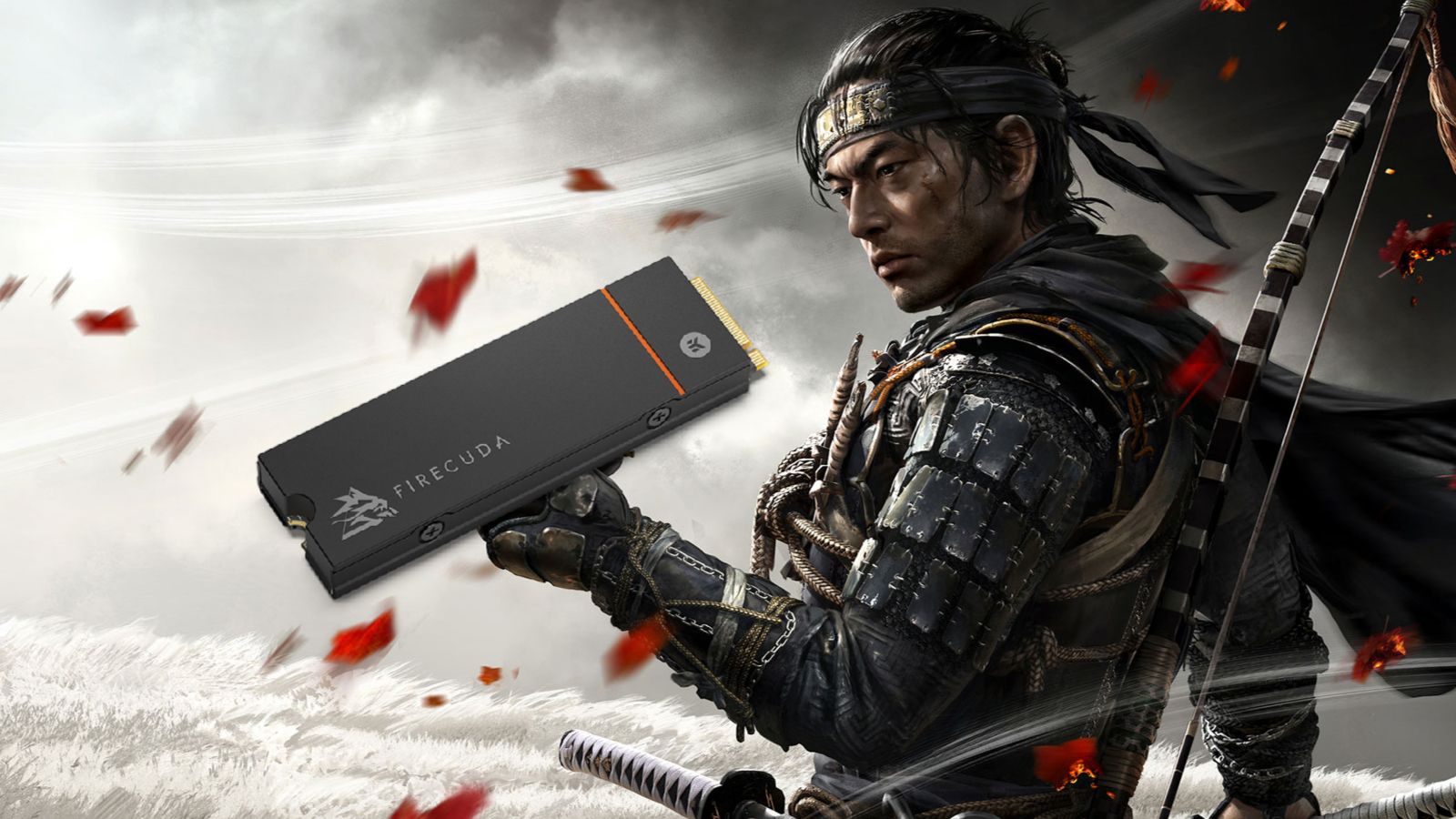 If you’ve read my tech reviews for a while, you know I’m high on Seagate. Their stuff consistently delivers what they advertise on the box, and they back it with a solid 3 warranty to keep it that way. We’ve gotten our hands on the brand new Seagate FireCuda 530 m.2 NVMe — one of the first and only drives certified as fast enough to run as secondary storage for the PlayStation 5. Today we are going to crack open Sony’s new console, install this drive, and see if it lives up to its promise.

First off, you won’t be able to utilize an expansion drive of any kind without getting your hands on the PlayStation 5 OS Update 2.0. As of writing, it’s still in invite-only beta, so fingers crossed if you want to try this before it goes official. That said, you’ll need that before you do anything else — attempting to install the drive will simply have the system prompt you that you need to power down and remove it. 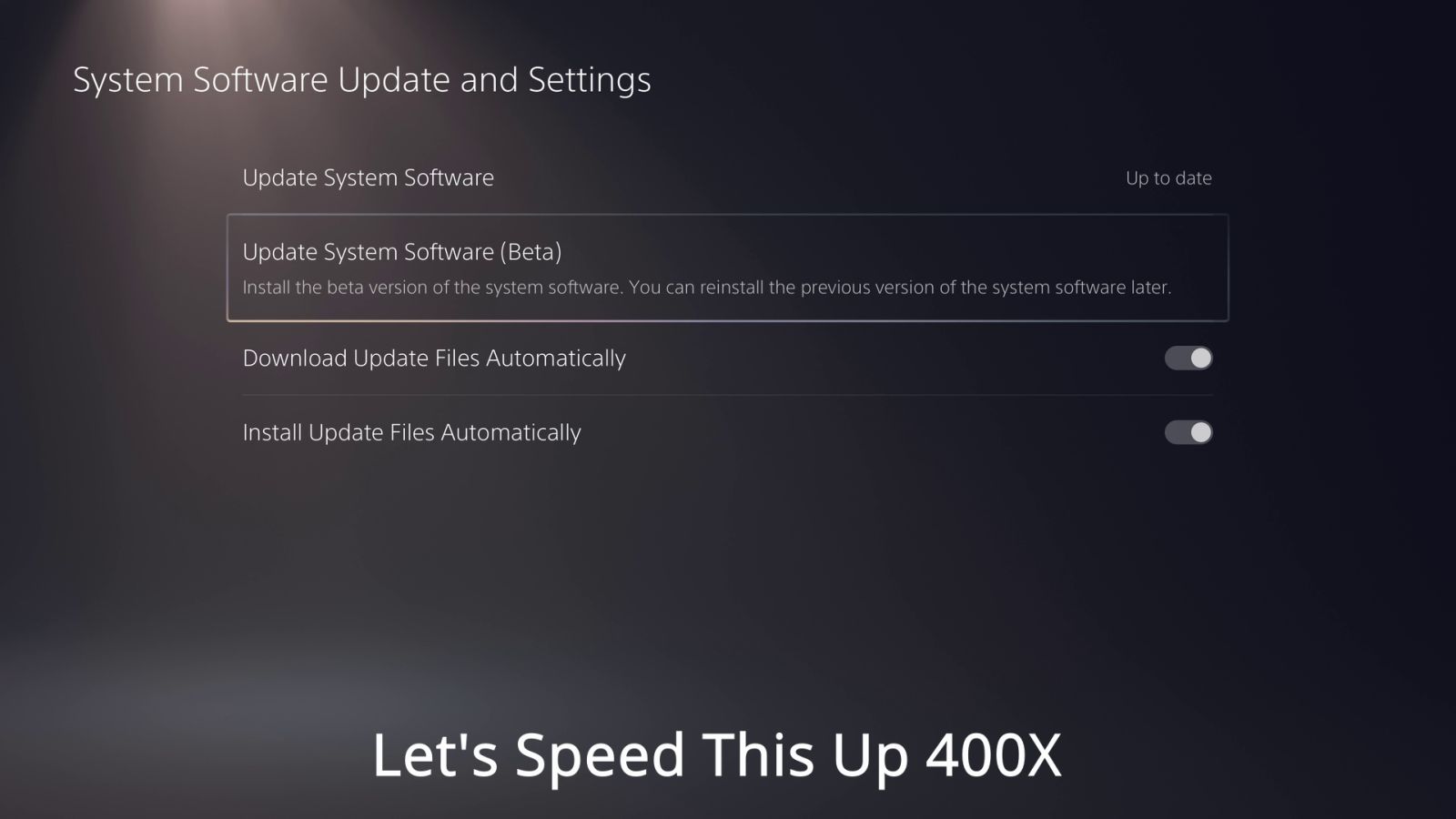 Installing the OS is simple. Heading into the System Software Update and Settings, you’ll find the usual “Update System Software”, and just below it the same thing but appended with the word “Beta”. Select that and you’ll get the patch notes for this update. In the patch notes are the instructions, but I’ve got you — check out this video below.

The PlayStation 5’s 2.0 update supports up to 2TB drives, as long as they meet specific criteria. The drive must have a read speed of 5,500 MB/s or faster, and it must also have either a built in heatsink, or you’ll need to attach one.

I’ve seen entirely too many videos where the person simply yanks upwards on the side plate. This is a surefire way to end up on Amazon ordering replacements. Instead, try to contain your excitement and follow these instructions. Find the bottom where the disc drive is and go to the opposite corner. Lift gently on that corner and then slide the plate towards the bottom. The side plate should very easily pop free without the need to yank on it in any way. A small child could open this system, so don’t yank.

How to Upgrade the PS5 storage with a FireCuda 530 m.2 SSD [Gaming Trend]

The FireCuda 530 I installed doesn’t have a heatsink, though there are models that do, so I picked up a double-sided one to ensure the drive stays cool. Before you think this is unnecessary, I did actually do a quick test on temperatures without it. Without a heat sink the drive will heat up to over 140 degrees Fahrenheit with the side plate and cover removed. That sort of temperature sustained will drastically shorten the life of the drive, as well as causing thermal throttling, so it’s very much recommended that you run with a heatsink. With the heatsink installed that temperature dropped to around 100 Fahrenheit when running games like Ratchet & Clank for over an hour, with idle temps being far lower. Normal operating temps are safe up to around 185 degrees Fahrenheit, but cooler is always better.

With the side plate open, you’ll see the large cooling fan, as well as a small silver cover. Open this cover to reveal the m.2 interface. Another small screw lies in the 110 position with a holdoff lying underneath it. Remove both and place the holdoff in the 80 slot. The Seagate 530 will fit into the exposed slot, though you won’t place it all the way to the bottom — there’s a 1-2mm gap between the bottom and the connector. Inserting the stick requires almost no force whatsoever and will cause the entire unit to suddenly pop up to a 45 degree angle. This is normal. Carefully pushing the chip down, you’ll secure it with the screw, with the holdoff providing the spacing needed. Replace the plates and the side panel and you are ready to boot up and roll. 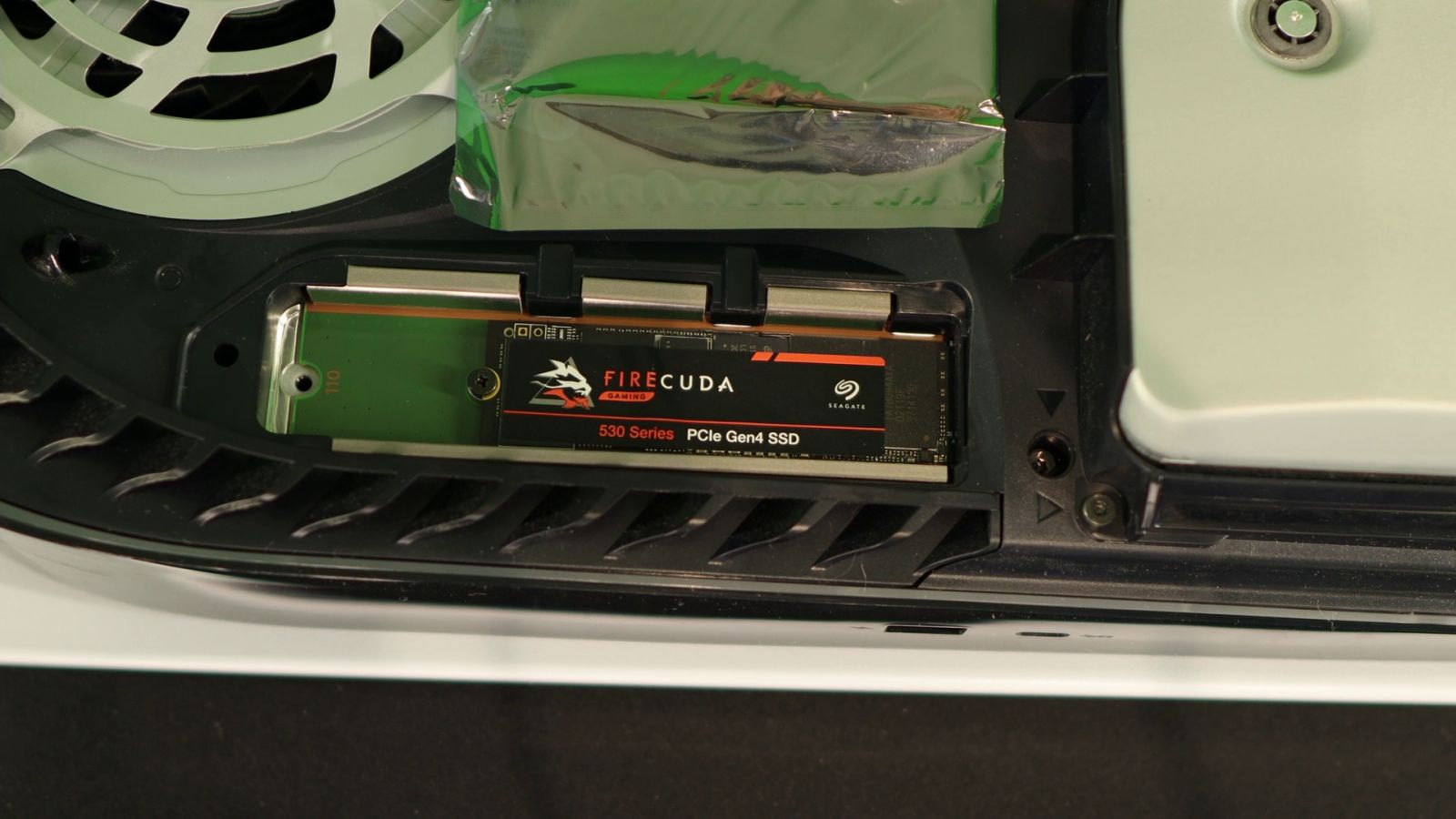 The system will immediately prompt that the drive you’ve inserted will need to be formatted before it can be used. It will proceed to do this, and then run a Read Speed test. In this case, the FireCuda 530 came back at 6556.59 MB/s — over a gig per second faster than it needs to be to operate in the system.

Settings -> Storage -> Installation to change where your system installs games, and it’s separated by PlayStation 4 and PlayStation 5 apps and games, should you wish to keep them separated. The drives operate independently rather than an extended logical unit. As such, the first thing I tested was copying a game to it — Returnal.

Returnal is 55.56 GB in size, and normally that’d take upwards of 10 minutes or longer to copy on a mechanical drive like the one on the PlayStation 4. Here that same copy took just 41 seconds. 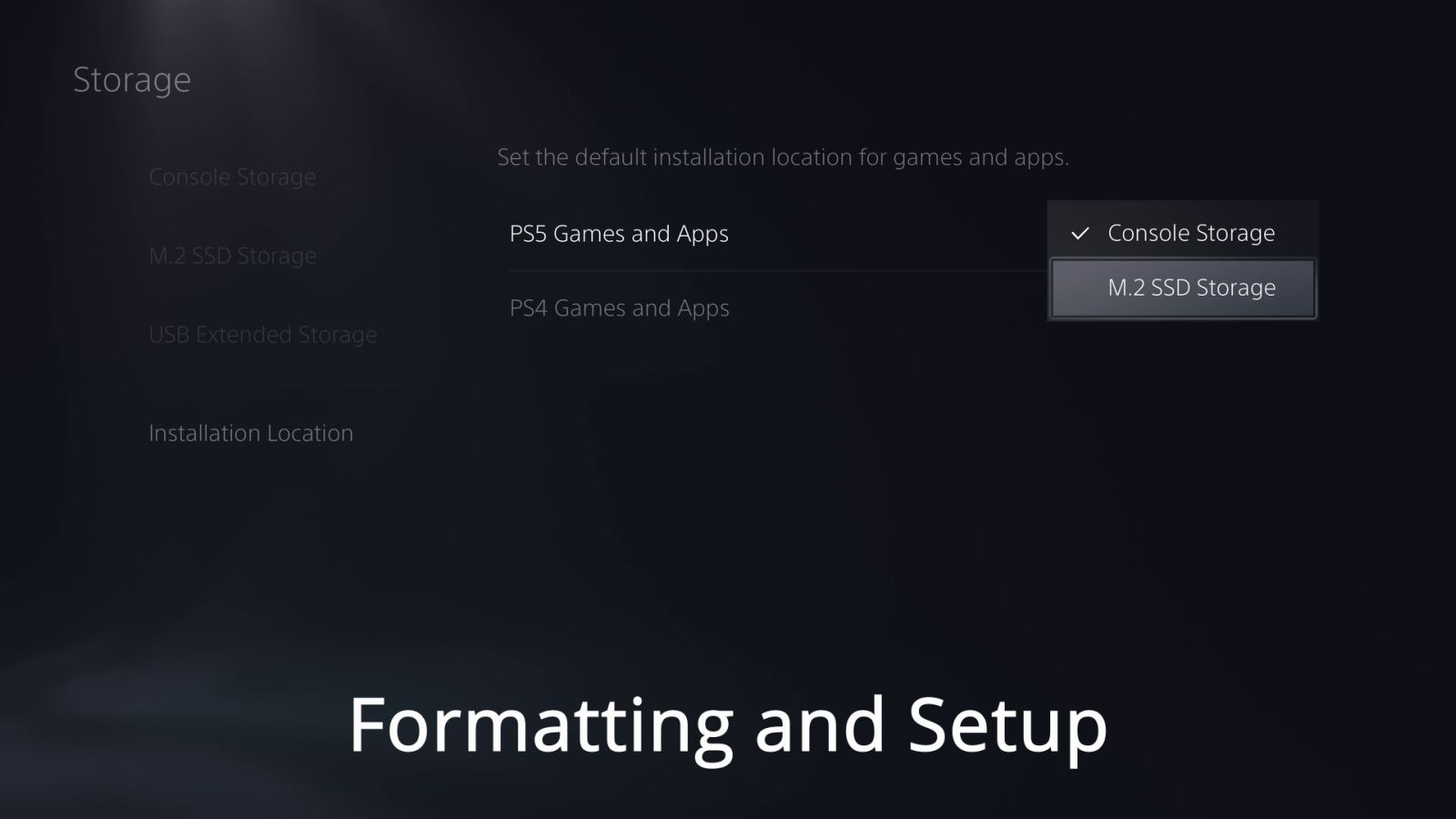 Testing game load speed is probably what you came here for, so let’s get to that. First up, I tried Remedy’s Control. The internal drive that shipped with the console loaded the game 0.5 seconds slower than the FireCuda 530. Similarly, loading up A Plague Tale: Innocence was one second faster on the FireCuda than the original internal drive. Returnal, Ratchet & Clank, and The Outer Worlds all fired up within a second of the stock drive. The largest gap came from The Witcher III: Wild Hunt. The stock drive took just over 48 seconds to boot from the main menu, with the Seagate FireCuda 530 loading it a full 3.5 seconds faster.

It’s no surprise that Seagate’s PCIe 4.0 drive delivers on everything it advertises, and it really underscores just how high quality the components of Sony’s console really are. Seagate is one of those companies that stands behind their gear so you can expect a three year warranty, with an included three years of Rescue Data Recovery Services.

There really is only one hitch with the FireCuda 530 — the price. Similarly specced competitors come in around $220, whereas the FireCuda 530 without a heatsink is $239, or $259 with one included. Regardless, both drives are being scalped to high heaven, so the real problem here is scarcity. Just like the PlayStation 5 itself, these will be hard to come by, but very much worth it.

The only wishlist item I had with the launch of the PlayStation 5 was a bit more storage space, and now it’s within reach for everyone. The Seagate FireCuda 530 delivers more than enough speed to handle anything the PlayStation 5 can throw at it. Now it’s time to stretch out and load more than a handful of games with some room to breathe.

Ron Burke is the Editor in Chief for Gaming Trend. Currently living in Fort Worth, Texas, Ron is an old-school gamer who enjoys CRPGs, action/adventure, platformers, music games, and has recently gotten into tabletop gaming. Ron is also a fourth degree black belt, with a Master's rank in Matsumura Seito Shōrin-ryū, Moo Duk Kwan Tang Soo Do, Universal Tang Soo Do Alliance, and International Tang Soo Do Federation. He also holds ranks in several other styles in his search to be a well-rounded fighter. Ron has been married to Gaming Trend Editor, Laura Burke, for 21 years. They have three dogs - Pazuzu (Irish Terrier), Atë, and Calliope (both Australian Kelpie/Pit Bull mixes).
Related Articles: Hardware, Seagate FireCuda 530
Share
Tweet
Share
Submit